Nephrogenic diabetes insipidus in a patient with lymphoma

Copyright: This is an open-access article distributed under the terms of the Creative Commons Attribution License, which permits unrestricted use, distribution, and reproduction in any medium, provided the original author and source are credited. Copyright © 2019; Rollino C

Abnormal secretion or response to ADH (Anti Diuretic Hormone) is reported in cancer patients. Central diabetes insipidus may develop secondary to cancer invasion of one or more of the sites involved in ADH secretion: the hypothalamic osmoreceptors, the supraoptic or paraventricular nuclei, or the superior portion of the supraoptico hypophyseal tract [1]. Rarely nephrogenic diabetes insipidus may present as a paraneoplastic lesion [2]. We report the case of a patient who developed nephrogenic diabetes insipidus following an extensive invasion of the kidney tissue by lymphomatous cells in stage IVB T lymphoma.

At the beginning of May 2018, a 41-year-old woman underwent a clinical workup for sub occlusive intestinal crises; as CT evidenced gut wall thickening, especially in the ileum, and multiple mesenteric lymph nodes a diagnosis of Bowel Inflammatory Disease was made. The conditions of the patient worsened and on May 20th CT was repeated which showed free air and fluid in the abdomen and air-fluid levels. Moreover, large supraclavicular, mediastinal subcarinal, retrocrural, para aortic, omental and interaortocaval lymph nodes with a diameter over 20 mm and irregular hypodense areas of both kidneys (Figure 1), liver and pancreas were detected. On May 30th because of intestinal occlusion complicated by peritonitis the patient was submitted to urgent multiple small bowel resections. The histologic examination of the gut showed Non-Hodgkin Lymphoma (EATL: Enteropathy-associated T-cell lymphoma). Positron Emission Tomography evidenced multiple accumulations of the tracer in lymph nodes localized left in the neck, in supraclavicular, axillary, mediastinal, bilateral retrocrural, mesenteric, retroperitoneal and iliac sites, in both liver lobes, kidneys, and pancreas. No accumulation was evidenced in the brain. Nuclear Magnetic Resonance of the brain did not show any lesions. Bone biopsy was normal. T cell lymphoma stage IV B (CNS IPI 4) was diagnosed. Laboratory tests showed serum creatinine 0.6 mg/dl, uric acid 8 mg/dl, LDH 316 U/l, leukocytes 14230/mm3 (neutrophils 85%), gammaGT 612 U/ml, total proteins 5.2 g/dl, sodium 136 mEq/l, serum calcium 1.9 mmol/l, C Reactive Protein 21 mg/dl, no abnormalities of urinary sediment, no proteinuria. The patient was administered corticosteroids (dexamethasone 40 mg/day) for seven days with no benefit. On June 8th debulking chemiotherapy was started and the patients was given dexamethasone 20 mg, vincristin 1.4 mg/m2, adriblastin 50 mg/m2, cyclophoshamide 750 mg/m2 preliminary to a program of high-dose chemotherapy followed by a stem cell transplant.

Since the surgical intervention, the patient referred intense thirst and on top of parenteral nutrition, which was started on June 4th (2000 ml/day plus saline 1000 ml/day), the patient drank about 6 l per day. The volume of collected urine ranged from 8300 to 10000 ml/day. Plasma osmolarity resulted 371 mOsm/kg and urinary osmolarity 93 mOsm/kg. Being the ratio between plasma and urinary osmolarity over 2 and on the base of the entity of polyuria diabetes insipidus was diagnosed. Moreover glycosuria 4 g/day was detected.

The day after chemiotherapy infusion the patient reported a clear-cut reduction of thirst and polydipsia and in a few days the pattern of diabetes insipidus disappeared. 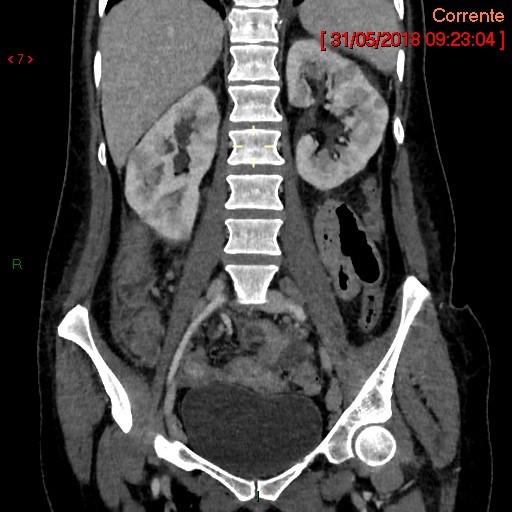 Disorders of free water balance may occur in the course of cancer. More frequently SIADH (Syndrome of Inappropriate AntiDiuretic Hormone Secretion) with inappropriate production of ADH giving rise to hyponatremia develops in the course of different kinds of neoplasia. The opposite situation, a low production of ADH, may occur in the course of cancers localized in the hypothalamus or posterior pituitary gland giving rise to diabetes insipidus. In this case the tendency to increase plasma osmolarity due to excessive fluid loss induces a compensatory polydipsia. Diabetes insipidus may also be due to an altered response of the kidney tubular collecting system to ADH, and it is then called nephrogenic diabetes insipidus. We could find only few reports of nephrogenic diabetes insipidus developing during malignant disease [2-4], probably because large areas of medullary renal tissue must be infiltrated to manifest a symptomatic resistance to ADH action, which happens only in diffuse or in late phase cancers.

In the case of our patient no lymphoma localizations in the brain were evidenced by Nuclear Magnetic Resonance, while CT showed diffuse extensive nodular hypodense renal lesions involving the renal medulla (Figure 1). The lymphocytic infiltration around the collecting tubules were presumably responsible for the decline in ADH responsiveness. The presence of glycosuria suggested possible multiple tubular defects. In that sense this case cannot be considered a paraneoplastic syndrome as paraneoplastic syndrome are not related to local invasion or metastases of a tumor. The severe conditions of the patient prevented to perform other tests, and the patient was transferred to a hematologic hospital in order to receive high-dose chemotherapy followed by a stem cell transplant. To discriminate between central and nephrogenic diabetes insipidus administration of ADH should have been given. The limit of this case report is represented by the fact that due to the poor clinical conditions of the patient the diagnosis of nephrogenic diabetes insipidus could not be confirmed as there were neither ADH measurement and ADH test nor a renal biopsy documenting a lymphocytic infiltration around the collecting tubules. However, after the first day of chemiotherapy the patient reported a clear-cut reduction of thirst and of polydipsia, and in a few days the pattern of diabetes insipidus disappeared, probably because of the reduction of the pathologic lesions in the kidneys. This is a rare case of a probable nephrogenic diabetes insipidus due to invasion of kidney tissue by lymphomatous cells.