Copyright: This is an open-access article distributed under the terms of the Creative Commons Attribution License, which permits unrestricted use, distribution, and reproduction in any medium, provided the original author and source are credited. Copyright © 2019; Jones C

Background:Metabolic acidosis in chronic kidney disease (CKD) is often treated with oral sodium bicarbonate. There is limited evidence around the effects of sodium bicarbonate on extracellular fluid and blood pressure in CKD.

Conclusions: Oral sodium bicarbonate has a biological effect and increases body water content, without evidence of a clinical consequence. This may reflect the fact that some of the ingested sodium is excreted in the urine.

Chronic metabolic acidosis is a common finding in patients with chronic kidney disease (CKD) and has been associated with a range of potential adverse consequences [1], including more rapid progression of CKD [2], an increased risk of death [3], impaired protein [4] and bone metabolism [5] and worsening hyperkalaemia [6]. Correction of the acidosis may ameliorate some of these metabolic effects [1]. In addition, oral bicarbonate supplementation in patients with CKD may delay progression of kidney disease [7]. For these reasons oral sodium bicarbonate is frequently prescribed to CKD patients and correction of serum bicarbonate to a level of ≥22 mmol/L is recommended in international guidelines [8].

However, worsening kidney function is also characterised by sodium and fluid retention. As well as causing peripheral or pulmonary oedema, sodium and water retention may exacerbate the hypertension that is a frequent complication of CKD. Hypertension in turn is associated with left ventricular hypertrophy and an increased risk of heart failure and sudden death, as well as being a risk factor for macrovascular diseases including coronary artery disease, cerebrovascular disease and peripheral vascular disease. There are therefore legitimate safety concerns around the administration of oral sodium bicarbonate to this patient group. A systematic review of six trials concluded that oral sodium bicarbonate “was not associated with a higher likelihood of initiating or escalating anti-hypertensive medications”, with no significant effect on systolic or diastolic blood pressure [9]. However in this study, the relative risk of initiating or escalating anti-hypertensive medications was 1.58, with confidence intervals of 0.53-4.74, reflecting the poor quality of the included trials. In a more recent study that randomised 188 subjects with stage 3/4 CKD to a mean oral sodium bicarbonate dose of 2.3 g/day or placebo 28.7% of actively treated subjects had worsening oedema as compared to 15% of controls and 35.1% vs 22.3% had worsening hypertension, differences that did not reach statistical significance [10]. There was a significant increase in the prescription of diuretics in the active treatment arm, implying clinical significance to these effects, and systolic and diastolic blood pressures were 4 and 2 mmHg higher respectively [10].

At present there is insufficient evidence on the effect of sodium bicarbonate on extracellular fluid and blood pressure control in CKD. We therefore conducted a prospective study to investigate the consequences of oral sodium bicarbonate loading on extracellular water, the body compartment that would be expected to expand if sodium retention occurred, and blood pressure.

Height, weight, office blood pressure, medication history and a clinical assessment for peripheral oedema were recorded at baseline and on day 28 of the study. Blood pressure was measured in the non-dominant arm after sitting for at least 5 minutes using a calibrated automated blood pressure machine. The average of three readings was recorded. Subjects were asked to complete a 3-day dietary diary for estimation of oral sodium intake. Blood was analysed for serum creatinine, electrolytes and venous bicarbonate. A 24-hour urine was collected for volume and sodium concentration. A tetrapolar bioelectric impedance measurement was taken for estimation of extracellular fluid volume (Vecf) and total body water (TBW). Blood and saliva samples were collected immediately before and 4 hours (blood) and 4, 5 and 6 hours (saliva) after ingestion of pre-prepared solutions of sodium bromide and deuterium oxide administered according to patient weight.

The bromide space (equivalent to Vecf) was calculated as:

Bromide ECF (l) = BrO / (Brpost - Brpre)where BrO is the oral bromide dose (g) and Brpost and Brpre the post and pre dose plasma bromide concentrations (g/l) respectively. The bromide space was corrected by a factor of 0.855 [11].

Total body water (TBW) was estimated by 2H2O dilution. The enrichment of 2H in body water (saliva samples) was measured by isotope ratio mass spectrometry pre- and at 4, 5 and 6 hours post- a 0.07 g/kg body weight oral dose of 2H2O. TBW is then derived:

where A is the oral dose (g) of isotope administered, and a is the amount (g) of the dose diluted for mass-spectrometric analysis in T (g) of tap water and Ea is the enrichment of the portion, Et is the enrichment of tap water, Es is the mean enrichment of the 4-6 hour post dose samples and Ep is enrichment of the pre-dose saliva sample [12]. Isotopic composition was determined by mass spectrometry, using platinum catalysed equilibration with hydrogen gas [13]. The study was approved by the Research Ethics Committee and all subjects gave signed informed consent. Statistical Methods and Sample Size. In the absence of meaningful data on which to base a power calculation, we estimated that 30 subjects per group would detect a significant difference in Vecf between normovolaemic and fluid overloaded patients with α of 0.1 and power 0.9, based on our previous observations of ECF/TBW ratios of <0.48 in normovolaemic subjects and of >0.50 in CKD and end-stage renal failure patients with hypervolaemia. The significance of differences between the active (bicarbonate) and placebo groups at week 4 was analysed by ANCOVA with week 0 (baseline) data as the covariate [14]. A value of <0.05 was taken as statistically significance. Randomisation was performed by an independent computerised process and identical active/placebo tablets were provided via the pharmacy department in pre-packed containers.

Thirty-nine patients completed the study. The study was ended before reaching the recruitment target because it was clear that this would not be achieved (Figure 1). Eighteen were randomised to active treatment (sodium bicarbonate) and 21 to placebo. One available deuterium result was not included in the analysis, because the result was clearly biologically impossible (TBW > actual weight). Table 1 shows the baseline characteristics of the study groups (mean and standard error of the mean (SEM). Patients randomised to the active treatment were significantly younger (64.1±2.6 yrs versus 73.4±2.2 yrs, p=0.009; non-paired t test), but there were no other significant differences between the 2 groups. The comparison of active and placebo groups at week 4 was therefore reanalysed adjusting for age as a second covariate. There was no difference in the mean number of blood pressure medications prescribed, class of blood pressure medications prescribed nor the use of diuretics between the 2 groups (table 2). 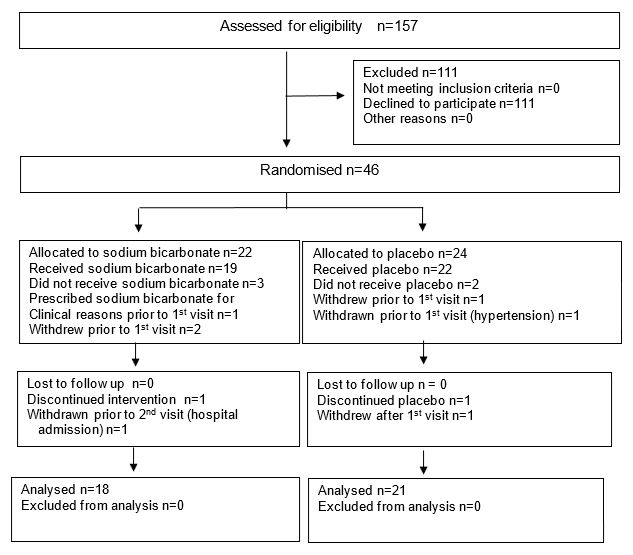 The findings in the active (sodium bicarbonate) treatment arm are limited by the small sample size. However venous bicarbonate increased, demonstrating that the active treatment was being taking and had a biological effect. Serum urea decreased, which is biologically plausible given that previous studies have suggested a decrease in protein catabolism with correction of acidosis. The urine sodium concentration increased significantly, although the observed increase in 24 hour urine sodium did not reach statistical significance. This suggests that the ingested sodium load is at least partly excreted in the urine, with no change in fluid intake (as estimated by 3-day food diary) or urine volume. This is consistent with animal data that show that intravenous sodium is retained when administered as a chloride salt, but excreted when administered as a bicarbonate salt [15]. Changes in extracellular water were inconsistent between the 2 measurement methods. However, the Vecf by bioimpedance and the TBW by both methods were significantly greater in the treatment than placebo arm at week 4, adjusting for the week 0 values. The Vecf as a ratio of TBW estimated by bioimpedance was greater in the treatment arm at week 4 when corrected for age, although this did not reach statistical significance. This correction for age is biologically relevant as it is known that the Vecf to TBW ratio changes with age. Despite these measured changes in TBW, there was no change in actual body weight. Blood pressure did not change significantly, but the mean difference in the change in systolic blood pressure between the treatment and placebo arms was +8.08 mmHg (95% confidence intervals -2.4 to +18.5). While the confidence interval crosses 0, this does raise the possibility of an effect on systolic blood pressure that would be biologically important in terms of cardiovascular risk. This difference in blood pressure is comparable to the findings in larger clinical trials [7,10]. One of these reported no change in blood pressure, but found that 61% of the treatment group had worsening hypertension compared to 48% of controls and 39% had worsening oedema leading to an increased diuretic dose, compared to 30% of controls [7]. While these differences did not reach statistical significance, a study of 134 subjects may not have been sufficiently powered to detect statistical significance.

Our results suggest that 4 weeks treatment of sodium bicarbonate in patients with CKD is associated with an increase in body water content. There was no statistically significant clinical consequence (increase in body weight or blood pressure), though the study may not have been sufficiently powered to detect such differences. This may at least in part reflect the fact that some of the ingested sodium load is excreted in the urine as suggested by an increased urine sodium concentration, although the change in 24 hour urine sodium excretion did not reach statistical significance. There were no changes in blood pressure medication (including diuretics) during the study period to account for the increased urinary sodium concentration or maintenance of actual weight or blood pressure.

Our findings provide further evidence that the beneficial effects of oral sodium bicarbonate in CKD may be obtained at a biological ‘price’. Clinicians prescribing sodium bicarbonate need to pay careful attention to blood pressure and look for evidence of fluid retention.

The Deuterium TBW measurements were conducted under the Medical Research Council Programme Number 5PT60. We acknowledge the support and cooperation of Dr Les Bluck from the Medical Research Council Human Nutrition Research Elsie Widdowson Laboratory, Cambridge, UK. Dr Bluck undertook the deuterium analyses and provided invaluable advice on the interpretation of these results. Dr Bluck died in May 2014 (Rapid Communications in Mass Spectrometry 2014, 28, 1777-1778). The study was sponsored by an unrestricted grant from the British Renal Society.