Copyright: This is an open-access article distributed under the terms of the Creative Commons Attribution License, which permits unrestricted use, distribution, and reproduction in any medium, provided the original author and source are credited. Copyright © 2020; Mehmet Sait Menzilcioglu

Kidney diseases are a common illness in worldwide. Many invasive and non-invasive methods are used to detect renal disease. Ultrasonic elastography (UE) is one of these techniques and a relatively new one. In this study, it is intended to determine whether is there a difference between medulla and cortex strain Ratio (SR) values in healthy individuals without renal disease. The study recruited 74 normal volunteers (26 males, 48 female subjects) with an average age of 43.46 ± 14.65 years (18-76). The SR values between the cortex and the medulla p value was 0,052. There was no significant difference between cortex and medulla SR values. There is no significant difference between the medulla and cortex values of healthy individuals who have undergone strain elastography, suggesting that the results of these studies are even more valuable.

Renal diseases are a common illness worldwide. In addition to benign diseases such as chronic kidney diseases, infections, storage diseases, malignant kidney diseases are also common. The prevalence of diseases such as chronic renal disease creates a major financial damage in developed countries [1-3]. Many invasive and non-invasive methods are used to detect renal disease. Researchers are trying to develop non-invasive methods instead of invasive methods. For instance, diffusion magnetic resonance imaging (DWMRI) is one of the techniques which fibrosis had used to show tumors. Ultrasonic elastography (UE) is one of these techniques and a relatively new one (4.5). Ultrasound elastography (UE) mainly provides information about the stiffness of the tissue. This provides an insight into tissue pathology according to the degree of hardness. UE is basically divided into two main groups. The first is strain elastography (SE), which yields a semi-quantitative value of the strain index (SI) and strain ratio (SR) by measuring the desired target tissue and referencing the adjacent tissue using a user-dependent compression technique. The second is acoustic radiation force pulse or share wave elastography (SWE), which provides a quantitative value in terms of the velocity of sound wave propagation in the tissue. These two methods have been used in many organs and tissues such as thyroid, breast pathologies, liver and renal diseases etc. [4-7]. In the renal UE studies in the literature, parenchyma measurements were performed in the calculation of elastography values. However, no differentiation is made because cortex and medulla are found together in the renal parenchyma during the measurements. However, if the medulla and cortex have different values, study results differ depending on the site of measurement, compromising their reliability. In this study, it is intended to determine whether there is a difference strain ratio (SR) between medulla and cortex values in healthy individuals without renal disease.

The study was initiated with the consent of the Ethics Committee. All participants were made to sign a consent form. In this prospective study, the procedure was performed on patients with no known renal disease who were admitted to radiology for a routine check. The sex and age of the patients were determined.

Toshiba (Toshiba Medical System Corporation, Otawara, Japan) Aplio500 ultrasound device and 3-5 MHz probe were used in the study. Ultrasonographic strain elastography (SE) was performed on the patients following the gray scale US procedure. Before the SE procedure, the patients were evaluated with gray scale US. The SE process is semi-static and semi-quantitative. In this operator-dependent technique, two pressures per second are applied to the targeted area and then released. During elastography, the screen is divided into two parts with sinusoidal waveform on the right side and color chart on the tissue and the B-mode image on the left side. The sinusoidal wave allows us to rhythmically follow the compressiondecompression phases. In the decompression phase following compression and decompression, the strain ratio is calculated on the basis of the Region of Interest (ROI) from the target organ and the adjacent fat-connective tissue [5]. In the current study, the Strain Ratio (SR) values were calculated using ROI by collecting reference perirenal fat tissue in the decompression phase from the medulla and cortex, the upper, middle and lower regions of the kidney (Figure 1). 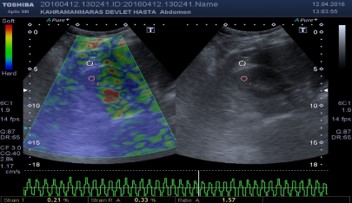 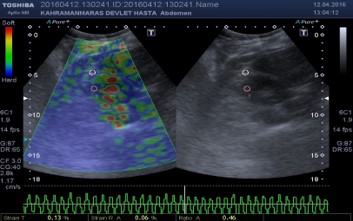 Figure 1: The Strain Ratio (SR) values were calculated using ROI by collecting reference perirenal fat tissue at the same depth in the decompression phase from the medulla and cortex, the upper, middle and lower regions of the kidney.

UE is a relatively new technique used to measure tissue stiffness. This method, which provides information of organ elasticity and can be applied in various ways, can be performed during ultrasonography with a software added to the ultrasonography procedure. UE is also performed for examinations of the kidney parenchyma. Currently, UE is preferred not only for determining kidney elasticity, but also to determine the fibrosis degree of the tissue, as well as for focal lesions, metabolic disorders and renal damage during the infection process [8]. Various studies have been conducted on kidney UE. Some of these studies utilize the strain elastography method while others rely on the SEW method [5-8]. In these studies, samples are taken from the renal parenchyma. However, as is known, the renal parenchyma consists of the cortex and the medulla; however, the samples are taken and the results are recorded without regard to this distinction, which raises the question of whether the results would have been different if the sample had been taken from the medulla or the cortex. In this current study, we examined the SR values of the medulla and the cortex for strain elastography, and the difference between the SR values of cortex and medulla is not found to be statistically significant. It was also established that the gender factor created no differences. As is known, strain elastography and share wave elastography have different principles. Since SWE is also affected by anisotropy, a separate study is needed on SWE [8,9]. In summary, there is no significant difference between the medulla and cortex values of healthy individuals who have undergone strain elastography, suggesting that the results of these studies are even more valuable.