Welcome to Clinical Journal of Orthopedics

A simple, no-cost, versatile, new gadget for lateral weight bearing skiagrams, its importance in Diagnosis & Treatment of Clubfoot Deformities (From Trash to Trove)

Copyright: This is an open-access article distributed under the terms of the Creative Commons Attribution License, which permits unrestricted use, distribution, and reproduction in any medium, provided the original author and source are credited. Copyright © 2021; Mittal RL

Lateral x-rays in the weight bearing position assume special significance in correction of foot deformities of congenital or acquired nature. There are limited references in the literatures for taking lateral weight bearing Xrays and these too by using diverse equipment, because its importance has not been fully realized. Amanda Er, et al [1] (Figure: 1) used wooden blocks for placing the cassette. Evans Danial [2] (Figure: 2) used special sloted table for this. Thapa et al also used special gadget for such exposure and similarly others, using their own ways [3-5].

Lateral weight bearing x-rays is a very useful tool for a comprehensive diagnosis of foot deformities, especially clubfoot. This view will show up the fixed/ rigid component of deformity, because the mobile part of deformity will get corrected by weight, thereby helping in their treatment also, as we will only have to correct the fixed deformity. There is a paucity of literature on the subject, as its importance was never realized. Therefore, it is highly justified to investigate this. Weight bearing will modify the deformity pattern and essential for correction of extreme deformities, neglected in the past.

In view of its importance, an innovative, versatile, no cost, handy gadget has been designed, tried & tested, to prove its utility. Unless we know, what is to be corrected, correction will be difficult. In case of FIXED deformities in limbs, compensatory movements at the neighboring joints are natural and essential features of human body to perform requisite functions. To elaborate further, kyphosis of dorsal spine gets compensated by lumber lordosis and stiff shoulder gets compensated by movements of scapula and clavicle. Hip flexion gets compensated by lumbar lordosis, equinus at ankle gets compensated by hyperextension at knee and vice versa. All these are clinically visible, when the patient is seen in lateral torso. There is a patient below with occult equinus and compensatory genu recurvatum and lateral weight bearing x-rays with knees forward show the equinus deformities (Figure: 3a,3b). 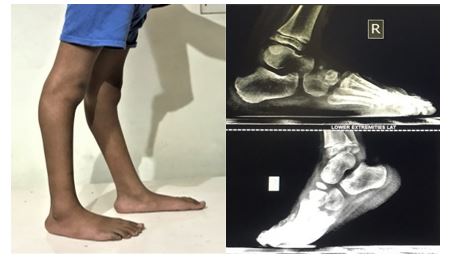 This is a self-designed, light-weight, portable, cheaper than the cheapest, rectangular wooden structure, made from trash wooden strips of adequate dimensions for placing foot, lying in any household. It is an assemblage, with rectangular foot rests on either side, a central post, high enough with an adequate slot on each side for placing x-ray cassette vertically, against the foot. The assembly is stable, while standing on it, with one foot first and the other afterwards. Patient stands on the foot rests of the frame with x-ray cassette vertical in the slot & x-ray tube facing the foot and cassette. Gadget has been shown in 2 views to showcase it in length-wise and breadth-wise for understanding its functioning. The actual use has been has been demonstrated by pictures of patient and the X-ray tube in position for taking the lateral weight-bearing x-ray. I have tried to illustrate the gadget's description and its actual use with the help of pictures in variety of patients [Figure 4,5]. 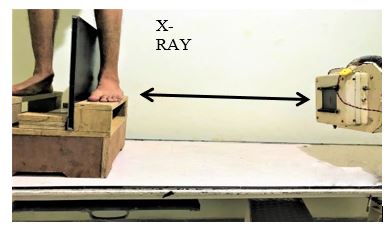 If equinus deformity is visible, patient stand with weight on forefoot, while exposing the film. However, in occult equinus with compensatory genu recurvatum (Figure 6a), patient dorsiflexes the ankle with knee flexed and applies full pressure on forefoot, before exposing the film. This way, occult equinus gets fully expressed in lateral weight bearing x-ray. This is important, because correction of equinus will lead to correction of hyper-extension of knee also, by itself. Patient thinks that the knee is deformed, but it is actually occult equinus & lengthening of heel cord corrects the knee deformity by itself (Figure 6b). 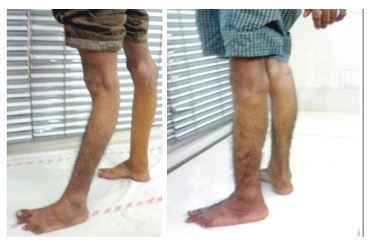 Clinical use with results

The gadget has been successfully used since many years, as is being amply demonstrated in some case studies:

Demonstrating Equinus: equinus deformity at ankle is only a part, but actually it has 5 hierarchic grades EQ-1 to EQ-5, as discovered by the author and published [6] in author’s clubfoot book [7]. Equinus may occur from mild (up to 30°, moderate (up to 60º) and steep (up to 90º). Diagnosis is highly important for its complete correction. It is a well-documented fact that each clubfoot is different with unlimited variables, proved and pubished by the author [9]. Lateral weight bearing skiagrams will show not only equinus in its complete form, but also all variables & so has its own importance. Some case studies will show this.

Case 1: The best example showing EQ1 and EQ2, at 90º, is world’s first, the most rigid case in all 3 planes with a crazy new name of OCTOPUS CLUBFOOT, given by the author. In fact, resemblance with an OCTOPUS flashed only after seeing patient’s lateral weight bearing x-ray picture and this name was suggested, as appreciated in figures [Figure: 7a-e]. Lateral weight bearing x-rays showed up all the deformities, which no other x-ray picture will show. Unprecedented, excellent correction, was achieved, by first ever, 4-in-1 incision & mega skin expansion, with many more firsts [8], documented in landmark publications also [6,7]. 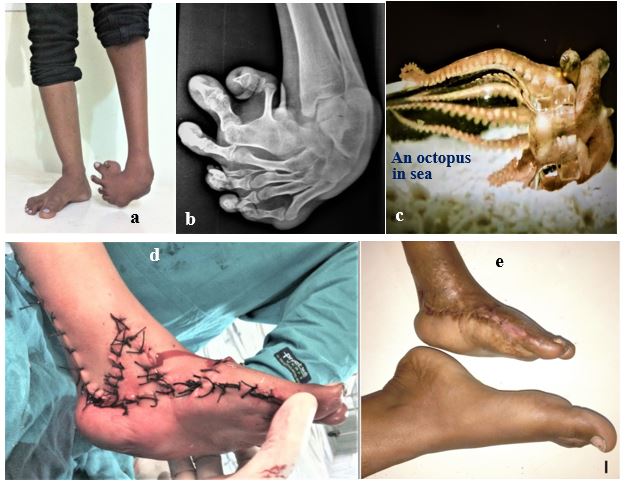 Case 2: Again with EQ1 & EQ2 i.e. with 90º steep plantar flexed talus and calcaneum can be seen, at their best, in lateral weight bearing x-ray (Figure 8a-8c). A good diagnosis always helped tremendously in achieving the best possible correction without any fusion by the surgical techniques invented by the author.

Case 3: In this, both EQ1 and EQ2 of mild degree & moderate on other side. There is slight rocker bottom deformity also at mid-foot to facilitate walking by increasing weight bearing area (Figure 9a, 9b). 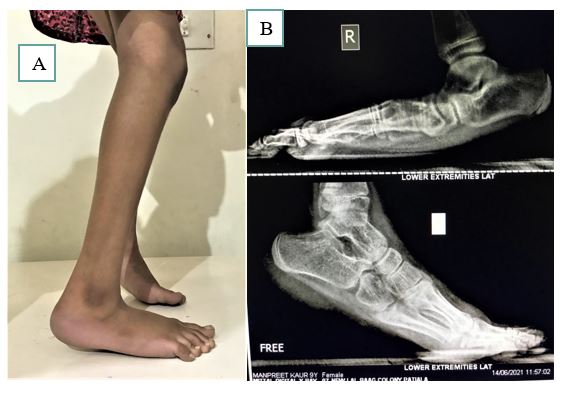 Case 4: In this, EQ1, EQ2 and EQ3 were at their extremes. Pathoanatomy of this case has been the result of relapse due to extensive scarring at mid-foot and under-correction. The weight shifted further distally and patient started walking on metatarsal heads with hyperextension at M.P joints, with typical, cock-up big toe), as seen in this old relapsed case, after earlier 2 surgeries. This patho-anatomy is also best appreciated in lateral weight bearing x-rays. The excellent correction without fusion was possible by extensive mega expansion in this case too (Figure 10a-10c).

Figure 10a-10c: Old clubfoot with vertical metatarsals and excellent correction, without any arthrodesis. These are some of the examples shown.

Author has been a passionate researcher in extreme clubfoot deformities, which are highly prevalent, as 95% residual and relapsed cases, reported in literature [6]. Besides this, there are large number untreated cases of these deformities, mostly in LMICs. Another important discovery by the author has been that”Each clubfoot is different- Mother of all clubfoot inventions”, with a large percentage of extreme deformities prevalent even at birth [9]. There are unlimited variables, foot being a multi-plane/ poly-arthrodial structure and author has invented improved surgical techniques with highly satisfying results [6-9]. Lateral weight bearing skiagram had always been having a casual appearance, however, author has foung it to be the single most important tool, which gives an inclusive diagnosis, in all extreme deformities, showing foot bones at their best. The present, innovative, gadget has been designed to facilitate taking this x-ray, which has been tried and tested since many years, without adding to any cost.

WORLD’S MOST PUBLICIZED SPECTACULAR OCTOPUS CLUBFOOT, a NATURE’S FREAK, with Innumerable firsts [8] was interviewed by London U.K dailymail, available at link http://www.dailymail.co.uk health/octopus clubfoot. The 4-in-1 surgery in this case, has become a BRAND SURGICAL CONCEPT for treating each and every extreme clubfoot deformities of any grade (rigidity & severity), at any age. In other words, if this most crooked deformity, in all 3 plans,, can be corrected by a surgical technique, then each and every case, severest of severe, will be corrected by this technique. It is noteworthy that it was only after seeing the bony framework in lateral weight bearing skiagram of this case that the name of OCTOPUS CLUBFOOT flashed in the mind, being a look-alike. Correction of this case by, 4-in-1, mega surgical technique, led to a mind blowing rediscovery, making it a Branded Surgical Concept for, each and every, extreme clubfoot deformity of any grade [8].

Low-cost technology in research has its own importance for LMICs and author has been a strong advocate of low cost technology, having developed numerous, and well documented low cost tools. Lateral weight bearing gadget is reproducible, being simple in design and any one can make it in his or her institution. No research is small. Falling of an apple from the tree was not a big issue, but proved to be a landmark. The present innovative gadget for lateral weight bearing x-rays has proved to be a very handy, low weight, cheaper than the cheapest, tried and tested since many years, in better correction of deformities and better patient satisfaction. This new simple, handy, light weight and no cost gadget will facilitate the procedure. Earlier apparatuses used are heavy, and costly. Author's gadget is simple and anybody can make with very little cost.