Welcome to Global Journal of Civil and Environmental Engineering

Phytoremediation of Soil Contaminated with Petroleum Hydrocarbons: A Review of Recent Literature

Copyright: This is an open-access article distributed under the terms of the Creative Commons Attribution License, which permits unrestricted use, distribution, and reproduction in any medium, provided the original author and source are credited. Copyright © 2019; Kuok Ho Daniel Tang

Increasing urbanization, industrialization, agriculture and transportation have resulted in widespread soil contamination, which has been made worse by a lack of regulation and law enforcement. While burgeoning anthropogenic activities cause accidental leakage and spillage of contaminants into the environment, inadequate regulation and enforcement provide loopholes for intentional disposal and discharges of contaminants which often lead to large scale pollution [1,2].

Soil contamination is generally defined as the occurrence of a substance above the normal concentration in soil, thus causing deleterious effects on non-target organisms. The contaminants are organic and inorganic in nature, each consisting of a myriad of substances. The most common organic contaminants are petroleum hydrocarbons consisting largely of the aliphatic and aromatic compounds [3,4]. Petroleum-derived non-hydrocarbons such as sulphur compounds, metallo-porphyrins and asphaltenes also constitute the organic contaminants. These contaminants are released into the environment primarily via the combustion and use of fossil fuels as well as the use of solvents, pesticides and pharmaceutical [2].

Trace elements are the main inorganic soil contaminants. Trace elements are cationic metals and oxyanions originating from rock formation and weathering, usually present as natural components of soil at concentration less than 1g kg-1 [4]. Trace elements such as zinc, copper, iron and manganese are crucial to support living processes but could raise health concerns at elevated concentrations. Other instances of trace elements like lead, mercury, arsenic and cadmium are toxic to organisms even at low concentrations [5]. Though natural processes such as volcanic activities and rock weathering contribute to high background levels of trace elements in soil, anthropogenic activities including mining, smelting, construction and agriculture aggravate inorganic soil pollution, particularly due to unnaturally high levels of lead, chromium, arsenic, zinc, cadmium, cupper and mercury in soil [4].

Soil contamination is a serious threat to soil functions especially in the Europe, Eurasia and North Africa. In the 1990s, the area of contaminated soil was estimated at 22 million hectares [6] but later regional data showed that the figure was most likely underestimated. Based on a report in 2015, the Chinese Environmental Protection Ministry estimated 16% of soil in China and 19% of its agricultural soil fell in the ‘polluted’ category [7]. In the European Economic Area and its allied West Balkan countries collectively known as EEA-39, there were about 3 million sites likely to have been polluted [8] whereas in the US, the number of polluted sites classified as Superfund National Priorities was approximated at above 1300 [9]. An approximated total of 80000 contaminated sites scattered over Australia in 2010 [10]. The extent of global soil contamination underscores the severity and extensiveness of the problem which demands attention and action.

Soil contamination is linked to environmental and health concerns which have socio-economic implications. Aromatic hydrocarbons, particularly the polycyclic aromatic hydrocarbons (PAHs) are hydrophobic and are persistent in the aquatic and terrestrial environment where they frequently form a film on water surface or adsorb to sediment particles [11]. PAHs are known to demonstrate mutagenic and carcinogenic properties [11]. Trace metals such as ionic arsenic, cadmium, mercury and lead are highly toxic and methylated mercury exhibits higher toxicity than ionic mercury [5]. Toxicity associated with these contaminants can render the affected lands unsuitable for agriculture and habitation. This affects food production which impacts food security, and concurrently impedes residential and commercial development [4]. Bioaccumulation and biomagnification of the contaminants in the food chains, as well as direct exposure to the contaminants, can cause health problems such as poisoning and illnesses [2].

Three groups of methods are commonly used for remediation of soil contaminated by petroleum hydrocarbons, i.e. physical methods, chemical methods and biological methods [11]. Physical methods include physical sorting, soil washing and electrokinetic remediation but soil washing using solvents and surfactants are more suitable for removal of petroleum residues [13]. Electrokinetic remediation was initially intended for removal of trace elements from soil using low intensity direct current discharged into soil via an array of electrodes [14]. The electric current induces electric gradient which propels movement of contaminants via mechanisms such as electro-osmosis and diffusion [15]. Electrochemical remediation was later modified to enable removal of organic contaminants particularly the water-soluble fractions and was used with other methods such as soil flushing to treat soil contaminated with both PAHs and trace elements [15].

Chemical methods are characterized by redox reactions, photochemical degradation and thermal desorption. These methods are often better-suited for remediation of petroleum hydrocarbons compared to the physical methods [11]. The redox remediation uses oxidizing agents like hydrogen peroxide and permanganate to break down aromatic hydrocarbons while photochemical degradation is a natural process where PAHs absorb ultraviolet rays of the sun and undergo photodimerization and photooxidation in the degradation pathways [16]. Thermal desorption is more accurately a physico-chemical method using heat to degrade and volatilize contaminants from the soil without combustion. This method is appropriate for removal of gaseous trace elements and volatile organic compounds [12]. 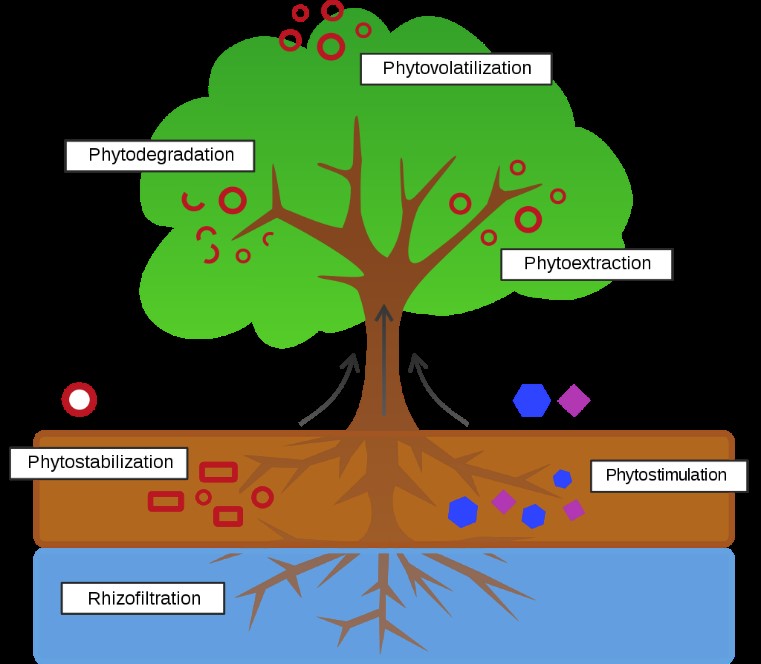 Phytovolatilization is fundamentally the release of metabolites from the leaves and stems of plants into the air after the contaminants are absorbed by the roots (Figure 1). The contaminants might have been metabolized into less hazardous compounds or, in the case of the recalcitrant ones, might not have been rendered harmless. Therefore, phytovolatilization only transfers contaminants from the soil to the air [14]. Phytodegradation uses plant enzymes such as dehalogenase and nitrilase to break down organic compounds (Figure 1). Symbiotic microorganisms also play crucial role in phytodegradation [2]. Rhizofiltration facilitates adsorption or precipitation of contaminants at the root zone and is the main mechanism for remediation of contaminated water bodies (Figure 1) [19]. Phytostimulation or rhizodegradation on the other hand, utilizes microorganisms attached to the rhizosphere of plants to break down organic contaminants and they benefit from the symbiotic relationship by having access to nutrients in root exudates secreted by plants (Figure 1) [2]. Phytostabilization and phytoextraction are more relevant to remediation of trace elements, via immobilizing the elements in the root zone in the former, as well as extracting and hyperaccumulating the elements in the latter [4].

Many plant species have been identified to possess the ability in remediating soil contaminated with petroleum hydrocarbons and phytoremediation has been subject to extensive studies over the years. Due to the number of studies conducted in this area, this review focuses on the studies conducted in the past 5 years starting from the most recent ones as shown in Table 1 below and does not attempt to cover all studies published in the period.

The duration of phytoremediation studies in Table 1 ranges from 14 days to 5 months and the hydrocarbon removal rates do not correspond with the duration of study. In fact, the methods and plants used have greater influence on hydrocarbon removal. For instance, in 14 days, Baoune et al. reported removal of up to 70% of petroleum crude hydrocarbons and 61% of phenanthrene from soil [21]. Kösesakal et al., however, reported up to 94% total aliphatic removal from liquid medium contaminated with 0.05-0.2% crude oil and the removal rates decreased with increasing levels of contamination [27]. In the case of soil contamination, higher removal rates are often achieved when phytoremediation is used with bioaugmentation particularly with selected petroleum degrading fungi and bacteria, as well as electrokinetic remediation.