Welcome to Global Journal of Civil and Environmental Engineering

Copyright: This is an open-access article distributed under the terms of the Creative Commons Attribution License, which permits unrestricted use, distribution, and reproduction in any medium, provided the original author and source are credited. Copyright © 2020; Ewa Karwowska, Pawel Choromanski, Maria Lebkowska

The proper functioning of processes related to the use of alternative energy sources is one of the key aspects in the field of biotechnology. Therefore, there is a need to develop new techniques allowing the adequate monitoring of the biogas production, especially in the presence of potentially inhibiting substances. The negative impact of chlorophenols on methane fermentation proces was confirmed in numerous studies. The inhibition effect is usually monitored based on chemical and microbiological assessment. However, the results of the tests sometimes do not reflect adequately the actual process. In this research the acetate kinase activity test was proposed as a sensitive control parameter for the monitoring of biogas production in the presence of 2,4-dichlorophenol. Acetate kinase can be considered a key enzyme in methanogenesis. The determination of its activity is simpler and less time consuming compared to other monitoring methods. The amount of the iron acetyl hydroxyamine complex measured in the proposed assay corresponds to the amount of acetyl phosphate formed during the methane fermentation. It was revealed that the acetate kinase activity can better reflect the changes in biogas yield and in methane concentration compared with chemical and microbiological analyses as well as the total dehydrogenase activity tests.

The methane fermentation process is one of the most economically effective techniques for the sewage sludge disposal. With a calorific value of 6000 kcal /m3, methane is a useful source of energy. Post-fermentation product can be used in agriculture, in road construction and for the reclamation of degraded areas. Anaerobic digestion processes are used mainly for highly loaded wastewater streams and sewage sludge characterized by a relatively constant composition. Contaminants present in sewage are generally biodegradable under anaerobic conditions but the presence of some substances may have an inhibitory effect on the biogas production efficiency. Phenols and chlorophenols are among the chemical compounds that may have the negative effect on the process. The comprehensive survey of liquid and gaseous phase in the anaerobic bioreactor is needed for the monitoring of the methane fermentation process. It allows an avoidance of the process upsets and detection of potential inhibition effects in biogas production caused by harmful substances. The physico-chemical assessment of the methane fermentation process usually includes the analyses of pH, volatile fatty acids (VFA), alkalinity, COD, BOD, the total content of the organic and inorganic matter, the biogas yield and composition (especially the methane content) [1]. The hydrogen concentration assessment was also proposed as a control parameter, due to its essential role in the methanogenesis [2]. The qualitative and quantitative analysis of microbial consortia involved in the methane fermentation [1,3] as well as some enzymatic tests, including the modified dehydrogenase test with TTC (adapted for anaerobic conditions) [4], and formate dehydrogenase test (FDA) [5], were also reccomended as tools for the biogas production monitoring. However, the obtained results were not evident in the presence of potential inhibitors of the methane fermenation process [6]. That’s why there is still a need to develop the appropriate techniques allowing the more precise monitoring of the methanogenesis. In this research the acetate kinase activity test was proposed as a new method for the assessment of the biogas production in the presence of potential inhibitor of sludge digestion - 2,4-dichlorophenol. Acetate kinase, as one of the crucial enzymes in methane production by archebacteria, seems interesting as a tool of potential process monitoring.

The digested sludge used in the experiment originated from the municipal wastewater treatment plant. It was characterized by pH 7-7,8, alkalinity - 3194-4136 mg CaCO3/dm3 and the volatile fatty acids content - 444-899 mg CH3COOH/ dm3. The experimental digestion was carried out for 32 days in 6 dm3 anaerobic bioreactor equipped with a gasometric cylinder, under nitrogen, in 32oC (the temperature characteristic for mesophilic methanogenesis). The duration of the experiment was determined on the basis of preliminary tests with and without addition of inhibiting compounds. The continuous mixing of bioreactor content was applied. Initial raw to digested sludge ratio was 1:1. Every 24h 1 dm3 amount of digested sludge was replaced with a portion of raw sludge, using a system of peristaltic pumps. For the first 9 days the process was carried out without the inhibitor. Then 2,4-dichlorophenol was dosed to the sludge in the increasing amounts: days 10-12 - 0,017 g/dm3•d, days 13-17 - 0,09 g/dm3•d, days 18-21- 0,17 g/dm3•d, days 22-26 - 0,33 g/dm3•d and days 27-32 – 0,67 g/dm3•d. Control analyses of the sludge were performed on 0, 10, 16, 23 and 32 day of the process. Chemical oxygen demand (COD) and dry organic and mineral matter were determined in accordance with PN-ISO 6060:2006 [7], and PN-EN 12879:2004 [8], respectively. The amount of the biogas and its composition was measured using GA 2000 PLUS analyzer. The microbiological assays covered the quantitative analysis of bacteria: mesophilic, anaerobic, acetate producing and sulphate-reducing, bacteria of I-III phases of the fermentation and methanogenic bacteria. The total number of mesophilic bacteria was determined in accordance with PN-EN ISO 6222:2004 [9]. The number of anaerobic bacteria was analyzed similarly, but the plates were incubated in ANAEROCULT anaerobic chambers. The acetate producing bacteria were determined on the medium with ethanol [6] after 48h of incubation in 32oC and the sulphate-reducing bacteria – on Starkey’s medium, after 7 days of incubation. Bacteria of I-III phases and methanogenic were cultivated on liquid media developed by Grabi?ska-Loniewska and S?omczy?ski [10]. For the bacterial cultures in solid microbiological media the results were presented as cfu (colony forming unit) in 1 g of the sludge dry weight, while for these carried out in liquid media it was calculated as the number of the cells/g of the sludge dry weight. The microbial dehydrogenases activity was assessed with TTC (triphenyltetrazolium chloride) test, according to modified method of PN-C-04616-8:2008 [11]. The modification concerned the experimental determination of incubation time and inclusion in the calculation processes which may occur without the presence of microorganisms. The acetate kinase activity assay was carried out based on the adapted method described by Iyer and Ferry [12], and Fowler et al. [13], based on the reactions:

The samples were sonicated prior to analysis, in order to release the enzymes from the cells. The determinations were carried out in a cell-free extract obtained through ultrasonic disintegration of sediment samples followed by centrifugation. 1 cm3 of the obtained sample was added to 2 cm3 of reaction mixture in 0.145 M TRIS-HCl buffer, pH 7.5, containing: hydroxylamine - 23.26 mg /cm3, potassium acetate 19.6 mg/cm3,, MgCl2 - 0.96 mg/cm3 and ATP - 5.07 mg/cm3. The whole was incubated at 32°C for 10 min. The reaction was stopped by adding 1 cm3 of trichloroacetic acid, and then 1 cm3 of a 2.5% solution of FeCl3 in 2N HCl was added. Samples were then incubated at 32°C for 15 min to obtain colorful complex product, which was then assessed spectrophotometrically at 540 nm. The enzyme activity was calculated as the amount of acetyl phosphate, based on the calibration curve for acetyl phosphate/ferric hydroxamate. In order to evaluate the suitability of the results of acetate kinase activity in the research on the sludge digestion in the presence of inhibiting compound the correlation between individual assay parameters was calculated using non-linear regression method.

The results of the experiment showed that the daily biogas production increased gradually during the first ten days of the process. An introduction of 2,4 dichlorophenol, even in the lowest concentration (0.017 g/dm3•d), caused the visible decrease in the biogas yield. After 32 days, with the highest content of 2,4 dichlorophenol (dosage of 0.67 g/dm3•d), no biogas production was observed (Figure 1).

The results of COD and dry matter analyses (Table 1) as well as microbiological assays (Figure 4) only partially corresponded to the data concerning the biogas yield and the methane content. In the case of mesophilic and acetate producing bacteria the low inhibition effect was observed for doses of 2,4-dichlorophenol exceeding 0,17 g/dm3•d, while for anaerobic bacteria, bacteria of I-III phases, methanogenic and sulphate reducing baceria the effect was visible even for the lowest doses (0,017 g/ dm3•d). Methanogenic bacteria appeared to be the most sensitive, although after the initial inhibition an unexpected increase in their number was observed. The ambiguous results were also observed in dehydrogenase activity of the digested sludge contaaminated with 2,4-dichlorophenol (Figure 5) Dehydrogenase activity was stimulated in the present of low doses of 2,4-dichlorophenol, while at the highest concentration it decreased reaching the value slightly lower than initially. 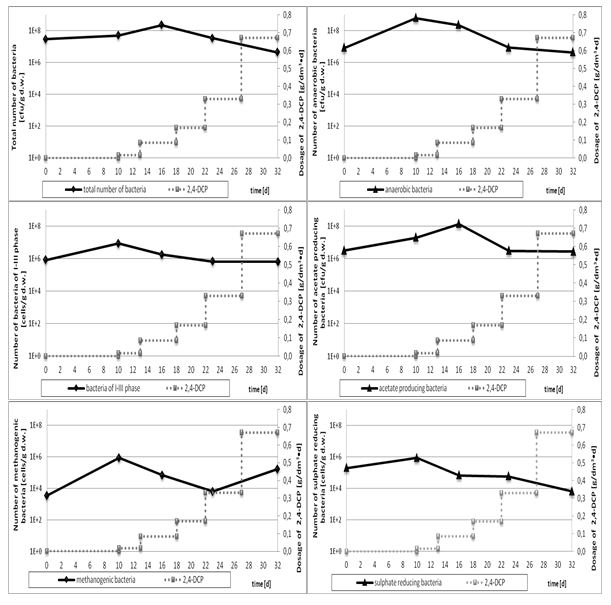 In contrast to the above results, the acetate kinase assay revealed the visible and strong sensitivity of the enzyme to 2,4-dichlorophenol introduced into the digested sludge. Its activity reflected the presence even of the lowest concentrations of the contaminanting substance, which corresponded to the inhibiting effect of the halogenated compound on biogas production. It was especially observed for the highest dosages of the contaminant, when both the acetate kinase activity and biogas production were totally inhibited (Figure 6).

Chlorophenols commonly occur in wastewater and sludge as a result of industrial activity (pesticides, wood preservatives and herbicides production, paper pulp bleaching) [14]. Among them, 2,4 dichlorophenol is one of chlorinated aromatics listed by US EPA as priority control contaminants [15]. Chlorophenols appear as recalcitrant compounds in the sludge digestion [16], and the inhibition of the fermentation processes in the presence of these substances was confirmed in numerous studies [17,18]. Acetate kinase is the phosphoryltransferase found both in aerobic and anaerobic microorganisms, capable of the phosphorylation of acetate. It is homologous to the propionate and butyrate/isobutyrate kinase [19]. Acetate kinase plays a dual role in methane fermentation process. During the acetate formation it catalyses the conversion of acetyl phosphate and ADP into acetate and ATP. In the another pathway, in the conversion of the acetate into methane and carbon dioxide, acetate kinase is responsible for the activation of acetate to acetyl phosphate [12,20,21]. The enzyme requires divalent cations, especially Mg2+ [22], and its activity is determined by the pH, temperature, retention time and the composition of microbial culture medium [1]. The acetate kinase activity test proposed in this research for the monitoring of the biogas production process was adapted from the procedures typically used in food industry. The choice of the method was also encouraged by the literature data concerning the possibility of application of acetate kinase genes as molecular markers for fermentative acetate producing/utilizing microorganisms in environmental samples [23]. The results of this study showed that acetate kinase activity can serve as a sensitive parameter for the monitoring of the methane fermentation process in the presence of chlorinated contaminants. It can reflect the changes in biogas yield and in methane concentration more adequately than the results of chemical and microbiological analyses as well as enzymatic test based on the total dehydrogenase activity. Therefore, the acetate kinase activity should be studied in future to develop the appropriate method for the biogas production monitoring in the presence of different process inhibitors.