Copyright: This is an open-access article distributed under the terms of the Creative Commons Attribution License, which permits unrestricted use, distribution, and reproduction in any medium, provided the original author and source are credited. Copyright © 2020; Tiziana Greggi

Case presentation: A 5-year-old girl comes to the emergency room with cervical pain and stiffness. This painful state, as mum reports, has been lasted for about ten days, after a mild trauma. The radiographic picture demonstrates a rotary subluxation C1-C2, type 1 according to Fielding and Hawkins classification. The treatment is head-halter traction with 2kg, and nonsteroidal anti-inflammatory drugs (NSAIDs). After 2 days the x-ray picture improves, but the painful symptoms persist. An in-depth diagnostic MRI of the cervical spine and brain revealed a medulloblastoma which made an immediate and effective neurosurgical intervention necessary.

Conclusions: the C1-C2 rotatory dislocation must always be evaluated with extreme care, without neglecting any clinical and anamnestic information for a correct and timely differential diagnosis. Remember that children show very clearly what they feel, always.

Under the pressure of the breaching time and busy shifts, many patients complaining of a sore or stiff neck and lateral flexion of the neck with contralateral rotation are discharged from the emergency department to the care of their general practitioners without adequate investigations. While most of the cases are due to benign causes, torticollis can be due to many congenital and acquired pathologies, some of which may need further investigation and urgent management. Rotational cervical dislocations due to congenital abnormalities are not very frequently reported [1,2,6]. As in the case of our little girl, congenital anomalies can be excluded c by simple x-rays. Anamnesis is important to consider or not a post-traumatic injury. Nevertheless, in some occasion’s anamnesis do not provide us with the certainty of an effective trauma, especially in children. Initial evaluation in AARS should be focused on eliminating inflammatory conditions or trauma as underlying causes. It is very important, for the purpose of treatment, to understand if it is an acute or chronic case. For acute cases, non-surgical management can be employed to treat the torticollis, beginning with the use of a cervical collar and analgesics [5]. Nontraumatic rotatory subluxation was first described by Charles Bell in 1830, in a patient with syphilis and pharyngitis who developed compression of the spinal cord and died. It was defined by Grisel as a syndrome in 1951 after the report of two cases of nontraumatic atlantoaxial rotatory subluxation with a recent history of pharyngitis. [1,2,6,16,17]. Grisel syndrome refers to atlantoaxial rotatory subluxation not triggered by trauma, affecting patients with a history of head and/or neck infections or occurring after otorhinolaryngology procedures [1]. It is a rare syndrome predominantly occurring in paediatric patients the diagnosis is established by the association of clinical and radiologic findings [15,17,19,21].

A 5-year-old girl is brought to the emergency room by her mother for neck pain. The child presented with torticollis and resisted any attempt to move the head because of pain. The head was tilted to one side and rotated to the opposite side with the neck slightly flexed (a typical ‘cock robin’ position of the head) with associated muscle spasm of the sternocleidomastoid muscle. She had no neurological problems, no difficulties in walking and running. The mother at the reception in the emergency room was very anxious and reported anamnestic information’s in a contradictory way. She told that the little girl had cervical pain and stiffness since about 10 days, and that she had had a trauma, playing with her brother, many weeks before. The mother described the girl as particularly emotional, who often had morning headaches, even in the past. After two days in hospital, she informed us that the girl often had headaches and dizziness when she fidgeted, and had never had a perfect balance during her walking. During the third day, after further careful interviews by the ward doctor, the mother said what she denied at the entrance: frequent inflammations of the upper airways and a punch in the neck received by the child from her brother.

After examining her with standard and AP open-mouth odontoid x-ray of the cervical spine, we admitted her with a diagnosis of C1C2 rotary dislocation. She was hospitalised for insights and chin traction for AARS. Not neurological Problems Were seen, except sometimes difficult in walking in a straight line.we decied to also MRI of the brain and spine.

X ray of the cervical spine in anteroom posterior and lateral view plus the transoral projection, showed a contracted cervical spine, with the neck deviated to the left and the head turned to the right (cock robin position) with a minimum dislocation “ad latus” of the dens with respect to the lateral masses of C1, at the time of the first observation in the emergency room [Figure 1a,b]. Cervical CT scan performed after 2 days of traction showed a very small rotation of the C1C2 articular facets, without any anterior translation of C1 with respect to the tooth of the epistrophe [Figure 2a-2C]. Cervical and brain MRI did not show any cervical lesion, but showed a massive lesion of the cerebellar left hemisphere with peri-lesional tissue edema. Through the MRI we could also see mass effect on the IV ventricle and consequent Chiari I. These were clear signs compatible with cerebellar-hemispheric medulloblastoma associated with supratentorial hydrocephalus [Figure 3a-3c]. 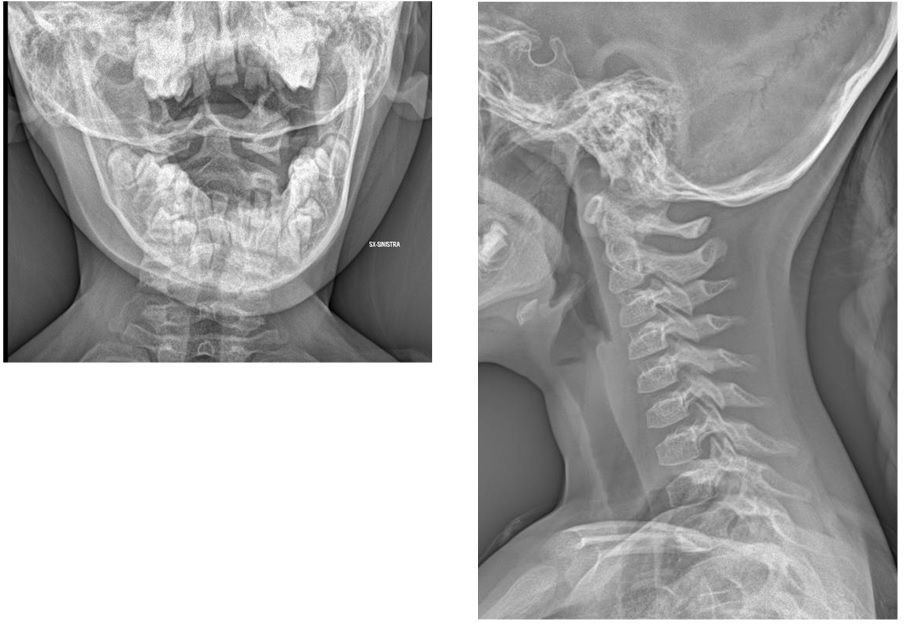 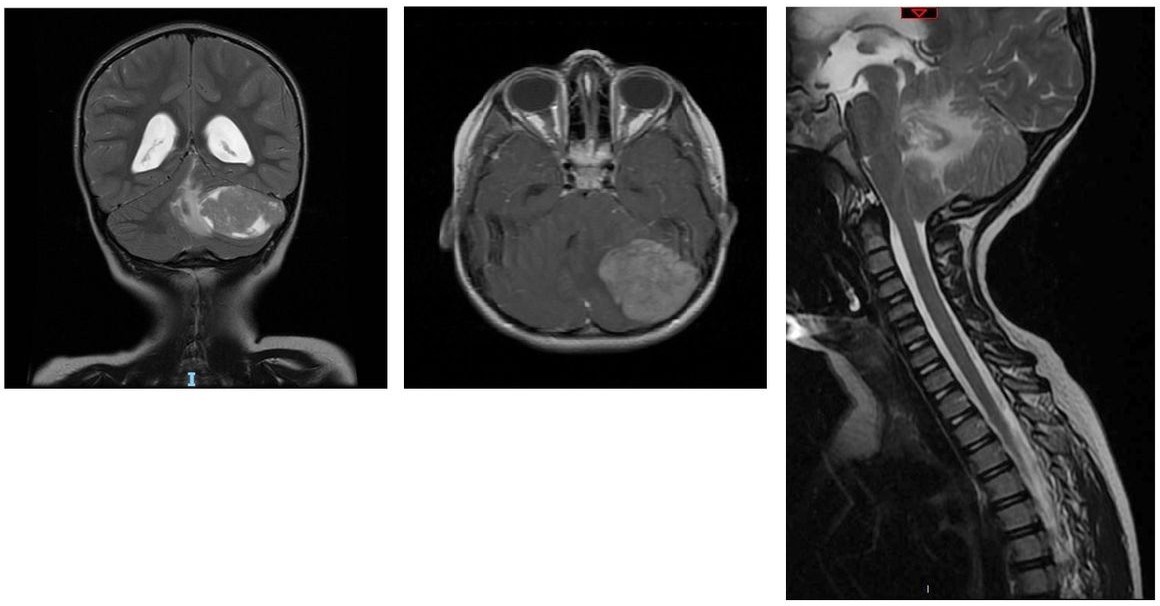 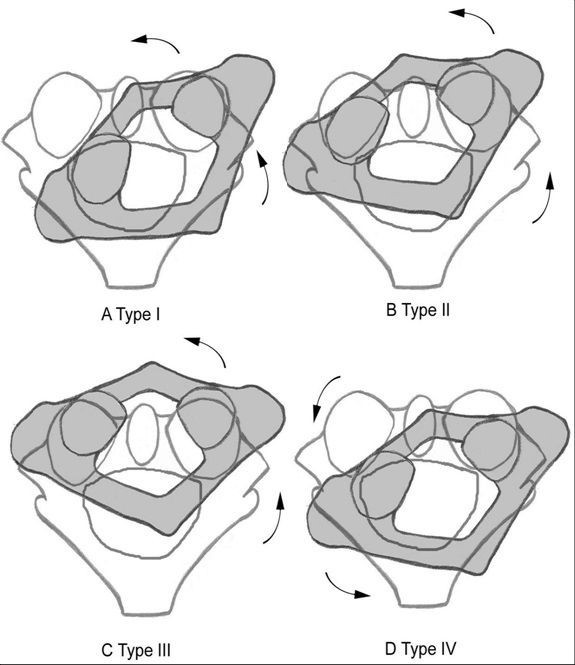 After MRI the diagnosis of a cerebellar neoplasia was made, so we transferred the child to the paediatric neurosurgery department. Craniotomy was performed, and extemporaneous histological examination had a report of: medulloblastoma. The excision of the mass was performed with an ultrasonic aspirator, then plastic of the dura, repositioning and bone synthesis was performed. Post-operative recovery was excellent, without any neurological damage and with complete regression of symptoms. The definitive histological e examination was: nodular desmoplastic medulloblastoma (gr 4, WHO classification) [4]. She was therefore taken in charge by paediatric onco-haematology for adjuvant treatments.

In our case, clinical and laboratory tests were not indicative for Grisel syndrome: no significant blood tests, no inflammation, minimal increase in alkaline phosphatase and anti-streptolysin title. Radiographic examinations revealed a first-degree rotary dislocation. In an attempt to reach a diagnosis, we also considered that AARS may be also present in Sandifer syndrome which is characterized by spasmodic posturing of the neck, back, or upper extremities associated with gastroesophageal reflux, esophagitis or a hiatal hernia. We considered in differential diagnosis that AARS has been described in patients with autoimmune disorders, including juvenile idiopathic arthritis, ulcerative colitis, and HLA-B27-positive seronegative spondyloarthropathy [2,3,17]. In our case we had no evidence of these pathologies. Not to be overlooked in differential diagnosis as well is Bow hunter's syndrome (BHS). It is rare cause of vertebrobasilar insufficiency that arises from mechanical compression of the vertebral artery by head rotation, severe vertigo, dizziness, right upper extremity tingling sensations and aggravated syncope when she turned her head. Our little patient had some BHS symptoms such as dizziness, vertigo, but she did not have blurred vision when turning the neck [8,11,12]. Differential diagnosis with tumours should be considered, even if it is the least frequent cause of AARS. Brain tumours are the most common cancer in children < 15 years of age and are the 2nd leading cause of cancer-related childhood death. Diagnosis is generally based on radiological tests (usually MRI) and biopsy [2,15,19,20,22]. Treatment may include surgical resection, chemotherapy and radiotherapy. Medulloblastoma is the most common malignant brain tumour in childhood. The peak incidence occurs in children aged between 2 and 7 years. The neoplasm is very rare in the adult population (over 21 years). This tumour is typical of the posterior cranial fossa, where it is located in both hemispheres of the cerebellum or in the cerebellar worm and being invasive and rapidly growing it usually spreads to other parts of the central nervous system (CNS) through the CSF: it can infiltrate the floor of the near fourth ventricle and extend into its cavity. It can also pass into the meninges. More rarely, it can give extra CNS metastases. Symptoms at the onset of neoplasia include loss of balance, lack of coordination, diplopia, dysarthria and, due to the involvement of the fourth ventricle (for which an obstructive hydrocephalus is common), signs of hydrocephalus, including headache, nausea, vomiting, unstable gait [10,22]. Treatment is based on a combination of surgery, radiation therapy and chemotherapy. Magnetic resonance imaging usually reveals a massive lesion with significant contrast enhancement involving the cerebellum. As mentioned above, medulloblastoma has a high propensity to locally infiltrate leptomeninges, as well as to propagate through the subarachnoid space to involve the ventricles, cerebral convexity, spinal leptomeningeal surfaces. Consequently, it is necessary to study with MRI the entire cranio-spinal axis. [7]. Surgery is entrusted with the task of removing as much of the lesion as possible, in fact post-surgical tumour residues confer a worse prognosis. Pure harbinger of unfavourable prognosis.is the presence of tumour cells in the cerebrospinal fluid or the detection of leptomeningeal metastases at MRI. Surgery alone is usually not curative. The addition of radiotherapy to the cranio-spinal axis, with focus on the primary tumour site, may result. Adding chemotherapy after radiation therapy increases the cure rate. With appropriate treatment, cases of long survival, over 3 years, for medulloblastoma patients, range from 60-80%. [10,22] Diagnosis of atlantoaxial rotatory subluxation is difficult and often delayed. For a correct diagnosis of an AARD, clinical and radiographic evaluation are essential. The possibility of having Dual Energy TC available today allows you to have well-detailed images of the occipital-cervical tract, with limited exposure to ionizing radiation [7,9,14]. MRI will however be irreplaceable for the differential diagnosis for non-traumatic situations [13,15,20,21] We reached the diagnosis that led us to the correct treatment after 4 days from the emergency access of the child. Perhaps the symptoms had been little understood even by the paediatrician for a long period. In our case, the symptomatology made it necessary to do the MRI and it was this examination that led to the diagnosis. In a case like this, delay or miss the diagnosis, could be catastrophic. MRI should be done promptly in every doubtful case [23].

The case report has been presented to the Rizzoli Institute Ethical Committee for approval: they answered there is no need for approval for a case report once the written consent of the patient and family has been recorded.

The written consent to the use and publication of patient data and clinical information for scientific reasons has been signed by the patient father.

Availability of data and materials

They are on the electronic chart and repository of the Rizzoli Ortopedic Institute and the PACS system of the hospital No Competing interests about the facts and materials reported in the paper No funding has been required for the publication.

Tiziana Greggi: Writing of the paper

Chiara Ghizzi: Paediatrician of the unit

We value the great work of our residents, Lucrezia e Giovanni.