Welcome to International Journal of Biology and Medicine

Copyright: This is an open-access article distributed under the terms of the Creative Commons Attribution License, which permits unrestricted use, distribution, and reproduction in any medium, provided the original author and source are credited. Copyright © 2021; Idriss H. Mohamed

Aim of study to investigate the effect of certain natural products from medicinal plants as adjuvant systems to reduce toxicity of chemotherapy. cyclophosphamide (CTX) is anti-cancer DNA alkylating chemotherapeutic agent to act against a variety of tumors in head and neck, testicular, ovarian, bladder, small-cell lung cancers, this study performed to investigate the effect of Berberis vulgaris in combination with CTX on hematological and physiological parameters induced by CTX in mice. In this study we evaluate the possible protective effects of Berberis vulgaris on hematological and physiological parameters in mice chronically treated with CTX. Four groups of mice were examined: a control (I), mice treated with CTX (II), mice treated with CTX + Berberis vulgaris (III), and mice treated with Berberis vulgaris (IV). All animals were treated for successively 5 days and killed one week after the last treatment, The results show significant decreases in levels of red blood cell distribution width (RDW), white blood cells (WBCs), neutrophils and lymphocytes counts with increases in levels of monocytes. Also, hepatocytes oxidative stress which characterized by significant increases in the serum activities aspartate aminotransferase (AST), alanine aminotransferase (ALT). Berberis vulgaris combined with CTX or Berberis vulgaris alone successfully normalized the hematological and biochemical parameters in form returning (RDW), (WBCs), monocytes and lymphocytes count to normal level. Hepatocytes oxidative stress, which characterized by a significant decrease in the serum activities of (AST) and (ALT).

Herbal medicines derived from plant extracts are being increasingly utilized to treat a wide variety of clinical disease [1]. Because of the concerns about the side effects of conventional medicine, the use of natural products as an alternative or supportive to conventional treatment in the healing and treatment of various diseases has been on the rise in the last few decades [2]. A larger number of these plants and their isolated constituents have shown beneficial therapeutic effects, including anti-oxidant, anti-inflammatory, anti-cancer and anti-microbial effects [3]. Berberis vulgaris can also act as an anticancer agent. Berberine inhibits cyclooxygenase- 2 transcriptional activity in human colon cancer cells [4] and [5].and preliminary studies have shown that berberine sulfate inhibits tumor promoting activity of teleocidin in two stage chemical carcinogenesis on mouse skin [6]. Berberine also inhibits DNA topoisomerase I and II in biochemical system [7] and [8]. The antioxidant activity of berberine has been widely demonstrated. It was reported that berberine can scavenge ROS and reactive nitrogen species (RNS) [9]. Asai and co-workers reported that berberine can reduce Aβ levels by altering APP processing in human neuroglioma H4 cells that stably express Swedish-type of APP at the range of berberine concentration (0.1-100μM) without cellular toxicity [10].

Although CTX is a drug widely applied in the treatment of malignant and nonmalignant tumors, the clinical outcomes of treatments with these agents are severely limited, mostly due to its toxicity to normal tissues. The predominant toxicity of CTX is bone marrow suppression. The resultant granulocytopenia greatly increases the risk of serious infection in patients undergoing cancer treatment [11]. Therefore, it is necessary to develop adjuvant therapy which may be used in combination with CTX to improve the efficacy of the treatment or reduce the associated undesirable side effects [12].

Experimental Animals: Adult female Swiss albino mice weighting 23±2 g were used in this study. Animals were housed (5animals per cage) at the animal house at Zoology Department, Faculty of Science (Omar AL-Mukhtar University, Albida) in clean and dry plastic cages, in 12h/12h dark/light cycle under laboratory condition of temperature and humidity. Mice were divided into four groups, a control mouse with saline PBS solution (group I), mice injected with a single dose of CTX at a dose of 200 mg/Kg “4 mg/mouse” (group II), mice treated with CTX at a dose of 200 mg/Kg and administered with valgaris at a dose of valgaris “200 µg/mouse orally” (group III), and normal mice administered with a single dose of valgaris alone “200 µg/mouse orally” (group IV).

Figure 1 and 2 showed that CTX treatment significantly decreased the total numbers of white blood cells coincided with decreases in the number of lymphocytes when compared to normal group. The co-treatment with valgaris returned the white blood cells to its normal coinciding with recovery of the relative numbers of lymphocytes as compared to control values (PBS group). 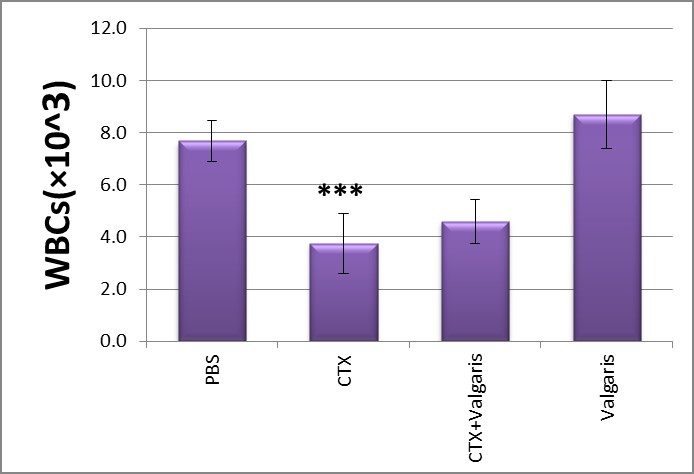 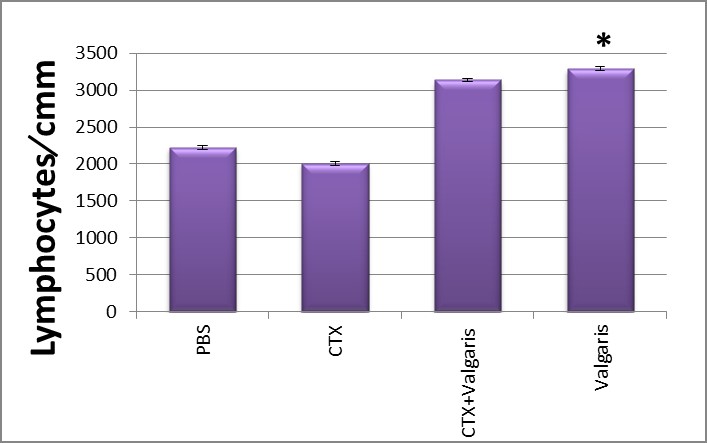 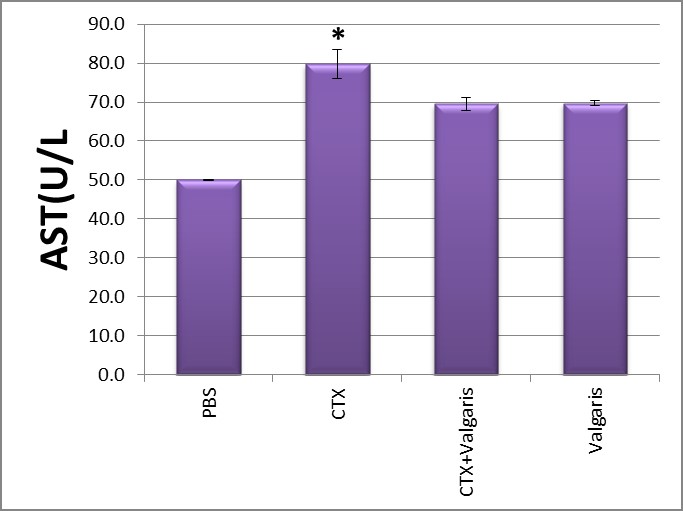 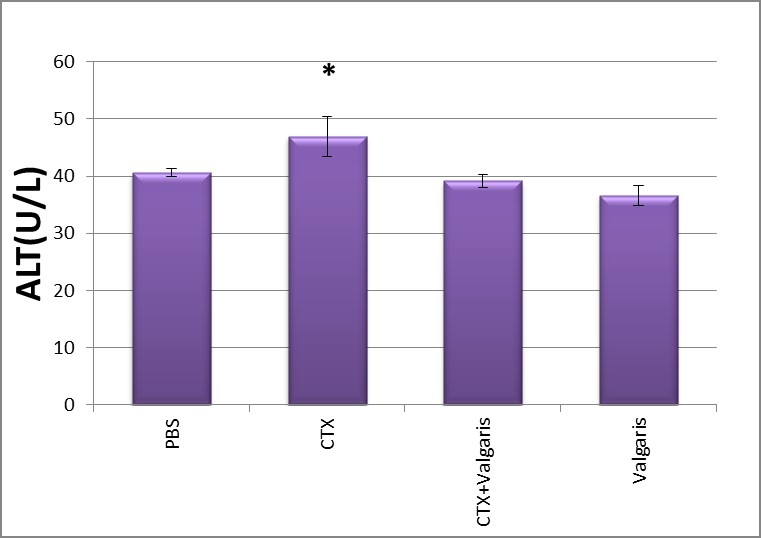 The study was conducted to evaluate the effect of the administration of Vulgaris on hematological, biochemical parameters alteration and to reduce the toxicity induced by a high dose of the anticancer drug CTX in mice. First of all, we found that mice who received treatment with CTX induced a marked decrease in the total number of leukocytes mainly in neutrophils count, however, this treatment was also associated with induced decreases in the number of lymphocytes and increases of monocytes. These data are consistent with data reported by [16] on the effect of CTX in mice. Also in our study, the results show increasing the numbers of leukocytes, lymphocytes, and neutrophils during valgaris injection alone or in combination with CTX treatment. Consistent with these results[17]. Interestingly, the total number of leukocytes increased after treatment with CTX and valgaris as well as the number of lymphocytes, and neutrophils with decreases the number of monocytes . These results are in line with the previous investigations which demonstrate that valgaris has a cytostimulatory effect on lymphocytes to enhance the immune responses and to stimulate the production of lymphocytes [18]. By evaluating the biochemical changes, we found the CTX treatment associates with a dysregulation in liver functions and oxidative stress. CTX is catabolized by ALDH which is an NADP-dependent enzyme, it is well known that hepatocytes and hematopoietic stem cells produce a high amount of ALDH make them relatively resistant to CTX while it is cytotoxic to mature hematopoietic progenitors and lymphocytes [19]. Furthermore, several studies indicated that CTX leads to oxidative stress as it is recognized that strong depletion of antioxidants enzyme activities associated with high production of Prooxidants molecules [20]. CTX induces liver function alterations by modulating all liver enzymes [21]. The liver is the richest source of both GOT and GPT enzymes, so Any damage to the liver cells will increase in both of these enzymes [22]. Increased tissue ALP is the main stigmata of chemical-induced tissue injury along with hepatocellular necrosis. The elevation of AST and ALP recorded in the present findings are consistent with [23]. ALP is now frequently detected to estimate the degree of liver dysfunction due to CTX of advanced liver cirrhosis as well as the expectation of heart failure development [24].