Welcome to International Journal of Biology and Medicine

Osama H Aldeeb1, Bassam A Ibridan2, Fayrouz A Khaled3 and A Shah3

Copyright: This is an open-access article distributed under the terms of the Creative Commons Attribution License, which permits unrestricted use, distribution, and reproduction in any medium, provided the original author and source are credited. Copyright © 2022; Osama H Aldeeb

Dimethoate and chloropyrfios are two of widely used organophosphorus insecticides in agriculture. The irrational use of Dimethoata and chlyropyrfios in Libya play a crucial role in the occurrence of many diseases affecting plants, animals and the environment. The present work was conducted to investigate the alterations in hematological factors in male rabbits after orally administration a single dose of dimethoate (DM) by gavage at a dose of 43.2 mg/kg B.W/day (1/50 of DM) lethal dose and chloropyrfios by gavage at a dose of 33.3 mg/kg B.W/day (1/50 of CPF) lethal dose for 12-week. 15 Male Rabbits weighting (1.891-27.6 Kg)., were divided into 3 groups with 5 animals in each, first group served as control animals, they received 5 ml of corn oil, while animals in second group received Dimethoate, animals in third group received of chloropyrfios. Results indicated that treatment with Dimethoate and chloropyrfios caused significant (P<0.05) decrease in white blood cells (WBCs), haemoglobin (Hb), red blood cells (RBCs), zpacked cell volume (PCV) and platelets. While, increase MCV, MCH, MCVH compared to control. The erythrocytes sedimentation rate highly significant increase in the blood of Dimethoate and chloropyrfios treated rabbits as compared to control.

Insecticides known as chemicals manufactured and used to control insects like lice, ticks and used in veterinary medicine to control and eradicate mites and mange [1,2]. Chlorpyrifos a broad-spectrum insecticide belongs to organophosphorus compounds. It is used in public health, agricultural crops and in livestock to control different pests [3,4], chlorpyrifos eliminates and eradicates insects by direct exposure or in contact with treated surfaces. Chlorpyrifos classified as a moderate toxic compound within organophosphorus compounds in mice and rats and LD50 ranged between 50-500 mg/kg body weight [5], as well as have moderate toxicity in sheep and Guinea pigs [3]. Toxic effects of chlorpyrifos by affecting normal function of the insect nervous system [6] by irreversible inhibition of acetyl cholinesterase enzyme (AchE) that is responsible for the breakdown of acetylcholine (Ach) [7]. Dimethoate (DM) is an insecticide referred to as organophosphates, which is cholinesterase inhibitor. Cholinesterase is an enzyme that is essential for the proper working of the nervous systems of both humans and insects. Administration of DM to pregnant rats produced enzymatic changes associated with mild pathomorphological changes in liver and brain, [8]. Previous studies indicate that DM intoxication causes cellular injury and oxidation stress which leads to lipid peroxidation and free radical production [9]. Some studies have shown that acute and sub chronic exposure etestes of rats [10] and human erythrocytes [11].

Mature male New Zealand White rabbits age of 6 months and initial weight of (1.891?27.6 Kg) were used. Animals were individually housed in cages and weighed weekly throughout 3-months experimental period. Fifteen mature male rabbits were randomly divided into three equal groups (each five rabbits) as follows group ? rabbits were used as control daily for 12 successive weeks. Group II rabbits were treated daily with Dimethoate (DM) by gavage at a dose of 43.2 mg/kg B.W/day (1/50 of DM) lethal dose [12]. Group III rabbits were treated daily with chloropyrfios by gavage at a dose of 33.3 mg/kg B.W/day (1/50 of CPF) lethal dose [13]. The doses of the dimethoate and chloropyrfios were calculated according to the animal’s body weight on the week before dosing. The tested doses of dimethoate and chloropyrfios were given daily for 12 weeks.

Effect of dimethoate and chloropyrfios on hematological parameters

Table1 and Figure 1to 8 presents the hematological parameters of male rabbits treated with dimethoate and chloropyrfios. Results indicated that treatment with dimethoate and chloropyrfios decrease in WBCs, Hb, RBCs, PCV and platelets compared to control. On the other hand, caused a significant increase in MCV, MCH and MCHC comperd to control group. The haematological indices including Hb, WBC, MCV, MCH and MCHC were not altered significantly. However, PCV was significantly (P≤0.05) decreased (Table 1). 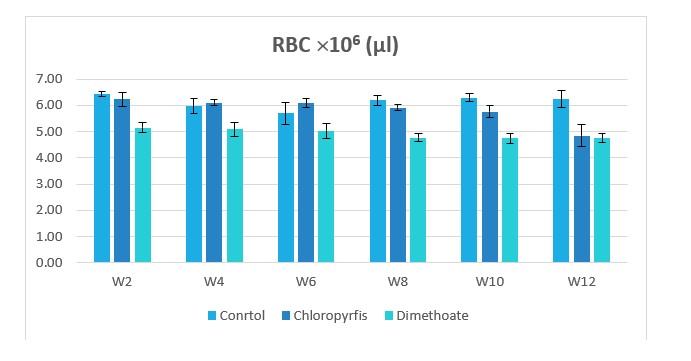 Figure 1: Change in RBC counts during treatment of male rabbits treated with dimethoate and chlyropyrfios.

Figure 2: Change in hemoglobin (Hb) during treatment of male rabbits treated with dimethoate and chlyropyrfios.

Figure 3: Change in PCV counts during treatment of male rabbits treated with dimethoate and chlyropyrfios.

Figure 4: Change in WBC counts during treatment of male rabbits treated with dimethoate and chlyropyrfios.

Figure 5: Change in PLAT counts during treatment of male rabbits treated with dimethoate and chlyropyrfios.

Figure 6: Change in MCV during treatment of male rabbits treated with dimethoate and chlyropyrfios. 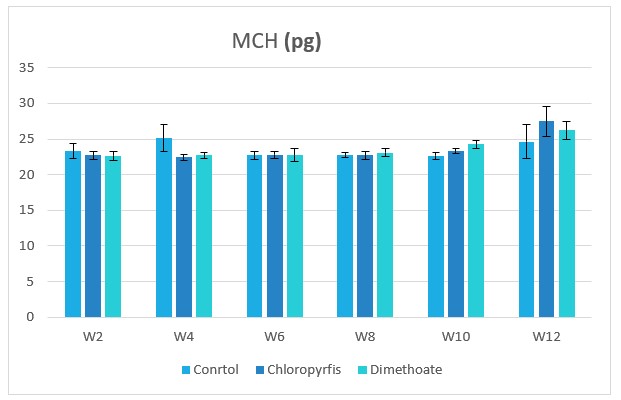 Figure 7: Change in MCH during treatment of male rabbits treated with dimethoate and chlyropyrfios. 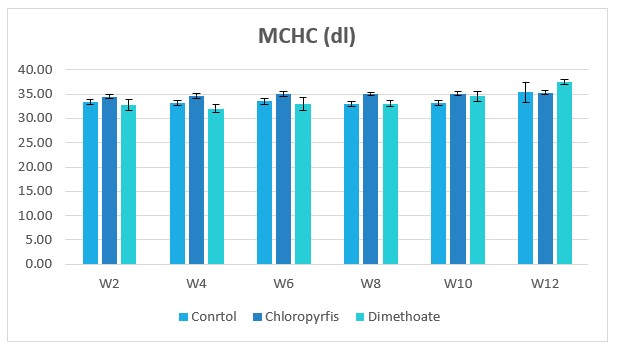 Figure 8: Change in MCHC during treatment of male rabbits treated with dimethoate and chlyropyrfios.

Table 1 and Figures 1 to 8 represent the hematological parameters of male rabbits treated with DM and chlyropyrofis. Pesticides exposure poses a serious risk to all domestic animals, to the environment and the public health [15]. The results of this study showed that, the hematological parameters RBC and Hb were significantly decreased in DM treated rabbits when the erythrocytes sedimentation rate was highly significant increased as compared to control. The effect of organophosphorus pesticides on the Hb of several workers has been studied by [16,17]. The decrease in the Hb along with the decrease in the RBC might be due to the effect of pesticides on blood forming organ (bone marrow and liver), and inhibition of many steps of heme biosynthesis in rabbits, as the result of pesticides exposure [17].

The poisoning by pesticide residues leads to the development of anemia due to interference of Hb biosynthesis and shortening of the life span of circulating erythrocytes [18,19]. The increase of E.S.R. indicates to inflammation caused by organophosphorus pesticides [20]. Our finding is in agreement with [19], that showed that pesticides decrease RBC and Hb levels, and [20], who noticed the reduce of R.B.C., Hb, and increase in erythrocytes sedimentation rate in rabbit’s exposure to orally dose of 10mg/kg. Of the organophosphorus pesticide Methidathion.

In this study significant decrease alterations were observed in Hb concentration in rabbits which were intoxicated. However, one study has observed decrease in Hb concentration due to a direct effect on bone marrow as reported in rabbits [21]. The discrepancy might be attributed to short period of study with intact compensatory mechanisms. Significantly decreased PCV might be due to malabsorption of nutrients or the hyperactivity of the animal [22]. The present observation was in accordance with previous workers [22], who observed no effect on the basophil values following DM administration in mice. However, decrease in TLC and lymphocyte values following DM administration has been reported in Oncorhynchus mykiss and mice [23].

The low hematological parameters of PCV, Hb, and RBC show that chronic CPF administration causes anemia. This agreed with earlier ?ndings [27,28]. [27] attributed the anemia to the ability of CPF to reduce serum iron concentration, thereby compromising the synthesis of Hb. The anemia may also be related to interference with Hb synthesis and shortening of RBC lifespan [17]. We have earlier shown that chronic CPF exposure causes increased erythrocyte fragility, partly due to increase dlipoperoxidation of the erythrocyte membranes [28]. The increased lipoperoxidation in the CPF group, re?ected by signi?cant MDA concentration, may have caused increased vulnerability of the RBC to destruction, but may directly destroy the erythrocytes thereby leading to anemia. MDA is a major oxidation product to per oxidized poly unsaturated fatty acids (PUFAs), and increased MDA content is an important indicator of lipid peroxidation [29]. The RBC is susceptible to lipoperoxidative changes because of its direct association with molecular oxygen, high content of metal ions catalyzing oxidative reactions, and availability of high amount of PUFAs, which are susceptible to lipid peroxidation. Inability to repair membrane damage and regenerate due to lack of nucleus and poor antioxidant enzymes composition of the plasma medium in which they are bathed [30] are some of the other factors responsible for the increased vulnerability of RBC to lip peroxidation. Therefore, CPF-induced oxidative damage to the erythrocyte membrane may have contributed to the anemia recorded in the CPF group. This is because the process of lipid peroxidation impairs the functions and homeostasis of the erythrocyte membranes through decrease in hydrophobic characteristics of bilayer membrane, and altering the a?nity and interaction of proteins and lipids [31]. ROS can equally a?ect the proteins resulting in modi?cation of enzymes activity, and damage to the membrane transport proteins may produce disturbed cellular ionic homeostasis, leading to alterations in intracellular calcium and potassium that triggers a series of changes in the cell [32].

26. Halliwell B. 1989. The chemistry of oxygen radicals and other derived species. Free radicals in biology and medicine. ‏