Welcome to International Journal of Dermatology and Skin Care

Copyright: This is an open-access article distributed under the terms of the Creative Commons Attribution License, which permits unrestricted use, distribution, and reproduction in any medium, provided the original author and source are credited. Copyright © 2019; Pietro O. Rinoldi

Childhood vasculitis is a challenging group of conditions that are often multisystem in nature and may require integrated care from multiple pediatric subspecialists, including cardiologists, dermatologists, gastroenterologists, nephrologists, neurologists, and rheumatologists. Apart from Henoch Schönlein syndrome, recently renamed immunoglobulin A vasculitis, and Kawasaki disease, which are reltively common, there are a number of important but comparatively rare vasculitides affecting children [1-4].

Acute hemorrhagic edema of young children [5-8] is a skin limited nongranulomatous leukocytoclastic small-vessel vasculitis, which usually develops in previously healthy subjects after a simple, mostly viral, febrile illness (more rarely after a vaccination). The condition was initially reported in 1913 by Irving Snow in the United States and in 1936 by Mario Del Carril in Argentina [5,6]. The most comprehensive descriptions, however, were made in Germany before the Second World War by Heinrich Finkelstein (1865–1942) and later by Hubert Seidlmayer (1910–1965). A significant description was also made in 1942 by Marcel Lelong (1892-1973) in France [5,6].

In our opinion, there are at some problems with acute hemorrhagic edema of young children.

In everyday clinical practice, the mainstay of the diagnosis is based on symptoms and signs alone (Table 1). The crucial diagnostic clue, is, in our opinion, the acute onset of frightening erythematous annular skin lesions sparing the trunk and a diffuse non-pitting body edema in a well appearing infant, which is often afebrile (Figure 1). Standardized names and definitions are obviously a prerequisite for developing validated classification and diagnostic criteria for cutaneous vasculitis. Regrettably, however, no criteria for the classification of acute hemorrhagic edema of childhood have been included in the recent update on the nomenclature for cutaneous vasculitis [9,10]. 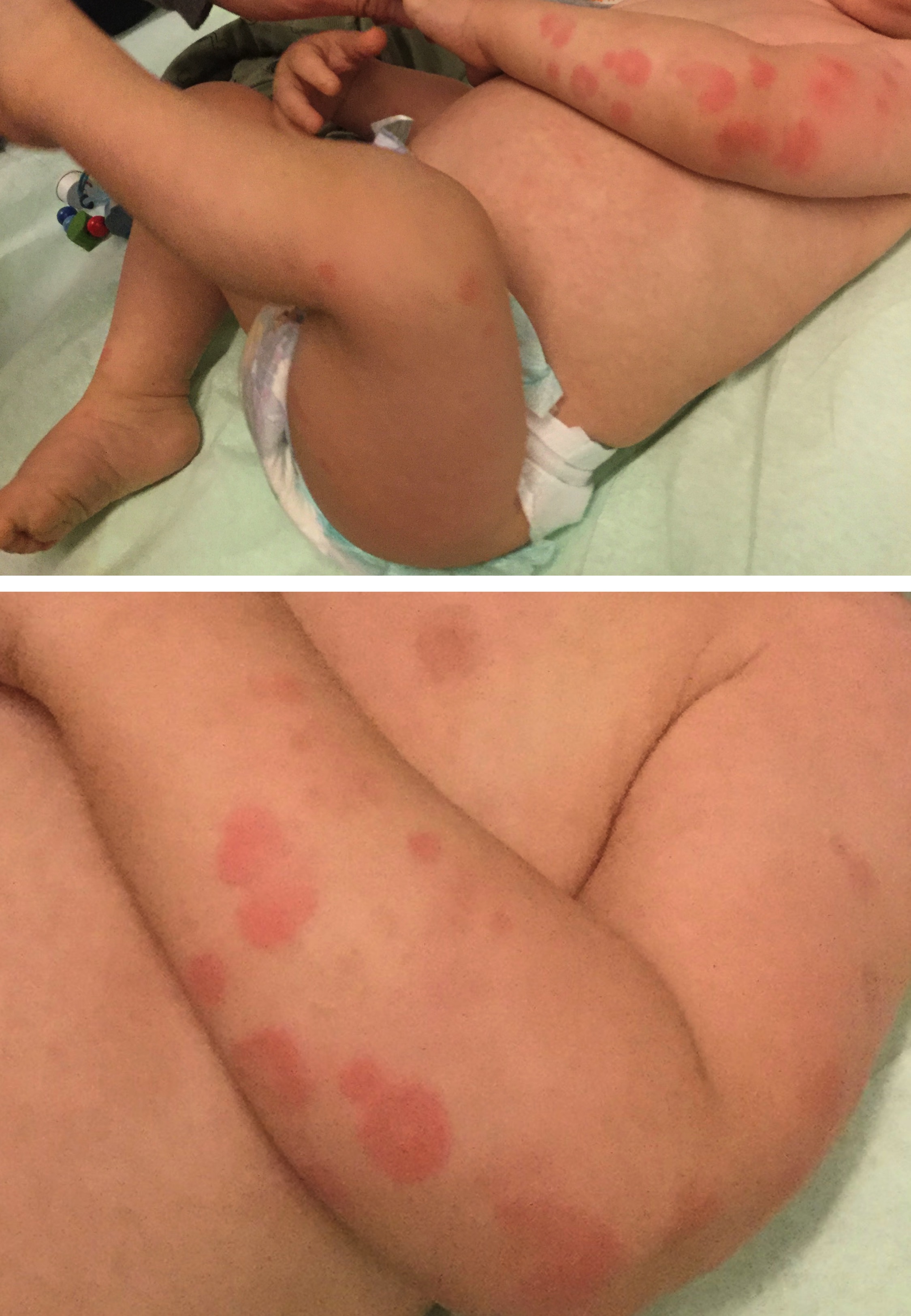 Seventeen-month-old female presented to the emergency department with a 2-day history of a progressive rash and swelling that started on her lower extremities and rapidly spread to the upper extremities, face and ears. Physical examination revealed an afebrile well-doing infant with multiples erythematous annular lesions sparing the trunk and a diffuse non-pitting painless body edema. No scratching was seen. Laboratory examination revealed normal total blood cell count without leukocytosis, C-reactive protein and urinalysis. The girl had recently been managed by her pediatrician for a common cold. Rash and edema normalized within 5 days. The test for detection of 26 respiratory viruses and Mycoplasma pneumoniae in a nasopharyngreal swab was negative. Consent to the use of the photographs was obtained.

Acute hemorrhagic edema is considered very uncommon. More importantly, little information is available on its prevalence. We found in the literature four case series publishdd between 2007 and 2016 including apparently unselected pediatric patients with either Henoch-Schönlein or acute hemorrhagic edema: 329 cases with the former and no more than 18 (approximately 5%) cases with the latter condition. These data apparently confirm the low prevalence of the condition. In our opinion, however, acute hemorrhagic edema is likely underrecognized (and underreported). This is mainly due to the fact that the diagnosis of infantile erythema multiforme*, that of unclassified infection-associated skin rash or perhaps also that of atypical Waterhouse-Friderichsen syndrome is usually made in affected patients.

A coming of age for acute hemorrhagic edema of young children

The evidence from systematic reviews, currently considered as especially reliable, is often used to inform on cause, risk factors, clinical features, prognosis and complications of a disease. Nonetheless, clinical practice based on valid evidence is especially challenging in the field of rather rare diseases such as acute hemorrhagic edema [11]. To overcome at least in part this difficulty, we recently developed the acute hemorrhagic edema bibliographic database AHEBID, which progressively integrates all the original articles on acute hemorrhagic edema published in Dutch, English, French, German, Italian, Portuguese, Spanish and Turkish after the original report by Snow in 1913. For this purpose, we used the Excerpta Medica and US National Library of Medicine databases, Google and especially the medical literature folder on acute hemorrhagic edema started by one of us in the early eighties. The literature will be systematically screened by two members of our group every second month. AHEBID project currently contains bibliographic records on more than 450 individually documented and published cases of acute hemorrhagic edema that have been published since 1970. It also integrates the articles published before 1970, including among others the seminal reports by Snow, by Del Carril, by Finkelstein, by Seidlmayer and by Lelong. The data, which are currently being extracted, are not yet lodged in a publicly accessible archive. It is our hope that they will be used to provide greater insight into the triggers and both the typical and atypical features of acute hemorrhagic edema of childhood. More importantly, we hope that that the results will help developing consensus guidelines relating to diagnosis and management of this skin-limited vasculitis.