Copyright: This is an open-access article distributed under the terms of the Creative Commons Attribution License, which permits unrestricted use, distribution, and reproduction in any medium, provided the original author and source are credited. Copyright © 2021; Abdulwahab Alahmari

Introduction: For the past years, there has been a lot of preserving techniques for human cadavers and histology specimens as well as human remains. But little did we know that some of these methods are unsafe, unpractical and/or expensive.

Aim: The aim of this paper is to propose a new or alternative method and technique that can help in preserving the said specimens. Moreover, the new technique will be more efficient, practical, safe and affordable. Given the resources are readily available when needed.

Methods: This method takes a piece of animal muscular tissue to preserve it as a preserved part and preserve a histology with the same technique to evaluate any form of tissue decomposition.

Results: As a result of this experiment, the piece of animal muscular tissue was preserved by this method for 1 year. The histology specimen was preserved successfully and it looks identical to the tissue that is preserved by formalin.

One of the most used methods in preserving human cadaver is formalin (formaldehyde). As this substance slows down the tissue decomposition of cadavers, which has been proven effectively over the years. It increases the risk of pharyngeal, gonadal, and corneal cancer for the anatomist who perform dissection [1]. Moreover, as the cadaver to be preserved is drowned in a formalin tank regularly which increases the odor level. The risk for every practitioner to inhaling the substance is crucial to their well-being. There are plastination and silicon preservation methods which cause tissue stiffness that leads on a rather difficult way on dissecting specimen, which also make it unpractical. On the other hand, an ancient method for mummification during the time of the pharaohs (ancient Egypt) was used. Its effect is comparable to formalin but, it causes respiratory allergy which could lead to distress and is said to be critical for pregnant women. The substance basically covers the cadaver in a manner which you cannot recognize the anatomical landmarks. The process is called shellac preservation and shellac is mainly found in the Southeast Asia [2]. But this substance is known to be unpractical as it needs a huge amount and/or volume which make it expensive because it is secreted by female Lac insects [2]. The shellac has a complex chemical formula that is due to passing through the gastro intestine system of the insect which causes alteration of the shellac chemical formula that causes change of the shellac’s color to become darker see (figure 1). Apart from formalin and shellac procedure, this paper aims to propose a much better and efficient technique in preserving cadavers. The Sandarac Preservation is natural, safe and practical method which uses resins that are secreted by Arar trees. These are then extracted and cleaned from any woody patch or dust before placing in a closed jar mixed with ethanol by a ratio of 1:2 (sandarac resin to ethanol). Ethanol concentration must be above 80% in order to dissolve the sandarac resin within 24 hours. Parallel to this, the sandarac resin should be 100% diluted to obtain a wanted specimen to be preserved in a jar, for at least 13 days. After the allotted time, the specimen is taken out to dry for 10 days more at room temperature or taking histology slides. The good thing about this method is that, the substance does not need any immediate care, as it can be preserved at room temperature. 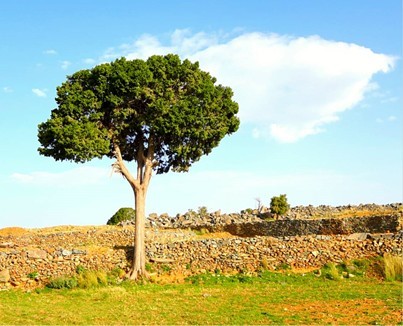 Figure 2: Arar tree in the southern region of the Arabian Peninsula.

Figure 3: The chemical structure of the sandarac resin (abieta-7,13-dien-18-oic acid). 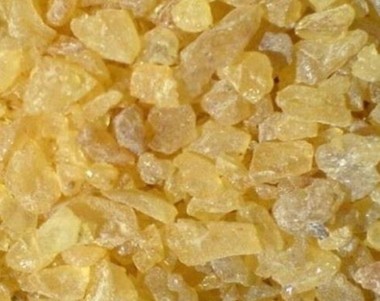 Figure 4: Sandarac tears or gum has a yellowish color.

The aim of this study is to present and test a new preserving technique of cadavers and histology specimens. An experiment will be conducted on three specimens and a photography/microscopy proves of the quality of this technique. In addition, this paper will prove the ability of using this technique as a product that can be used easily.

Cadavers’ part preservation: This method takes a piece of animal muscular tissue extracted from the thoracic region. It contains muscles, fat, and bones (ribs) to be used in the experiment. This tissue will be prepared similar to the preparation method to preserve animal tissue. 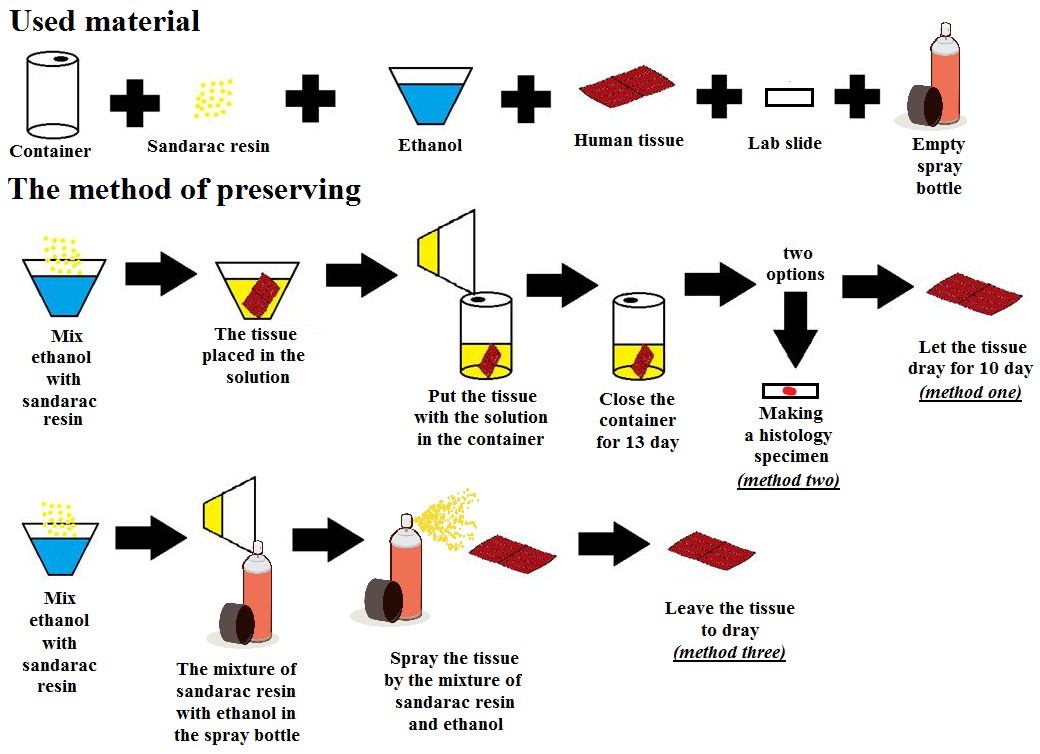 Figure 5: The method of preserving tissue specimen by sandarac resin. 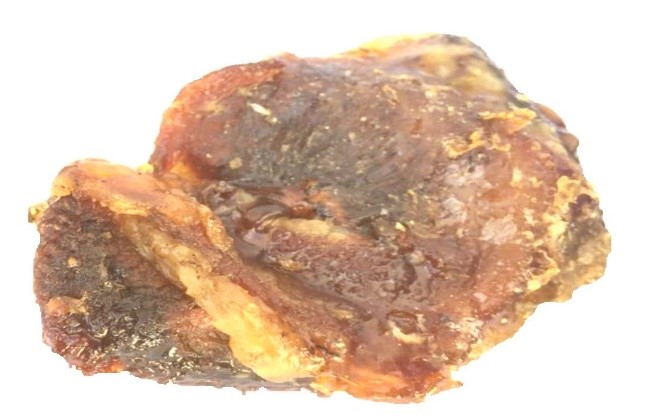 Figure 7: A picture of the preserved tissue shows the superficial fatty layer and beneath muscular layer (top view).

Figure 8: A picture of the preserved tissue shows the superficial fatty layer and beneath muscular layer (side view).

This experiment is formulated due to lack of safe, practical, and affordable preserving methods. Sandarac resin was chosen for many reasons and it is the only preserving that can fit with all the previous conditions. First, sandarac resin does not cause any health issue and it has been approved by the FDA to be used as food supplement for humans which has no effect or toxicities. Second, sandarac resin when used, is transparent which allow seeing the anatomical landmarks of the cadaver when applied. Third, any specimen can preserve wet and can be easily dissected by putting the specimen in a container with the mixture of the sandarac resin and ethanol. This proves sandarac’s practicality. Fourth, sandarac resin has some characteristics that works against fungi and micro-organisms that causes tissue decomposition. Fifth, sandarac resin is a natural substance secreted by Arar tree (Tetraclinis Articulate) see (figure 2) directly in large amounts (direct from the tree to be used as preserving agent). Sixth, the chemical structure of the sandarac resin is simple and compose of the pure abietic acid 99.99% see (figure 4). Seventh, it is a transparent see (figure 3) and it’s very cheap since 1 gram worth $5 or less. Eighth, sandarac resin has low odor due to its purity and sandarac’s smell is acceptable compared to formalin or shellac. The old Egyptians use tree secretions from the trees like pines, cedars, spruce, firs, junipers, etc. Never been mentioned in the literature that Arar tree or what is called “Tetraclinis Articulata” were found in the Egyptian mummies. This tree type does not exist in Egypt or even in the region around Egypt. The secretion of the Arar tree is 99.99% pure Abeita acid compared to other trees from different species. Most of the other species have dark gum or low concentration of the preserving material. The high level of Abeita acid in Arar tree could be caused by the dry weather in the Arab peninsula and Morocco where the Arar trees mainly exist. This method of preserving cadavers and histology specimens see (figures 1,2) can be presented as a product to preserve cadavers in medical colleges and forensic centers as a replacement for the formalin. Moreover, it can be presented as a product to preserve histology specimens in hospitals and forensic centers to preserve histology specimens as slides to be diagnosed see (figure 8). Because sandarac resin preservation method is so cheap, it can overcome all other products and methods of preservation. For example, preserving a cadaver by plastination costs 30000€, while the sandarac resin costs $5 for 1 gram and from $200 to $300 for 45 kilogram of sandarac resin which is cheap. This technique can be used as spray on corpses to preserve human remains as forensic evidence see (figure 10). As well, the sandarac resin preservation method in general can be sold to a company that exports cadavers, human, or animal parts to colleges like; medicine, dentistry, pharmacy, paramedical science, nursing, veterinary, and science (biology). There are many companies for preservation worldwide, one of them in Germany who specializes in exporting cadavers that are preserved by plastination technique worldwide. Another company in the US preserves cadavers by silicon technique, but both mentioned methods are unwanted because the cadavers become stiff and can’t be dissected. Preserving cadavers and histology specimens by sandarac resin applications are beyond what have been mentioned in this paper. This invention was submitted to the patent office to be registered as new technique of preserving of cadavers and histology specimen that can be a potential trademark product.

Figure 10: Sandarac resin mixture with ethanol (as a product that can be manufacture) which can be used as spray for forensic preservation of corpses or human’s remains to be used as an evidence and to determine the cause of death which requires to stop tissue decomposition of the corpse.

This invention was submitted to the patent office to be registered as new technique of preserving of cadavers and histology specimen that can be a potential trademark product. Due to the ability of sandarac resin to stop tissue decomposition, its recommended to focus future studies on using sandarac resin to stop worsen cases like diabetic foot or gangrene.