Welcome to Instant Journal of Hematology and Oncology

A Rare Case of Portal Vein Thrombosis due to Protein S deficiency in a patient with Decompensated Cryptogenic CLD with Portal Hypertension, Completely Recanalized by Single Oral Anticoagulant-Rivaroxaban

Copyright: This is an open-access article distributed under the terms of the Creative Commons Attribution License, which permits unrestricted use, distribution, and reproduction in any medium, provided the original author and source are credited. Copyright © 2020; Richmond Ronald Gomes

Portal vein thrombosis (PVT) is defined as complete or partial obstruction of blood flow in the portal vein, associated with a thrombus in the vessell lumen [1]. The first case of PVT was reported in 1868 by Balfour and Stewart, in a patient showing splenomegaly, ascites, and variceal dilatation [2]. PVT is rare in the general population having been reported with mean age-standardized incidence and prevalence rates of 0.7 and 3.7 per 100000 inhabitants, respectively [3]. However among patients with cirrhosis, these rates jump to between 4.4%-15%, and cause about 5%-10% of overall cases of portal hypertension [4]. Some 22%-70% of patients without cirrhosis demonstrate prothrombotic states and local factors are present in 10%-50% [3-5], although more than one factor is often identified [6]. PVT also shows different clinical presentations in acute vs chronic onset patients. It causes portal hypertension and varix, and if severe, can cause variceal hemorrhage and ischemic bowel disease [7] PVT is classified into four categories: (1) thrombosis confined to the portal vein beyond the confluence of the splenic and superior mesenteric vein (SMV); (2) extension of thrombus into the SMV, but with patent mesenteric vessels; (3) diffuse thrombosis of splanchnic venous system, but with large collaterals; and (4) extensive splanchnic venous thrombosis, but with only fine collaterals. Currently this anatomical classification is mainly used to determine operability, In all cases, patients with PVT should be tested for an underlying thrombophilic condition [6]. Hereditary thrombophilia’s known to predispose for PVT include mutations of the prothrombin, or factor V, genes, and deficiency of one of the natural anticoagulant proteins C, S, or antithrombin III. Fisher et al [8], in a study with twenty-nine adult patients with portal hypertension caused by PVT, found that 18 patients (62%) had deficiencies in one or more of the natural anticoagulant proteins, and six had combined deficiency of all three proteins. Of these, eight cases (28%) had combined C and S protein deficiency, nine (31%) had C protein and antithrombin deficiency, seven (24%) showed protein S and antithrombin deficiency, and six cases (21%), as mentioned, had combined deficiency of all three proteins. We report a case of PVT caused by protein S deficiency that ended in successful reperfusion with single oral anticoagulation therapy by rivaroxaban.

Figure 1: Doppler ultrasound showed the thrombus in the intrahepatic portal vein and the widening of the portal vein diameter. (B) There is echogenic material and flow in the right portal vein lumen and multiple collateral vessels are not shown on the porta hepatis. 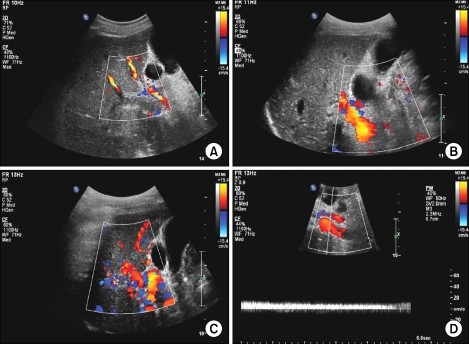 Figure 2: Doppler ultrasound showed (C) There is no echogenic material in the right portal vein lumen and the flow can be observed. (D) The flow and Doppler wave are noted in the umbilical portion of the left portal vein.

Abdominal venous thrombosis is a rare disorder. It presents either as Budd-Chiari syndrome (BCS) or splanchnic vein thrombosis (SVT), but a mixed involvement is uncommon. PVT interrupts blood flow to the liver and causes portal hypertension [6]. Phlebothrombosis is caused by local, genetic, or acquired thrombophilic factors [9]. Local factors include local inflammatory lesions such as neonatal funiculitis, diverticulitis, appendicitis, pancreatitis, duodenal ulceration, tuberculous lymphadenitis, portal vein injury by surgical operations, thrombokinesis, pressure mass effect by an abdominal neoplasm, and portal hypertension by liver cirrhosis [9]. Denninger et al. reported that 6% to 11% of PVT is attributed to liver cirrhosis, and 35% is related to hepatocellular carcinoma [6]. Webb et al. reported that 40% of PVT is caused by intraperitoneal or systemic septicemia. In other reports, 7% of PVT was reported to be caused by chronic pancreatitis [10]. Primary myeloproliferative disorder, antiphospholipid antibody syndrome, paroxysmal nocturnal hemoglobinuria, oral contraceptives, pregnancy, childbirth, malignant tumor, and hypercysteinemia are reported as acquired thrombophilic factors [9]. Genetic thrombophilic factors can be divided into the frequent type, such as factor V Leiden mutation and mutation IIG20210, in which PVT is rarely associated, and the rare type, such as protein C, S, and antithrombin III, in which PVT is more likely to occur [9].Among hereditary risk factors, Factor V Leiden mutation is common in BCS and protein C deficiency is common in portal vein thrombosis (PVT) [11]. Deficiency of protein C is more common than protein S deficiency in both BCS and PVT [12]. However, protein C deficiency is present in approximately 2%-5% patients presenting VTE. Severe homozygous or compound heterozygous protein C deficiency is found in 1 in 500000-750000 live births. Protein S deficiency occurs in 1.35% of the patients with venous thrombosis.The level of protein S was low and that of protein C was just below the normal level in the present case.There is evidence to suggest that thrombosis in unusual sites, such as cerebral sinus venous thrombosis, mesenteric vein thrombosis, PVT, and suprahepatic vein thrombosis (Budd-Chiari syndrome), in young individuals is associated with inherited thrombophilia. Inherited thrombophilia is found in patients with SVT, although making diagnoses of inherited deficiencies of antithrombin, protein C, and protein S is difficult in the presence of liver impairment, which causes a reduced synthesis of the natural anticoagulant proteins [3,13-15]. This difficulty is not seen with the Factor V Leiden and prothrombin G20210A mutations. D-dimer is considered as a marker of hypercoagulable state, besides endogenous fibrinolysis and so, increased D-dimer levels are detectable in patients who are affected by arterial and/or venous thrombosis, as it was seen in the present case [16]. In Mexico, Majluf-Cruz et al [17], studied 36 patients who had thrombosis-related portal hypertension and found an incidence of 30% of protein C deficiency, whereas 9% had protein S deficiency in patients with primary thrombophilia [18]. Similarly in Mexican patients with non-cirrhotic PVT, 31% had protein C deficiency [19]. However, a French study has found a high number of patients with non-cirrhotic PVT showed Protein S deficiency [20] and in a study from United Kingdom, protein S deficiency was found in 38% of patients with PVT [21]. Other cases have also reported C and S protein deficiencies in patients with idiopathic portal hypertension accompanied by PVT [22,23]. Valla et al [20], argue that C and S protein deficiencies do not explain the majority of idiopathic portal thrombosis. Nevertheless, we agree with others that measurements of C and S proteins should be performed in patients with portal thrombosis when no overt cause is located. However, since a low number of cases of PVT may be due to underlying hereditary anticoagulant protein deficiency, this can only be confirmed by careful investigation of background of family members, preferably including both parents. When studies of the parents is not feasible, another possibility might be screening siblings, which could be used for both diagnostic and counseling purposes. Lastly, the recent use of gene sequencing in the elucidation of anticoagulant protein gene mutations may now allow determination of whether such anticoagulant deficiencies in PVT are truly primary or not [24]. Some possible mechanisms for reduction in concentrations of procoagulant and anticoagulant proteins in patients with PVT are

Clinically, PVT is classified as acute or chronic. However, it is difficult to identify when the symptoms begin and even the temporal criteria about chronicity have not yet been established [25]. Malkowski et al. classified PVT as acute or chronic according to symptom onset time before admission (60 days) [25]. Acute PVT typically provokes stomachache, nausea, emesis, and fever. The symptoms can be more severe if mesenteric infarction provokes infarction of the bowel or liver. Nonspecific symptoms such as diarrhea, anorexia, weight loss, and abdominal distention may develop [26]. The symptoms of chronic PVT are similar to the acute ones, but such symptoms may be related to portal hypertension and splenomegaly [27]. Splenomegaly, anemia, leukopenia, thrombocytopenia, and variceal bleeding can be provoked [27]. Our case developed signs of portal hypertension both clinically and on ultrasound imaging. Duplex, Doppler ultrasound, and abdominal CT scan can be used to make a accurate diagnosis of PVT in the early stage, and abdominal MRI can be another diagnostic tool [28]. In particular, abdominal MRI is known to be more useful than Doppler ultrasound in identifying venous collateral development and cavernoma [28]. In patients with PVT, local factors such as liver cirrhosis and pancreatitis should be suspected. If no local factor can be identified, it is necessary to investigate genetic or acquired thrombophilic factors [26]. TE is a non-invasive technique to assess liver fibrosis, which assesses liver fibrosis by calculating the velocity of a low-frequency transient shear wave produced by a mechanical probe that is placed directly on the skin of the patient. Liver stiffness is expressed in kPa. The method is easy to learn (the procedure can be performed by a technical assistant), and results are immediately available. One meta-analysis evaluating the predictive performance of TE in patients with chronic liver disease suggests the optimal cut-off value for the diagnosis of significant fibrosis is 7.65 kPa and for cirrhosis 13.01 kPa [29]. There is no data on the use of TE in PVT, but this method may be useful to determine liver fibrosis in these patients. Complications during follow-up frequently include: esophageal and gastric varices, portal hypertensive gastropathy and bleeding. Portal hypertensive gastropathy is reported to be 44% in patients without cancer and cirrhosis, as was the case with our patient [30]. Therefore, it would be wise to screen all PVT patients endoscopically. Although spontaneous resolution of PVT has been reported in the literature, a specific therapeutic management strategy is necessary.In our case, it was possible to infer that PVT was due to protein S deficiency either secondary to liver cirrhosis or due to inherited thrombophilia.The goal of treatment is similar in acute and chronic PVT, and includes correction of causal factors, prevention of thrombosis extension and achievement of portal vein patency. Currently, anticoagulant therapy is the best way to obtain portal vein recanalization; however, its application is not universally accepted. No controlled trial has been performed on the use of anticoagulants in acute PVT [31]. After 6 months of therapy, complete recanalization has been reported in about 50% of patients, with good outcomes in mesenteric vein involvement, and very few complications. What is certain is that, in acute PVT onset, the sooner the treatment is given, the better the prognosis; the rate of recanalization is about 69% if anticoagulation is begun within the first week after diagnosis, while it falls to 25% when begun in the second week [32]. Thrombolytic therapy may also be effective, but efficacy is significantly lower and mortality increases compared to conservative treatment [25]. Surgical thrombectomy is usually not recommended. Other approaches, such as transyugular intrahepatic portosystemic shunt, should be reserved for liver transplant patients developing acute PVT or as an alternative when anticoagulation fails [33]. In non-cirrhotic and non-neoplastic patients, PVT has shown promising results with overall survival at 1 year and 5 years of 92% and 76% respectively [3,30,34,35]. In many cases, chronic PVT is accompanied by gastroesophageal varix, which can result in variceal bleeding during anticoagulation therapy [26] In the case of acute PVT, however, early anticoagulant therapy can prevent the spread of thrombi and promote blood reperfusion [27]. However, there are no clear guidelines on the choice of anticoagulant drugs, the period of administration, and even the need for anticoagulant therapy [25]. In our case, we successfully treated our acute PVT patient with 6 months single oral anticoagulant therapy with rivaroxaban as initial administration of LMWH enoxaparin caused reversible pancytopenia and there is a concern for bleeding and regular monitoring of INR with warfarin in this patient.

In conclusion, our case shows that PVT can be provoked by protein S deficiency and that the PVT can be recanalized by short-term oral rivaroxaban therapy. Although the evidence is not definitive, existing literature supports the idea that the risk-benefit ratio favors anticoagulation in cirrhotic PVT. Further study is needed to investigate the period of administration, and the dosage and duration for relapse prevention in treatment with oral anticoagulants.