Welcome to Instant Journal of Hematology and Oncology

Copyright: This is an open-access article distributed under the terms of the Creative Commons Attribution License, which permits unrestricted use, distribution, and reproduction in any medium, provided the original author and source are credited. Copyright © 2021; Eyad Fawzi Alsaeed

Using Radiation in patients with systemic lupus erythematosus (SLE), especially if discoid lesions are present within the radiation field, is associated with modest increase in the risk of acute and delayed toxicity. Thus, its use is relatively contraindicated. Here-in we describe a patient with active SLE and grade 4 renal dysfunction who presented with locally advanced cervical cancer Radiologically stage IIB (by CT and MRI), was treated with radiotherapy alone using intensity modulated radiotherapy (IMRT) in 2008. Patient did not experience any grade 3 or 4 acute toxicities which were reported before. Over the last ten years of follow up she did not experience any delayed toxicity, which supports the patient adapted radiotherapy with novel radiation therapy techniques.

Systemic lupus erythematosus (SLE) is a subtype of autoimmune connective tissue disorder that is characterized by circular, red, patchy skin plaques, associated with increased photosensitivity, increased risk of sunburn with multiple organs dysfunction as described in American College of Rheumatology SLE criteria [1]. Numerous case reports in the literature have mentioned unusual toxicity after radiotherapy treatment in patients with SLE [2]. To our knowledge, no case report has exclusively published long term follow up assessment for delayed toxicity of radiotherapy for patient with SLE. Here-in we present ten-year long term follow up of cervical cancer patient with active SLE without any late toxicity. Acute toxicity profile has already been reported.

A 32-year-old lady known to have active SLE for eight years, suffering from hypertension and grade IV lupus nephritis (proved by renal biopsy), was diagnosed as locally advanced squamous cell cervical cancer FIGO stage IIB in 2009. At that time, her renal function tests were within normal limits; antinuclear antibody (ANA) titer was 320, anti-DNA antibody (ADNA) titer was 361, and other immunological serology results were also within normal limits. Chemotherapy was denied that time due to fear of lupus nephropathy. Patient was treated with intensity modulated radiation therapy (IMRT) figure 1 and figure 2. Pelvic radiotherapy with dose of 45 Gy in 25 fractions over five weeks was given to primary tumor and pelvic lymph nodes. The radiation dose was optimized according to the tolerance of critical organs at risk (OAR) i.e., small bowel, bladder, and rectum, skin (normally not an OAR). The dose-volume histogram (DVH) showed a 100% dose delivery to the planning target volume (PTV) figure 3. The differential dose was V45Gy (the rectal volume receiving > 45 Gy) < 1%, V40 Gy of 40%, and V30 Gy of 77%. The differential doses for small bowel were V45 Gy = 0.4%, V40 Gy = 7.6%, and V20Gy = 22%. The acute gastrointestinal (GI) toxicity was graded using the common toxicity criteria- National Cancer Institute of Canada (CTCNCIC) [3]. The gastrointestinal symptoms experienced were: acute nausea during week 1 which was resolved by the end of first week; grade 1 diarrhea started during the 4th week which was controlled by symptomatic treatment. The grade 1 proctitis was observed at the fifth week which was also resolved without any intervention.

Late toxicity was assessed by RTOG grading system. During the ten years of follow up period patient did not experience any delayed toxicity. At the time of writing this publication she was disease free and died because of grade IV nephropathy secondary to SLE. 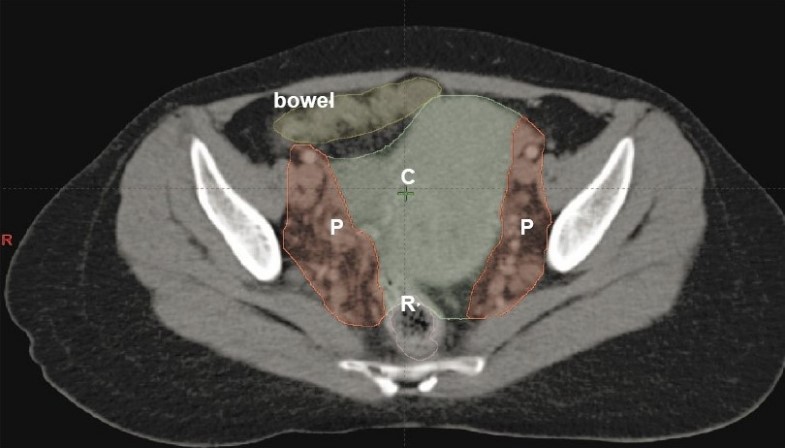 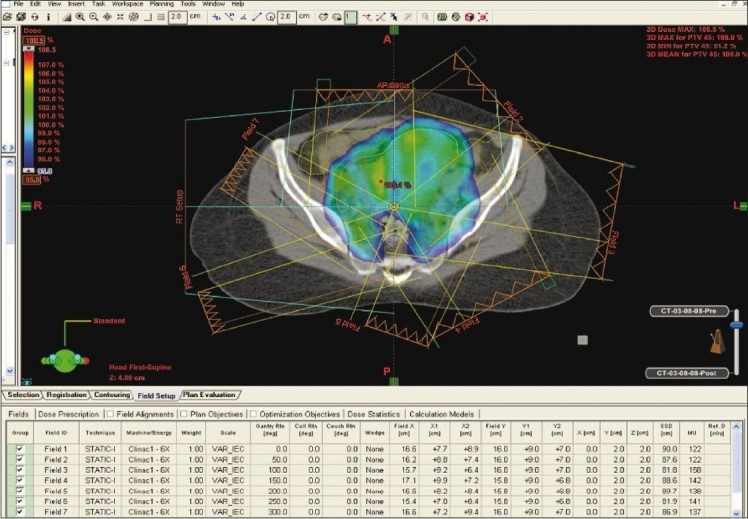 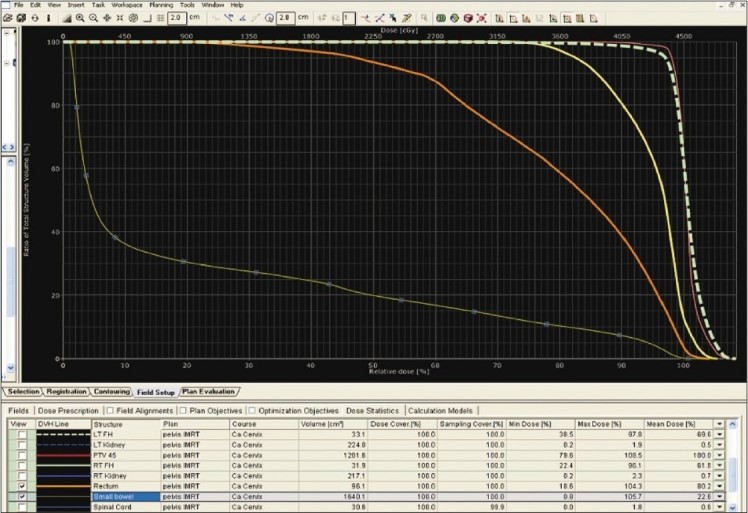 SLE is thought to enhance the risk of radiotherapy-related toxicities [4,5]. Concerns from the possibility of pathologic damage to microvasculature, which could lead to fibrosis, and other effects. The hypothesis that patients with SLE potentially have increased radiosensitivity is supported by numerous case reports that have described exaggerated complications after radiotherapy in patients with SLE [6]. Nevertheless, our patient experienced grade 1 acute nausea and diarrhoea and no late toxicity. A pooled data analysis from Holscher et al. have suggested a less dramatic risk of acute and late toxicity in patients with SLE who received radiotherapy [7].

This is the long term follow up report which reveals that optimal radiation dose to the normal tissues by using IMRT is associated with mild acute and late toxicities and suggests the safer use of IMRT and optimal planning for cancer patients with SLE.