Copyright: This is an open-access article distributed under the terms of the Creative Commons Attribution License, which permits unrestricted use, distribution, and reproduction in any medium, provided the original author and source are credited. Copyright © 2021; Jani DB

In the present study, artificial neural network (ANN) model for a solid desiccant-vapor compression hybrid air-conditioning system is developed to predict the cooling capacity, power input and coefficient of performance (COP) of the system. This paper also describes the experimental test set up for collecting the required experimental test data. The experimental measurements are taken at steady state conditions while varying the input parameters like air stream flow rates and regeneration temperature. Most of the experimental test data (80%) are used for training the ANN model while remaining (20%) are used for the testing of ANN model. Experimental data were collected during cooling period of March to September. The outputs predicted from the ANN model have a high coefficient of correlation (R>0.988) in predicting the system performance. The results show that the ANN model can be applied successfully and can provide high accuracy and reliability for predicting the performance of the hybrid desiccant cooling systems.

A test room having dimensions 3m × 3m × 3m, has been selected for the study. The sensible and the latent cooling loads are taken as 1.371 kW and 0.391 kW, respectively. Sensible heat ratio (SHR) has been obtained as 0.78. Flow rates of the process air stream and the regeneration air stream are measured as 322.7 m3/hr and 196.8 m3/hr respectively. The comfort conditions are taken as 50% relative humidity and 26°C dry bulb temperature. The schematic diagram and the photographic view of solid desiccant and vapor compression hybrid air-conditioning system have been shown in figure 1. The return room air at state 1 passes through the rotary desiccant dehumidifier. Its moisture is adsorbed significantly by the desiccant material and the heat of adsorption raises its temperature up to state 2. The hot and dry air is first sensibly cooled in an air-to-air heat exchanger (2-3) and then in cooling coil of VCR system up to state 4. In the regeneration airline, ambient air at state 6 enters the air-to-air sensible heat exchanger and cools the supply process air. Consequently, its temperature rises when exiting from sensible heat exchanger at state 7. At this point, it is heated to reach temperature at the state point 8 which is high enough to regenerate the desiccant material. Moist air at the outlet of dehumidifier is exhausted to atmosphere at state 9. The rotary desiccant dehumidifier used is 360 mm diameter and 100 mm width. Rotational speed of the dehumidifier is kept constant as 20 rph. Synthesized metal silicate is the desiccant material used in desiccant wheel [35-37]. 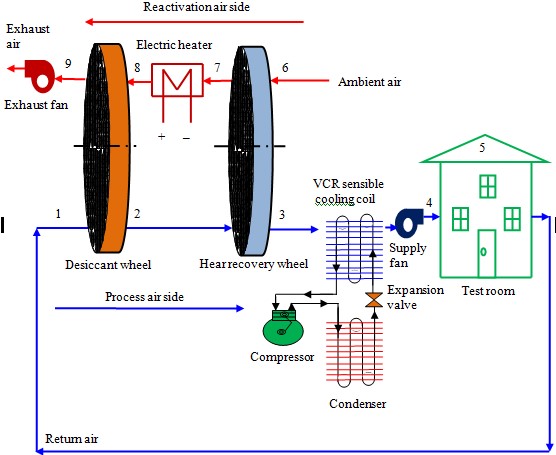