Copyright: This is an open-access article distributed under the terms of the Creative Commons Attribution License, which permits unrestricted use, distribution, and reproduction in any medium, provided the original author and source are credited. Copyright © 2021; Harun Odhiambo

A study was carried out at the Busia Agricultural Training Center (A.T.C), Western Kenya in 2019 to compare the fruit yields of two capsicum varieties from Syngenta seed company at the physiological maturity stages of red and yellow colors. Commandant F1 (red) and Admiral F1 (yellow) capsicum varieties were established under greenhouse conditions in two experimental beds measuring 0.7m by 13.5m. No controls were planted. Drip irrigation system was used with a plant-to-plant and inter-row spacing of 30cm and 40cm, respectively. Both of the two varieties were planted at the same time and subjected the same fertilizer treatments, pest and disease control measures, cultural practices and moisture supply. Data was collected on growth parameters (number of vegetative branches, flower buds and flowers) and yield components (number of fruits and harvest weight). Independent sample t-test was used to compare parameters (number of flowers, flower buds, fruits and the number of branches) for the two colored capsicum varieties, at a probability of p≤0.05. Further analysis involved finding weight and harvest averages for the two varieties. All analyses were performed in IBM SPSS Statistics, version 23. The red-coloured variety produced an average of 9.36 buds per plant compared to 5.2 for the yellow cultivar (p=0.01). Significant differences in the average yield potential of the yellow and red varieties (calculated as flowers, buds, and young fruits) were found between the red and yellow varieties (p=0.02). The red variety had a higher yield potential (19.52) than the yellow one (13.46). Within-variety weight comparison showed that the yellow variety lost a significant amount of fruit mass between the second and third harvest (0.122kg or 61%) compared to the red variety which lost 0.099kg or 58%.

Colored sweet pepper hybrids (Capsicum annuum, family Solanaceae) can be greatly lucrative under greenhouse cultivation. It yields highly under warm climatic conditions free from frost. A temperature range of 25 and 35°C best suits its growth [1]. Also referred to as Bell pepper [2], this vegetable is ranked among the most diverse and widely consumed vegetables around the globe. Its cultivation in Central parts of America was first discovered by Christopher Columbus in the 14th century [3]. High-quality greenhouse-grown capsicum fruits retail up to five times the prices of similar field-grown varieties when sold as red, yellow, orange, or green [4]. The growing global demand for sweet pepper is linked to their nutritional and health benefits. Sun et al. [5], found elevated phenolic compounds, a dietary antioxidant, in colored capsicum hybrids. Other bioactive compounds important in diet that occur in substantial levels in these varieties include vitamin C and carotenoids [6].

In Kenya, colored cultivars have recently been introduced with the primary target market being supermarkets and major restaurants. The yield of different greenhouse-grown colored varieties has not been studied locally and the total output per hectare in the field is based on field assessments by seed companies. The greenhouse provides better opportunities to maximize profits from such high-value crops as capsicum since growth conditions can be manipulated to optimize yields. Fruit yield can be indicated by weight, volume, length, or girth of capsicum fruits at harvest [7]. In general, vegetative growth and fruit size for sweet pepper varies between developmental stages, which are three: logarithmic, linear, and constant state [8]. Comparing fruit yield between colored capsicum varieties across these three phases would indicate the best performing colored cultivar. The objectives of this research were to determine the differences in expected fruit yield between Commandant F1 (red) and Admiral F1 (yellow) capsicum varieties grown under greenhouse conditions and assess within-variety and between-variety fruit weight in the first three harvests.

The study was carried out in Busia ATC in Busia County of Western Kenya. Busia ATC is located at 0.46° N, 34.11° E and experiences a tropical humid climate with an annual temperature range of 14.7°C-30.4°C and annual rainfall range of 1,200mm-1,800mm (mean = 1690mm p.a.). However, the area usually experiences a dry spell during the months of December through March. It lies at an altitude of 1,220m above sea level. The soils where the greenhouse was erected are shallow murram/medium deep sandy-clay rhodic feral soils. However, capsicum crops were grown in soils treated by steaming to kill Ralstonia solanacearum which is a soil borne pathogen associated with bacterial wilt of the Solanaceae family and is highly present in these soils. The potential evaporation of the site is 1,831mm p.a.

Routine management practices involved vegetative-stage pruning, which was stopped upon the onset of flowering to control sunscald on the developing fruits, trellising on 28/01/2019, irrigation at a rate of 1.6 liters per plant done once in every two days, weekly hand weeding and foliar application. Pest and disease management entailed installing pheromone traps on 12/02/2019 and a pesticide and foliar regime (Table 1). The onset of flowering and fruiting were noted on 07/01/ 2019 and 12/01/2019, respectively. Data were collected on fruit yield parameters, i.e., flower buds, flowers, and fruits, as well as on the number of branches on 18/03/2019. The first harvest was done on 1st March 2019 and the harvesting continued through to 10th April 2019 where the first cycle of fruiting was coming to an end. Upon reaching maturity, data were obtained on fruit number and weight during three consecutive harvests separately for the two varieties.

Data was collected on growth parameters (number of vegetative branches, flower buds and flowers) and yield components (number of fruits and harvest weight). Independent sample t-test was used to compare parameters (number of flowers, flower buds, or fruits and the number of branches) for the two varieties of coloured capsicum varieties, at a probability of p≤0.05. Further analysis involved finding weight and harvest averages for the two varieties. All analyses were performed in IBM SPSS Statistics, version 23.

There were slight differences in mean weight of harvested fruits between the two varieties (Table 3). Comparing the two hybrids, it was observed that the red capsicum variety bore larger and heavier fruits than the yellow variety. However, the yellow-coloured hybrid had more fruits per plant than the red variety. 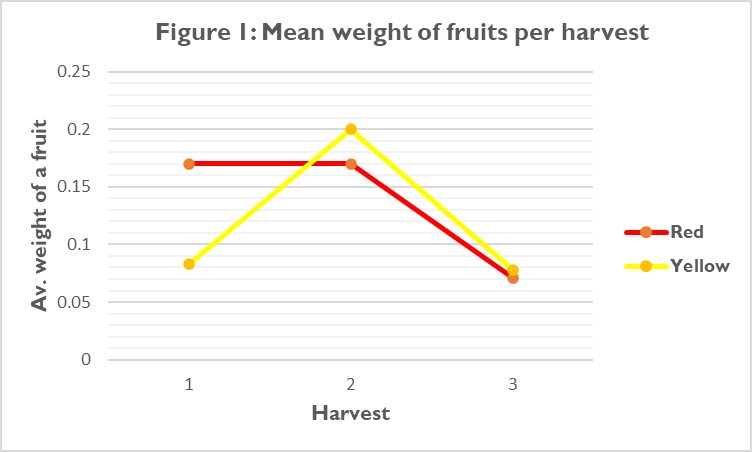 Based on the results of independent t test analysis, significant differences between the two hybrids was found with respect to the average number of flower buds per plant, an indicator of yield potential. Table 2 shows that the variety with the highest value is the red one for which 9.36 buds were measured per plant compared to 5.2 for the yellow cultivar (p=0.01). This result is partially consistent with the data by Biwalkar et al. [7], who reported that Syngenta yellow had less yield per plant compared to Syngenta red (168.74kg/plant vs. 121.60 kg/plant) under a similar fertigation treatment. Thus, the red variety is expected to have a higher yield potential than the yellow one under optimal growth conditions. No significant differences were found in the average number of branches, flowers and fruits per plant between the red and yellow varieties.

Significant differences in the average yield potential of the yellow and red varieties (calculated as flowers, buds, and young fruits) existed between the red and yellow varieties (p=0.02). The red variety had a higher yield potential (19.52) than the yellow one (13.46). This hybrid had a higher number of branches, flowers, fruits, and flower buds, indicating that it had a high dry matter accumulation than the yellow one. Dry matter (carbohydrate) accumulation results from efficient crop canopy use of solar radiation during plant growth [9]. Photosynthetic efficiency expressed in a higher canopy density in the red variety accounts for its greater yield potential when compared to the yellow hybrid.

Plate 1: Yellow and Red capsicum varieties in the greenhouse at Busia ATC. 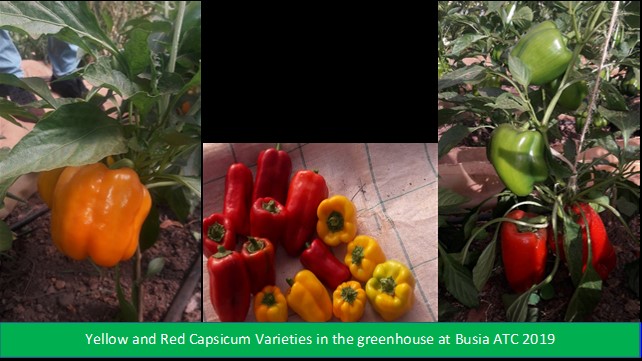 From these results, there was a higher performance for the red hybrid compared to the yellow one in terms of fruit weight in the three harvests. According to Da?gan and Abak [10], crop yield depends on environmental factors, including solar radiation and efficiency in biomass accumulation, which is then distributed to organs such as fruits. Further, the red variety showed sustained average fruit weight, indicating stable photosynthetic capacity due to its superior number of branches [9].

This study sought to compare expected fruit yield between two coloured capsicum varieties: red and yellow, and evaluate fruit weight within each variety and between the two varieties in the first three harvests. Based on the results obtained, the best option for commercial cultivation of coloured capsicum hybrids under greenhouse conditions is the Commandant F1 variety (red). Of the two, it had a superior growth parameter (number of flower buds,flowers, branches, and young fruits). Additionally, its yield potential was found to be significantly higher than that of the yellow variety (p=0.02). The weight of the red-coloured fruit harvested was greater than that of the yellow-coloured fruit. It also had a less yield loss (58%) during the first three harvests than the yellow variety, making it a better-performing hybrid under greenhouse conditions for commercial production.

10. Da?gan HY, Abak K. 2003. Effects of plant density and number of shoots on yield and fruit characteristics of pepper grown in glasshouses. Turk J Agric For. 27: 29-35.