Copyright: This is an open-access article distributed under the terms of the Creative Commons Attribution License, which permits unrestricted use, distribution, and reproduction in any medium, provided the original author and source are credited. Copyright © 2021; Anju Meshram

Euryops pectinatus ‘Viridae’ weed belonging to the family Asteraceae is commonly known as Golden Euryops or African daisy. Present investigation includes phytochemical analysis of methanol extract of Euryops pectinatus weed for the presence of various secondary metabolites. Presence of various secondary metabolites was observed including phenols, flavonoids, alkaloids, steroids, saponins, glycosides, etc. These secondary metabolites are well known for their biological activities like antioxidation, anti-cancerous, anti-microbial, cardiovascular, and anti-aging. After determination of rich secondary metabolites in the methanol extract, mass spectrometric analysis was carried out for the identification of compounds present in Euryops pectinatus. Eight compounds were identified in the methanol extract reported for nematicide, antioxidant, analgesic, antitumor, anticancerous and several other important activities. Thus phytochemical and mass spectrometric analysis would open new doors to natural product research that would be cost effective and safe for the mankind.

Weeds compete with crops for sunlight, water, nutrients, and space. In addition, they harbor insects and pathogens, which attack crop plants. Furthermore, they destroy native habitats, threatening native plants and animals [1]. Euryops pectinatus ‘Viridae’ belonging to the family Asteraceae is a weed and grows easily in full sun on well drained soil. Due to its spreading nature, it affects the growth of other agricultural crops by utilizing available nutrition and space. However, special attention is given nowadays to unwanted weeds as they possess some special properties that make them grow easily under the abiotic stress conditions. Plants are a rich source of phytoconstituents that provide unlimited opportunities for the development of new drug leads. Therapeutic drugs identified from natural products are now acknowledged throughout the world.

Weeds are a serious problem in agriculture and tremendously reduce the productivity of agricultural land by competing with crop plants for space and nutrition. Raipur District is highly occupied with weeds belonging to Asteraceae family, of which several are reported to have medicinal value. Natural products from plants provide unlimited opportunities for new drug leads thus the demand for therapeutic drugs from natural products has grown throughout the world. To overcome the problem of growing pest in agricultural fields and waste lands, and to utilize the locally available flora of the state, it is proposed to identify the bioactive metabolites of these unwanted crop plants and opening new doors for their pharmacological applications. In this proposed work new method is designed using the existing information concerning the use of Asteraceae weeds of Raipur region for identification of their bioactive metabolites that will be cost effective and safe for pharmacological applications.

Plant extracts are rich source of alkaloids, steroids, terpenes, antioxidant phenolics, flavonoids and other biologically active compounds. In modern medicine these compounds have been investigated for their medicinal applications [2]. Botanicals and herbal preparations for medicinal usage contain various types of bioactive compounds [3]. Natural bioactive compounds like phenols and flavonoids are the important secondary metabolites in plants and posses biological properties like antioxidant, anti-aging, anti-carcinogen, protection from cardiovascular, immune/autoimmune diseases and brain dysfunctions viz. Parkinson’s, Alzheimer’s, Huntington’s diseases, etc [4,5]. These active metabolites especially from herbs are the interest subject of research, and their phytochemical or biological investigations open new doors to the natural product research. The aim of present is to analyze the phytoconstituents and bioactive metabolites of Asteraceae weeds collected from the Raipur region with the objective of characterization of secondary metabolites using mass spectrometry.

Euryops pectinatus is endemic to rocky, sandstone slopes in the Western Cape of South Africa [6]. Chhattisgarh is commonly known as Bowl of rice, and in a study of the weed flora of dry land crops in the Chunkatta and Bhilai areas, Asteraceae was found to be second largest in species distribution, most of which may possess useful properties [7]. Another study have shown that highest number of weeds present in Durg district of Chhattisgarh state belongs to Acanthaceae, Asteraceae, Malvaceae and so on [8].

Collection and preparation of plant material

Plant material was collected from Raipur and identified as Euryops pectinatus ‘Viridae’ commonly known as Golden euryops. The samples were washed thoroughly in running tap water to remove soil particles and other adhered debris and finally washed with sterile distilled water. The whole plant was air dried for 24 hours and further used for extraction.

Fresh leaves of Euryops pectinatus ‘Viridae’ (10g) were shade dried for 3-4 days and crushed using mortar-pestle. Extraction was done with methanol thrice for three consecutive days at 28oC (100 ml x 3). The extract was filtered twice with Whatman filter No. 1. Extract was combined and concentrated at 40oC in water bath. The crude methanol extract of E. pectinatus was stored at 8oC for further analysis.

Euryops pectinatus ‘Viridae’ methanol extract were tested for the presence of different classes of compounds [9-11]. Qualitative chemical test were used regarding the nature of phytoconstituents present in the methanolic extract (Table 1).

The preliminary phytochemical screening of the methanolic extract of leaves of Euryops pectinatus ‘Viridae’ showed the presence of various secondary metabolites of which alkaloids, flavonoids, terpenoids, saponin glycosides, tannin and phenolics compounds were the most prominent (Table 2). 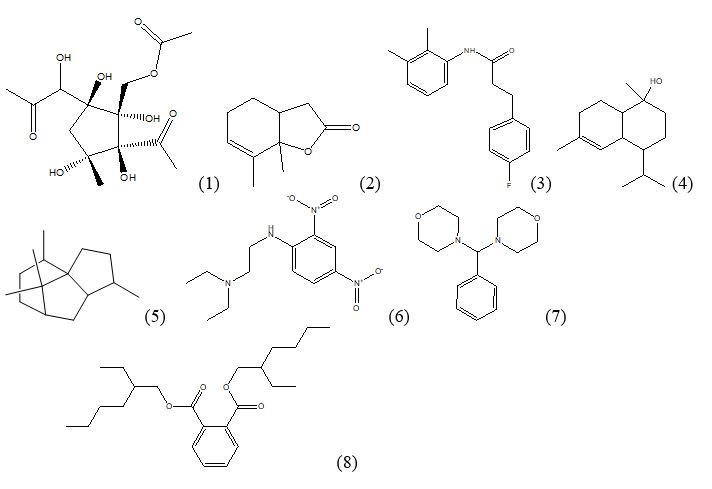 Figure 2: Compounds identified in the methanol extract of leaves of Euryops pectinatus ‘Viridae’ by GC-MS.

For the pharmacological as well as pathological discovery of novel drugs, the essential information regarding the chemical constituents are generally provided by the qualitative phytochemical screening of plant extract [12]. The spectrum for the phytocomponents of the methanolic leaf extract of Golden euryops was determined using GC-MS (Figure 1).

Eight compounds are reported to have biological activity (Figure 2, Table 4). The activity prediction is based on Dr. Duke’s Phytochemical and Ethnobotanical databases and available literature. Compound 1,4-Diacetyl-3-acetoxymethyl-2,5-methylene-l-rhamnitol is also reported in the methanol extract of Aspergillus terreus that showed antibacterial and anti-fungal activity [13]. Similarly another compound a Patchoulane?type Sesquiterpene, 6?Acetoxy Cyperene isolated from Cyperus rotundus rhizomes is reported to induce caspase?dependent apoptosis in human ovarian cancer cells [14].

In the present study, methanolic extract of Euryops pectinatus ‘Viridae’ commonly known as Golden euryops, a weed was analysed using mass spectrometry. Through these results, we can conclude that E. pectinatus can be exploited to isolate and characterize important bioactive compounds for pharmaceutical and industrial applications. Several phytochemicals from plants have recently attracted a great deal of attention, mainly due to their role in anticancerous, antimicrobial, antioxidant properties etc. At present there are so many economically important plant species that are being utilized for their important secondary metabolites. Plants contain secondary metabolites meant for defense against various pathogens. Identification of local weeds belonging to Asteraceae family containing bioactive potential against microorganisms, cancer, etc would open new doors in the field of pharmacology, as use of plants are safe and cost-effective.

The author thanks the Kalinga University Authorities for providing necessary lab facilities for carrying out the work.