Copyright: This is an open-access article distributed under the terms of the Creative Commons Attribution License, which permits unrestricted use, distribution, and reproduction in any medium, provided the original author and source are credited. Copyright © 2021; Arumougame Chanemougame Tangavelou

An important ethnomedicinal plant Chamaecrista nigricans (Vahl) Greene, widely used for antipyretic, appetite, family planning, fevers, sore throat, wounds and various gastrointestinal disorders including diarrhoea and peptic ulcer. In the present study, acute toxicity and hepatoprotective activity of methanol extract alone were carried out in experimental animals approved by the Institutional Animal Ethics Committee. In acute toxicity studies, there was no mortality in animals when the extracts tested as per OECD guidelines. Regarding hepatoprotective activity, methanol leaf extract significantly reduced the increased level of serum marker enzymes such as ACP, ALP, ALT, AST and Total bilirubin. The protective effect of the methanol extract was also confirmed by histopathological examination which supports that the methanol leaf extract repaired the liver damage caused by CCl4. Thus the present study provides scientific evidence to the extracts of their hepatoprotective potential against liver damage and offers lead for further research in drug development.

The genus Chamaecrista (L.) Moench (syn. Cassia nigricans Vahl; family: Leguminosae: Caesalpinioideae) comprises about 330 species [1] in the world most commonly found from Africa to Asia and also in South America. The species Chamaecrista nigricans (Vahl) Greene is an annual undershrub, locally known as Siruavuri in Tamil and commonly found in Thoothukudi, Tirunelveli and Virudhunagar districts of Tamil Nadu State in India. Locally, the leaves are used for the treatment of skin diseases. Traditionally, leaves are used as an appetite, fever, sore throat and various gastrointestinal disorders including diarrhea, peptic ulcer and in family planning [2-7], as an antipyretic and substituted for quinine in Senegal and Guinea and to heal wounds in Bamako region, Mali, West Africa [8]. Chemical constituents such as emodin, chrysophanol, physcion, emodol, emodolanthrone, leucoanthocyanin, diisooctyl ester 1,2-benzenedicarboxylic acid, methyl ester, (Z, Z, Z)-9,12,15-octadecatrienoic acid, nitric acid nonyl ester, 4-C-methyl-myoinositol, n-hexadecanoic acid, 2-methylbutanoic acid and octadecanoic acid have been reported from leaves [2,9-15]. Biological activities such as analgesic, anti-inflammatory, antidiarrheal, antimicrobial, anti-plasmodial, anti-ulcer, contraceptive and estrogenic properties have also been reported [4-7,16-19]. With these significances of medicinal potential, the present investigation dealt with acute toxicity test and hepatoprotective activity of methanol extracts of leaves for liver disorders in drug development.

Leaves of Chamaecrista nigricans (1 kg) were shade-dried, coarsely powdered using a pulvarizer, successive extracted with various solvents of increasing polarity such as hexane, chloroform and methanol using soxhlet apparatus. All the extracts collected were distilled off in a water bath at atmospheric pressure and the last traces of the solvents were removed in vacuo. Only the methanol leaf extract was selected to study the acute toxicity and hepatoprotective activity.

Swiss albino mice (20-30g) and Wistar albino rats (180-230g) were used for the experimental studies. They were kept in polypropylene cages at 25±2°C, with relative humidity 45-55% under 12 h each of light and dark cycles. All the animals were acclimatized to the laboratory conditions for a week before use. They were fed with standard animal feed (Kamadhenu Agencies, Bengaluru, India) and water ad libitum. The experiments were carried out at the Periyar College of Pharmaceutical Sciences for Girls, Tiruchirappalli, Tamil Nadu, India [Approved by the Institutional Animal Ethics Committee (IAEC), Reg. No. 265/2000/CPCSEA].

The oral acute toxicity was determined as per the Organization for the Economic Cooperation and Development 423 Guidelines [20] using Swiss albino mice (20-30 g) which were fasted overnight, provided water ad libitum and divided into two groups of six animals each as given below:
Group 1: control, normal saline (10ml/kg),
Group 2: methanol leaf extract of C. nigricans (2000mg/kg) After oral administration, the animals were observed at the end of each h for 24 h to assess general behavior and mortality. They were further observed for 72 h for toxic symptoms and mortality.

After 24 h of the last dose, all the animals were anaesthetized by anaesthetic ether and blood was withdrawn from the carotid artery and centrifuged at 300xg for 10 min to separate the serum. Serum marker enzymes such as Acid phosphatase (ACP), Alkaline phosphatase (ALP), Alanine aminotransferase (ALT), Aspartate aminotransferase (AST) and Total bilirubin were measured by standard methods [22-24].

Each rat was laprotomized to obtain liver immediately after collecting blood under ether anaesthesia. Small fragments of the rat liver were fixed in 10% formalin solution, dehydrated with ethanol solution from 50% to 100%, embedded in paraffin, cut into 5 μm thick sections and stained using hematoxylineosin dye for photomicroscopic observations [25] including necrosis, steatosis and fatty change of hepatic cells. An Olympus microscope (Olympus BX51, Japan) was used to evaluate the histopathological changes for lymphocytes, myeloid cells and also hyperplasia and necrosis.

All the experimental data are expressed as mean?SEM and subjected to student’s t test by comparing with control [26]. 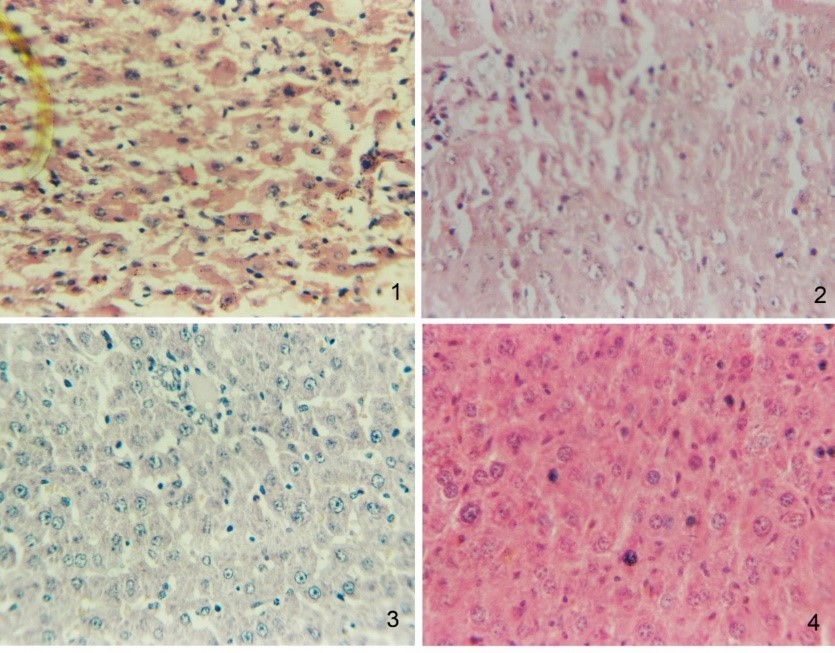 CCl4 has been widely used to induce the experimental hepatic damage [27-35]. The liver damage by CCl4 is related to its biotransformation that is catalyzed by cytochrome P450 dependent monooxygenase especially CYP2E1 [36-38] in the endoplasmic reticulum and mitochondria of centrilobular hepatocytes by two processes such as haloalkylation of cellular macromolecules by reactive metabolites of trichloromethyl free radical or trichloromethyl peroxyl radical [39- 41] and lipid peroxidation, which contribute to the loss of cellular damage and its subsequent death [42,43]. Elevation in serum marker enzymes is the evidence of liver diseases [44-46]. When CCl4 significantly increased the levels of serum marker enzymes of AST, ALT, ALP, ACP and total bilirubin the methanol leaf extract of C. nigricans constantly reduced their elevated levels. Activity is comparable to Silymarin. Thus the histopathological findings of the present investigation revealed that the extracts repaired the liver damage caused by CCl4 to normality by regenerating hepatocytes and concurred by the reduced levels of serum marker enzymes. In C. nigricans, the hepatoprotective activity could be due to the presence of emodin, physcion and chrysophanol in the methanol leaf extract. Furthermore, several workers [47-51] also reported that emodin reduces liver cell damage, attenuates liver function impairment with significant protective effect on Acute Liver Injury and improves the functions. Thus the present study provides scientific evidence to the extracts of their hepatoprotective potential and offers lead for further research in this direction.

In conclusion, the biochemical and histopathological results obtained from this study confirm the hepatoprotective effect of the methanol extracts of Chamaecrista nigricans leaves against liver damage.

The first author thanks the Council of Scientific and Industrial Research (CSIR), New Delhi, for the award of Senior Research Fellowship [CSIR Award No.9/652(13)] to carry out this research work.