Welcome to International Journal of Reproductive Medicine and Sexual Health

Copyright: This is an open-access article distributed under the terms of the Creative Commons Attribution License, which permits unrestricted use, distribution, and reproduction in any medium, provided the original author and source are credited. Copyright © 2019; Amrita Sarkari Jaipuriar

Polycystic ovarian syndrome (PCOS) currently affects nearly 6-10% of women of reproductive age. A frequent feature of women with PCOS is insulin resistance accompanied by compensatory hyperinsulinemia, and increasing evidence suggests that hyperinsulinemia plays an important role in the pathogenesis of PCOS, pointing the way to new and novel therapy for PCOS. The study was planned with one natural alternative remedy Standardized Fenugreek seeds extract as FurostanolicSaponins and Myo-Inositol.Standardized Fenugreek seeds extract as Furostanolic saponins which contains bioactive components Saponins extracted from Fenugreek seeds improves insulin sensitivity and, in turn, may regulate circulating androgen levels. It improves insulin-mediated glucose

disposal in women with PCOS [1,2]. It also decreased theLuteinizing HormoneLH/FSH (Follicle- Stimulating Hormone) ratio as observed in my last study [2-4]. Myo-inositol not only improves fertility by lowering male sex hormones in both, women with and without PCOS but it could also improve ovulation in women with PCOS. In addition, Myo-inositol also reduces insulin resistance and increases estrogen levels. Myo-inositol reduced testosterone, LH, and insulin levels. The present observation study is to establish efficacy and safety in management of IR and ovarian volume.

Our specific objective was to establish the correlation of reduction in ovary volume and insulin resistance in obese women with PCOS, treated with Standardized Fenugreek seeds extract as Furostanolic Saponins and Myo-inositol (Nutricyst-M).

A Single centric, open labelled, single armed and non-comparative observation study conducted in 30 female patients suffering from PCOS with high insulin resistance and Acanthosis Nigricans. The subjects were screened for enrolment on the basis of following inclusion & exclusion criteria:

? Premenopausal women having age between 18-45 years.

? Patients having BMI less than 42.

? Patients willing to give informed consent in writing.

? Women who have undergone hysterectomy.

The allocation of the product was done after screening. Investigational product was consumed by the patients for three months during which capsules of Nutricyst-M BD were given orally to the enrolled subjects.

The efficacy of investigational product Nutricyst-M in PCOS patients was evaluated by the laboratory investigations. The following investigation swere do neat baseline, follow-up month (4 weeks and 8 weeks) and end of the study(12weeks) for efficacy analysis:

Baseline &at the end of the study (after12 weeks)

Nutricyst-M was orally consumed by the patients as BD (Twice a Day) dosage in the form of 500 mg capsule for 12 weeks. The data was compiled and analyzed.

Out of 30 subjects,15 of these patients had hirsutism and the remaining 15 were not and eight women with chronic anovulation. 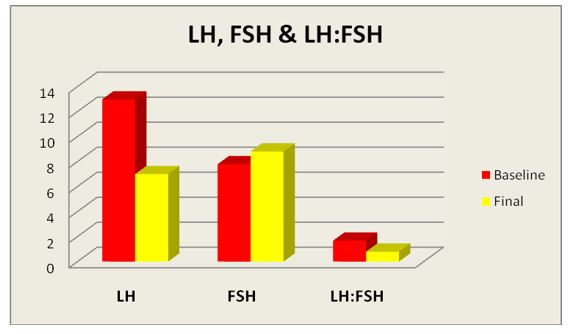 After giving the Nutricyst-M the irregularity of menstrual cycle was significantly reduced and the proportion of subjects having regular menstrual cycle which was 1.1% at baseline increased to 79.5% at final observations. 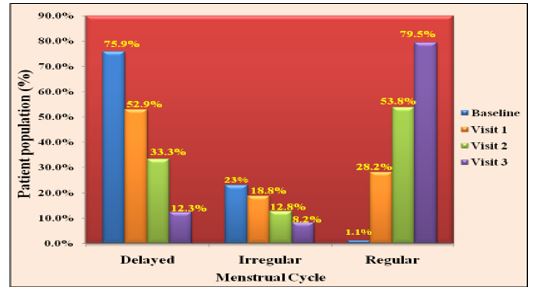 Insulin acts directly on ovary, alone or along with luteinizing hormone, and enhances ovarian androgen production. It can also increase androgen levels indirectly by reducing hepatic production of sex hormone binding globulin (SHBG) and insulin-like growth factor binding protein-1 (IGFBP-1) and thus elevates free testosterone levels and free IGF-I & II levels. Excess androgen impairs folliculogenesis resulting in menstrual disturbance and development of multiple cysts in the ovary. Insulin resistance increases the risk of development of metabolic disorders including diabetes, hypertension, dyslipidemia and cardiovascular events in women. Hyper secretion of the androgens from the ovary is proposed to be the primary event that leads to the development of PCOS by favouring excess luteinizing hormone (LH) secretion and insulin resistance [4]. FurostanolicSaponins regulates the effect of insulin on ovarian androgen biosynthesis, theca cell proliferation and endometrial growth. It improves insulin-mediated glucose disposal in women with PCOS. The presence of insulin-sensitizing compounds i.e. saponins and flavonoids in Furostanolic saponins improves insulin sensitivity. These compounds inhibit the ability of insulin to cross-react with the receptors of IGF and blocks the pathway of insulin like growth factor-I (IGF-I) in theca cells of the ovary. This causes the down-regulation of the ovarian theca cells and as a result, decreases the production of androgens (eg, testosterone, androstenedione). This, in turn, causes the normal LH surge. Because of the normal levels of LH in the ovaries, the ovarian granulosa cells aromatize the androgens to produce estrogens, which lead to increased estrogen levels and results in ovulation. This leads to the lack age of androgens in the ovary. Thus, the circulating androgens level is regulated by FurostanolicSaponins [5]. FurostanolicSaponins causes the regularity in the menstrual period in the study subjects. This was achieved by making normal LH surge which further signals the ovaries to cause ovulation and release the eggs. This might be regulating ovarian androgen production leading to disappearance or decrease in size and number of cysts [6,7].

Increase in LH/FSH ratio has been reported in various studies conducted in PCOS patients. Because of a decreased level of follicle-stimulating hormone (FSH) relative to LH, the ovarian granulosa cells cannot aromatize the androgens to estrogens, which lead to decreased estrogen levels and consequent anovulation. In the present study, a significant decrease in LH/FSH ratio was observed, suggesting the regulated effect of Furostanolic saponins (standardized fenugreek seeds extract) [8] Myo-inositol (MI) supplementation in women with polycystic ovary syndrome (PCOS) has been evaluated over the last few years. Many hormonal & reproductive imbalances associated with PCOS seem relieved by the supplement. It is noteworthy that improvement of IR and reduction of circulating insulin are key therapeutic targets in PCOS. Myo-inositol improves the metabolic profile of PCOS patients. Indeed, studies, revealed effect on fasting serum insulin and on the HOMA index, both of them being significantly decreased after Myo-inositol supplementation.

Myo-inositol is the most abundant form of inositol in humans. It can turn into various derivatives through either epimerization, phosphorylation or methylation of its hydroxyl groups. The NAD/ NADH epimerase, an insulin- dependent enzyme, converts Myo-inositol into d-chiro-inositol, depending on the specific needs of the tissue for these two molecules. Thus, administration of small doses can restore insulin sensitivity and improve the hormonal pattern in obese hyperinsulinemic PCOS patients. Therefore, the administration of Myo-inositol along with Furostanolic saponins might have a greater beneficial effect when the epimerase conversion is impaired in insulin-resistant tissues to compensate. The improvement of insulin sensitivity and the reduction of serum insulin demonstrated by Myo-inositol supplementation are of paramount importance for ameliorating the clinical features of women with PCOS. Indeed, insulin affects the androgenic state not only directly by interfering with metabolism of ovarian androgens, but also indirectly by decreasing circulating SHBG levels. Thus, combination of FurostanolicSaponins and Myo-inositol improves insulin sensitivity and improve the hormonal pattern in PCOS hyper insulinemic subjects [9].

The consumption of Standardized Fenugreek seeds extracts as Furostanolic Saponins & Myo-Inositol (Nutricyst-M) was found to reduce HOMA-IR, significantly improved insulin sensitivity resulting reduction in ovary volume & was effective as well as safe in the management of PCOS. There is need to have bigger study as the sample size of current study was small.