Copyright: This is an open-access article distributed under the terms of the Creative Commons Attribution License, which permits unrestricted use, distribution, and reproduction in any medium, provided the original author and source are credited. Copyright © 2021; Emma Okon BO

The study determined the levels of advanced glycation end-products (AGEs) and malondialdehyde (MDA) in Nigerian cataract patients with and without diabetes mellitus, those with DM but no cataract as well as apparently healthy controls with a view to further elucidating putative pathophysiologic mechanisms for the occurrence of cataracts among our diabetic population. Participants comprised of 30 diabetic patients with operable cataract, 30 non-diabetic patients with operable cataract, 30 diabetic patients without cataract and 17 healthy controls all matched for age and sex, Glycated Haemoglobin levels in whole blood samples were determined using an affinity assay while fasting blood glucose was estimated by the glucose oxidase reaction. AGE was measured using a competitive ELISA kit while the level of lipid peroxidation in plasma was determined by measuring the reaction products between malondialdehyde and thiobarbituric acid. Statistical analysis was carried out using SPSS software (version 23). P<0.05 was taken as significant.

The age range of participants was 52-90 years with a mean of 67.2±0.8. Mean levels of AGE were comparable in patients who had diabetes and cataract, those with cataract but no diabetes and those with Diabetes but no cataracts while healthy controls of similar age group had significantly lower levels. Patients with diabetes mellitus and cataract had significantly higher levels of MDA than those with diabetes only. There was positive, significant correlation between AGE and fasting glucose levels. No significant differences existed between AGE and MDA levels in male and female respondents. We conclude that AGE may serve as a useful index of pathologic conditions, including cataract and diabetes.

Advanced glycation end products (AGEs) are a group of bioactive compounds formed when reducing sugars such as glucose react non-enzymatically with amino groups in proteins, lipids and nucleic acids to form Schiff bases and Amadori products. This process, also known as the Maillard reaction was first described in the 1990s when it was noted that amino acids heated in the presence of reducing sugars developed a characteristic yellow-brown colour. Compounds formed include pentosidine, carboxyethyllysine and N-carboxymethyllysine. Cataract, defined as opacity of lens crystalline is a very common ailment among elderly people and a leading cause of blindness globally. Age related cataract constitutes more than 80% of all cataracts, and a large proportion of the burden is borne by elderly people who live in remote underserved rural communities of most developing countries [1]. In Nigeria, one fifth of adults have some degree of lens opacity [2] while the Nigeria National blindness and visual impairment survey of 2007 reveals that an overwhelming 4.25 million Nigerian adults aged 40 years and above are either visually impaired or blind, with cataract as the commonest cause of severe visual impairment and blindness, being responsible for 45.3% and 43.0% respectively and thus constituting an enormous economic and disease burden [3].

Cataract is also among the earliest micro vascular complications of Diabetes, occurring at an earlier age and 2-5 times more frequently in diabetic patients compared with non-diabetic patients. It is documented that up to 20% of all cataract procedures are performed for diabetic patients and that cataracts are the most common cause of visual impairment in older-onset diabetic patients [4,5]. The disease is associated with conformational changes which can arise directly as a result of post-translational modification of proteins; the key to such modifications being non-enzymatic glycation leading to the formation of advanced glycation end products.

Although the formation of AGEs is known to be part of the aging process, many reports have indicated that it plays a significant pathogenic role in the development of several diseases, chief among which is diabetes mellitus, as a result of persistent hyperglycemia. Glycation is concentration dependent in the early stages of the Maillard reaction and so it is enhanced in diabetes. Advanced glycation is one of the major pathways involved in the development of several diabetic complications including nephropathy, retinopathy and neuropathy and cataract formation, although it is not clear whether AGE is a cause or a consequence of these complications. Moreover, key events in diabetes and ageing such as free radical generation and inappropriate activation of signaling molecules may have important links to or are secondary consequences of advanced glycation processes. Studies have shown that there is positive association between levels of AGE in lens and plasma, indicating that an investigation of levels of AGEs and antioxidants in plasma could provide useful insight into the pathophysiology of cataract. Furthermore, levels of these antioxidants and AGEs could help in distinguishing age related cataract from cataract induced by diabetes. Previous reports have indicated an association between high levels of AGE, low antioxidant levels and the occurrence of diabetes and cataract. Unfortunately, such data are not available in Nigeria which has the highest incidence of diabetes mellitus in Africa with about 4 million diagnosed cases of diabetes as at 2014 [6] and about the same number, if not more of undiagnosed cases due to insufficient levels of awareness and poor utilization of health facilities and where cataract surgery dominates the activities of the eye clinics and keeps the few professionals occupied all year long. The focus of this research work is to determine the levels of AGE and markers of lipid peroxidation in Nigerian cataract patients with diabetes mellitus and those who have normal glucose levels. This is expected to shed some light into the pathophysiology of cataract and provide information which may assist in developing strategies to delay onset of the disease in both diabetic and non-diabetic patients.

The study was conducted at the eye care and endocrinology clinics of the Obafemi Awolowo University Teaching Hospital. Test subjects comprised 30 diabetic patients with operable cataract, 30 non-diabetic patients with operable cataract and 30 diabetic patients without cataract. Consecutive patients meeting the inclusion criteria were recruited into the study until the sample size was attained. Patients with post traumatic, post uveitis or complicated cataract were excluded from the study. Control subjects comprised 17 apparently healthy volunteers without history of diabetes mellitus or cataract. All subjects were matched for age and sex. Informed consent was obtained from all subjects for participation. Ethical approval was obtained from the Ethics and Research committee of Obafemi Awolowo University Teaching Hospital, Ile-Ife. Age, sex, duration of diabetes mellitus and current medications were recorded in a predesigned proforma for all participants. Glycated Haemoglobin levels in whole blood samples were determined using an affinity assay kit which is based on the specific interaction between glycated haemoglobin and boronate ion immobilized within an agarose gel.

Venous blood for fasting blood glucose was collected in fluoride oxalate bottles, centrifuged and the supernatant used for estimation of fasting blood glucose by the glucose oxidase reaction. Commercial kits manufactured by Randox Laboratory were used. Samples for AGE and MDA assays were collected in EDTA bottles, centrifuged and the supernatant stored at -800C until time of analysis. Protein concentration of plasma samples was determined using Lowry method and 10μg/ml BSA was used to construct a standard curve. AGE was measured in plasma samples using Cell Bio labs Oxiselect AGE competitive ELISA kit. The quantity of AGE adducts in the sample was determined by comparing its absorbance with that of a known AGE-BSA standard curve. The level of lipid peroxidation in plasma was determined by measuring the reaction products between malondialdehyde and thiobarbituric acid (TBA) using a modification of the method of Ohakawa, et al (1979) as described by Hashim and Zarina (2006) [7]. Statistical analysis was carried out using statistical package for social sciences (SPSS) software (version 23). Continuous variables from 2 groups were compared using independent T test while those from more than 2 groups were compared using analysis of variance (ANOVA). P values >0.05 was considered statistically significant.

The total number of respondents was 107, comprising 56 males and 51 females. Age range was 52-90 years with a mean age of 67.2±0.8. (Table 1) shows mean age and comparison of mean glucose and glycated Haemoglobin levels across the groups. While (Table 2) shows mean levels of advanced glycated End-products (AGE) and Malondialdehyde (MDA) levels between male and female respondents using independent t test. (Table 3) shows degree and direction of association between AGE and selected parameters (Glucose, HBA1c, Age and MDA). (Figure 1) shows AGE and MDA levels across groups.

Advanced glycation end-products contribute to the development and progression of various disorders related to aging or Diabetes Mellitus. In this study, mean levels of AGE were similar in patients with diabetes and cataract and those with either cataract or Diabetes alone while healthy controls of similar age group had significantly lower levels. This is in agreement with some studies [8,9] which identified AGE as being implicated in a wide range of pathologies without a clear distinction as to whether they are the cause of such pathologies or merely a byproduct. Moemen, et al [9] found statistically significant increase in AGE levels in both senile and diabetic cataract groups compared to controls, and suggested that AGEs play a vital role in both cataractogenesis and diabetes. It has been reported that AGEs are responsible for inducing low intensity chronic inflammation, thereby initiating or aggravating chronic disease [10]. Moreover, AGEs elicit oxidative stress and inflammatory reactions by interacting with AGE receptors in a variety of cells, thereby contributing to the development of disorders such as cardiovascular disease, chronic kidney disease, insulin resistance, Alzheimer's disease and arthritis [11,12]. A role has also been defined for AGEs in the pathogenesis of retinopathy, cataract, neuropathy, nephropathy and cardiomyopathy [8] and it has been identified as an emerging biomarker for adverse outcome in patients with peripheral artery disease [13]. 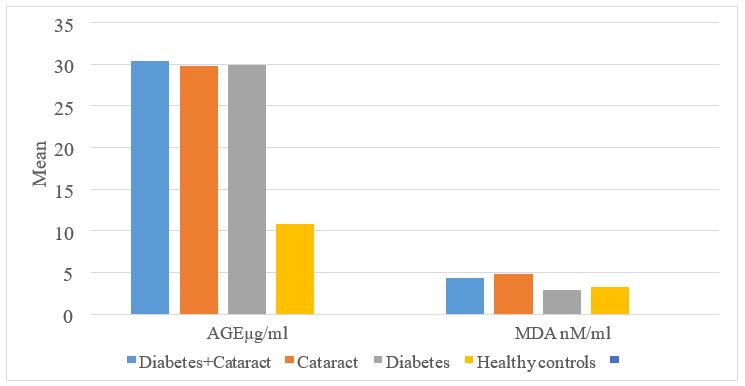 While it is evident that AGEs may play a significant pathogenic part in diabetic complications and other age related disorders [14], the pathogenesis of such disorders is multifactorial and it is clear that advanced glycation, is not the only process leading to cell and tissue dysfunction. Nevertheless, key events in diabetes and other related disorders such as free radical generation and inappropriate activation of signalling molecules may have important links to or are secondary consequences of advanced glycation processes. AGEs have been reported to rise with age and double in diabetes, correlating with the severity of diabetic microvascular disease [15]. It is likely that the AGE levels of diabetic subjects in this study are comparable to those of their non-diabetic cataract subjects because of the low incidence of microvascular complications. Some studies also reported that AGEs rise linearly with age whether they are measured in serum, skin or lens tissue [15-19]. However, in this study, no correlation was found between plasma AGE and age or duration of diabetes. There were also no sex differences. Limitation in sample size may have accounted for this difference.

Generally, it is assumed that there is elevated level of lipid peroxide in people with diabetes. This study however found higher levels of MDA in cataract patients. Again, this is an indication of the fact that high levels of lipid peroxidation could be a general indication of pathologic conditions. In addition, high concentration of lipid peroxidation product may lead to oxidation and aggregation of lens proteins, resulting in cataract [7,20]. This is corroborated by the positive correlation found between AGE and MDA levels (Table 4). The likelihood of AGE levels serving as a general marker of pathological conditions needs to be further explored. It is now possible to measure skin AGE accumulation with the aid of the skin auto fluorescence reader, a device which allows rapid, low-cost and noninvasive estimation of AGE accumulation and its measurement has been found to have positive correlation with plasma levels of AGE [21,22].This is an indication that this AGE reader may serve as a useful aid in the clinic, just like the glucometer and sphygmomanometer. Therapeutic options to reduce AGE include cross-link breakers, AGE inhibitors, RAGE antagonists, nutrition and phytotherapy, although only a few of them have been clinically evaluated [23,24].