Tail flap for eyelid reconstruction: An alternative to the Tenzel flap

Copyright: This is an open-access article distributed under the terms of the Creative Commons Attribution License, which permits unrestricted use, distribution, and reproduction in any medium, provided the original author and source are credited. Copyright © 2021; Golam Haider

Purpose: To describe a technique of eyelid reconstruction with the tail flap method and also to evaluate the post-surgical outcome in a group of patients.

Methods: This was a prospective case series study on nine patients who had undergone an eyelid reconstruction with the tail flap method. The study had been conducted from July 2014 to July 2019. The follow-up continued for six months to one year.

Results: A total of nine patients with ten eyelid defects, 2 (22%) patients had unilateral eyelid coloboma, 1 (11%) had lower lid defect associated with Treacher-Collins syndrome,1 (11%)with bilateral upper eyelid coloboma, only one eyelid undergone lid reconstructive surgery associated with craniofacial anomalies,1 (11%) with Juvenile xanthogranuloma of the left upper eyelid,1(11%) with Basal cell carcinoma in the right upper lid, 3(34%) with Meibomian gland carcinoma 2 in lower eyelid and 1 in upper lid undergone lid reconstructive surgery with triangular flap. Among nine patients, a total of ten eyelid defects were repaired with the triangular flap technique, 5 (50%) in the upper eyelid and 5 (50%) in the lower eyelid. The eyelid defects were completely repaired with tail flap in all patients. All patients were evaluated preoperatively and postoperatively. The cosmetic outcomes of surgical intervention were excellent in 5(50%) cases, good in 3(30%) cases, fair enough in 2(20%) cases.

Conclusions: Tail flap is an alternative surgical method to the well-established Tenzel flap in eyelid reconstruction.

Reconstruction of eyelids is the most challenging in reconstructive plastic surgery. Perhaps no other area of the body provides such a delicate interplay among anatomy, aesthetics and function. In order to protect the underlying globe and vision, the eyelid needs restoration of both function and appearance after eyelid repair [1]. Lid defects are a significant cause of visual deterioration as well as social embarrassment. There are different etiologies for eyelid defects. Depending on the size, location, and extent of the defect, a single-stage reconstruction should be the goal without compromising the aesthetic and functional result. Variable techniques include Tenzel semicircular rotation flap, the adjacent tarsoconjunctival flap combined with a full-thickness skin graft, and the composite graft are used to reconstruct the moderate-sized eyelid defects [2-5]. A new and simpler technique named “the tail flap” is evolving for the reconstruction of moderate eyelid defect. This reconstructive procedure which can be served as an alternative to the well-established tenzel semicircular flap to provide better aesthetic and functional result following repair (Figure 3). The tail flap is a newer technique for lid reconstruction in moderate size eyelid defect. The tail flap, however, has not so far been practiced. In this study, treating nine patients with this technique had minimal complications and good aesthetic results. The main advantage of this technique is that it provides a stable movable lid with an intact lid margin. One step minimum surgical intervention with good aesthetic and functional outcome and can be an alternative of Tenzel semicircular flap (Figure 4).

This prospective case series study had been conducted in Bangladesh Eye Hospital and Institute and Sheikh Fazilatunnessa Eye Hospital and Training Institute in Bangladesh. Ten eyelid defects of nine patients were included in this study. Patients underwent uncomplicated surgical reconstruction from July 2014 to July 2019. Patients were identified from a clinical database. Data collected included patient name, age, sex, diagnosis, laterality, and surgical details, including horizontal widths of defects after excision and horizontal widths of tail flaps for reconstruction, follow-up, and postoperative complications. Ten full-thickness defects of the eyelid were indicated and taken for repair using the tail flap technique. The follow-up lasted over six months to one year. All patients were thoroughly evaluated preoperatively and postoperatively. Surgical cosmetic outcome was graded as excellent, good, and fair in all cases [6]. The procedure involves borrowing adjacent temporal tissue and freeing it up to provide enough laxity to close the defect. The length of the flap should be about twice that of the defect (Figure 1,2). The study had been conducted following the ethical guidelines of the Declaration of Helsinki, and we obtained the Institutional Review Board (IRB) approval. Still, the patient and patient's guardian consent waived for the study.

In repairing the moderate ((33%–50%) eyelid defects, expected tail flap length had been marked. The length of flap should be the double of the eyelid defect. The tail flap started at the lateral canthus of the eye to allow for eyelid mobilization. After canthotomy and cantholysis of the affected eyelid, a triangular shaped tail myocuteneous flap had been made by dissecting the tissue beneath the sub-orbicularis plane, advancement of lateral segment and temporal myocuteneous tissues. The base of the flap was the free end of the eyelid defect and tail is the conical shaped which is located beyond the lateral canthus. The flap was then advanced to fill the defect and also to provide a natural contour to the eyelid margin. The lid defect was closed primarily and anchored the flap tissue to the periosteum of the lateral orbital rim to re-create the lateral canthus. The donor site was re-apposited with deep sutures. Transposition of conjunctiva flap or amniotic membrane graft may be used for the reconstruction of posterior lamella (Figure 5). 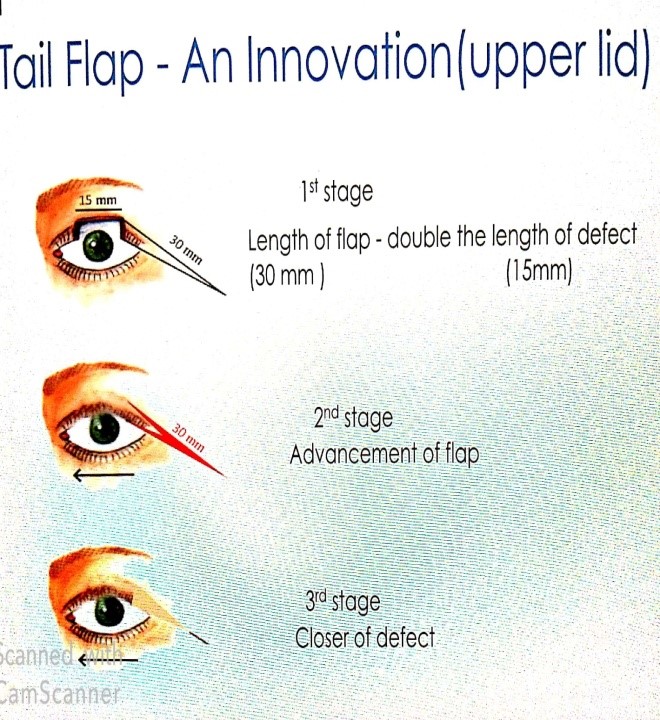 Figure 1: Diagrammatic picture of the tail flap in upper eyelid. 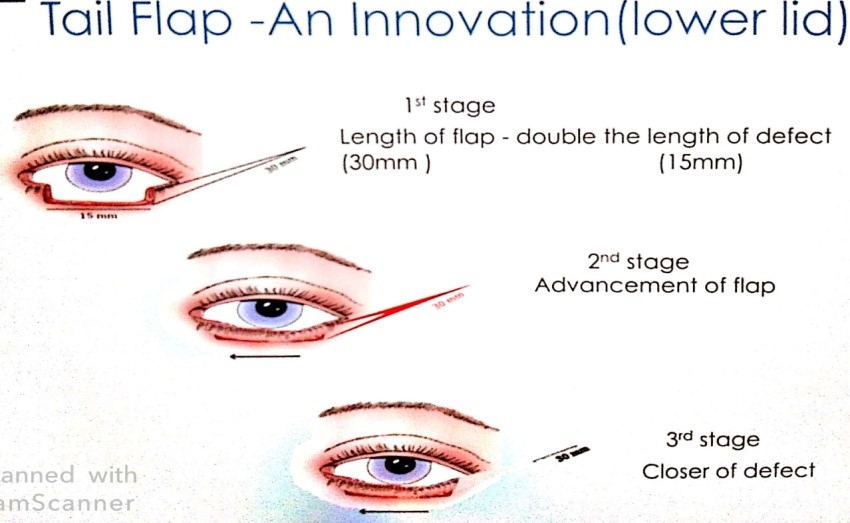 Figure 2: Diagrammatic picture of the tail flap in the lower eyelid. 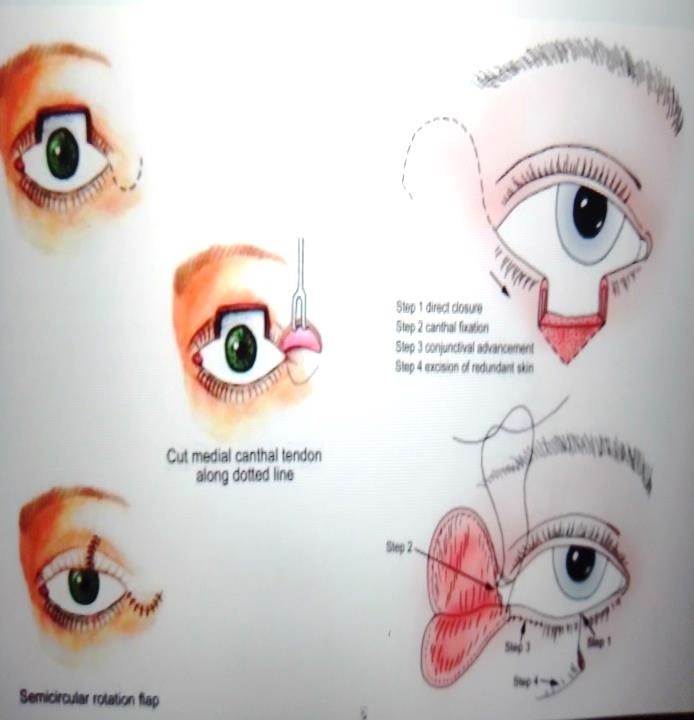 Figure 3: Diagrammatic picture of the semicircular flap (Tenzel flap) in both upper and lower eyelid. 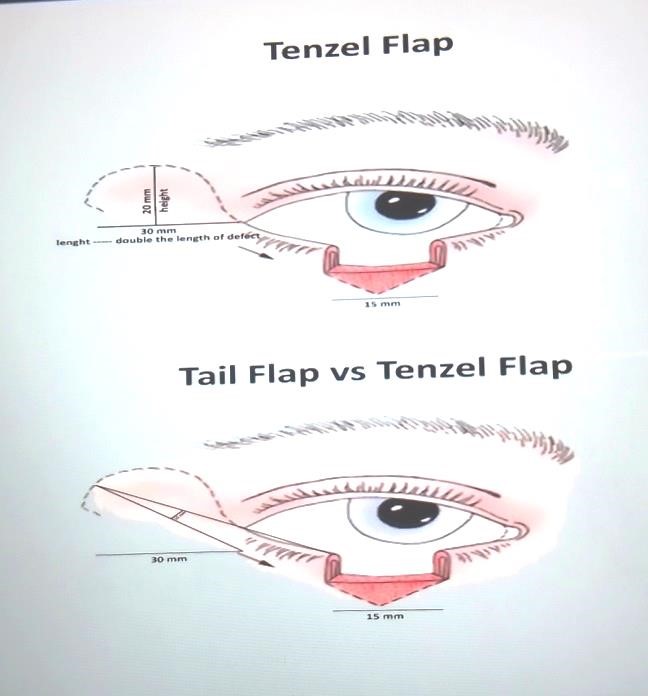 A Total of 10 eyelid defects of 9 patients were evaluated and repaired with the tail flap technique. Among nine patients, the upper eyelid was affected in 5 (50%), and the lower eyelid was in 5(50%). With the tail flap technique, the eyelid defects were completely covered in all cases. A comparison between preoperative and postoperative evaluation showed a gratifying result. The surgical outcome was graded as excellent in 5 (50%) cases, good in 3 (30%) cases and fair in 2(20%) cases. Patients were satisfied with good aesthetic results, only lid notching was present in 2 cases.

Figure 6 (a-d): A 1-year-old boy was diagnosed with juvenile xanthogranuloma of the left upper eyelid (Table 4, ID -2). A full-thickness wedge shaped upper eyelid excision was made under general anaesthesia and reconstructed the upper eyelid by a triangular (tail) flap. Grading of postoperative outcome was excellent after six months of surgery.

Figure -7: A 2-year-old girl was diagnosed with congenital coloboma of the right lower eyelid (Table 4).

The goals of reconstruction of a full-thickness eyelid defects are to provide the patient with a movable and stable eyelid margin which will protect cornea and minimize vertical tension on the lid. This will produce a smooth posterior surface and restore an excellent aesthetic appearance. The issues of advancement of the lateral myocuteneous tissues of the periorbital region and the cheek in the medial direction for correction of defects of the eyelids, especially the lower lid, have been discussed in numerous papers. There are numerous procedures for the correction of different sizes of the eyelid defects. Direct closure with or without canthotomy and or cantholysis have been used for less than 1/3rd (<33%) of eyelid defect, and eyelid defects involving more than half (>50%) are likely to require eyelid-sharing techniques. Several surgical techniques have been used for the reconstruction of medium sized (33%-50%) eyelid defects. Tenzel rotation flap, the adjacent tarsoconjunctival flap combined with a full-thickness skin graft, and the composite graft are used to reconstruct the moderate sized eyelid defects [2,4,5,6]. To our knowledge, the use of tail flap for lid reconstruction has not been reported yet. The tail flap may be used when additional tissue is needed or when a defect is up to 50 per cent. Among ten full- thickness eyelid defects in nine patients underwent surgical intervention with Tail flap. The surgical outcome was graded as excellent in 5 (50%) cases, good in 3(30%) cases and fair in 2(20%) cases. Several surgical techniques have been used for the reconstruction of medium size eyelid defects [2-3,5,7]. The lid notching has been noted as complications in only two subjects. A prospective interventional study showed graded cosmetic outcome as good to excellent in 8 of 10 patients with full-thickness eyelid defect having half to two-third of eyelid width. The eyelid defect has been reconstructed by a lateral eyelid rotation flap [7]. Tenzel et al. described a modified lateral advancement-rotation flap as a technique of eyelid reconstruction. The procedure has been used to reconstruct thirty-six lower eyelids and five upper eyelids in 40 patients, with a follow-up period of six months to six years. The early and long-term cosmetic and functional results have been gratifying [8]. Tenzel semicircular flap has preferred as a workhorse flap for moderate defects of the upper and lower eyelid. The flap is created by dissection in a sub orbicularis at the lateral canthus, then extending superiorly and inferiorly in a semicircular pattern with a gentle slop [9]. Tenzel flap is really effective procedure that works equally well in lower and upper lid repair [10,11]. There are some complications noted after eyelid reconstruction by Tenzel flap. Lateral canthal webbing, ectropion, eyelid notching, symblepharon, and tissue fullness of lateral eyelid have observed after Tenzel Flap [12].

In our study, the tail flap is a newer evolving technique for the moderate size of eyelid defect and a good alternative to the Tenzel flap. The Tail flap, however, has not so far been practiced. The main advantage of this technique is easy, less time consuming, less tissue involvement, minimally invasive, one-step surgery resulting in a satisfactory surgical outcome. The literature reported that the width of the flap nearer to the fault has never discussed to get good aesthetic results. The length of the tail flap should be twice the length of the eyelid defect. So, the tail flap is reducing the tension that will help the proper alignment of the eyelid tissues. If the length of the flap is small, the advancement of this skin is limited so the tension of the flap will increase and there is a chance to develop skin contracture. The tail flap is the modification of McGregor zetaplasty flap [13] and Tenzel semicircular flap. A study reported on a modified Tenzel flap for the reconstructions of extensive eyelid defects [14]. The learning curve is less than others similar pattern of procedures. This technique is a one step, minimally invasive procedure. A drawback of this study is the limited number of treated cases. More patients need to be studied to evaluate the efficacy of this technique compared with existing methods to reconstruct eyelid defects.

11. Doran M. Putting It Back Together. Ref.: https://www.aao.org/eyenet/article/putting-it-back-together