Copyright: This is an open-access article distributed under the terms of the Creative Commons Attribution License, which permits unrestricted use, distribution, and reproduction in any medium, provided the original author and source are credited. Copyright © 2021; Ehab M Ghoneim

There is no enough knowledge about the accuracy of intraocular lens (IOL) power calculation formulas in steep corneas. This study may be the first one that compares the accuracy of the SRK II formula with Holladay1, Hoffer Q and Haigis formulas in steep corneas. We reported a case of a 60-year-old female, with a cataract in the left eye and with a steep cornea. We used the modern formulas; Holladay1, Hoffer Q and Haigis. The result (+7.0D) was unexpected compared to the manifest refraction and to the IOL power calculated in the right eye using the same formulas which was (+17.0D). We implanted (+12.0D) Sensar 1-piece IOL depending on our clinical experience. The post-operative refraction was (+0.00/-1.75axis106). Postoperative, we used the patient data to find the best formula in this case. We found that the SRK II (A118) result was (+11.5D) and thus this formula was the most accurate in this case.

Nowadays, we have many theories that predict the IOL power post- operatively. Regression theory SRK and the modified SRK II have been replaced by the modern third and fourth generation formulas; Hoffer Q, Holladay I, and Haigis. In eyes with average axial length, the IOL calculation formulas show accurate results [1]. With flat or steep cornea, there is no single highly accurate formula and thus many surgeons use more than one formula in these situations [2]. In a case series study, Thebpatiphat et al compared SRK, SRK II, and SRK/T for calculation of IOL power in high corneal power. SRK II had the most accurate results compared with the other 2 methods [3]. We don’t have studies that compare the SRK II formula with the modern formulas in a steep cornea. Faramarzi et al concluded that IOL power calculation in steep corneas with Holladay1, Hoffer Q, Haigis, and SRK/T had shown good results [4]. Our case was within normal range axial length but with an average K reading outside the normal range. Hence we considered several formulas; Hoffer Q, Holladay 1, and Haigis. But because the result was unexpected compared to the manifest refraction and the IOL power of the other eye, we implanted the IOL depending on our clinical experience. Then we used the patient data post-operative to compare the SRK II theory with the modern formulas in such a case.

A 60- year-old female was presented to our hospital with cataract OS. She was (-1.5/ -2.25 axis100 OD & - 5.75 OS). Axial length was (23.76 mm OS) but the K- readings were high; K1 = 50.88 and K 2 = 54.12 D. Hence, we have performed the modern third and fourth generation IOL calculation formulas; Holladay 1, Hoffer Q, and Haigis using the Lenstar optical biometry. It was a surprise to us that the result of biometry was +7.0 D (Figure1). When we looked at the result of the right eye, in which we used the same formulas, we found the IOL power was +17.0 D using Holladay1 and Haigis and it was +16.5 D with Hoffer Q. These results increased our doubts about the accuracy of the result of the left eye. The axial length of the right eye was 23.09mm, K1 46.69. K2 48.95 OD. So the only obvious difference between both eyes was the corneal power. We implanted +12.0 D Sensar Monofocal 1-piece IOL depending on our clinical experience. The early postoperative refraction was (+0.00/-1.75axis106). Postoperatively, we used the patient data to get the IOL power by the SRK II formula. The surprise that it was the most accurate result (+11.5 D) using A118 (Figure2, A&B). Measurements were repeated for each formula three times. We found that the SRK II may be superior to the Holladay1, Hoffer Q and Haigis when the corneal power was more than + 49.0D. In the right eye where the average K reading was less than 49.0D, there was no such difference between SRK II and the other formulas.

Sanders, Retzlaff, and Kraff developed the SRK formula through analysis of data obtained from a large number of eyes in which IOLs have been implanted [5]. The SRK formula states that; P = A- (2.5 AL) - (0.9 K). Where P is the IOL power in diopters; A is a constant for a particular model of IOL within the eye; AL is the axial length in mm; K is the average keratometry reading in diopters. The multiplication constant value for K reading is 0.9 while the multiplication constant for the axial length is 2.5 and so the error in axial length measurement will lead to more error in IOL power calculation than the error in K readings. This formula was modified in 1988 to the SRK II which showed more accuracy for eyes with short or long axial length. Modern formulae have been used as Holladay1, Hoffer Q (third generation), and Haigis (fourth generation). When the corneal curvature increases above average, all formulas decrease in their reproducibility [6]. In our case, the surprise was that the SRK II was more accurate than the modern third and fourth-generation formulae (Table1). This case was within normal range axial length but the average corneal keratometry was more than 49.0D. Because we used the same data from the same patient and measurements were repeated, we assume the results were accurate. This information may be useful for colleagues when facing this situation in the operative theater. And due to the lack of studies in biometry of steep cornea, this may be a good area for further research. 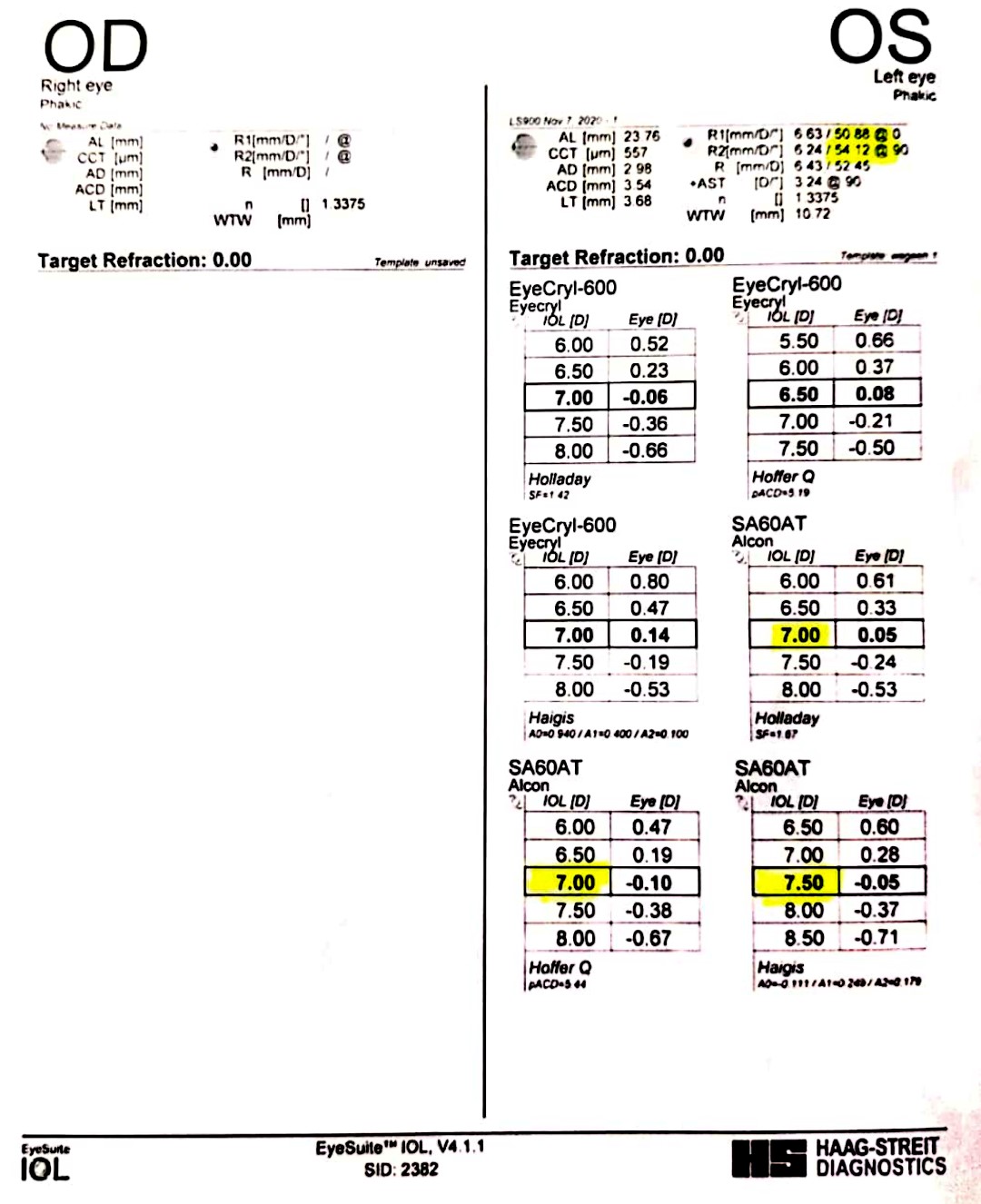 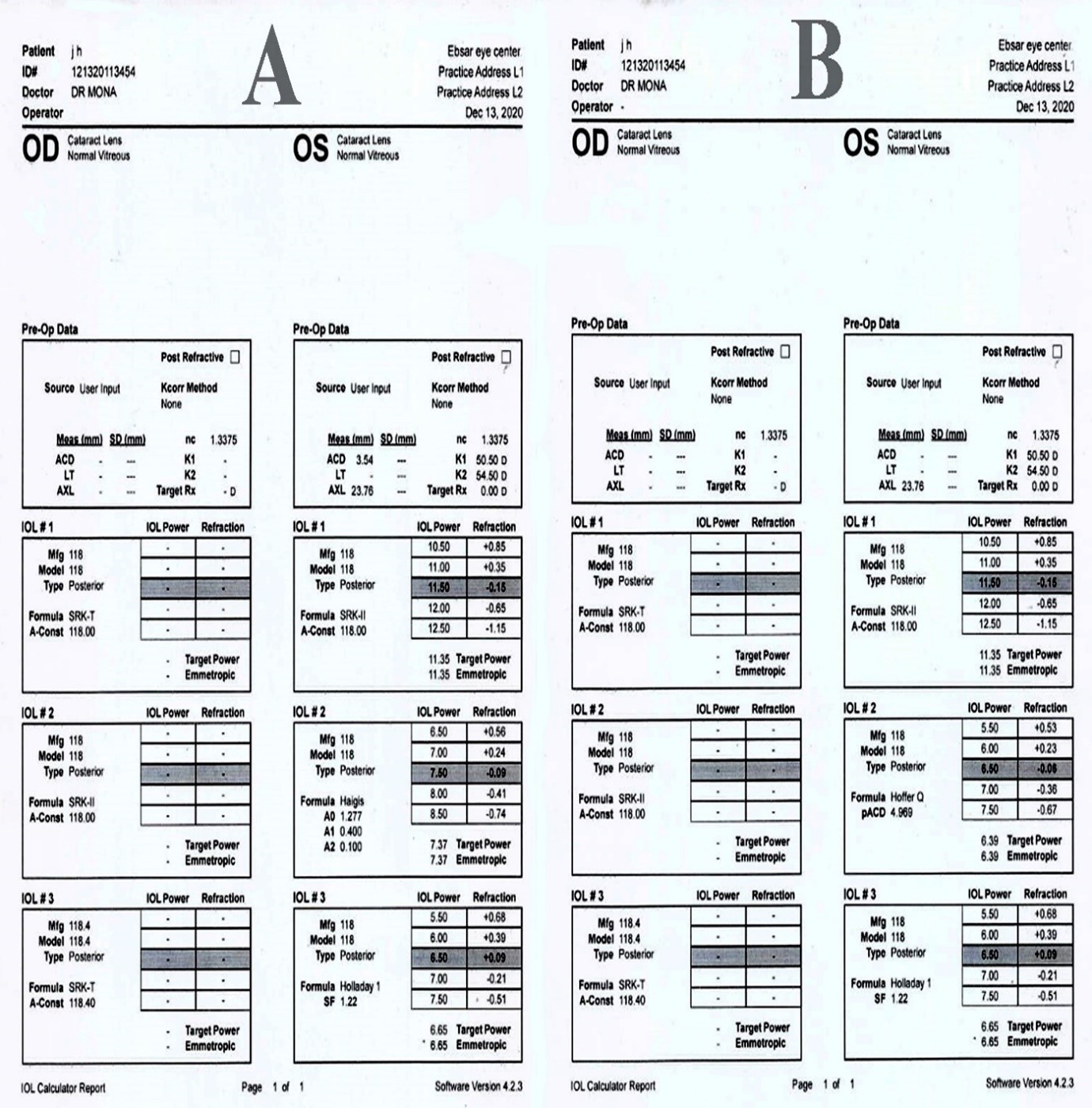 SRK II formula is easy and as accurate for eyes with average axial length as the modern formulas. When average corneal power is more than 49.0D this formula may be the best compared to Holladay1, Hoffer Q, and Haigis formulas. Further studies may be necessary to confirm our results.