Welcome to Universal Journal of Chemistry and Applications

Supercapacitor: The future of energy system

Copyright: This is an open-access article distributed under the terms of the Creative Commons Attribution License, which permits unrestricted use, distribution, and reproduction in any medium, provided the original author and source are credited. Copyright © 2022; Ayan Mukherjee

The development of energy storage system essential for renewable energy can solve the energy crisis along with environmental issues. There are different types of energy storage devices like battery, capacitor, etc. Battery has high energy density whereas capacitor has high power density. Therefore, battery can store huge amount of charge but its required large time for charging and discharging. So, a new efficient device was designed, named supercapacitor, which have both the advantages of battery and capacitor. This paper discussed the mechanism of supercapacitor along with its advantages and disadvantages. Also, future scope of supercapacitor was depicted in this article.

Upgrading of energy storage is very much essential for the modernization of modern-day electronic gadgets like laptops, camera smart-phones, smart watches, etc. The size of devices is gradually decreasing day by day and therefore it is very much difficult to design them efficiently. The main driving force behind any state-of-art device is its power supply. Energy crisis and increased environmental issues have forced us to create more and moreclean renewable energy. [1] But commercialization of renewable energy is largely dependent on energy storage system. [2] Energy storage technology has great potential to compensate the intermittency problem of different renewable energy sources by storing the generated intermittent large energy and then making it available upon demand. So, we have to develop excellent energy storage system for our prosperous future development.

In electronic devices energy is stored mainly in two ways: 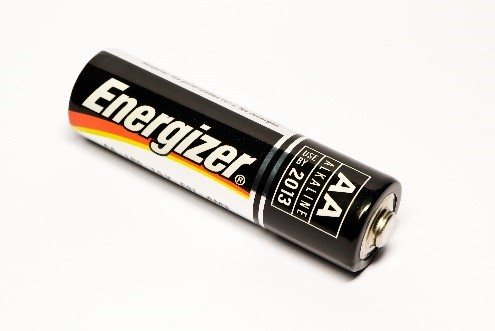 a) Battery: Battery is a structure having one or more cells, in which stored chemical energy is converted into electricity. A battery has mainly three components- one positive electrode, one negative electrode, and electrolyte. Electrolyte fills the gap between electrodes and it is in liquid or paste form. Now a day solid electrolyte is also there. Electrolyte must be able to conduct charged atoms/molecules without allowing electrons to pass through it. [3] As a consequence, electrons are forced to leave the battery through external terminals of the circuit. But at OFF state the electrons can’t move in circuit. This helps chemical reactions to happen on the electrodes of the battery which helps to store energy. So, a battery generally consists of electrochemical cell which is charged electrically to supply a static potential for power or released electrical charge when essential. In battery system, energy is stored in chemical form. It charges and discharges through chemical reaction that produces a specific voltage. In rechargeable batteries, the process of conversion of chemical energy into electricity can be reversed by means of an external electrical energy to restore the charge. [4] Thus, the battery is able to afford a steady DC voltage supply. Battery is capable to store more energy per weight (i.e., battery has high energy density) but it discharges slowly. Battery has also limited cycle life and ample sensitive to temperature fluctuation.

b) Capacitor: Capacitors are devices comprise of one or more pair of conductors separated by insulator and store energy in the form of electrical charge accumulated on their plates. It is generally made up of two parallel plates which are separated by air or insulating material such as paper, mica, ceramic, etc. known as the dielectric. One plate of the capacitor is positively charged whereas the other has negative charge. The total amount of charge stored in a capacitor is always proportional to the potential difference between the two plates. The energy is stored in a capacitor due to persistence of electric field. The capacitance of any capacitor depends on size, shape, distance between the plates and dielectric medium. Actually, the misconception about capacitor is that it stores charges. But, when charge enters into one plate of a capacitor, an equal quantity of charge leaves the other plate. The total charge in a capacitor is always equal to zero. So, capacitor does not store electric charge, it stores electric energy in the electric field. When used in DC circuit, a capacitor charges up to its supply voltage. But direct current cannot flow through capacitor plates due to insulating dielectric layer exist between them. Therefore, an electric potential developed between the two plates of capacitor and it causes electrostatic field. The dielectric medium between capacitor’s plates becomes polarized due to inducing electric field. As long as there is a voltage difference at the two plates of a capacitor, there is an electric field between them and this electric field produces charge imbalance in the capacitor. This disparity of charge helps the capacitor to store applied voltage in form of energy. As soon as electric current starts to flow through the capacitor, charging starts. As a result, the electrostatic field becomes more and stronger as the capacitor stores more and more energy. The current flows out of the capacitor in discharging process. The potential difference between the two plate’s declines along with electrostatic field as the energy departs of the plates [5].

At present, battery, particularly the lithium-ion battery is leading the energy storage sector. Lithium-ion batteries power most of portable modern electronic devices. [3,6] The main advantages of battery are high energy density and good storage capability, but its high energy density often causes danger such as explosion in battery, blowing up of electronic cigarette. Usually, the performance of battery is overall superior in respect of conventional capacitor with regard to energy storage capacity, but a capacitor can be charged and discharged very rapidly in comparison to a battery. So, conventional capacitor has high power density but suffers with low energy density, whereas, battery has advantage of high energy density but much low power density. Therefore, in battery system, the power will last for long period. But to recharge the device, the charging time will be much more. Whereas, capacitor will release their energy quickly, but can be recharged in no time.

Supercapacitors is also termed as Ultra capacitors. Supercapacitor combines the energy storage properties of batteries along with the power discharge characteristics of conventional capacitors. [7] In fact, supercapacitors follow identical elementary equations as followed by typical capacitors, though expansive electrodes and thinner dielectrics helps to achieve larger capacitances. This increases the amount of energy density than conventional capacitors and power density than those of the batteries. Now we will be able to charge our phone faster (high power density) as well as it can be stored for longer time (high energy density). As a result, super capacitors are becoming more and more attractive system for power solutions in view of future applications.

There are two key differences between ultracapacitors and conventional capacitors. Ultracapacitor’s plates (Electrodes) have a much larger effective surface area and the separation between two plates (Electrodes) is much smaller, because the separator used between them works in a dissimilar way than conventional dielectric. The high specific surface area and thin inter electrode distance increases their energy density as amount of energy stored in a capacitor is always proportional to the surface area and inversely related to the gap between the electrodes. Supercapacitors or Ultracapacitors have enormously high energy density. Unlike a battery, no chemical reaction takes place in supercapacitor. Energy is stored as static charge. Supercapacitorsare often charged and discharged in no time. So, supercapacitoror ultracapacitors has high power density with much higher charge-discharge cycle life. Conventional dielectric is not used in supercapacitor. In place of that, both electrodes are soaked in an electrolyte and separated by a very thin insulator. Generally, those are made of carbon, paper, or plastic and known as separator. 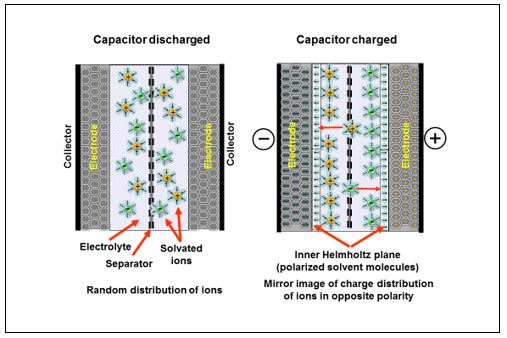 When the electrodes are charged up, an opposite charge forms on either side of the separator, which is termed as electric double-layer. The width of this layer is very small, maybe just of one molecule thick. Enhancement of capacitance due to formation of electric double layer is known as Electric Double Layer mechanism. This type of super capacitors is called electric double-layer capacitors (EDLCs) [8]. Supercapacitor also stores energy by another method termed as pseudo-capacitance mechanism. In that case, capacitance arises due to electron transfer redox process. Pseudo-capacitance type of supercapacitor can store charge relatively high amount than EDLC. Supercapacitors store energy in either by Electric Double Layer Capacitor (EDLC) or by the pseudo capacitance mechanism or by both. When both mechanism acts at the same time then it is called Hybrid Supercapacitor [9]. Hybrid supercapacitors are of many types such as asymmetric, composite and battery-type. 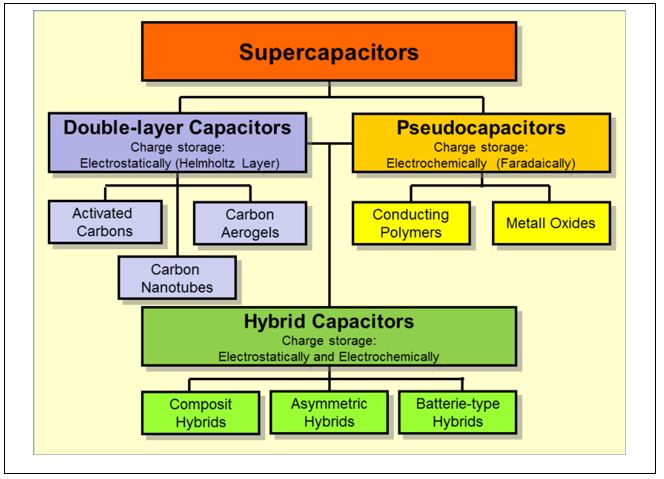 Supercapacitors have several advantages which have made it excellent storage systems for future applications. The advantages are:

? Long life: Supercapacitor has large cycle life. It works for very large number of cycle (about 1 million) without perceptible performance degradation.
? Rapid charging: It takes least time (milliseconds to seconds) to completely charge the system.
? Low cost: The advance designing of supercapacitor requires very small amount of material and generally low-cost materials are used. Thus, supercapacitors are inexpensive.
? High power storage: It stores enormous amount of energy in a tiny volume.So the power storage become too high.
? Faster release: Supercapacitor releases the energy rapidly compare to battery system.
? Supercapacitor have simultaneously high-power density and high energy density. The combination of power density and energy density has made supercapacitor more attractive for practical uses.
? It does not contain toxic element for environment. It is an environmental friendly device.
? It has less size and weight, for which the space requirement is less.
? A wide range of operating temperature -40ºC to 70ºC is also very useful for all over the globe. 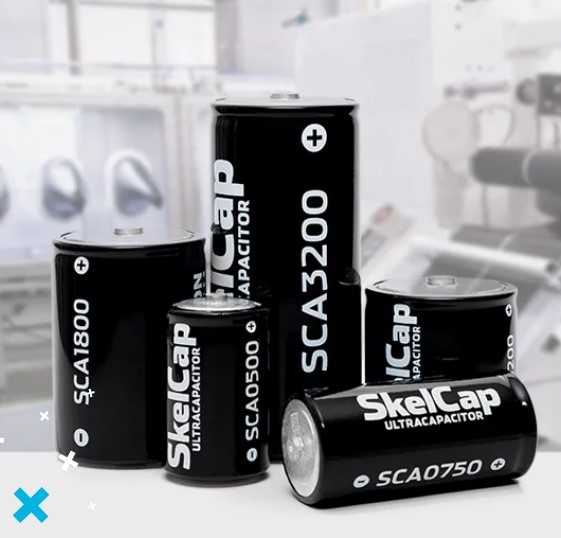 Supercapacitors vs. Battery and Conventional Capacitors

Irrespective of all its excellent properties, supercapacitor has also some draw backs such as, low energy density, not all the energy can be utilized during discharge, individual cell shows low voltage, high self-discharge as compared to battery [10]. Several research is going all over the world to overcome those limitations.

Supercapacitors have numerous advantages in several applications where a huge amount of power is desired for relatively short time. Also, it is useful where a very high number of charge-discharge cycles or a longer lifetime is required. Supercapacitors are largely used in consumer electronics products such as stabilizer in power supply, LED flashes, portable speaker, etc. In grid power buffer, low-power buffer, UPS, energy harvesting system, back-up power for actuators in wind turbine, medical equipment, modern age transportation (Electric car/bus/train, aviation, automotive vehicles, etc.), and ultra-battery or hybrid battery supercapacitors are used. Supercapacitor is not total replacement of battery but combination of supercapacitor with battery gives an excellent hybrid system for energy storage. This hybrid system used in electric vehicle which is long lasting, more powerful and less expensive than many other technologies. The rechargeable energy system and electric vehicles uses supercapacitors as its main storage system. Flexible supercapacitors are used in modern wearable devices. It is expected that the use of supercapacitor will increase in rapid pace with advancement of technology in near future.

Supercapacitor have a great potential to be leading green and efficient energy storage device for future application in many industries and fields. This will also bring enormous opportunities for the development of different types of supercapacitors. Still, there are several problems related to energy density, cost, efficient electrode materials, etc. More and more focus should be given in future research. The utmost future of supercapacitors which will be very realistic is the blend of a double-layer charging interface with prevailing energy-storage systems [10]. We can expect standalone supercapacitor batteries in near future.

Dr. Laxman Singh and Dr. Ayan are thankful for their respective Institutions for providing the peaceful academic environment to compile the collective studies.