Welcome to Universal Journal of Chemistry and Applications

Copyright: This is an open-access article distributed under the terms of the Creative Commons Attribution License, which permits unrestricted use, distribution, and reproduction in any medium, provided the original author and source are credited. Copyright © 2022; Hameda TA

Paracetamol is accessible as a nonspecific medicine, with brand names counting Tylenol and Panadol among others. In 2019, it was the 145th most commonly prescribed medication in the world, with more than 4 million prescriptions. Therefore, the present study has been carried out to investigate the paracetamol toxicity on lipid peroxidation andd antioxidant enzymes in male New Zealand white rabbits. Animals were assigned to one of two treatment groups: 0 mg paracetamol kg BW [control]; 500 mg paracetamol/kg BW. Rabbits were orally managed the particular dosages each other day for 12 weeks. Results obtained showed that paracetamol significantly [P < 0.05] induced thiobarbituric acid-reactive substances [TBARS; the marker of lipid peroxidation] in plasma, while the activities of glutathione S-transferase [GST], superoxide dismutase [SOD] and catalase [CAT], and the level of sulfhydryl groups [SH-group] were decreased [P < 0.05] in blood plasma.

Paracetamol, moreover known as acetaminophen is figure 1 a medicine utilized to treat fever and gentle to direct torment [1]. At a standard measurement, paracetamol as it were somewhat diminishing body temperature, [2]. it is second rate to ibuprofen in that regard, [3] and the benefits of its utilize for fever are vague [4]. Paracetamol may calm torment in intense mellow headache but as it were somewhat in verbose pressure migraine [5]. Be that as it may, the aspirin/paracetamol/caffeine combination makes a difference with both conditions where the torment is mellow and is suggested as a first-line treatment for them [6]. Paracetamol is viable for post-surgical torment, but it is second rate to ibuprofen [7]. The paracetamol/ibuprofen combination gives encourage increment in power and is prevalent to either sedate alone [7]. The torment help paracetamol gives in osteoarthritis is little and clinically inconsequential [8]. The prove in its favor for the utilize in moo back torment, cancer torment and neuropathic torment is deficiently [9]. Within the brief term, common side impacts of paracetamol are sickness and stomach torment, and it appears to have tolerability comparable to ibuprofen [10]. Incessant utilization of paracetamol may result in a drop in hemoglobin level, demonstrating conceivable gastrointestinal dying [11], and anomalous liver function tests [12]. There's a steady affiliation of expanded mortality as well as cardiovascular [stroke, myocardial localized necrosis], gastrointestinal [ulcers, dying] and renal unfavorable impacts with taking higher measurements of paracetamol [13]. The sedate may too increment the hazard of creating hypertension [14]. Hoisted recurrence of asthma and developmental and regenerative disarranges is watched within the descendant of ladies with drawn out utilize of paracetamol amid pregnancy, in spite of the fact that whether paracetamol is the genuine cause of this increment is hazy [15]. A few considers propose that there's prove for the affiliation between paracetamol amid pregnancy and extreme introvertedness range clutter and consideration shortage hyperactivity clutter, whereas making clear advance research is required to set up any causal connect [16], which has provoked a few calls to restrain its utilize in pregnancy to the most reduced viable measurement for the most limited conceivable time [17]. 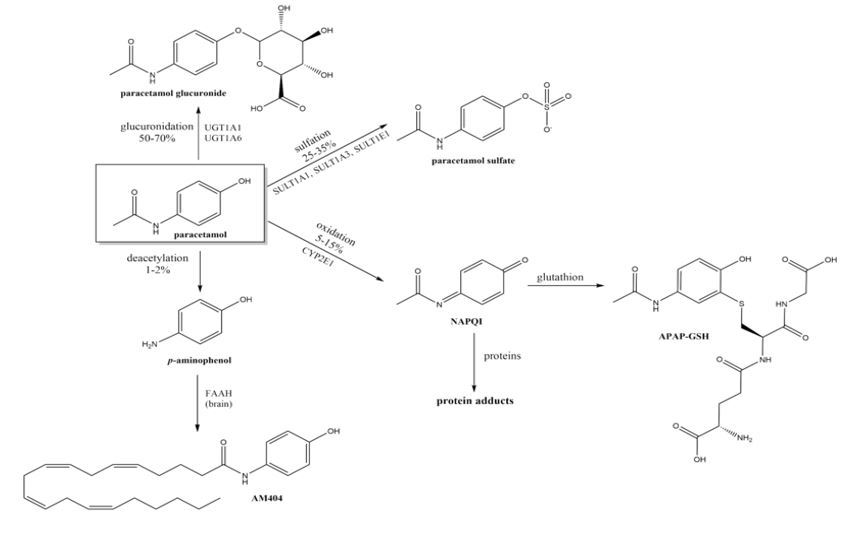 Develop male Unused Zealand White rabbits [age of 7 months and beginning weight of (2.917 ?28.9 Kg) were utilized. Animals were independently housed in cages and weighed week after week all through 3-months exploratory period. Twenty develop male rabbits were arbitrarily separated into two break even with bunches [each five rabbits]. The primary bunch was utilized as control. The moment gather was utilized to think about the impact of paracetamol (500 mg/kg body weight) [18]. Blood tests were collected from the ear vein of all creatures each other week all through the 12-week exploratory period. Blood tests were set promptly on ice. Heparin was utilized as an anticoagulant. Plasma was gotten by centrifugation of tests at 860×g for 20 min, and was put away at -40?C. At the conclusion of exploratory period, put away plasma tests were specifically utilized for investigations. Plasma thiobarbituric acid-reactive substances [TBARS] were measured at 532 nm by utilizing 2-thiobarbituric corrosive (2,6-dihydroxypyrimidine-2-thiol; TBA An termination coefficient of 156,000 M−1 cm−1) was utilized for calculation [19]. Plasma glutathione S-transferas (GST; EC 2.5.1.18) activity was determined according [20], using para-nitrobenzylchloride as a substrate. Superoxide dismutase (SOD; EC 1.15.1.1) activity was measured in plasma according to [21]. Catalase [CAT; EC 1.11.1.6] activity was determined using the Luck method involving the decomposition of hydrogen peroxide [22]. Sulfhydryl groups were measured in plasma after reaction with 5,50-dithiobis-(2-nitrobenzoic acid) using the method of [23] Statistical analysis. Data were analyzed as a completely randomized design13 using the general linear model procedure of14. Means were statistically compared using least significant difference [LSD] test at 0.05 significant level13. The following model was used: Y ijk ¼ l ai bj abij eijk where Yijk = experimental observation; l=overall mean; ai=treatment effect; bj=week effect; abij=interaction effect of treatment and week; eijk=random error.

Treatment with paracetamol caused significant (P < 0.05) increase in the overall means of plasma thiobarbituricacid-reactive substances (TBARS) concentrations and decrease in glutathione S-transferase (GST), superoxide dismutase (SOD) and catalase (CAT) activities, and the levels of SH-group compared to control animals (Table1 and figure 3 to 7). 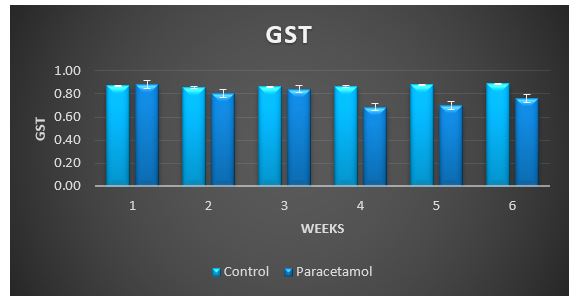 Figure 3: Change in GST during treatment of male rabbits with paracetamol. 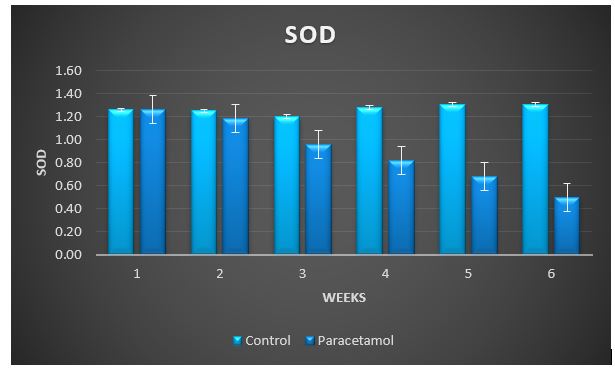 Figure 4: Change in SOD during treatment of male rabbits with paracetamol. 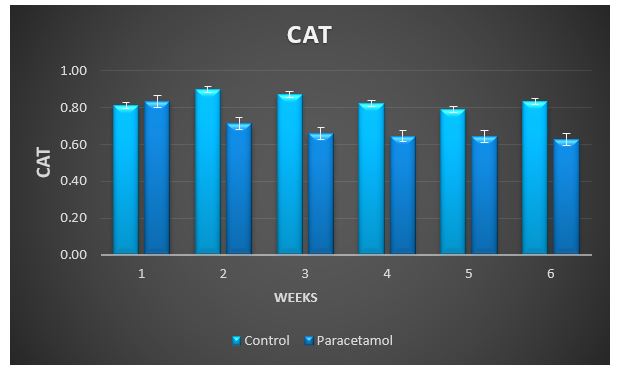 Figure 5: Change in CAT during treatment of male rabbits with paracetamol. 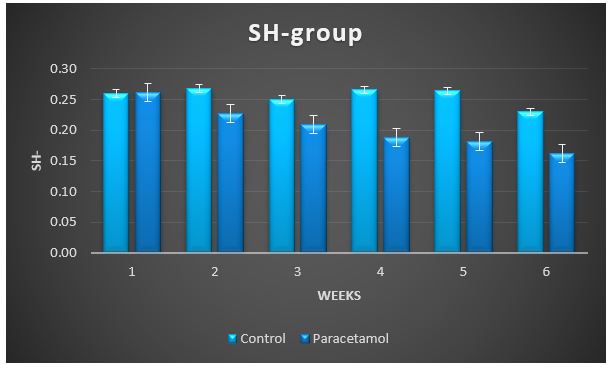 Figure 6: Change in SH-group during treatment of male rabbits with paracetamol. 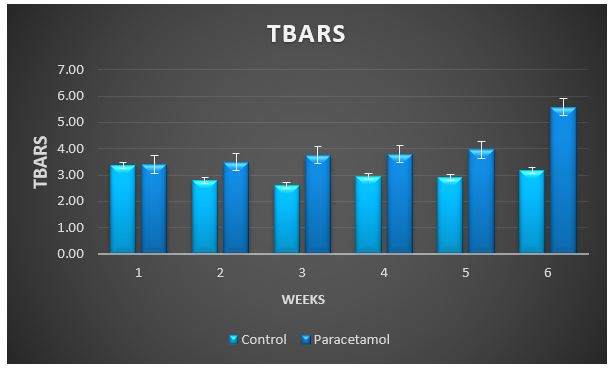 Figure 7: Change in TBARS during treatment of male rabbits with paracetamol.

In the present study, paracetamol produced a significant increase in MDA level with a small reduction in GSH. This pattern of change in MDA and GSH in plasma may indicate PCM induced lipid peroxidation and compromised antioxidant defense mechanism [24]. Damage triggered by oxidative stress can be controlled by exogenous antioxidants and endogenous antioxidants defense system of the host, the endogenous defense consists of enzymatic and non-enzymatic antioxidants, like as superoxide dismutase SOD, catalases CAT and glutathione GSH [25]. GSH is powerful nucleophilic, 3-peptide [L-γ-glutamyl cysteinyl glycine], antioxidant, important for cellular defense, that detoxifies, reactive oxygen species via binding with and eliminating of toxic molecules, thus handling the inflammatory cytokine chain reactions [26]. Reduced levels of GSH in various tissue makes the defense system weak, against reactive oxygen species, and may lead to per-oxidative damage. In present study, it is concluded that, paracetamol administration reduced the GSH levels in plasma by the process of lipid peroxidation, may have resulted free radical’s generation. High level of ROS destroys cellular lipids, proteins and nucleic acids. To avoid this situation antioxidant defenses have developed to eradicate most of these oxidant mediators. Imbalance between oxidative impairment and defensive mechanisms caused oxidative stress [27]. The elevated level of MDA is in accordance with previous study of [28,29], which showed the association between PCM toxicity and MDA. A significant elevation in MDA level weakling glutathione reductase [GR] activity, SOD and TAC was demonstrated in other studies.

Although paracetamol has a reasonable safety profile in therapeutic doses, its overdose remains the most important cause of decrease of antioxidant enzymes and increase of TBARS in plasma.