Long Term Survival of a Patient with Brain Metastases from Lung Cancer: A Case Report

Copyright: This is an open-access article distributed under the terms of the Creative Commons Attribution License, which permits unrestricted use, distribution, and reproduction in any medium, provided the original author and source are credited. Copyright © 2020; Tahseen Alrubai

Introduction: Brain metastasis (BM) commonly occurs in patients with advanced lung cancer and is associated with poor prognosis and short survival periods. In some cases, select patients survive several years which is rare.

Presentation of case: This case report highlights the long-term survival of a 55-year-old patient who was diagnosed with brain metastases from lung cancer three years ago and is currently alive following treatment with chemotherapy for the primary cancer and whole-brain radiation therapy and chemotherapy for the brain metastases. Since the diagnosis of brain metastases three years ago, the patient’s primary cancer has remained controlled and she is living a disease-free, functional life.

Discussion: Literature review identified female gender, performance status, number of metastatic sites, the presence of a solitary lesion or single lesion, brain metastases later in their illness, adenocarcinoma histology, younger age, and patients with EGFR and ALK alterations, to be all as favorable prognostic factors associated with long term survival in patients with brain metastasis secondary to lung cancer.

Conclusion: Further studies should be designed to investigate the factors that may relate to long term survival in patients with brain metastasis secondary to lung cancer. This should help further understand the treatment outcomes in these patients.

Lung cancer is the most common type of cancer worldwide accounting for nearly 11.6% of the world’s cancer burden [1,2]. According to many reports, around 40-50% of lung cancer patients develop brain metastases (BM) [3,4]. The incidence increases in the more advanced disease stages, as well as with small-cell lung carcinoma (SCLC) and adenocarcinoma. In spite of the many advances in surgical treatment, radiation oncology, and systemic treatments, the prognosis of lung cancer patients with BM is poor with a median survival between 3-6 months [5-7]. In some patients, survival may be increased to 7-13 months when surgery or stereotactic radiotherapy is used along with whole-brain radiotherapy (WBRT) [8]. Brain metastasis secondary to lung cancer is mainly treated with local brain radiotherapy and WBRT [9-11]. Yet, more than 35% of patients experience short-term or long-term adverse reactions to WBRT, like fatigue, hemiplegia, hearing loss, headaches, and neurological diseases [12]. In those with neurologically asymptomatic BM, systemic treatment is the preferred option [11,13]. However, treatment with chemotherapy drugs is restricted due to the limited ability of the drugs to cross the blood-brain barrier, with response rates of 15-30%, neurological adverse events, and no improvement of median survival [9]. For patients with poor prognosis, supportive care like steroids is often recommended [11]. Even though the treatment of patients with brain metastases has improved and longer periods of overall survival have been reported, finding that a patient survives several years remains rare [14]. For this reason, we present a case of a 55-year-old female patient who was diagnosed with brain metastases secondary to lung cancer and is currently disease-free and alive since three years ago.

We are reporting a case of a 55-year-old female who presented at our clinics on 5-8-2010 with a painless breast mass. Her medical history was reported as hypertensive on treatment, non-diabetic, non-smoker, Gravida 4 Para 3 A1, first pregnancy at 26, menopause at 52, menarche at 12, history of oral contraceptives usage, no family history of cancer. Upon referral, her last medical report stated that she was diagnosed with ductal carcinoma of the breast. Left breast mastectomy with axillary clearance specimen plus right breast mass were sent to the histopathology lab for a slide review. Sections from the left breast mass showed features consistent with fibrocystic disease with no malignant changes seen. All 7 axillary lymph nodes were free of malignant cells. Sections from the right breast mass showed features of the fibrocystic disease as well with no malignant changes. The patient was left for follow-up and observation.

On 26-10-2015 the patient showed up with dyspnea. A chest Computed Tomography (CT) scan was suggestive of peripheral lung carcinoma. Left lower lobectomy resected biopsy specimen confirmed that the histology of the tumor was that of malignant invasive moderately differentiated lung adenocarcinoma. The pathological stage of the tumor was (T2a, Nx, Mx), Stage 1B. A Positron Emission Tomography / Computed Tomography (PET/CT) whole body with FDG imaging findings revealed hypermetabolic left hilar lymph nodes, left small pleural effusion, and no evidence of other hypermetabolic lesions in the remainder of the body. Cytogenetics test for ALK rearrangement was unsuccessful technically, as for the EGFR mutation test, it was found to be non-mutant. The patient was put on 6 cycles of Alimta (900 mg total dose per cycle) and Carboplatin (540 mg total dose per cycle). Follow-up PET/CT whole body with FDG imaging revealed that the FDG-avid left hilar lymph nodes have significantly decreased in size, the left pleural effusion has resolved, and there was no suspicious lung nodule. The overall report revealed that the patient was responsive to the treatment and that there was no distant metastatic disease reported. She continued on Alimta (900 mg total dose per cycle).

On 28-1-2017, the patient presented to the Emergency Room complaining of a headache and slightly blurred vision. Magnetic Resonance Imaging (MRI) of the Brain revealed subcortical intra-axial lesion seen at right occipital region depicted hypointense signals on T1 with hyperintense area compatible with hemorrhage, hyperintense on T2 and FLAIR with enhancement after I.V. contrast. It was surrounded by vasogenic edema causing mass effect and midline shift to the left side. The picture was consistent with hemorrhagic brain metastasis (Figure 1). 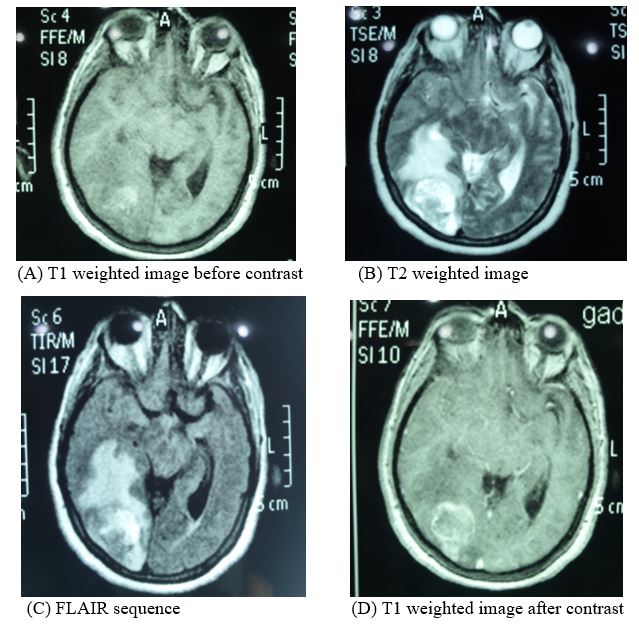 The patient was put on dexamethasone 8 mg twice daily. A week later she was put on Palliative WBRT treatment with 20 Gy in 5 fractions given over 5 days. Whole-brain radiotherapy had no adverse events, she was doing very well. She was switched to Gemzar 1700 mg (day 1, day 8) and carboplatin 500mg (day 1). Follow-up abdomen CT scans and chest CT scans were clear with the disappearance of the left hilar mass and no pulmonary, hepatic or osseous metastasis. The patient was left on strict regular follow-up visits, scheduled check-ups, physical exams, and evaluation every two months.

The latest follow-up PET/CT imaging performed on 8-7-2019 revealed an overall pattern of a disease-free picture (Figure 2). Regarding the latest brain MRI which was done on 19-1-2020, It revealed ill-defined peripheral area seen at the right occipital region of hypointense signals on T1, hyperintense on T2 and FLAIR with no enhancement post-I.V. contrast, a picture consistent with gliosis (Figure 3). 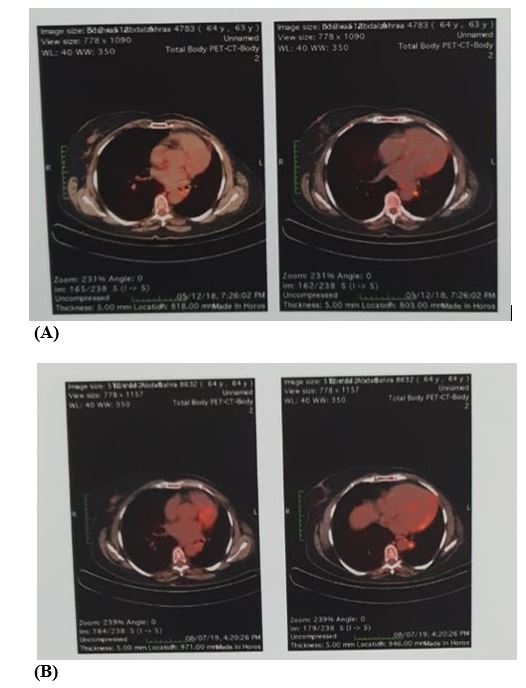 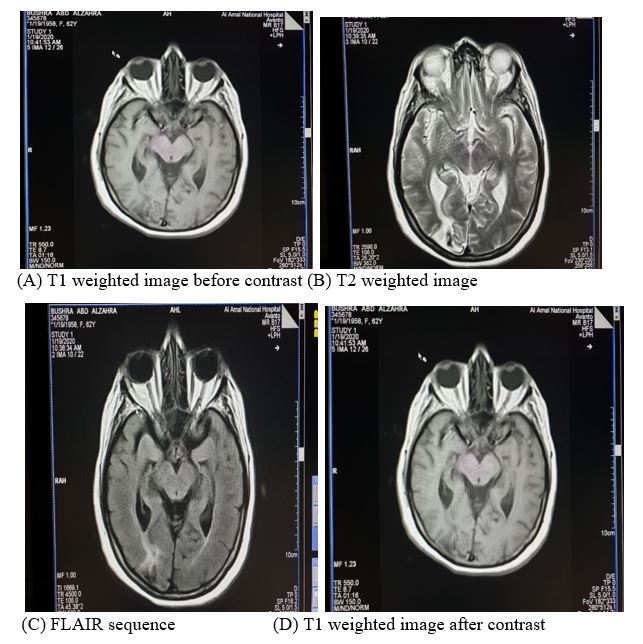 What is interesting about this case is the long disease-free interval (brain and body) for three whole years from January 2017 till the end of 2019 after brain metastasis secondary to lung cancer. In January 2020, the patient is still alive with no evidence of the disease and an overall survival of three years.

Brain metastasis frequently develops in patients with lung cancer. The prognosis of these patients is poor. Nevertheless, cases with long-term survival have been reported, one of which is the patient we are reporting in this case report. Here, a question arises about the factors that may relate to the long-term survival of these patients, whether they are patient-specific, cancer-specific, or therapy-specific factors [15,16]. Van Damme, V et al., compared baseline clinical factors (sex, age, smoking status, weight loss, performance status, co-morbidity, histological subtype, place and number of metastasis) with treatment-related factors in long-term survivors and short-term survivors. They reported a significant association between long term survival and gender, performance status and the number of metastatic sites [17]. In a study carried out by Kotecha, R et al. they reported that better overall survival was associated with the presence of a single lesion at the time of brain metastasis diagnosis. On the other hand, gender (males), multiple brain metastases, no surgery, and no stereotactic radiosurgery were all associated with worse overall survival [18]. Furthermore, in a retrospective cohort, Ali. A et al. reported that patients who developed brain metastases later in their illness had longer overall survival than those who had brain metastases at diagnosis [19]. Niemiec, M et al. identified female sex and adenocarcinoma histology as positive prognostic factors related to long-term survival in BM from lung cancer [8]. Similarly, Greenspoon JN et al. reported that younger age, female sex, and good performance status appeared to demonstrate an improvement in overall survival [20]. Regarding the effect of gene alterations, a multi-institutional retrospective database study showed that survival have markedly improved in patients with EGFR and ALK alterations versus those without these alterations [21].

As mentioned above, the literature identified female gender, performance status, number of metastatic sites, the presence of a single lesion, brain metastases later in the cancer stage, adenocarcinoma histology, younger age, and patients with EGFR and ALK alterations, to be all as favorable prognostic factors associated with long term survival in patients with brain metastasis secondary to lung cancer. The patient presented in this report had such a good response to her treatment in spite of being above 50 years old, EGFR and ALK-negative, having a low-performance score due to the several chemotherapy cycles taken, and refusing brain surgery when diagnosed with brain metastasis, which are all adverse prognostic factors proven to worsen the overall survival. She is still surviving and disease-free, since her last treatment session three years ago. This can only be explained as being a rare case that was important to be reported.

In conclusion, survival in patients with BM from lung cancer is poor. Very few selected patients may survive in the long-term. Additional unidentified factors, probably indicative of biological differences impact survival in these patients. A thorough understanding of these variables is important to estimate the survival prognosis, select the optimal therapy for the patient, and also to guide the treatment decisions. Therefore, further studies should be designed to investigate these factors that should help further improve our understanding of the heterogeneous outcomes in these patients.

Written consent for publication of the clinical details and/or clinical images was obtained from the patient. A duplicate of the consent form is available for review by the Editor of this journal.