Candidemia to Candida pararugosa in a child: first case reported in Morocco

Copyright: This is an open-access article distributed under the terms of the Creative Commons Attribution License, which permits unrestricted use, distribution, and reproduction in any medium, provided the original author and source are credited. Copyright © 2021; Hami Aziza

The genus Candida play an important role in human pathology, which leads scientists to study their virulence and pathogenicity [1]. Some studies have reported that 40% to 50% of infections are caused by Candida species other than Candida albicans. [2-4] Candida pararugosa (C. pararugosa) is a yeast isolated for the first time from human feces. Nakase et al [5] described it in the medical literature in 1999. It was thought that this yeast could be a colonizer of the gastrointestinal tract and oral cavity [6,7] despite the fact that this was isolated from different human anatomical specimens [8], there have been no cases in the literature that have linked its isolation to clinical symptomatology [9]. In Morocco, to our knowledge, no cases of Candida pararugosa candidemia have been reported. In the present observation, we describe the first case of isolation of C. pararugosa from the blood culture of a child with Burkitt lymphoma.

This is a 13 year old child admitted to the emergency room for fever and bone pain (J1). He has no significant pathological history. On clinical examination, the child was conscious, asthenic and pale. Hepatosplenomegaly and axillary, inguinal and retro auricular adenopathies were found. Gingival bleeding was found on examination of the oral cavity. A biological assessment was performed and showed bicytopenia (anemia at 4.5 g/dL and thrombocytopenia at 6000 platelets/mm3 (150-500 x 109 /L)) with lymphocytosis at 17470 lymphocytes/mm3. The blood smear showed 60% blast cells. The myelogram showed Burkitt's lymphoma. An osteo-medullary biopsy and immunophenotyping were performed and the diagnosis of Burkitt lymphoma was retained. Chemotherapy was started at D4. At D14, our proposal was transfused with platelet concentrates due to deep thrombocytopenia with meningeal and alveolar hemorrhage. At D15, he developed a fever of 38.5°C, requiring antibiotic therapy with: Ceftazidime, amikacin, vancomycin and fluconazole with systematic deworming with Metronidazole after 7 days of fever (D22), followed by a combination of Vancomycin, Imipenem and Voriconazole. Because of the persistence of the fever, blood cultures were requested (three vials and at D 24 and D 28 and D 29). They were performed in aerobic vials and incubated in the Becton Dickinson Bactec® FX 400 automated system. After 5 days of incubation (D29, D32 and D33), the blood culture was positive (three positive vials out of three samples). 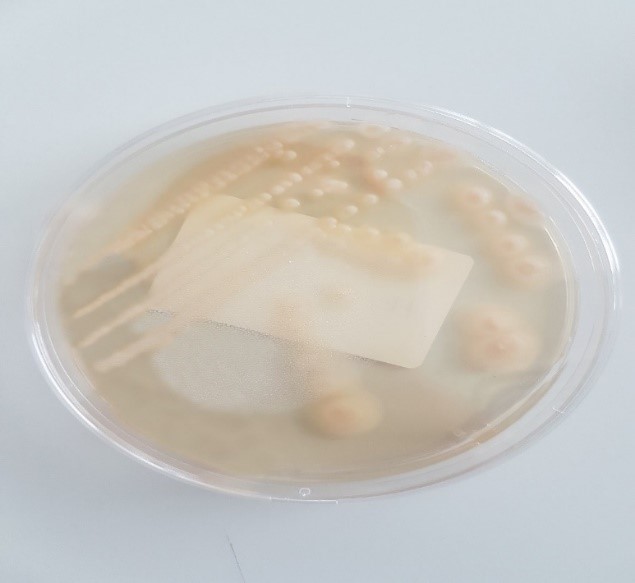 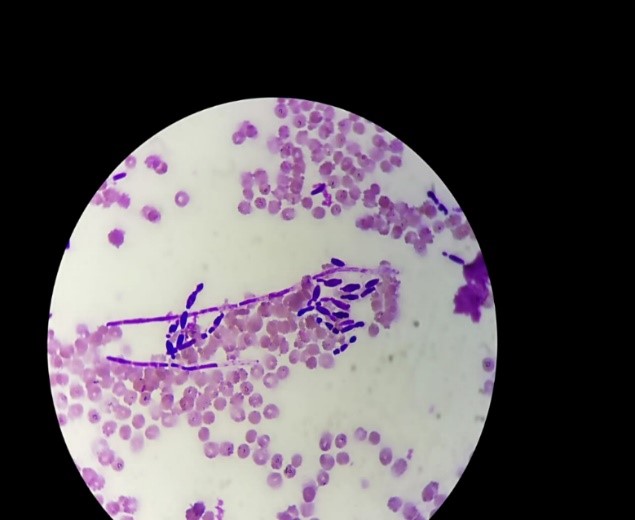 The identification by biochemical galleries BD PhoenixTM Yeast ID on the BD PhoenixTM 100 automaton revealed the presence of Candida pararugosa with a 99% confidence value. The antifungogram was not performed because it was unavailable. The patient died at D29 of his hospitalization, but the cause of death was not clear, was it candidemia or alteration of the general state secondary to his hematological pathology.

Candidemia is the fourth leading cause of sepsis [10,11] with an increasing number of non albicans Candida. The species non albicans Candida was responsible for 54.4% of the candidemia cases [12,13]. Other than Candida albicans, Candida parapsilosis, Candida glabrata, Candida tropicalis, and Candida krusei, rare species have a high mortality rate (57.1%) [14]. These infections are more common in immunocompromised patients, particularly in oncohematology patients [15].

C. pararugosa is a very rare yeast [7]. It was first isolated from human excreta, and after that it was found in the oral cavity of a denture wearer [6] and in the saliva of a patient sarcoma, indicating that it plays a role in the oral microbiota [7]. There is a dearth of knowledge about C. pararugosa natural environment and pathogen role [6]. C. pararugosa has been isolated from a variety of food and environmental sources [16,17] and has been identified as a potential probiotic because of its ability to resist the toxic effects of bile and gastric secretion [18]. C. pararugosa has been isolated from human bronchial washings, blood, urine, and vaginal fluids, according to molecular studies [8-19]. C. pararugosa has also been associated with onychomycosis as a possible pathogen [9]. The analysis of 26 S of activated RNA C. pararugosa to be correctly classified and distinguished from the complex C. rugosa species [20]. Candidemia is defined as an infection proven by the presence of one or more Candida positive blood cultures [21,22]. In our case, this yeast was isolated three times from the blood cultures of a Burkitt lymphoma patient who had been treated with cancer chemotherapy, antibiotics and antiparasitic drugs. Although the exact pathogenicity of this yeast in human pathology is unknown, the isolation of Candida yeast in blood cultures has been linked to a high risk of invasive disease and mortality [9]. This yeast is rare, and it is possible that this is due to the fact that it is under-diagnosed due to the use of methods limited to a simple filamentation test, as in our case , it could have been confused with other Candida species.

The extraction of budding yeasts, with or without filaments, from samples taken from sterile sites can be used to diagnose pathogenic fungi [23-24]. Candida pararugosa blastospores are characterized as oval to long oval elements that occur individually, in pairs, or in short chains to form a pseudohyphae [25]. In our case, the yeasts appear in oval form, 4 µm to 8 µm in diameter, budding, visible on Gram stained smears with the presence of pseudohyphae. The positivity of a sample taken from a normally sterile site is sufficient to diagnose invasive candidiasis. Routinely, repeated blood cultures appear to be the contributory specimen [26]. In the case of our patient, the blood culture was pure and mono-microbial and according to the REMIC criteria for blood cultures, the clinical significance of a microorganism isolated by blood culture is all the more likely that it will be found in successive samples [27]. Yeast was isolated from three blood cultures, two of which were performed 24 hours apart. The patient presented several risk factors for fungemia: immunosuppression, use of broad-spectrum antibiotics, central venous catheters, in particular for the administration of hyper-feeding solutions. The blood contamination could have as an entry point the digestive tract or a vascular catheter [26]. Candida infection is most often linked to endogenous contamination. Indeed, Candida spp are saprophytes of the digestive tract. Under the effect of promoting factors and ecological modifications, they can proliferate in the digestive tract, leading to a colonization phase. The next stage is invasion by translocation during mucosal alteration, with the possibility of distant dissemination (invasive candidiasis, then disseminated candidiasis) [22]. Exogenous contamination occurs more rarely and is caused either by manuporting or by contamination of medical devices (catheters, solutions, etc.) [26]. the patient was transfused several times and received intravenous antibiotic and cancer chemotherapy.

Virulence factors such as adhesion to epithelial and blood cells, where applicable, or yeast are found in direct contact with various blood cells, including red blood cells (Figure 1), biofilm formation, hemolytic activity and production of extracellular hydrolytic enzymes (coagulase, phospholipase and proteinase) [28] facilitate adhesion, infiltration and spread in host tissues, even at elevated temperatures. These factors will promote pathogen resistance to host immunity, such as phagocyte escape and complement mediation. Virulence factors may also include dietary, metabolic, and necrotic factors, as well as morphological variations such as phenotypic change and biofilm formation [29].

However, with the use of specialized fungal media (BD BactecTM Mycosis IC / F Medium) [30], the detection time of candidemia for some strains of Candida can be shortened, which would have prevented the death of the patient. The search for risk factors and the use of predictive scores or indices such as the colonization index can help in the diagnosis of yeast infection. In our patient, a probabilistic antifungal treatment was started with fluconazole and then voriconazole as he was a patient at risk. Several authors have reported that Candida pararugosa has MICs generally elevated on fluconazole [1,8,9] hence the interest of the antifungal chart which is necessary to guide therapy. T confirms the sensitivity of the yeast to the administered antifungal agent and allows the possibility of therapeutic de-escalation, by replacing the initial molecule with one that is as active but less costly or better tolerated [31]. Early initiation of an antifungal treatment is a major prognostic factor for candidemia [32-33].

Candida pararugosa is a rare fungal species. Considered as a commensal yeast of the digestive tract and other tissues, it can become opportunistic in the immunocompromised, especially in oncohematology. Through this observation, we report the first case of C. pararugosa candidemia in Morocco.