Total section of the lower humeral artery and median nerve in a girl during a suicide attempt: A case report

Copyright: This is an open-access article distributed under the terms of the Creative Commons Attribution License, which permits unrestricted use, distribution, and reproduction in any medium, provided the original author and source are credited. Copyright © 2022; Redha Lakehal

Ballistic trauma is as much a pathology in wartime as it is in peacetime [1]. The pathophysiology of ballistic trauma is based on the behavior of the projectile in the body. High-velocity firearm wounds are the preserve of the military. Low-velocity firearm wounds are more often encountered in civilian settings. If hemorrhage is the first cause of early death, infection is the second from the twenty-fourth hour. The management of a patient with ballistic trauma is an infrequent reason for referral in emergency medicine and more particularly in extra hospital settings [1]. Secondary complications, particularly septic, and the severity of associated lesions such as bleeding processes require evaluation and prioritization involving teams from mobile emergency and resuscitation structures. The aim of this work is to report a case of total section of the lower humeral artery and the median nerve with loss of substance in a young girl during a suicide attempt.

We report the observation of a 16-year-old girl with psychiatric disorders since childhood under antidepressant treatment who suffered a ballistic trauma to the left upper limb during a suicide attempt. Physical examination of the left upper limb showed the absence of active bleeding with abolition of the radial pulse, coldness and pallor of the left hand and forearm associated with a sensorimotor deficit of the latter two, the rest of the physical examination was unremarkable with blood pressure at 80/50 mm HG. Chest X-ray showed a CTI of 0.50. Bone X-ray of the left upper limb was unremarkable. Electrocardiogram showed a regular sinus rhythm. After an emergency assessment, the patient was operated on under general anesthesia and endotracheal intubation. The intraoperative exploration revealed in addition to the entry and exit portals at the level of the arm, a total section of the low humeral artery with loss of arterial substance as well as total section of the median nerve and retraction of the proximal end without muscular section of the left arm and without finding a projectile during the trimming. The gesture consisted after trimming and washing of a restoration of the humeral arterial continuity by the inverted saphenous vein implanted lateroterminally between the two arterial ends (Figures 1,2) with identification of the two nerve ends so as to facilitate their identification during a future operation. 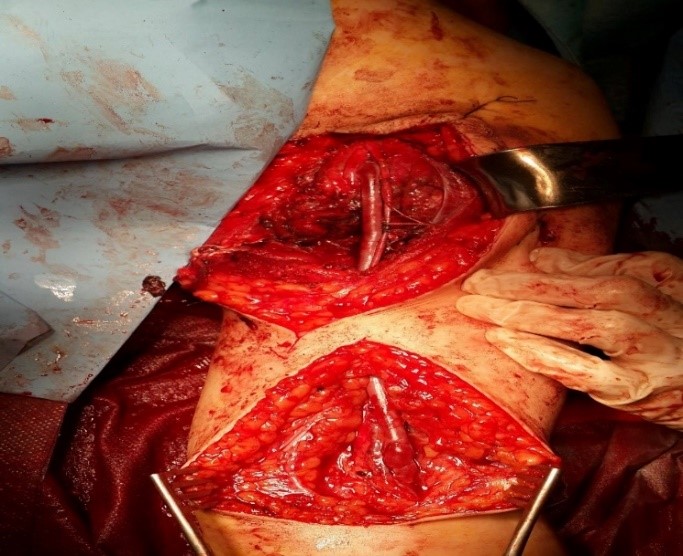 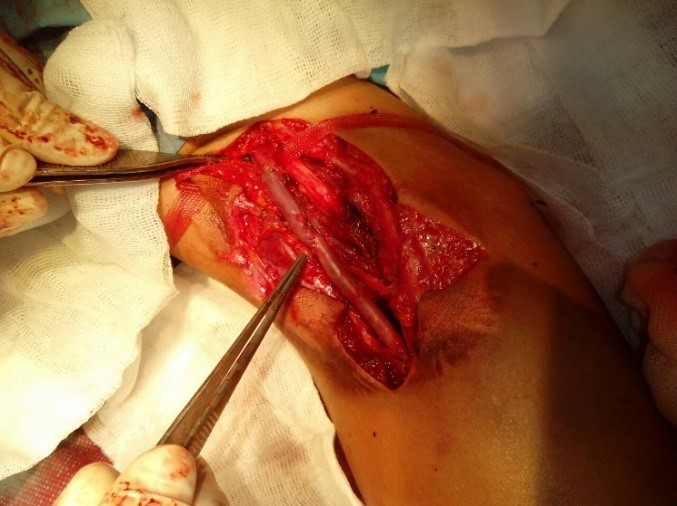 The length of stay in the intensive care unit was 24 hours. The postoperative follow-up was favorable in terms of revascularization of the upper limb with persistent paralysis of the left hand and forearm. CT angiography of the traumatized limb showed a permeable assembly without anastomotic stenosis (Figure 3). The patient was sent to her attending psychiatrist for psychiatric care and to centers specializing in neurological surgery. 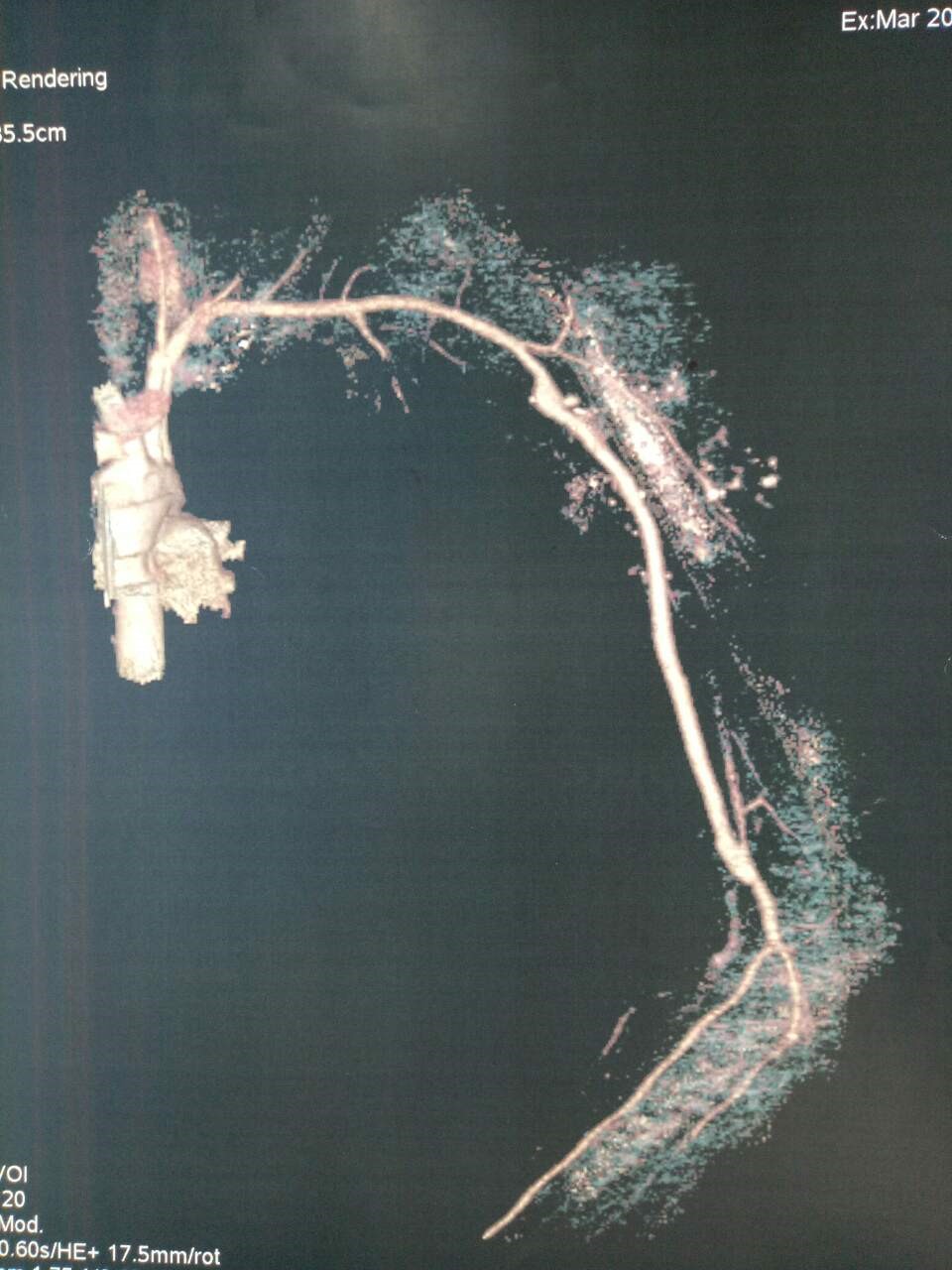 According to Laforge [2], in civilian practice, 48% of ballistic injuries are due to assaults, 47% to suicides and 3% to accidents. In our patient, the circumstances of the accident were suicide. Among 39 patients treated by Dakoure [3] for ballistic trauma, 58.9% had been accidentally injured. Ballistic trauma is a real public health problem in many countries, especially developing ones [3]. In 2011, in Burkina Faso, a study conducted by Mzida and all on firearm injuries found that the upper limbs were affected in 18.5% and the lower limbs in 51.8% [5]. The absence of foreign bodies in the wound testifies that it was a bullet and not a shrapnel and the limitation of lesions of the soft parts showed that the bullet had a high energy at its point of exit which spread the soft parts [6-8]. The loss of humeral arterial substance was filled with a vascular substitute: inverted saphenous vein taken from the ipsilateral thigh after verification of the arterial axes by Fogarty probe and implanted laterally. The absence of gesture on the median nerve was due to the importance of the neurological damage with loss of substance of 10 cm and retraction of the proximal end of the median nerve. The intraoperative follow-up was favorable in terms of revascularization of the left upper limb with persistent paralysis of the left hand and forearm. The immediate and medium-term postoperative follow-ups were favorable on the vital and vascular levels but unfavorable on the neurological level. Control CT angiography of the traumatized limb showed a permeable assembly without anastomotic stenosis [9]. The severity of the associated lesions requires evaluation and prioritization by the mobile emergency and resuscitation teams at the place of occurrence of the ballistic trauma, which was not the case for our patient. The evacuation was carried out without evaluation or prioritization from a peripheral hospital to a cardiovascular surgery center via three non-specialized hospital structures during the journey. The journey time was over 15 hours. The patient requires psychiatric care to prevent further suicide attempts.

Childhood ballistic trauma is a rare reason for consultation in surgery. However, we must not miss certain pitfalls and ignore significant internal lesions contrasting with a low-traumatic entry point. This is why it is recommended to systematically perform imaging in search of bone, vascular and tissue lesions in a patient outside of any vital emergency context. Knowing certain parameters such as the circumstances of the accident and the type of firearm used can help predict the severity of injuries. Ballistic traumas are surgical emergencies that must be taken care of as soon as possible to avoid progression to complications.