Copyright: This is an open-access article distributed under the terms of the Creative Commons Attribution License, which permits unrestricted use, distribution, and reproduction in any medium, provided the original author and source are credited. Copyright © 2020; Omar Y

A 46-year-old male presented to our emergency with sudden severe shortness of breath and was found to have massive pericardial effusion causing cardiac tamponade and atrial fibrillation. He had to undergo immediate pericardiocentesis to relieve his symptoms and it drained frank pus indicating pericardial empyema as the underline cause of tamponade. On physical examination, patient was found to have a left submandibular tender swelling. He had increased inflammatory markers and on further imaging the CT showed massive diffuse mediastinal abscess. The patient had to undergo urgent surgery by multiple specialist surgeons in which large amount of pus was drained from the submandibular and mediastinum resulting in improvement of his condition and speeded his recovery.

• Thorough history and examination are of utmost importance.

• High index of suspicion of descending mediastinitis should arise whenever purulent pericardial drainage is encountered.

Cardiac empyema, pus collection in the pericardium, can rarely present as cardiac tamponade which in certain cases considered life threating and must be treated immediately. It is rarely reported for untreated odontogenic infections and abscess or oropharyngeal infection and abscess to cause mediastinitis and cardiac empyema [1,2]. In this article we report a patient that presented with large pericardial effusion causing cardiac tamponade and was found to have cardiac empyema which originated from a submandibular abscess that lead to mediastinitis and then invading the pericardium. By highlighting this case presentation, we attempt to emphasize on the importance of taking all signs and symptoms seriously and to illustrate the connection of the heart to neck infections.

A 46- year-old male known diabetic, not complaint with medications, was referred to our emergency from the airport clinic with the chief complain of sudden onset of shortness of breath. The patient stopped for transit. While waiting for his flight he looked sick hence escorted by airport staff to the clinic. The patient felt short of breath but denied any recent cough, fever, chest pain or palpitations. In review of symptoms patient complained of neck swelling and pain that started since few days ago; for that he took a short course of antibiotics. On physical examination; his vitals were blood pressure of 126/86 mmHg, pulse rate of 140 beats per minute, respiratory rate was 26 breaths per minute and temperature was 36.0 C. The patient had a left submandibular tender swelling. On chest examination there was bilateral scattered crackles and diffuse wheezing. Muffled heart sounds with normal first and second sound were heard on cardiovascular examination with no audible rub. The electrocardiogram (ECG) showed atrial fibrillation [Figure 1] and chest X-ray reported bilateral reticular infiltrates, hazy opacities and prominent bilateral hilar shadowing and cardiothoracic ratio is increased with blunted right costo-phrenic angle [Figure 2]. 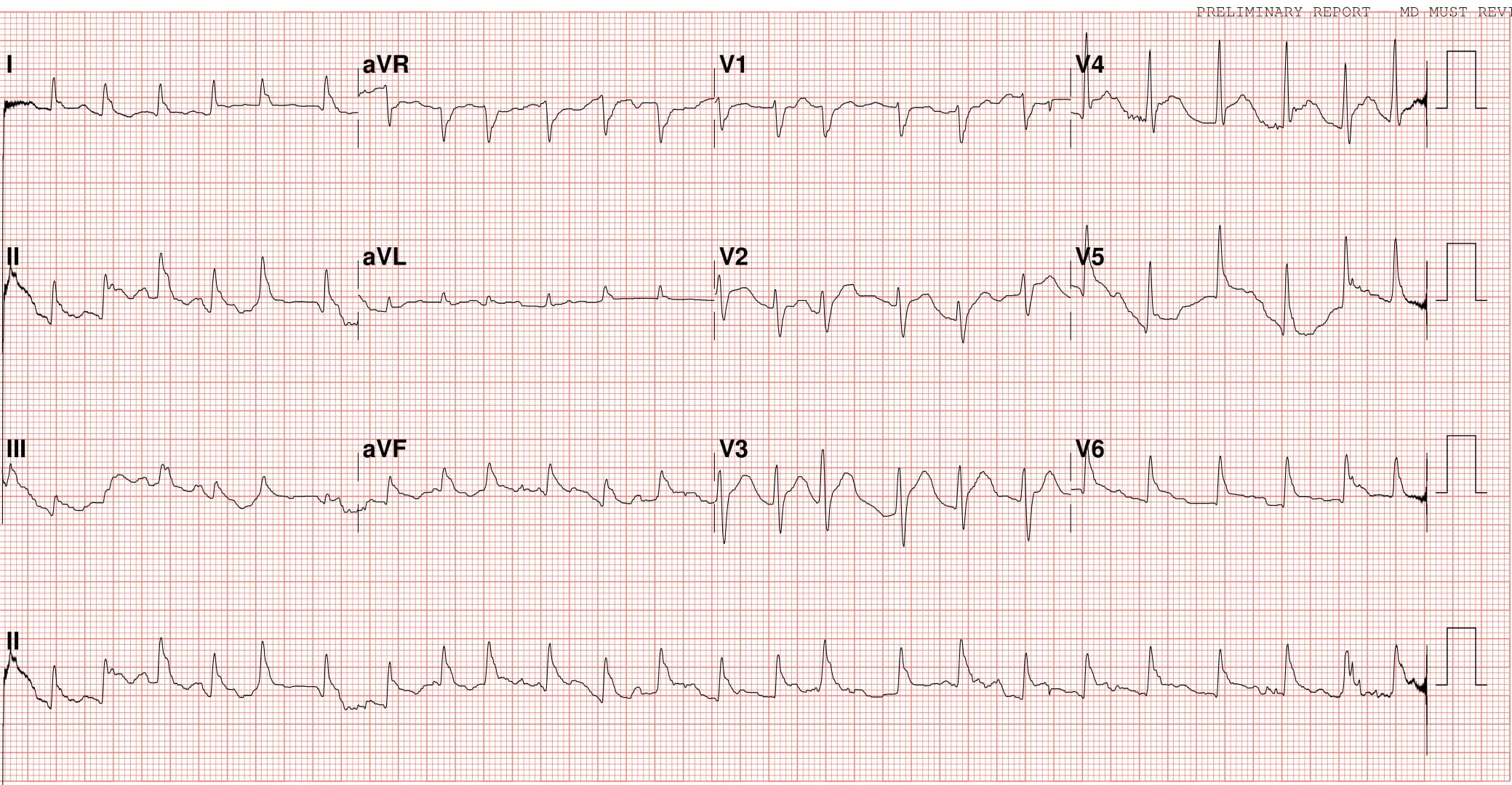 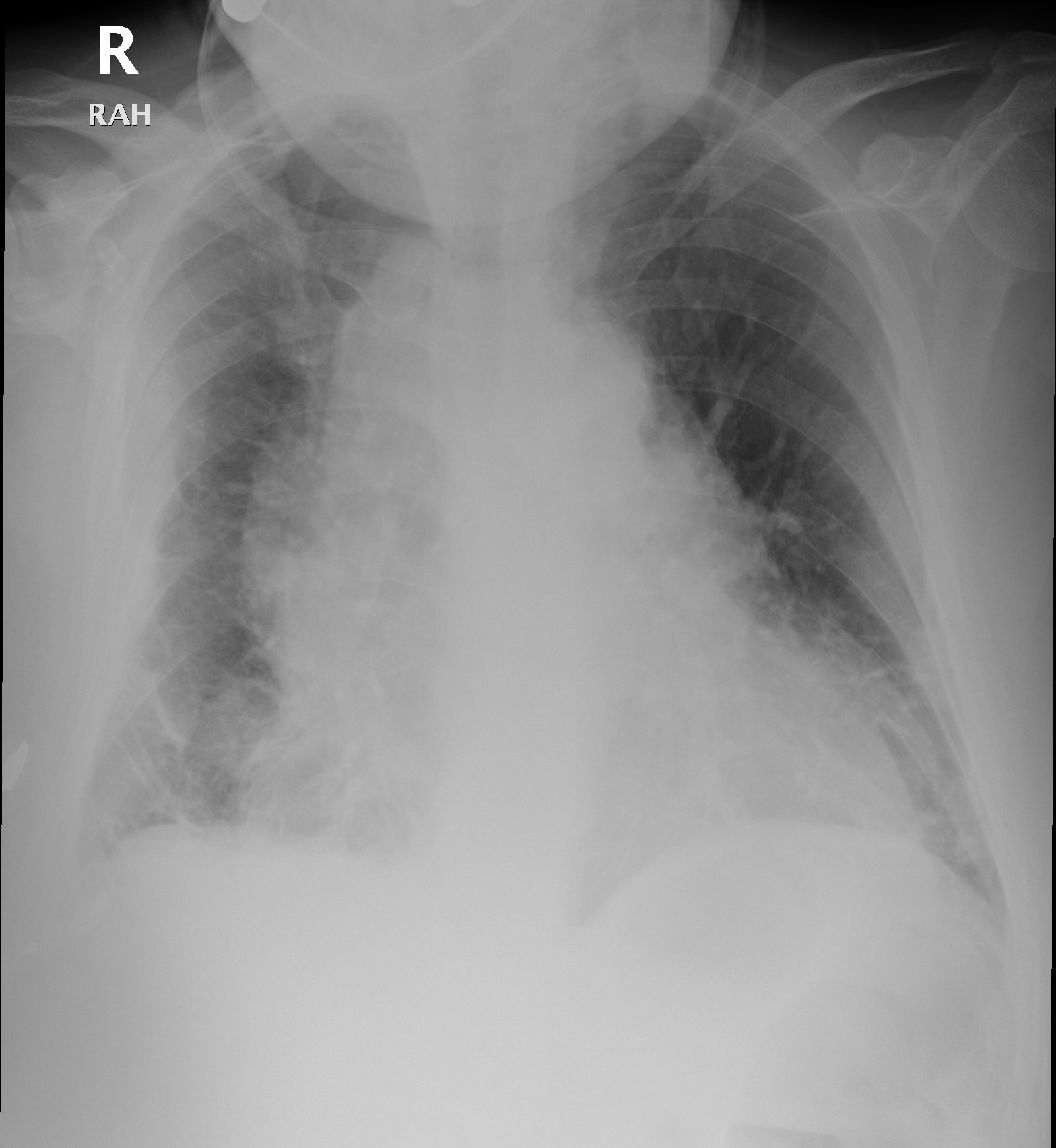 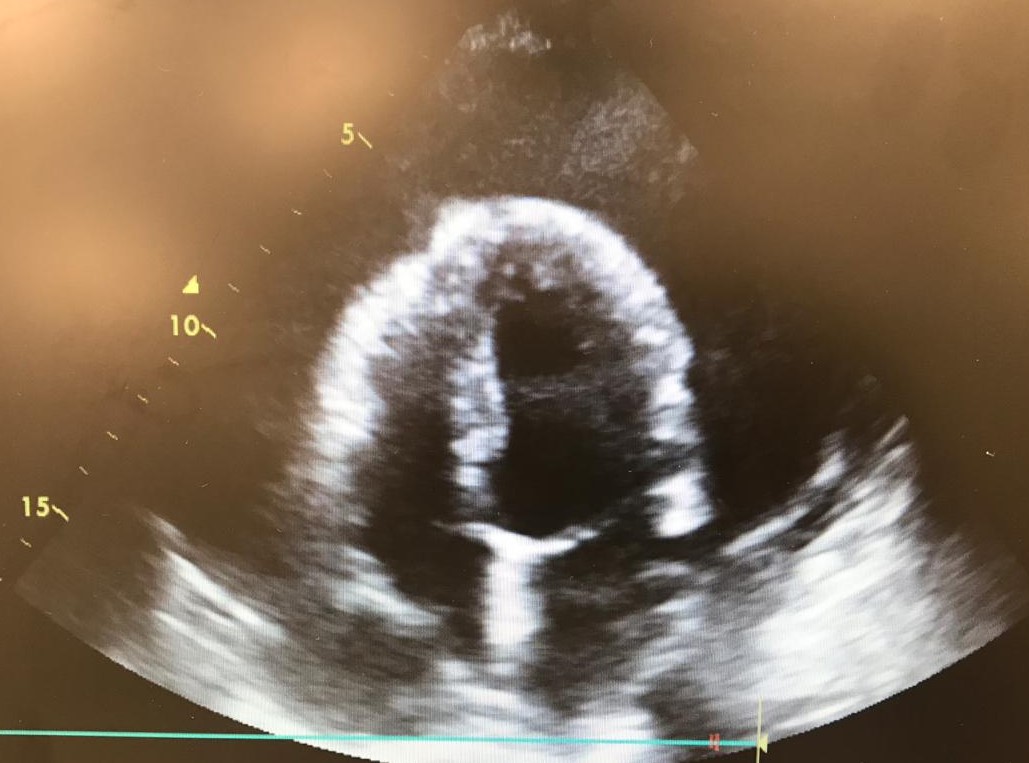 Pericardiocentesis was performed immediately and removed around 300 ml of yellowish fluid from the pericardium [Figure 4] improving his symptoms. He was started on empirical antibiotic including Tazocin and Moxifloxacin and later on changed to Meropenem and Vancomycin according to the culture and sensitivity report of drained fluid which grew Streptococcus Morbillivirus. Simultaneously, the patient was referred to the maxillofacial team for the submandibular swelling and they made an assessment of left submandibular abscess and advised to do computerized tomography (CT) scan with contrast of the neck and chest. In the next 24 hours there was additional collection of more than one liter of pus through the pericardial drain. The CT scan was reported as enhancing fluid collection noted with multiple pockets of air in the left parotid submandibular region with a large pocket in the submental region extending to the neck with minimal fluid collection in the right submandibular region [Figure 5]. 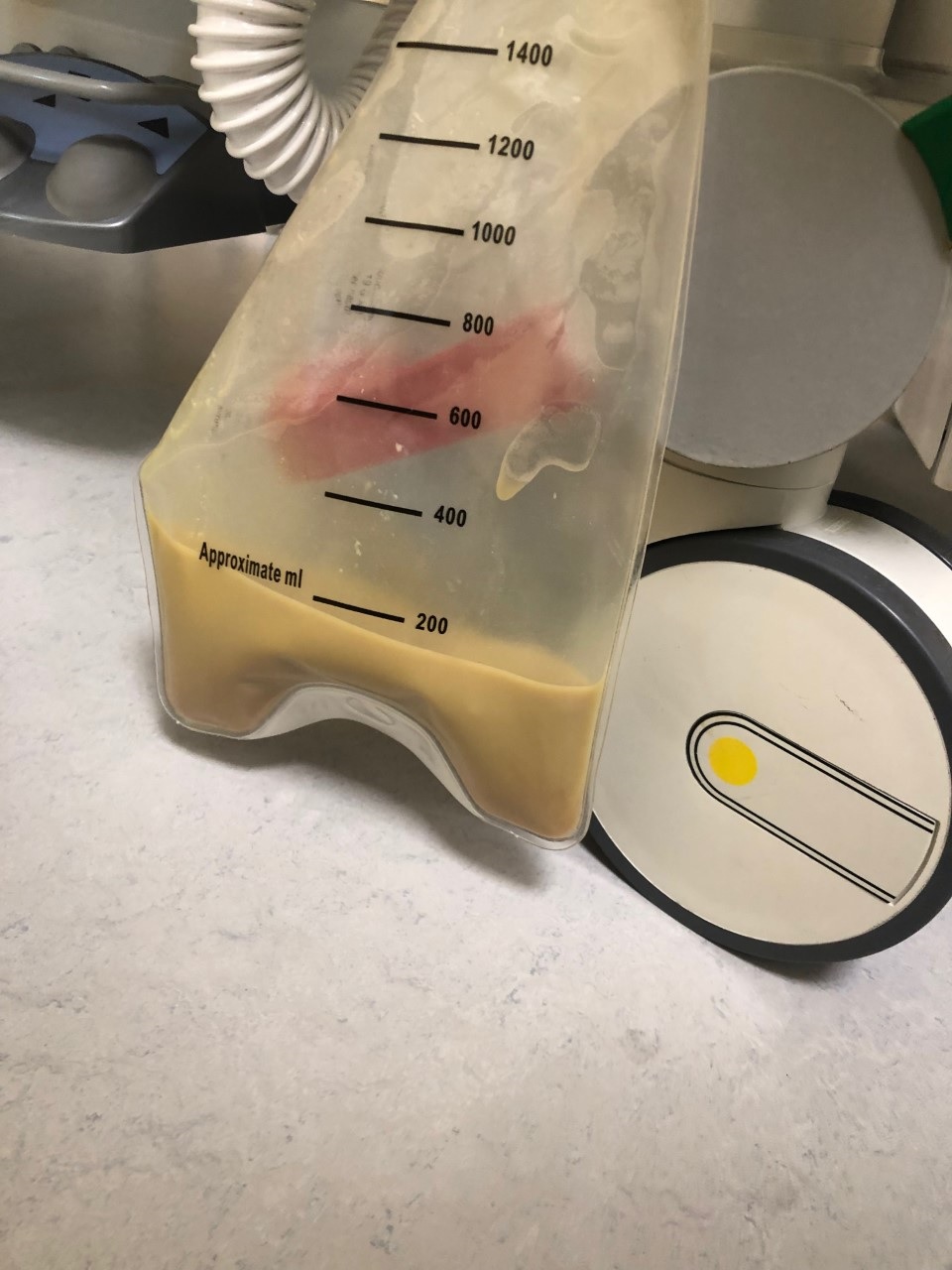 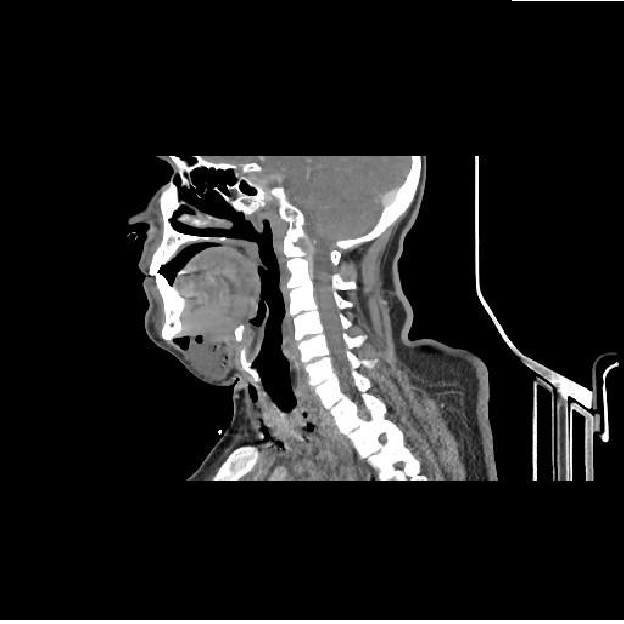 Figure 5: CT scan showing submandibular abscess with air pockets and the extension of the infection to the neck.

The collection is also noticed to extend into the supraglottic, glottis and para pharyngeal regions with extension into the mediastinum involving the anterior mediastinum [Figure 6]. Additionally, pericardial effusion with pericardial thickening was also noted. The patient was taken by the surgeons for an urgent drainage of neck and mediastinal abscess and pericardial window. After one week of the surgery and completion of in total 14 days of antibiotics blood investigations showed improvement of WBC to 9500/ul, platelet to 253000/ul sodium to 138mmol/l, creatinine to 0.7mg/dl, CRP to 38.8 mg/l and PCT to 0.24 ng/ml. His Liver Function test improved to bilirubin of 1.3 mg/dl alkaline phosphatase of 155 U/L and ALT of 48 U/L. Post-surgery the patient stayed in intensive care unit on mechanical ventilator and he required inotropic support. Additionally, he had an episode of Supra Ventricular Tachycardia (SVT) and amiodarone was given which reverted his rhythm to sinus. After that, his inotropic support was tapered down and he was gradually weaned off the ventilator and extubated. Meanwhile, antibiotics were continued. Our patients’ condition was improving, remained hemodynamically stable, chest tubes removed and his inflammatory markers improved. 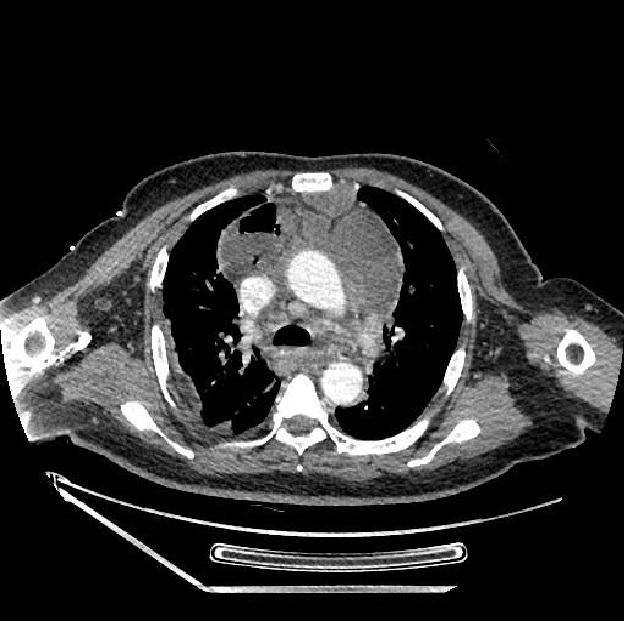 Figure 6: CT scan showing the spread of the infection in the anterior mediastinum.

Cardiac empyema is a localized infection of the pericardial space, characterized by the presence of gross pus in the pericardium [3]. It is caused by either hematogenous spread or contiguous spread. The pathogens most commonly are staphylococci, streptococci and anaerobes [4]. In our case the spread was from a submandibular abscess through the anterior triangle of the neck into the mediastinum. It has also been reported in another case to spread through the retropharyngeal space hence allowing its spread into the pericardial space [5]. The mechanism of spreading of infection through the head and neck was reported as early as 1938 when Pearse reported one of the first cases of a dental abscess presenting with acute mediastinitis [6]. Being a rare but serious complication, mediastinitis should be diagnosed early and managed aggressively as it has as high mortality as 25 - 50 % in different reports. The main factor attributing to reduction of mortality rate in recent years is the early detection contributed by the invention of imaging techniques [4]. In general, localized purulent pericardial effusion treatment consists of surgical pericardial drainage and antimicrobial therapy. When presenting with cardiac tamponade it can have a poor deadly prognosis if treatment is not started straightway. Therefore, in our patient instant drainage was done via pericardiocentesis and empirical antibiotic therapy was started. The unusual finding of purulent drain made us suspect the spread of infection from a different area. Clearly the presence of a neck swelling on examination in our patient pushed for a CT scan to be performed which discovered this phenomenon. A case report established by Spartalis et al. discussed a case similar to ours. The case was reporting an acute descending mediastinitis and pericardial effusion developing after a complicated odontogenic infection and was treated similarly; by maintaining the airway, immediate empirical antibiotics coverage, urgent surgical drainage, change of antibiotic according to pericardial fluid culture and intensive care supportive treatment [7]. The early intervention is supported by a third case reported by Torre et al., in which in their case a delay of 5 days to perform the CT scan has resulted in worsening of the patient’s condition and progression of the spread further down the mediastinum [8].

In conclusion, we would like to emphasize on the recommendation by Freeman et al. on the urgent radiographic investigation within 48-72 hours of deep neck infection and mediastinitis in the setting of no clinical improvement or after surgery to reduce mortality [9]. It is supported in our case by the fact that the chest tube continued to drain post-surgery.