Copyright: This is an open-access article distributed under the terms of the Creative Commons Attribution License, which permits unrestricted use, distribution, and reproduction in any medium, provided the original author and source are credited. Copyright © 2020; Michel de Lorgeril

The Brugada syndrome (BrS) is an electrical heart disease with complex inheritance (some cases with SCN5A mutations), characterized by specific electrocardiogram (ECG) markers and high risk of associated lethal ventricular arrhythmias [1]. The ECG signature of BrS consists of right precordial ST-segment elevation (≥2 mm) followed by negative T waves [1]. It sometimes includes the findings of right bundle branch block (RBBB). In certain cases, the typical ECG pattern is present intermittently which creates a potential problem for reaching the diagnosis of BrS. Another problem in diagnosing BrS is the presence of so-called Brugada phenocopies (BrPs), i.e. an acquired Brugada-like ECG pattern that are visually identical and indistinguishable from true BrS [2]. This ECG pattern can be caused by other conditions including ischemia of the ventricular septum and/or right ventricle or by taking certain medications [2]. Proton-pump inhibitors (PPIs) are widely prescribed, often for prolonged use, and have been associated with electrolyte disturbances and cardiac arrhythmias [3,4]. We hereby present for the first time the case of a patient with an ECG suggestive of BrS while taking PPI; but no other medication known to cause BrS. The BrS ECG pattern disappeared a few months after stopping the medication.

BV is 42-year old healthy male with no significant medical and surgical history, no family history of cardiovascular disease. He is totally asymptomatic.

During a medical check-up at work in June 2019, the recorded ECG shows a quite typical BrS aspect (Figure 1A). The occupational doctor of the company decided to refer him on to an expert cardiologist to confirm the diagnosis of BrS and manage the actions to be taken.

The cardiologist initially recorded a BrS ECG pattern (Figure 1B) and a couple of weeks later another BrS ECG pattern was recorded (Figure 1C). At that moment, the patient had stopped taking the PPI (Esomeprazol 40mg/day) since two weeks. The PPI was actually prescribed two months earlier for gastric pain that was not persistent when PPI was stopped. It was the first prescription of a PPI and the first episode of a gastric problem requiring treatment. No replacement medicine was taken by the patient. Six months later an exercise test and a 24-hour Holter monitoring were performed which could be considered as normal. Finally, no pathogenic loss-of-function SCN5A gene variant was identified. The BrS ECG pattern thereafter progressively disappeared and in July 2020, only the RBBB was still present (Figure 1D). At that time, the patient found an ECG dating from 2014 with no BrS ECG pattern (Figure 1E). It is important to note that the three first ECGs (A,B and C) were done at three different locations, implying that the Brugada pattern was not just a question of electrode emplacement.

It appears therefore that the PPI is likely to be the cause of the BrS ECG pattern. The best way to confirm this would have been to undertake a rechallenge test. However, as PPIs are known to cause cardiac arrhythmias, it was considered unethical to again prescribe such a medication in this patient. It has to be noted that no other antacid medicine was taken by the patient.

If the PPI prescribed in this man really did provoke the BrS ECG pattern, another question would be whether other PPIs could have the same effect and whether this acquired (transient) BrS ECG pattern could induce cardiac arrhythmias.

We believe that it is important to alert physicians about the possibility that PPIs could induce a BrS ECG pattern with potential cardiac complications and increased mortality [5]. 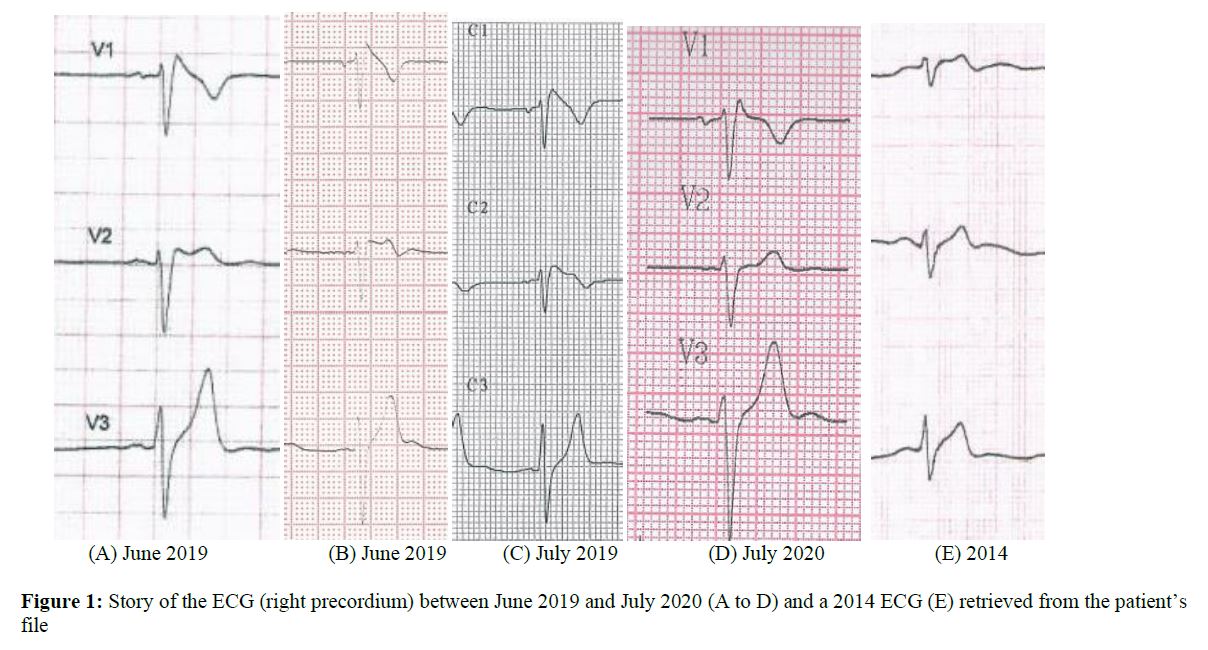