Copyright: This is an open-access article distributed under the terms of the Creative Commons Attribution License, which permits unrestricted use, distribution, and reproduction in any medium, provided the original author and source are credited. Copyright © 2021; Boukhmis Abdelkader

Methods: We prospectively enrolled 145 consecutive patients undergoing isolated CABG between June 2014 and June 2016. We performed at 6 months of follow up a coronary computed tomography angiography (CTA) in patients whose stress tests were negative and an invasive coronary angiography (ICA) in the opposite case.

Conclusions: 6 months after CABG, RITA and LITA had good patencies especially on LAD, while SVG was occluded in almost a third of cases. On the circumflex and right coronary arteries, SVG patency was significantly lower than that of RITA.

Coronary bypass graft failure reduces long-term survival and increases recurrence of angina as well as iterative revascularizations [1]. This multifactorial phenomenon amplifies over time due to thrombosis, intimal hyperplasia and atherosclerosis [2]. In the 1980's, it was recognized that long-term survival was enhanced in patients undergoing coronary surgery when the left anterior descending (LAD) was grafted with a left internal thoracic artery (LITA) rather than a saphenous vein graft (SVG) [3]. This difference was predicated, at least in part, due to greater and more durable patency of the LITA compared to an increased early occlusion rate and later progressive atherosclerosis of SVG [4]. Nowadays, widespread use of the SVG continues despite its disappointing long-term patency and the right internal thoracic artery (RITA) is still marginalized although being biologically identical to LITA. This is due to the fact that the harvesting of both internal thoracic arteries (ITAs) exposes to the risk of deep sternal wound infections and requires a longer learning curve. The evaluation of the different grafts patency, according to their target coronary arteries and their configurations, will guide the choice of grafts and thus improve coronary artery bypass grafting (CABG) outcomes. Until now, the gold standard of the coronary imaging remains the invasive coronary angiography (ICA). However, current coronary computed tomography angiographies (CTA) have emerged as an accurate diagnostic tool of coronary artery bypass grafts occlusion and stenosis, with greater patient acceptance than the conventional ICA [5].

Aims of this study

The purpose of this angiographic study was to assess the coronary artery bypass grafts patency, at 6 months of follow up.

This mono-centric, observational and prospective study, of patients undergoing CABG surgery, was conducted between June 2014 and June 2016. It was approved by the institutional review board of the Faculty of Medicine of Algiers. Written and informed consent for stress testing and coronary angiography was obtained from all participants.

a. Sample size and power of the study:

b. Inclusion and exclusion criteria:

A standard median sternotomy was performed in all patients. All ITAs were harvested as skeletonized grafts. Radial and gastro-epiploic arterial grafts were not used in our daily practice. SVG grafts were classically harvested without their fat tissue. We have used a single aortic cross-clamp with antegrade blood cardioplegia to construct all distal and proximal anastomoses. On pump CABG was our procedure of choice except for heavily calcified aortas, patients with hemopathy or severe left ventricular dysfunction for which off pump CABG was performed.

e. Stress testing and coronary imaging at 6 months of follow up:

Asymptomatic patients benefited from an exercise electrocardiogram while myocardial perfusion scintigraphy was performed in patients with angina or in asymptomatic patients with intermittent claudication or with positive or inconclusive exercise electrocardiogram. The coronary bypass grafts patency has been assessed by a CTA in patients whose stress tests were negative and by an ICA in the opposite case. Coronary grafts were evaluated according to the Fitzgibbon classification [1], which classifies the grafts as: A (Excellent), B (Fair: graft with a size ?50% of that of the bypassed coronary artery) or 0 (occluded).

A total of 145 consecutive patients (119 men and 26 women), with an average age of 59.15 +/- 9.6 (37 to 84) years; who underwent isolated CABG six months before, were enrolled prospectively. Although CABG on-pump was our procedure of choice, 6 patients were operated on off-pump due to extensive aortic calcifications (n = 5) or preoperative thrombocytopenia (n = 1). The mean number of distal anastomosis per patient was 2.4 +/- 0.8 (1 to 5). Bilateral internal thoracic artery (BITA) grafting was performed in 61.4% (n = 89/145) of patients, more frequently with insitu configuration than with a composite Y-graft (75.3 % versus 24.7%). At 6 months of follow up, 93.1% (n=135/145) patients were asymptomatic among which 131 patients underwent exercise electrocardiogram, while 03 patients with a left Bundle Branch Block and 01 patients with intermittent claudication underwent a myocardial perfusion scintigraphy. This myocardial perfusion single photon emission computed tomography (SPECT) was also performed in 10 patients with angina class II (Canadian cardiovascular. society classification) and 30 asymptomatic patients whose exercise electrocardiogram testing was positive or inconclusive. One hundred forty-five patients benefited from 134 CTA and 11 ICA; which allowed the analysis of 321 coronary grafts (143 LITA, 89 RITA and 89 SVG). (Figure 1). Baseline characteristics of patients are summarized in table 1. 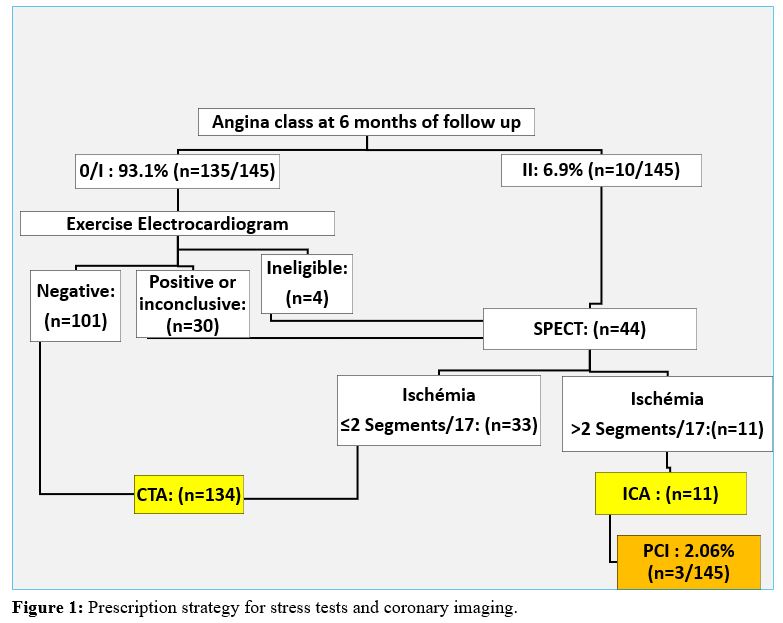 After this short follow-up, we found that the SVGs were either perfectly patent (type A), or completely occluded (type O), with no sign of intermediate stenosis, whether anastomotic or truncal. Furthermore, 05 LITAs and 04 RITAs presented a “string sign”, however their sizes were at all points greater than 50% of that of the target coronary artery. Since these ITA grafts did not meet the definition of type B, they were classified as type A.

Patency rate of internal thoracic arteries (ITAs) grafts: The average ITAs patencies were 95.1% for LITA and 84.3% for RITA. The best patencies were obtained when these grafts were anastomosed to the left anterior descending artery (LAD): 96.3% for LITA, and 87.5% for RITA (Table 2).

Among the 145 patients who underwent a coronary imaging at 6 months of follow-up, only 3 patients (2.07%) underwent a percutaneous coronary intervention (PCI) (Figure 1). The other 08 patients whose stress tests were positive and underwent an ICA did not need iterative revascularization because their grafts were patent and their native coronary arteries did not show any evolution of atherosclerosis. These patients underwent incomplete revascularization related to highly calcify coronary branches with poor run-off or less than 1 millimeter lumen. Their symptoms were controlled with an optimal medical treatment.

This study objectified that after 6 months of follow-up, the occlusion rate of SVG is alarming, since 35.96% of patients having undergone an arterio-venous CABG had an occluded venous graft, against 33% in the multicenter study "RIGOR" [6]. We also noted that, in the short term, the SVG patency obeys the law of "All or nothing", which suggests that, in this time interval, their occlusion is due to a thrombotic mechanism. This occlusion mechanism seems to intervene early since Bassri noted that after the first postoperative week, SVG occlusion rate is around 10% [7]. Furthermore, Goldman [8] objectified that if a SVG was patent at 1 week, that graft had a 68% of being patent at 10 years. This clearly demonstrates that the early postoperative period is crucial for the patency of venous grafts. In 2016, ACC / AHA Guideline [9] suggest that dual antiplatelet therapy (Aspirine with clopidogrel initiated early postoperatively) for 12 months after CABG may be reasonable to improve vein graft patency. Our patients were operated before the publication of these guidelines and therefore received only Aspirin throughout their follow-up. This may partly explain their high rate of SVGs occlusion. Later; the SVGs which represent the overwhelming majority of conduits used worldwide for routine CABG, are also subject to midterm fibro-muscular changes and late atheromatous occlusion [2,8]. Lopes objectified in a randomized controlled trial [10] that the rates of vein-graft failure at 12 to 18 months was 46.7% after endoscopic harvesting and 38% after direct vision harvesting. The SVGs used in the population of the present study were skeletonized according to the conventional open technique. This can partly explain the occlusion of a third of them after Sousa et al [11] demonstrated that the “No Touch” harvesting significantly improves the patency of SVGs compared to the conventional technique. The excellent early patency of LITA to LAD, noted in our study and by others authors [7, 8,12], confirms its status as cornerstone of CABG surgery. The present study objectified that the patency of RITA is significantly higher than that of SVG on the right and circumflex coronary territories, thus corroborating the finding of Tatoulis in his angiographic study [12]. RITA must therefore be the graft of choice to revascularize these arteries, apart from contraindications to the simultaneous harvesting of both ITAs (Obese and diabetic women, chronic bronchitis) or in the case of uncritical stenosis of the RCA [13].

Tatoulis noted that LITA and RITA, which are biologically similar, had comparable patencies for the same target coronary. This finding, confirms the safety of BITA grafting with in situ crossover RITA to LAD, and offers the surgeon more flexibility to revascularize all the left coronary arteries, including the distal marginal one, using only 02 ITAs with an insitu configuration. Although it has been shown that the patency of the RITA is better with BITA-Y configuration than with that of the insitu BITA [14], the statistical power of our study was not high enough to confirm this difference. Indeed, BITA-Y grafts can easily reach their coronary targets and allows trimming off the distal end of ITAs, known to be more spastic [15]. Glineur objectified in a recent randomized trial that this better patency of RITA with BITA-Y grafting resulted in fewer major adverse cardiovascular and cerebrovascular events, compared to the in situ BITA configuration [16]. Since LITA-RITA Y grafting makes it possible to achieve significantly more distal arterial anastomosis without affecting the patency of its grafts, total arterial revascularization is possible with this configuration, which saves the surgeon the need for another arterial graft. We also found that the two ITA grafts had better patency on LAD than that on the circumflex marginal arteries. This was previously noted by Tatoulis [4] and can be explained by the greater operative difficulty encountered during revascularization of the circumflex marginal arteries, as well as by the possibility of occurrence of tension and or torsion in the ITA grafts, especially when crossing the transverse sinus.

Limitation of this study:

The non-consent of 68 asymptomatic patients (30.36%. n=68/224) to underwent stress testing and coronary imaging may have reduced mean patency of the different coronary bypass grafts. The statistical power of this study is not sufficient enough to detect a statistically significant difference between LITA and RITA patencies for same target coronary arteries, as well as the impact of the configuration of BITA grafting (BITA-Y or in situ BITA) on the patency of RITA.

At 6 months of follow up, RITA and LITA had good average patencies, especially on LAD, while SVG was occluded in almost a third of cases. On the circumflex and right coronary arteries, RITA patency was significantly higher than that of SVG and may therefore be the graft of choice to revascularize these territories. These findings should encourage the use of bilateral internal thoracic artery grafting except in patients at risk of developing deep sternal wound infections.