Welcome to Journal of Physical Health and Sports Medicine

Copyright: This is an open-access article distributed under the terms of the Creative Commons Attribution License, which permits unrestricted use, distribution, and reproduction in any medium, provided the original author and source are credited. Copyright © 2019; Amir Vazini Taher

Motor behavior scientists had previously tried to find the factors influencing motor skills learning and traditionally emphasized on the importance of practice and experience [1,2]. Since most of skill shave both physical and cognitive aspects, it is suggested that cognitive interventions like mental imagery and observational practice can facilitate the learning of motor skills as well as physical practice [3-6]. Motor skill acquisition process usually occurs when information transfers between instructor and learner. One of the most current and efficient methods of information transfer is demonstration ofaction. Observational learning is the process in which learner acquires the necessary information of movement by observing a model while performing movement [7-9]. Review of literature in this area indicates that learner can improve his/her performance by observing others’ performance [10-13]. These findings can be explained by the social learning theory. When the individual observes a pattern, he/she translates the information of the observed action to the mental symbolic codes and these codes will be the basis for a mental image in the memory. This mental image is used as a guide for the performance of the skill and a criterion for detecting and correcting errors [14]. In general, observation of action is helpful for the representation of action, because it provides the obvious stimuli related to the movement [15-17].

Numerous studies have explored the role of observational practice and mental imagery on performance and learning of motor skills separately and indicated that these methods have more benefits when combined with physical practice than when used individually [8,12,28]. Since the previous researches frequently studied the neurological basis underlying of these methods rather than the behavioral mechanisms, the purpose of this study was to investigate the combining effect of observational practice, mental imagery and physical practice on performance and learning of a soccer dribbling task in young amateur girls and boys.

Recently, Munroe-Chandler et al. (2007) studied the young (7-14 years) athletes’ imagery use. All age groups reported using all five functions of imagery. Results also revealed that children (7-10 years) reported using less MG-A and MG-M imagery than their older counterparts (11-14 years). This could be due, in part, to the fact that as children age, their long-term memory improves, allowing them to acquire and retain knowledge with less difficulty (Santrock & Yussen, 1992). As the participants of the present study were 12 to 16 years old boys, the experimental hypothesis of this study is that the mental imagery is the predominant method in learning soccer dribbling. It is hypothesized also that the combining effect of mental imagery and physical practice would cause the optimal learning effect.

The task was the soccer dribbling. The experiments conducted in a standard soccer pitch using a standard ball. The soccer dribbling test required participants to dribble a soccer ball as fast as possible through a slalom course that consisted of six cones set 1 meter apart (based on Beilock, Carr, MacMahon and Starkes, 2002). We used the imagery questionnaire-revised (MIQ-R) to evaluate the participants' mental image reliability [26]. This questionnaire includes8 items and measured both visual and kinesthetic mental imagery ability. Internal consistency of MIQ-R had been reported 0.87 for visual subscale and 0.91 for kinesthetic subscale.

Figure1: The groups’ performance in the pretest, immediate and delay retention stages. 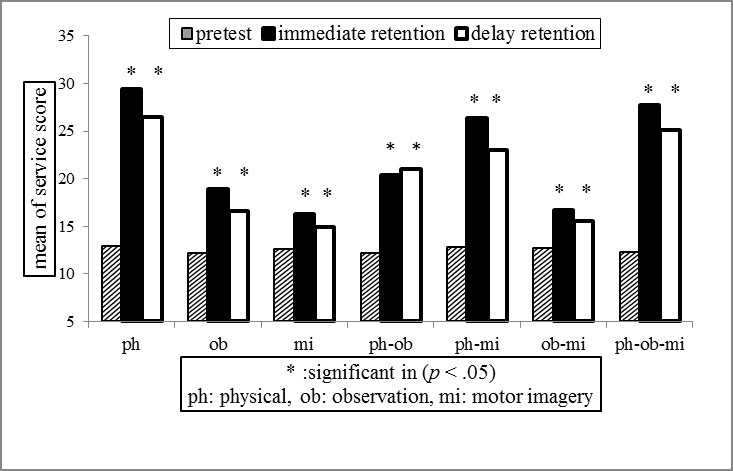 Figure2: The groups’ progress in the immediate and delay retention stages. 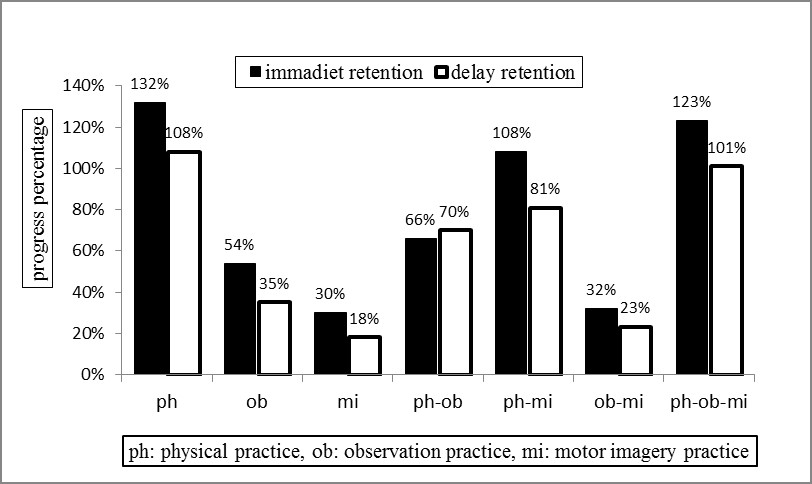 The purpose of this study was to investigate the facilitative effect of combining observational practice with mental imagery on immediate and delayed retention of soccer dribbling task. The findings indicated that all practice groups had a significant improvement on immediate retention and this improvement was retained by the groups on the delayed retention. Also, the group observation-mental imagery-physical had the best performance after the physical group. These findings revealed that besides physical practice, cognitive interventions such as mental imagery and observation could also influence the learning of the motor skills. This was in consistency with the prior researches of Buchanan [15], Hayes et al [23] and Shafizadeh [29].

It was also found in the current study that combined practice groups of physical-observational and physical-mental imagery attained better results in comparison with the mere observational and mental imagery groups. This finding suggested that when the cognitive instruction methods are accompanied with physical practice, the learning will be strengthened compared with the mere use of the cognitive methods which is congruent with the findings of Shea, et al. [11], Tae-Ho, et al. [12], Olsson et al. [24], Korobeynikov, Myshko, Pastukhova, &Smoliar, [30]. It is likely that the reason behind the improvement of learning in combined groups is the similar nervous mechanisms in physical and cognitive methods as the neurological researches investigating mind’spattern of activity during mental imagery, observation and real performance have pointed to an overlap of the active areas of mind such as supplementary motor cortex, premotor cortex and cerebellum [11,12,23,31].

Furthermore, the findings showed that the combined group of mental imagery-physical gained better performance compared with the combined group of observation-physical. This part of our findings was in consistency with the studies of Tae-Ho, et al. [11], on golf putting, on free throw and SooHoo, Takemoto, & Mc Coulagh [20], on weightlifting, Matvienko, & Kuznetsov [32], on play chess, Myshko [33], on sport dance. Since the proficiency pattern and the kind of task have been noticed as the factors influencing efficacy, the possible dissimilarity of this study and the studies mentioned above might be in the kind of pattern and the task used in the practice. Tae-Ho Kim in his study used the task of golf putting and skilled pattern while active performance of a pattern during learning was used to perform soccer dribbling task in the current study.

In addition, results implied a better performance for the combined group of mental imagery-physical compared with the combined group of observation-physical. In the initial stage of learning motor skills, the learner must acquire the correct pattern of the action to perform and understand it. The learner can acquire necessary information to perform an action via observation of the pattern. In other words, observation can be effective for the creation of obvious and precise representation of the action. It has also been signified in the previous studies that mental imagery is also effective in the creation of representation of the action. In the literature on this area, the absence of an obvious and precise image in the memory to create and compare with an external image has been identified as a problem for the efficacy of mental imagery. Therefore, the combination of observation practice with mental imagery may probably be effective because an obvious image of the pattern of the action will be constructed in the mind via observing an action and this image will be used as a criterion to compare mental imagery with the observed action during mental imagery.

This study indicated that in immediate retention, both observational and mental imagery methods increased learning when used alone, however, their effect was not strongly evident as they were combined with physical practice. These methods were not efficient enough when they were combined with each other but yielded surprising results when combined with physical practices and the nominated group gained the best performance. Therefore, cognitive interventions increase learning, though to a smaller scale. However, when they were combined with physical practice, the learning would be multiplied. All in all, the finding of this study supports the prior researches concerning the facilitative effect of mental imagery and observation on the learning of motor skills [2,22,24,34]. While it is inconsistent with the studies of Te Ho Kim, et al. [12], and SooHoo, &Mc Coulagh (2004) in combining these methods with physical practice [35]. The current study suggested that in inexperienced amateurs, the combination of mental imagery-physical had a better outcome in comparison with the combination of observational-physical and the best result would be achieved when the three methods are combined together. Finally, it is suggested here that instructors utilize the combined practice methods in the practice sessions to enhance the efficacy.