Welcome to Open Journal of Dentistry and Oral Health

Copyright: This is an open-access article distributed under the terms of the Creative Commons Attribution License, which permits unrestricted use, distribution, and reproduction in any medium, provided the original author and source are credited. Copyright © 2020; KITAJIMA Kayoko

Root-end restoration using Mineral Trioxide Aggregate (MTA) was performed on two patients who received root canal treatment but had poor progress. In one case, a large amount of Calcium hydroxide(Ca (OH)2), a intracanal medicament, escaped from a wide-open apex, stagnated around the tooth root, and the apical lesion did not disappear. The other case is a case where the root canal at the apical part has a complicated anatomical form, the root canal cannot be tightly packed, and the apical lesion has not disappeared. Root-end restoration using MTA was performed on these two cases, and improvement of the lesion was confirmed. From these results, it was shown that Root-end restoration using MTA is effective for patients with poor prognosis of root canal treatment for which the apical portion cannot be tightly packed for various reasons.

Mineral Trioxide Aggregate (MTA) is a general material for endodontic treatment and is indicated widely as perforation repair, apexification, pulp capping or root-end filling[1]. At present, the adaptation of MTA in Japan is restricted only to direct pulp capping, and it does not accept to root canal filling, restoration of external resorption, retro filling and closing of perforationon the insured coverage. At our university, it is used only in the example of a patient giving informed consent, based on recognition from Ethical Review Board. This study reports two clinical cases with informed consent. Although the prognosis was poor with normal root canal treatment, root-end restoration using MTA was performed, and these two cases followed a favorable healing process.

Case 1: A 25-year-old male was referred to an endodontic clinic from a pediatric clinic for treatment of external resorption of upper left central incisor tooth. The tooth was replanted for luxation by a traffic accident when the patient was 9 years old, and external root resorption was revealed at 24 years old?Figure 1). The root canal treatment was started in the pediatric clinic; however, the prognosis was not preferable because of the over extension of calcium hydroxide paste?Figure 2). The retreatment was referred to our clinicafter 10 months and was tried by a common procedure?Figure 3). Finally, the retro filling with MTA was applied to the cut root end cavity (Figure 4,5). Thirteen months later?Figure 6), the apical healing was confirmed. 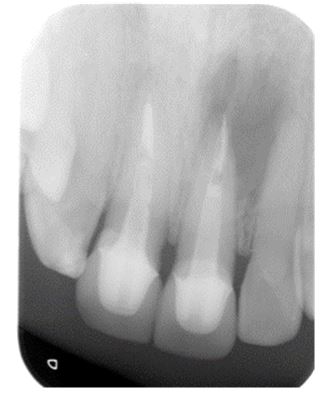 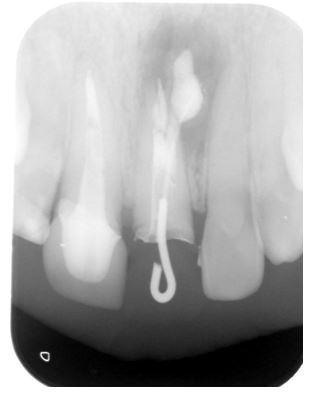 Figure 2: Xray image when patient was treated at the pediatric clinic. 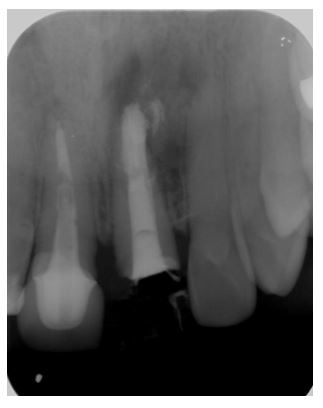 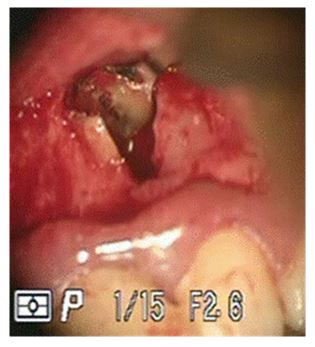 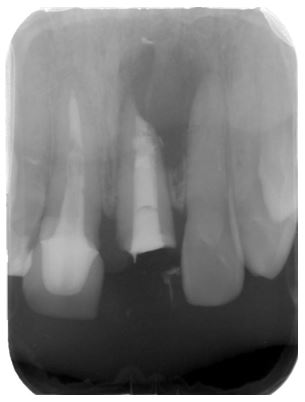 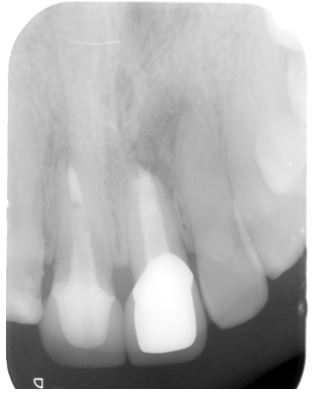 Case 2: A 35-year-old male patient visited to get a second opinion concerning his lower right first premolar. The mandibular first premolar was treated 5 years ago because of dental caries by a general dentist, and the pulp extirpation was performed. The sinus tract appeared on the apical gingiva after three years. The 3D image by cone beam CT showed the apical periodontitis with the defect of buccal cortical bone?Figure 7). The dental X-ray showed the wide root apex of the involved tooth and divided roots canal were doubted.?Figure 8? Since the retreatment was difficult for the anatomical problem, root-end restoration was carried out with MTA?Figure 9,10). Patient was followed up after oneand ten months later?Figure 11,12? the apical lesion disappeared, and the good prognosis was confirmed. 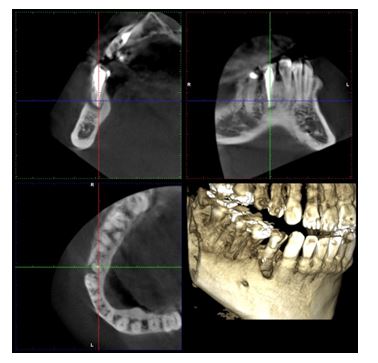 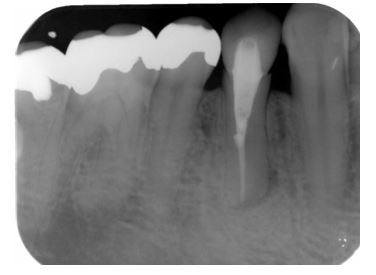 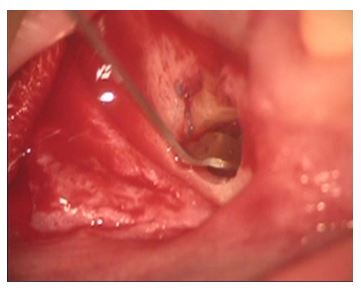 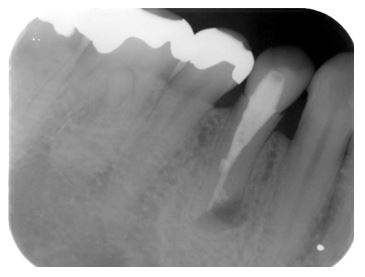 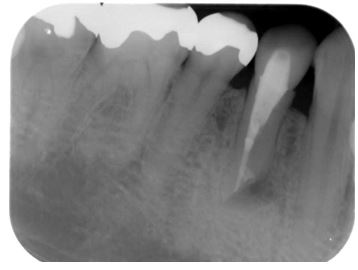 Figure 11: Xray image after one month of the root-end restoration using MTA. 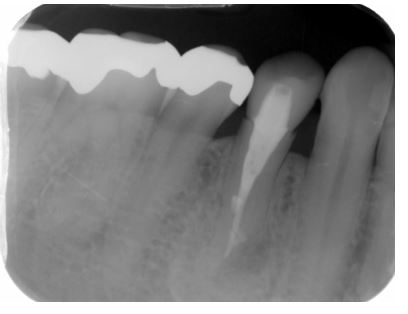 In the event that the root canal system and periodontal tissue are accidentally transported, a sealant is used to protect the teeth. As its material, gutta-percha, polycarboxylic acid cement, zinc phosphate cement, zinc oxide eugenol cement, IRM cement, EBA cement, glass ionomer cement, composite resin and the like have been used. However, these have not always been sufficient as long-term tight-sealing materials. It is considered that sufficient drying of the adhesive tooth surface is indispensable for these to contribute to the tight sealing. However, excessive drying causes great damage to cells on the root surface. MTA was first developed at Loma Linda University in 1993 as a hardened hydraulic cement. That is, it is said that MTA is cured by contact with moisture and maintains a stable state in water after curing [2]. The blockade of MTA is higher than that of amalgam and SuperEBA [3-12], and it is superior in the stain leak test [3,4], bacterial leak test [5], and endotoxin leak test[6]. The suitability of the margin is better than amalgam, IRM and SuperEBA [3]. In addition, antibacterial effects have been confirmed against some resident bacteria in the oral cavity [13]. The toxicity of MTA is lower than that of IRM and SuperEBA [14] in radioactive chromium emission measurement tests, and it is reported that it has high biocompatibility [7,15-18]. Histological studies using amalgam and MTA to reverse the root canal filling and root bifurcation in dogs [8] and reverse root canal filling of monkey teeth [12] showed that MTA has less inflammation of surrounding tissues and is favourable. A long healing process was observed [11-13]. Cementations addition of MTA surface layer after a long period of time, which was not seen with amalgam, was confirmed [14,15]. These results suggest that MTA is effective as an inverted root canal filler. Many subsequent reports have revealed that MTA is an antibacterial, antifungal, biologically active, and highly biocompatible material with high blockade [2]. In this case, when MTA was applied to patients with poor prognosis of root canal treatment, the apical X-ray transmission image disappeared, and good results were obtained. This is considered to be due to the fact that calcium hydroxide is formed in MTA [19-22] and it has the ability to induce hard tissue [23,24]. MTA has been considered as a promising material for root canal fillings, inverted root canal fillings, perforation sealants, pulp capping materials, pulpotomy materials, immature teeth and necrotic pulp teeth. It is noted that the mechanism of action of MTA is that hydroxyapatite crystals are added to MTA when it comes into contact with tissue fluid and can serve as a starting point for calcified tissue formation [25-28], and its suitability as a sealant has been evaluated.From this case report, it was found that the application of MTA as a reverse root canal filling material for surgical endodontic treatment was favourable for patients with a poor prognosis of root canal treatment. The usefulness was suggested.It has been pointed out that the MTA curing time is long. There is a possibility of discoloration, and it is expensive. However, a white MTA that eliminates the mixture, causing discoloration was developed. And the curing time was shortened.MTA development is also underway.It is expected that the indications will be expanded by further improving the adhesiveness in the future.

The Ethics Committee has granted the permission (ECNG-H-41) based on the studies of the foreign countries.