Copyright: This is an open-access article distributed under the terms of the Creative Commons Attribution License, which permits unrestricted use, distribution, and reproduction in any medium, provided the original author and source are credited. Copyright © 2019; Magdalena Smyka

Aim: To evaluate the effects of gestational weight gain on perinatal outcomes in woman with excessive pre-gravid body mass index.

Material and Methods: The study group consisted of 197 overweight or obese women who delivered full-term newborns at the 1st Department of Obstetrics and Gynecology, Medical University of Warsaw. Group A included 89 (45.2%) women with inadequate or adequate weight gain. Group B included 108 patients (54.8%) with excessive weight gain during pregnancy.

Excessive weight is one of the main factors affecting general health and leading to reduction in daily activity. Nowadays, overweight and obesity have reached the epidemic level in both developed and developing countries. According to the World Health Organization the incidence of an overweight has increased trice in the last two decades. These days there are 1,6 billion overweight people and over 500 millions obese ones around the world [1]. Among pregnant women 55 % are normal weight,7% underweight and 38% obese [2]. The relation between overweight or obesity and diseases such as atherosclerosis,hypertension, heart diseases, diabetes, metabolic syndrome and musculoskeletal system disorders is well known. A relation between excessive body mass index and pregnancy complications, like gestational diabetes (GDM), pregnancy hypertension (PH) or preeclampsia (PE) is well established [3]. During delivery obese women have greater risk of injuries, cesarean section, shoulder dystocia or wound’s infections [4]. Excessive mother’s weight is a risk factor of large for gestational age infants [5]. Obese pregnant women are less likely to have a spontaneous onset of labour, so induction of labour is more common in obese pregnant woman than in normal weight ones [6]. The Institute of Medicine (IOM) recommends a gestational weight gain of 12.5-18.0 kg (28-40 Ib) for underweight woman, 11.5-16 kg (25-35 lb) for women with normal weight, 7.0-11.5 kg (15-25 lb) for overweight women, and 5.0- 9.0 kg (11-20 lb) for obese women [7]. The recommendations were developed on the basis of observational studies and the is still a need for them to be verified. The aim of this study was to evaluate the effect of gestational weight gain on perinatal outcome in women with excessive prepregnancy body mass index (BMI), who gave birth at the 1st Department of Obstetrics and Gynecology, Medical University of Warsaw.

All women in singleton pregnancies with pre-pregnancy BMI above 25 kg/m2, who gave birth ≥ 36 weeks of gestation at the 1st Department of Obstetrics and Gynecology of Warsaw Medical University in 2016 and 2017 have been subjected to retrospective analysis. The exclusion criteria were: incomplete medical data, unverified by first trimester ultrasound scan gestational age, delivery before completing 36 weeks of gestation and multiple pregnancy.

Pre-gravid weight was defined as weight before conception or <10 weeks of gestation. The patients were asked to provide their pre-gravid weight. It was verified by comparing to the weight measured by medical staff during the first trimester of pregnancy and provided in the patient’s medical records. The weight at delivery was measured with light clothing and shoes off. Height was reported by the patients themselves and verified by medical staff.BMI was calculated by dividing the body mass by the square of the body height. Normal weight was defined as BMI 18.5- 24.9, underweight as BMI less than 18.5,overweight as 25.0-29.9, and obesity as BMI 30 and greater.

The main study group was divided into two subgroups according to gestational weight gain. The first subgroup included women with adequate or inadequate weight gain during pregnancy and the second one was composed of women with excessive weight gain according to OIM recommendations [7]. In order to avoid bias related to a different weight gain in cases of preterm delivery, as weight gain is related to the duration of pregnancy, only women delivering beyond 36 gestational weeks were included in the study. The study outcomes included: occurrence of GDH, PH, PE and intrahepatic cholestasis of pregnancy (ICP), cesarean delivery, blood loss during delivery, small for gestational age (SGA), adequate for gestational age (AGA) and large or gestational age (LGA) newborns. GDM diagnosis was based on the results of the fasting 75 g oral glucose tolerance test (OGTT) performed during 24-28 gestational week in every patient. One or more elevated level was sufficient for a diagnosis of GDM: fasting plasma glucose ≥5.1 mmol/l (92 mg/dl), 1-hour plasma glucose ≥10.0 mmol/l (180 mg/dl) or 2-hour plasma glucose ≥8.5 mmol/l (153 mg/dl). PH was defined as a systolic blood pressure ≥140mmHg and/or diastolic blood pressure ≥90 mmHg in at least two measurements and diagnosed after 20 weeks of gestation. PE diagnosis is defined as PH with proteinuria (>300 mg of protein in a 24-hour urine sample) or without proteinuria but with one of the adverse organ’s conditions: evidence of kidney dysfunction (oliguria, elevated creatinine levels >1.1 mg/dl), impaired liver function (noted by liver function tests), thrombocytopenia (platelet count <100.000/microliter), pulmonary edema or cerebral or visual disturbances. ICP diagnosis was based on pruritus, elevated serum aminotransferases and bile acid levels with onset in the second or third trimester of pregnancy, and spontaneous relief of signs and symptoms within two to three weeks after delivery. AGA defined infants with birth weight between the 10th and 90th percentiles for the gestational age. Infants weighing below 10th percentiles for gestational age are defined as SGA, and the ones weighting above 90th percentiles for the gestational age are defined as LGA. Preterm delivery was defining as a labor before completing 37 weeks of gestation. Variables were described as mean (±standard deviation), median or percentage. The Mann-Whitney test (for continuous variables) and the Fischer’s exact test (for categorical values) were used for the statistical analysis. P-values <0.05 were considered significant. A relationship between gestational weight gain as continuous variable and neonatal birthweight was examined. Data were analysed using Statistica version 13.1.

Pregnancy outcomes of women from group A and B are presented in Table 2. Women with excessive weight gain had significantly more often cesarean delivery (67.6% vs 32.4%, p=0.009) and delivered newborns with higher birthweight (3627g±519 vs 3406g±521, p=0.003). Excessive weight gain was related to higher risk of having an LGA newborn, while no relationship with having an SGA infant was observed. 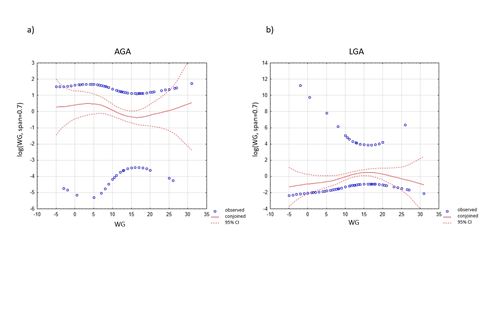 Our study confirmed that excessive weight gain during pregnancy among women with increased pre-gravid BMI is a risk factor of cesarean birth and delivering an LGA newborn. The relation between excessive weight gain and the risk of operative delivery is well established in overall population [8]. Similar finding were published in women with excessive BMI. Kiel at el. conducted a cohort study of 120,251 women and found that gestational weight gain below 15 lb (6.75 kg) was associated with lower risk of caesarean delivery [9].

Several studies confirm the higher incidence of operative delivery in women with excessive GWG. Research on Swedish pregnant women showed that intrapregnancy weight gain above the recommended by IOM levels increased the risk of emergency cesarean section in women with normal weight, overweight or obesity [10]. Excessive weight gain during pregnancy and obesity both decreased the rates of vaginal birth after cesarean one [11].

Women whose GWG is above the recommended ranges may also experience various adverse maternal outcomes, such as gestational diabetes mellitus, gestational hypertension or preeclampsia, as also other long-term consequences such as increased risk for type 2 diabetes and cardiovascular disease [7]. The abnormal BMI of women in the first trimester of pregnancy is associated with the risk of adverse perinatal outcome. Obese pregnant women are more likely to have a higher risk of preeclampsia, need of induction of labor, cesarean section, preterm delivery and LGA than the women with a normal pre-gravid BMI [12]. Flick et al. evaluated pregnancy outcomes among 20,823 obese women with excessive weight gain during pregnancy. His analysis demonstrated a greater frequency of cesarean section and LGA, but also gestational diabetes mellitus, preterm delivery and very low for gestational age [13]. Studies evaluating GWG across different classes of obesity, found insufficient weight gain or even weight loss during pregnancy associated with a decreased risk of preeclampsia, postpartum hemorrhage, instrumental, and cesarean section, and postpartum weight retention [14].

Unique in our study is the analysis of relation not only between newborn birth weight and gestational weight gain below or above recommended ranges, but also weight gain as a continuous variable. It allows to investigate the impact of maternal GWG on the prevalence of AGA infants. We found that weight gain of about 15 kg in mothers with excessive BMI is related to the highest risk of delivering LGA infants. Comparing to Kiel et al. research, the minimal risk of occurrence specific pregnancy outcomes like LGA, caesarean delivery or preeclampsia corresponded to gaining 4.5-15.5 kg (10-25 pounds) and 0-4.1 kg (0-9 pounds) for obesity class I (BMI of 30-34.9), and obesity classes II and III, respectively (BMI of 35-39.9 and BMI of 40 or greater respectively) [9]. According to IOM recommended gain weight of 5.0-9.0 kg (11-20 lb) for women with pre-pregnancy BMI more than 30, IOM do not differentiate between class I, class II, and class III obesity. Given the limited data by class, the IOM recommended weight gain of 5-9.0 kg (11-20 lb) is given for all obese women. The committee concluded that low gain or weight loss during pregnancy is not recommended for obese women because of the potential for irreversible effects on child neurologic development [7]. The risks for SGA and preterm births increased with decreasing gestational weight gain in all women [15].

The limitation of the study is a small study group from a single academic centre. Only women delivering above 36 weeks of gestation were included in the study, leaving a group of preterm deliveries out of analysis. Deliveries below 36 weeks were excluded in order to avoid bias related to a difference in weight gain in different durations of pregnancies. However, the analyzed period of deliveries above 36 weeks may still have a significant impact on gestational weight gain.

Another recommendation for weight gain during pregnancy were proposed by Bracero and Byrne [16]. The analysis of 20,971 pregnant women who deliver between 1987 and 1993 at a single institution in New York City showed that for overweight or obese women a gain of 26-30 pounds (11-13 kg) was associated with optimal outcome. According to DeVader the ideal gestational weight gain for population of normal weight women was 11.4-15.5 kg (25-34 pounds) [17]. Finally, Norh et al. analysis over 60 000 pregnant women indicates that greater weight gains (more than 16 kg) and high pre-gravid maternal BMI decreased the risk of growth restriction and increased the risk of the infant's being born large-for-gestational-age or with a low Apgar score. Generally, low GWG was advantageous for the mother, but it increased the risk of having a small baby, particularly for underweight women [18].

Excessive GWG affects the course of pregnancy and it is correlated with perinatal outcomes. It seems crucial to pay attention to reaching normal weight in pre-pregnancy period and gaining recommended weight according to pre-gravid BMI.