Copyright: This is an open-access article distributed under the terms of the Creative Commons Attribution License, which permits unrestricted use, distribution, and reproduction in any medium, provided the original author and source are credited. Copyright © 2019; Swati Agrawal

Twin pregnancy with one live fetus and one complete mole, also known as CMCF i.e. complete molar pregnancy with coexisting live fetus is a rare entity in obstetrics. This combination is associated with increased incidences of spontaneous abortions, vaginal bleeding, prematurity, intrauterine demise, pre-eclampsia, uterine ruptures, theca lutein cysts, persistent gestational trophoblastic disease. We report a rare case of a 24-year-old patient with CMCF at 14 weeks of gestation. After confirming the diagnosis, ruling out malignancy and proper counselling, decision was taken to continue her pregnancy. However, the patient had spontaneous abortion at 15 weeks of gestation. Her serum beta Hcg has shown a decreasing trend in her follow up visits with no signs suggestive of persistent gestational trophoblastic disease.

CMCF, one complete mole and other normal coexisting fetus, is an infrequent occurrence with an incidence of 1 in 22,000 to 1 in 1,00,000 pregnancies [1]. Diagnosing this condition is challenging and requires high level of suspicion as it can be confused with partial mole which consists of molar tissue with a fetal pole. Invasive testing and karyotyping may be required to make a definitive diagnosis. However, with good imaging in expert hands, the diagnosis may be made on ultrasound itself. These cases are at a high risk of multitudinous problems, including persistent gestational trophoblastic disease, which require close follow up post-delivery.

A 24-year-old patient G4P0A3L0 presented in the emergency of Lady Hardinge Medical College, New Delhi at gestational age of 14 weeks 2 days with complaint of heavy vaginal bleeding for last one and a half month. Her menstrual history was normal with regular cycles. She had history of two spontaneous and one missed abortion at 2 months of gestational age. All these were spontaneous conceptions, but the present pregnancy followed ovulation induction by letrozole. She was diagnosed as a case of hypothyroidism and was put on treatment for last 7 months. On examination, general condition of the patient was satisfactory, her vital were stable and she was moderately anaemic. On per abdominal examination, uterus was 24 weeks in size, non-tense and non-tender. Fetal parts were not palpable and fetal heart sound was not audible. On per speculum examination, cervical os was closed and no bleeding or leaking per vaginum was seen. On per vaginal examination, cervical os was closed, uneffaced, soft in consistency and lying posterior. Her baseline investigations were, haemoglobin 8.3gm%, platelet counts 1.59 lakhs, prothrombin time/ activated partial thromboplastin time/ international normalised ratio were 11.5/28.05/0.95 respectively, liver and kidney function tests were within normal limits, serum TSH was 0.075mili IU/L (0.4-5m IU/l) and baseline serum beta Hcg was 1057546mIU/ml (<5m IU/l). Chest x-ray was done with abdominal shied and was within normal limits and obstetrics ultrasound were suggestive of a twin pregnancy, with dividing membrane seen. Twin A was single live fetus of 14 weeks 3 days with posterior placenta. There was an echogenic area with multiple cystic spaces within, showing no internal vascularity predominantly on lower uterine segment measuring 12x9x8 cm with no obvious myometrial invasion. Also, a note was made of a sub chorionic hematoma of 4.3x2.8x2 cm in the lower uterine segment, covering internal os. Bilateral adnexae were clear. Henceforth, the diagnosis of twin gestation with one mole and one normal twin with subchorionic hematoma was made with no signs of metastasis. The patient and the relatives were explained the high risk of spontaneous abortion, intrauterine death, preterm labour and excessive vaginal bleeding and were given the choice between termination and continuation of pregnancy. After proper counselling of the couple and written and informed consents, it was decided to put the patient on conservative management. After approximately a week after the presentation, patient again started having bleeding per vaginum with pain lower abdomen and spontaneously aborted in the 16th week of her pregnancy as in figure 1. The weight of the normal fetus and the placenta was 40 grams and 10 grams respectively and the weight of molar tissue was 108 gm. One unit of packed cell volume was transfused post-delivery. Histopathology report was suggestive of one normal placenta and other as hydatiform mole without evidence of choriocarcinoma. Patient was discharged in stable condition after appropriate contraceptive counselling and with the advice to follow up with serial beta Hcg.

The occurrence of CMCF which is one complete mole and one fetus is a rarity. The aetiology of CMCF is not known, but is usually seen in pregnancies after ovulation induction [1,2]. Until recent times, the diagnosis of CMCF was usually made retrospectively and thus the exact knowledge of the natural course of these pregnancies were lacking. Usually the diagnosis is clinical and ultrasound based and between 12-14 weeks it can be easily detected [1]. MRI is another modality which can help in confirming diagnosis [3]. When partial mole is present, termination of the pregnancy is a rule, but continuation of pregnancy is possible in presence of complete mole with other normal fetus in a twin pregnancy. CMCF pregnancies are associated with increased risk of spontaneous abortions, vaginal bleeding, prematurity, intrauterine demise, pre-eclampsia, uterine ruptures, theca lutein cysts and persistent gestational trophoblastic disease [1,2]. The increased association of these pregnancies with vaginal bleeding is due to implantation of molar pregnancies in lower uterine segment [4]. Among the various complications mentioned, persistent gestational trophoblastic disease is commonest and most severe with incidence ranging from 5-33% [1,2]. In most cases it can be managed by mono-chemotherapy [1].

Figure 1: Normal fetus with placenta on left side and molar tissue on right side of the image. 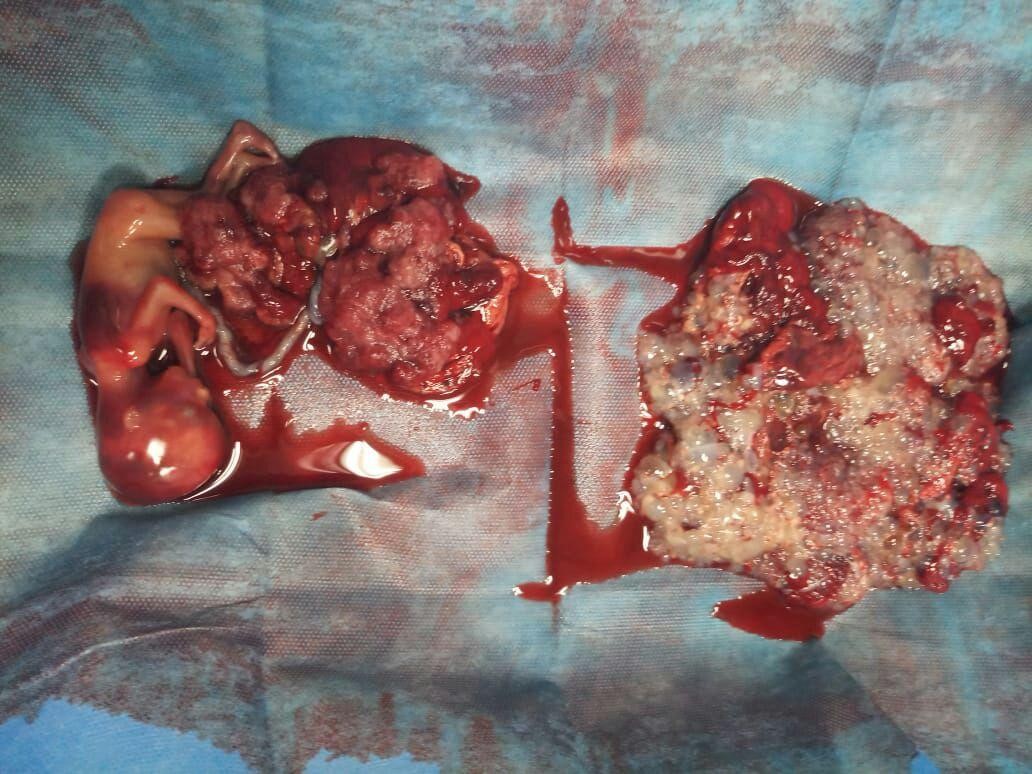 The overall likelihood of a live birth rate is between 16-56%.1,2Sebire et al did a retrospective study including seventy-seven cases of CMCF pregnancies. They reported termination of pregnancy before 14 weeks in 10 cases, between 15-22 weeks in 5 cases, two were terminated before 24 weeks of gestation owing to early onset of pre-eclampsia, 23 cases had spontaneous abortions and intra uterine demise before 24 weeks and 28 patients delivered at or after 24 weeks. Live birth rate in this study was 38%. Persistent gestational trophoblastic disease was seen in 15 cases. 11 out of these 15 patients were cured with mono chemotherapy [5].

A.Fries et al, reported a case of CMCF in a 33 year old patient who was diagnosed in 15th week of pregnancy. The ultrasound was suggestive of one eutrophic fetus of 14 weeks 2 days with a normal placenta and other 60x32 mm honeycomb like structure suggestive of complete mole. After proper counselling, the couple agreed to continue with the pregnancy and delivered at 32 weeks of gestation when massive ante partum haemorrhage lead to emergency caesarean section [6]. In doubtful cases of CMCF, the first step is identification of karyotype of the fetus to differentiate from partial mole. In cases of detection of diploid karyotype pregnancy is continued with appropriate couple counselling and terminated if triploid karyotype is detected. In cases of CMCF pregnancies, the couple should be informed that the live birth rate is approximately one third and there are high risks of complications including persistent trophoblastic disease. Even these cases mandate close follow up postnatally with beta Hcg and should be informed to the couple, so that they are able to make the unsurpassed decision.

Twin pregnancy with CMCF is a rare event in obstetric practice. Clinical knowledge and experience in dealing with such pregnancy is meagre. It makes management of such cases difficult, owing to the presence of multiple associated obstetrics and non-obstetrics complications. Continuations of such pregnancies require proper counselling of the couple explaining all plausible paths. If a decision is made to continue the pregnancy, the patient should be managed by an experienced obstetrician with a well-equipped centre to deal with the complications arising not only in the antenatal period but also postnatally.