Impact of white poisons in Management of Women with Pcos

Copyright: This is an open-access article distributed under the terms of the Creative Commons Attribution License, which permits unrestricted use, distribution, and reproduction in any medium, provided the original author and source are credited. Copyright © 2019; Prapurna Chandra Y

Introduction: The Poly Cystic Ovaries Syndrome is considered to be most prevalent of all endocrine disorders which women face. It is the leading cause of Infertility in women of child bearing age. The purpose of our study was tocollect data on how many women had symptoms of this syndrome including hirsutism, amenorrhoea, dysmenorrhoea and oligomenorrhoea. Furthermore what was the ratio of women who were aware of this disorder was evaluated.

Methods: Data was collected from Eighty eight women who were either seeking or imparting education in Rao’s college of pharmacy. A small portion of our subjects were educated house wives. Subjects were inquired through survey forms of above mentioned symptoms.

Discussion: The results show that the level of awareness about dietary white poisons in the study population is very low, even in the participants who are literates, in this study we concluded that dietary white poisons may play essential role in management of weight loss, and helps to reduce the symptoms which is very common in the PCOS. We have also observed that by avoiding & replacing the white poisons such as refined rice, wheat, high sugar and salts and pasteurized milk, helps to regulate the biochemical hormones like Androgen and Progesterone which, abnormalities are very common in the PCOS. Hence we conclude that management of diet helps in the management of PCOS in the study population.

Now a day’s PCOS is perceived to be a metabolic disorder [3] and It is discriminated by prolonged anovulation, hyper-androgenism, infertility and often Women with this syndrome have been noticed to be hyperinsulinemic [4]. Currently Rolterdam criteria is preferred for diagnosing PCOS which states that for determining the PCOS with the accompanying signs such as anovulation/oligo ovulation, hyper-androgenemia and appearance of polycystic ovaries on ultrasound [5].

PCOS is a heterogenic disorder with intermediate aetiology and is described by androgen excess and polycystic ovaries. Ovulatory dysfunction is the most important clinical aspect observed in PCOS [6]. It is considered as a multi-organ disorder as it can impact adrenal and sex hormones along with ACTH gonadotropins and development hormone [7].

Patients with PCOS are at risk of diabetes mellitus as they suffer from insulin resistance besides the symptoms of abdominal obesity in addition to increase secretion of interleukins, chemokines and adipokines (because of body’s inflammatory state) [10]. The hallmark of this disease can be described into clinical, endocrine and metabolic. The clinical features are abnormal menstrual, acne, hirsutism, alopecia, anovulation, infertility and miscarriages. The endocrine features are increased levels of androgens leutinizing hormone and prolactin. The metabolic perspective of this disorder is insulin resistance, obesity, lipid abnormalities and as increased risk of impaired glucose tolerance which can lead to Type 2 Diabetes. And further more hazard for cardiovascular disease and endometrial carcinoma [11,12].

Life style interventions are the first-line treatment for PCOS, especially when it is accompanied by obesity. This suggested priority is based on the fact that reduction of central fat ameliorates the PCOS phenotypes, inter alia improved cyclicity and resumption of ovulation [13]. Also, weight loss improves the status of cardiovascular risk factors accompanied by a decreased intima media thickness [14].

According to the literature, dietary management is the primary choice to treat the PCOS and many studies described that increased intake of five white poisons such as pasteurized milk, refinedsalt, refinedrice, refinedsugar, and white flour.

The process of pasteurization keeps the milk good for a longer period but harms its nutritive value. It removes enzymes, vit-A, B12 and C beneficial bacteria &calcium. Calcium works with vit-D which is vital to growth &health of children as well as improving immune system. Considering all these facts we should avoid consuming pasteurised milk.

Salt makes body hold on to water if you eat too much salt. The extra water stored in your body increase your B.P.

The process of refining rice beats to the removal of outer layer, germ &endosperm only these layers contains starch in huge quantity which can increase blood sugar to a great extent.

Refined sugar can cause insulin resistance, a stepping stone towards metabolic syndrome & diabetes. Insulin is a very important hormone in the body. It allows glucose to enter cells from the blood stream &tells the cell start burning glucose instead of fats.

Maida Known as white poison. We are consuming it in the form of bread at our home and market or food joints in the form of fast food. During processing of maida from wheat endosperm, germ and bran and nutrients are removed, which is very crucial for digestion. As a result, our body get depleted of vitamins &minerals. High intake of the above said white poisons in diet leads to Obesity, Diabetes, Hormonal imbalance, Cancer [15].

Obesity is a common finding in PCOS and aggrevates many of its reproductive and metabolic features. The relationship between PCOS and obesity is complex, not well understood and most likely involves interaction of genetic and environmental factors [16]. In this study we aimed to evaluate the effect of dietary white poisons in women with PCOS and to evaluate the knowledge of women about diet and obesity.

Women with PCOS had a greater risk of overweight, obesity and central obesity although our findings support a positive association between obesity and PCOS, our conclusion are limited by the significant heterogeneity between studies and further studies are now required to determine the sources of these heterogeneity. Clinical management of PCOS should include the prevention and management of overweight and obesity [17].

The Metaanalysis showed a twofold risk of arterial disease for patients with pcos in respect to women without pcos. BMI modification did not impact these findings, suggesting the expanded hazard for cardiovascular event in the pcos isn’t totally identified with higher BMI in patients with pcos [19].

• To study and evaluate the effect of dietary white poisons in women with pcos.

• To evaluate the knowledge of women about diet and obesity.

• To evaluate the effect of patient counselling in study population

This study was conducted in Nellore which is a city of India, a country situated in South Asia [20]. This research study was approved by Institutional Ethics Committee of RaosCollege of Pharmacy, Nellore. In this study, 88 female, Pre-Menopausal women with PCOS were recruited into the study. All subjects were given informed consent before participating in the study. Participants who were diagnosed of PCOS, according to the Rotterdam consensus by two of the following three criteria 1) Menstrual irregularity (cycle length < 26 days or > 31 days).2) Clinical (Hirsutism or biochemical hyper androgenize (free androgen index >5.4 or testosterone >1.4 mmol/L.3) Pasitive ultrasound presentation of PCOS by trans vaginal smear. Women with pregnancy, breast feeding and those who are in use of oral contraceptives and hormonal treatment, those who are using insulin sensitizing agents are excluded from the study.

1) What are the primary reasons for consultation check those that apply?

Infertility Relieve symptoms of PCOS others

2) Do you have any other significant medical history such as high B.P, Diabetic, Thyroid etc.?

3) If you are diabetic. Are you insulin resistant?

4) What are your symptoms?

5) What medications are you on and how long have you been on them for?

7) Are you exercising on a regular basis? If so, please describe what activity, how many times a week & for how long?

8) If you are not exercising, why not?

9) Do your family members (parents, siblings) have weight problems?

10) Give an idea of what kind of diets you have tired (low fat, low carbohydrates etc.)

11) Did you have success with diet?

12) Where do you feel that some of your problem’s areas might be? Check all those that apply?

13) Please check off which of the following foods you would eat?

15) I crave carbohydrates and sugars

16) I have always had difficulty with losing weight?

17) I have or had problems in the past acne

19) My periods are unpredictable

20) My periods last longer than a week

21) My periods are very heavy or prolonged

22) I have with excessive facial hair

23) I have symptoms of hypoglycemia

25) I have a family history of diabetes

26) I have noticed skin color or pigmentation changes

27) I have history of high blood pressure

28) I have difficulties getting pregnancy

30) My acne is worse at different times of my cycle

1. Are you on regular periods after changing the diet?

2. Has your androgen levels are normal?

3. Have you seen changes in your symptoms after changing diet and starting exercise?

4. Have you been working out every day for about an hour?

5. Please choose, which type of food did you cut down/out from your diet?

6. Comment how did you replaced above said white poisons in your diet?

7. Do you think that the lifestyle changes have reduced your PCOS symptoms?

If Yes, please mention choose, what type of modification did you practiced.

8. Are your insulin level are in normal values date when last test performed?

9. Are your thyroid level in normal values date when last test performed?

10. Have your hirsutism is reduced?

11. Have your acne is reduced?

12. Has your PMS symptoms are relieved like back pain, stomach ache, etc.

13. Are your Progesterone and estrogen are in normal level?

14. Are you taking Fibers daily that promotes estrogen metabolism. check out Fibers

15.what has helped you in dealing with PCOS? 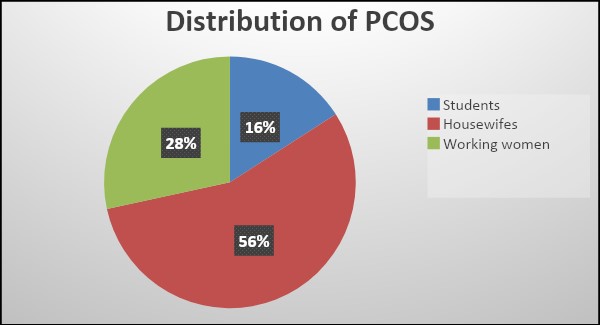 Figure1: Distribution of PCOS in women. 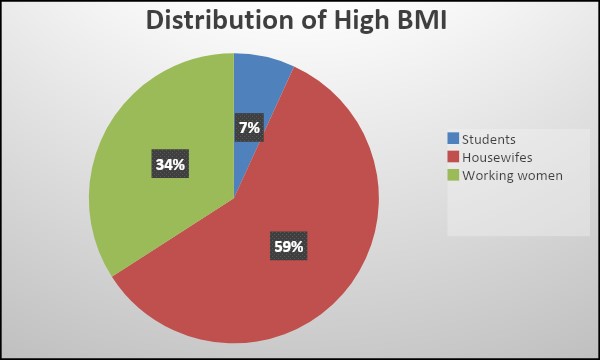 According to the questionnaire 45 participants are consuming dietary white poisons daily, which is 51.13 % of the whole population.

The major common symptoms were observed in the study participants is Acne, Hirsutism and Irregular periods, and incidence of these symptoms are given in Table 3.

Pre –intervention bio chemical hormones such as Androgen and Progesterone was estimated and observed as abnormal levels in majority of the study participants i.e.,89.7 %, results are depicted in table 4.

After post study intervention High BMI population are reduced to from 50 % to 36.3% due to modification in diet, as depicted in table 5.

Table 6, described that post study symptomology of the study population, and also observed reduced incidence of symptoms compared to pre-study. 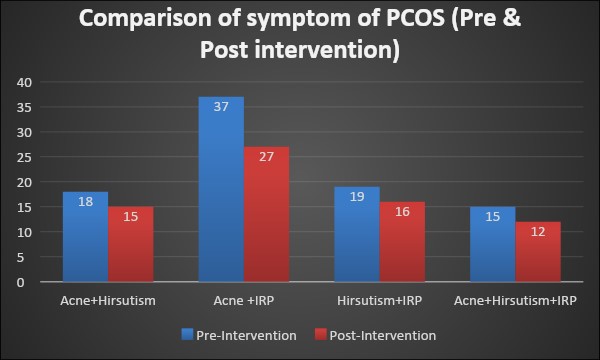 Post –intervention of bio chemical hormones was also estimated and observed significant reduction in the levels of androgen and Progesterone as shown in figure 4. 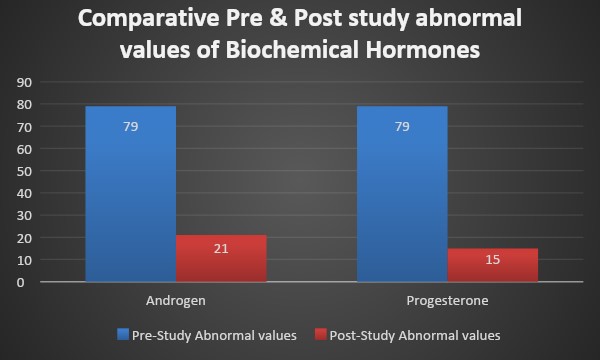 On the whole 79(89.7%) out of total 88 women reported that they have abnormal levels of androgen and progesterone levels. Weight loss among overweight women has been shown to improve reproductive outcomes by reducing sugar intake [21]. Clark et al. found that even a small weight loss in an ovulatory obese infertile women resulted in improvement in ovulation, pregnancy rate and outcome [22].

The results show that the level of awareness about dietary white poisons in the study population is very low, even in the participants who are literates, in this study we concluded that dietary white poisons may play essential role in management of weight loss, and helps to reduce the symptoms which are very common in the PCOS. We have also observed that by avoiding & replacing the white poisons such as refined rice, wheat, high sugar and salts and pasteurized milk, helps to regulate the biochemical hormones like Androgen and Progesterone which, abnormalities are very common in the PCOS. Hence, we conclude that management of diet helps in the management of PCOS in the study population.

We would like to avail this opportunity to express deep sense of gratitude and heartfelt thanks to our revered guide Mr.Prapurna Chandra.Y.M.Pharm Ph.D department of pharmacology, Raos college of pharmacy, Nellore, for his unflinching support, valuable suggestions and for sharing his experience with us during the entire course.