A rare case of ovarian Actinomycosis in an 8-year-old girl. A case reports

Copyright: This is an open-access article distributed under the terms of the Creative Commons Attribution License, which permits unrestricted use, distribution, and reproduction in any medium, provided the original author and source are credited. Copyright © 2022; Niang D

Anaerobic, nonsporulating, Gram-positive bacteria groups called actinomyces organisms are responsible for the so called actinomycosis. This chronic disease is rare in children and has tendency to mimic many other diseases. It also has wide variety of manifestations and non-specific symptoms. As a result, it is difficult to diagnose before the biopsy and microscopic examination. Although infection may involve any organ in the body, the significant sites of actinomyces infection include cervicofacial, abdominal, pelvic and pulmonary tissues. Case report: Here, we describe one case of unusual presentation; an 8-year-old girl with an ovarian mass which was finally diagnosed actinomycosis based on the pathological findings. Conclusions: Actinomycosis may rarely present with ovarian mass in young girls. Keywords: Actinomyces, Ovarian actinomycosis, Child, Microscopic Examination.

Actinomycosis is a chronic suppurative disease caused by a gram-positive bacillus, actinomyces Israeli. This type of Actinomyces is commensal of the oropharynx, gastrointestinal tract or urogenital tract. The most frequent attacks are found in the cervical-facial, thoracic, abdominopelvic regions and the central nervous system [1]. Pediatric actinomycosis is rare, representing less than 3% of all cases of actinomycosis and 50-60% of these cases occur at the cervical-facial level [2]. In a review of 85 cases of actinomycosis, 27% of them were younger than 20 years of age, and 7% were younger than 10 years old [1]. Endogenous flora is almost always the source of human infections. Risk factors in children include local tissue damage caused by trauma, recent surgery (splenectomy) or irradiation, renal or/and lung transplants, alcoholism, use of steroids, HIV, diabetes and leukemia with chemotherapy [2]. Gram staining of pus of infected tissue is usually more sensitive than culture; therefore, it is most commonly used for the diagnosis of actinomyces. After the invasion of actinomyces species to the tissues, they develop a chronic granulomatous inflammation characterized by the formation of tiny clumps with yellow colors, called Sulphur granules. These formations have the diameter of about 0.1 to 1mm and are composed of internal tangle of filaments about 1micrometer in diameter and a rosette of peripheral clubs. They are stabilized by a protein-polysaccharide complex that provides a resistance mechanism to host defenses by inhibiting phagocytosis [3,4]. Necrosis and yellowish Sulphur granules as well as filamentous gram positive like fungal pathogens are usual finding in microscopic assessment. Aggregation of bacteria trapped in biofilm formed yellowish Sulphur [5]. These microorganisms are not virulent; therefore, mucosal disruption facilitates invasion of actinomyces. The actinomyces has the capacity to invade surrounding tissues and form masses; hence, it is characterized by a tendency to mimic malignancy. Ovarian location of actinomycosis is poorly described. We describe a case diagnosed in an 8-year-old girl with an ovarian location.

The patient was 8 years old. She was growing normally, vaccinated and with no particular known medical history since birth. The disease had been evolving for a month. It would have started with fever, weight loss and the appearance of a progressively increasing hypogastric mass that motivated repeated consultations and outpatient treatment without improvement. Clinically, the physical examination revealed a deterioration in general condition classified as WHO II, pallor of the mucous membranes, a weight of 18 kg (3 times lower than the normal weight). The temperature was 38.5°, the heart rate 100 beats per minute and the respiratory rate 30 cycles per minute. The patient was thin with pale mucous membranes. The hypogastrium was distended, seat of a fixed mass, firm, painful on palpation. The facing skin was healthy with no collateral circulation. The gynecological examination was unremarkable. A check-up was carried out and showed: hypochromic microcytic anemia with a hemoglobin level of 8.2 g/dl and a MCV of 75 fL. CRP was elevated at 48 mg/l without hyperleukocytosis or hyper eosinophilia. Blood sugar was normal and retroviral serology was negative. From the radiological point of view, an abdominopelvic ultrasound was performed first. His interpretation was difficult. She evoked a probable multi-partitioned right ovarian tumor measuring 70 x 63 mm and a reaction-type pelvic peritoneal effusion. Secondly, an abdomin-pelvic scan was also performed (Figure 1). It revealed 3 well limited fluid formations without details with a doubt about the presence of a right ovarian tumor. Otherwise, the abdominal organs were normal as well as the chest X-ray. 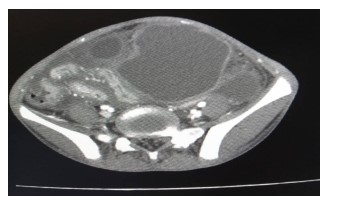 Faced with this clinical picture, an indication for an exploratory laparotomy by a transverse mid-abdominal incision was made. At the opening, the viscera were attached adherent. After dissection of the loops, 3 lesion foci were found. A purulent median collection was attached to the posterior face of the uterine dome. The right ovary was distended, its surface was irregular, necrotic and purulent. The left ovary presented a cystic formation with a translucent wall. The drainage material from the purulent collection was removed and sent to bacteriology. The right oophorectomy and left ovarian cystectomy specimens were sent to the pathology laboratory. The drainage fluid was sterile on bacteriological examination. Histologically, the ovary measured 3.6 x 2 x 1 cm with a rough and nodular surface. The cut planes were fleshy whitish with more or less well-defined yellowish foci (Figures 2a et 2b).

Figure 2a: On the left of the photomicrograph, an abscess centered by eosinophilic grains of actinomycosis (G X 40 / HE) can be seen. On the right we see the residual ovarian parenchyma made up of primordial follicles.

Figure 2b: Polycyclic actinomyces grains surrounded by neutrophils (HE /GX400).

The entire sample was embedded in 8 paraffin blocks and examined with standard hematoxylin eosin staining. In the center of the ovarian parenchyma there were micro abscesses centered by rounded or polycyclic eosinophilic filamentous bodies. These bodies were surrounded by numerous neutrophils. On the periphery, there was a residual ovarian stroma, comprising primordial and primary follicles. The surface of the ovary was inflammatory. These histopathological aspects were suggestive of actinomycosis confirmed by special complementary stains, in particular PAS and Gram, which were positive (Figure 3).

The left ovarian cystic formation measured 5 x 3 x 2.7 cm unilocular and with greenish and viscous contents. On histology, it was a de-epithelialized wall lined with inflammatory elements. Following the diagnosis, the patient was put on penicillin A treatment by injection 100mg/kg in 3 doses per day and cotrimoxazole at 100mg/kg per day. The evolution is slowly favorable.

Actinomycosis is a rare condition, described since 1876 by Israel and Wolf (2). It has a wide geographical distribution with an incidence estimated between 1/19,000 and 1/400,000. The main pathogenic species is A. israelii, a Gram-positive bacillus, anaerobic, filamentous, saprophytic of the oral, digestive and especially genital cavities in women. It becomes pathogenic following a breach of the mucosal barrier: contusion, trauma or surgery with local dissemination. After invasion, single or multiple abscesses will form, progressively evolving towards induration and fibrosis. Actinomycosis is a rare condition in children representing less than 3% of cases. The cervicofacial localization is predominant (50-60%), the thorax and the neck (15-20%) and abdominal (20-22% [6-7]. The ovarian involvement that we describe in this observation remains little known. in children. It is more often found in young adult women carrying an intrauterine device. Even in the latter, the tube-ovarian form is also rare, dominated by the more frequent uterine location. About fifty cases have been reported in the eruption of the uterine mucosa is thought to be induced by the intrauterine device or secondary to trauma during insertion or removal [8-9]. The diagnosis of actinomycosis is difficult before the period of parietal extension with cutaneous fistulation and the characteristic granular and yellowish discharge. This situation is due, among other things, to the rarity of visceral actinomycosis, especially in children. A positive culture in the laboratory to highlight the germ is the key to diagnosis but it can be difficult in the clinical setting, moreover for our study, the bacteriological examination was negative. Cultivation of Actinomycetes requires freshly obtained specimens, a specific anaerobic transport medium and a long growth period. Studies have reported positive cultures ranging from 23% to 60% [10]. On the other hand, histological examination is easy and makes it easier to confirm the diagnosis. Macroscopic examination may sometimes show yellowish granulations within purulent tissue. The histological study reveals a granuloma centered by an abscess where the colonies of actinomycetes are found, often associated with other bacteria. As described in our observation, they are classically arranged in clearly visible grains on hematoxylin eosin, and are strongly stained by Gram, Groot and PAS. The grains are of variable size, bordered by filaments of irregular length but with a diameter of less than 1 micron. Molecular biology, if available, makes it possible to arrive at a definitive diagnosis with the typing of Actinomycetes using the PCR (polymerase chain reaction) technique. This technique is based on the sequencing of 16S ribosomal DNA, even from samples fixed in formalin and embedded in paraffin. [3]. Therapeutically, in front of the pseudotumor form presented by our patient, the management was first surgical with a laparotomy, drainage of the abscesses, an adnexectomy and a cystectomy. Additional antibiotic therapy is necessary. Indeed, actinomycosis are sensitive to most current antibiotics. We will first choose penicillins at high doses [10 to 20 million IU / day in attack treatment and for 2 to 3 weeks relayed by a maintenance dose for several months [4] associated with anti-anaerobic antibiotics. Other antibiotics can be used as first-line treatment, such as group A penicillin’s, which our patient benefited from. The evolution is slow but favorable (4 11 12).

Actinomycosis is rare in children, and the ovarian form is poorly described. The particularity of our observation lies in the unusual ovarian localization of actinomycosis and in its pseudo-tumor clinical presentation. The anatomopathological examination, based on the yellowish appearance of the grains and the positivity of the special PAS and GRAM stains, is of great diagnostic value since the bacteriological culture is often negative. Conflict of interest: There was no conflict of interest.