Welcome to Open Journal of Nursing and Medical Care

Copyright: This is an open-access article distributed under the terms of the Creative Commons Attribution License, which permits unrestricted use, distribution, and reproduction in any medium, provided the original author and source are credited. Copyright © 2019; Sergiu Teodorescu

Type II diabetes is a pathology commonly found in the world, with increasing morbidity (we could say an epidemical one). Diabetes mellitus is a chronic condition characterized by increased blood glucose levels, associated with increased risk for various diseases and severe complications. Manifested by polydipsia, polyuria and polyphagia. Diabetes mellitus type 2 is characterized by decreased tissue permeability for insulin, appearing usually after the age of 40 years (being called "the elderly diabetes"), being incriminated in appearance, improper nutrition (high fat), obesity and physical inactivity.

The current treatment of type 2 diabetes

1. The literature highlighted the importance of the interdisciplinary team. So, are described, as components of this treatment

• Physical activity - by its two results: glucose consumption (as a quick source of metabolic energy generation) and improvement of the permeability of the tissue to insulin

• Activities of care (nursing) – specific measures of the nursing profession, achieving decreased incidence of complications of this disease.

2. Actually, a person suffering from type 2 diabetes is treated just by one person: the diabetologist. He recommends drug therapy, non-personalized diet and a lifestyle change (from a sedentary to an active one).

The study was developed between 01.02.2019 - 31.08.2019, in "St. Pantelimon" Emergency Clinical Hospital, Bucharest, Romania and was performed by an interdisciplinary team, consisting of 2 nurses, 1 endocrinologist, 1 gastroenterologist and 1 physiotherapist. The team was led by Sergiu Teodorescu, licensed registered nurse. The study group consisted of 10 patients and the control group as well as 10 patients, men between the ages of 40-60 years, with type 2 diabetes discovered during the last 2 years, without others major pathologies.

The study was developed in compliance with the principles of ethics and deontology, based on the following acts

• Law no. 206/2004 from Romania, regarding ethical conduct in scientific research, technological development and innovation.

• The Code of ethics and deontology of the “St. Pantelimon” Emergency Clinical Hospital, Bucharest, Romania.

• Informed consent of the subjects under study.

The use of an individualized exercise program, doubled by a sustained diet, determines the blood glucose level regulation.

The subjects of this study were diagnosed, during 2017-2019, with type 2 diabetes. The subjects have had an unhealthy living style: sedentary, with an unhealthy diet (quality, quantity and nutrition program), ailing of occupational stress.

Recommendations received from the diabetologist were:

• Diet (printed regime, used by all the patients with type 2 diabetes).

• The first control after 1 month, the second after 3 months and third one after six months.

Starting by 01/02/2019, the subjects were helped to transform the "physical activity" recommendation in to a physiotherapy recovery program, adapted for type 2 diabetes.

Thus, following the instructions on diet and those related to medication, they kept the following physiotherapy recovery program:

• For elbows joints: forearm rotation in the frontal plane in both directions. A series has 10 cycles of movement.

• For shoulders joints: upper limb circumduction in both directions; arms extension (stretched sideways) with flexed forearms, then the extension. A series has 10 cycles of movement.

• For lumbar spine joints: flexion - extension lateral trunk; torso half rotation, in longitudinal axis (left - right); torso rotations, in the transverse plane; torso forced ahead flexion (touching the ground with the hands, keeping the knees straight). A series has 5 cycles of movement.

• For legs "sole calender" (flexion - extension of the soles, rising on toes, descending on heels). A series has 10 cycles of movement.

• Crunches - a series has 10 cycles of movement.

• Squats - a series has 5 cycles of movements.

• Pushups - a series has 5 cycles of movements.

• 5 kg dumbbells: flexion - forearms extensions, in the sagittal plane; forearm flexion - extension, with the dumbbells on shoulders, up - down, in the longitudinal axis; upper limbs abduction - adduction, with extended elbows, until a 90° angle. A series has 10 cycles of movement.

About the medical treatment, the first daily dose reduction was recommended by the diabetologist, who said that this is the minimum dose, the subject following to remain with 1 g of Metformin hydrochloride / day for the rest of his life (where the diseases evolution remaining favorable). Further, the drugs doses reduction until suspending, was made against to the diabetologist prescription.

The diabetologist has recommended "physical activity", without any explanations. 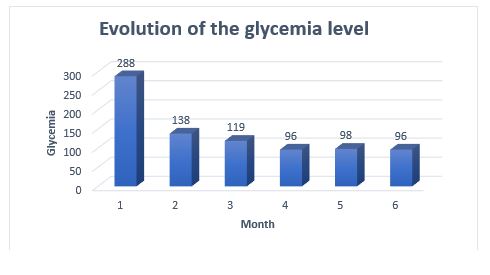 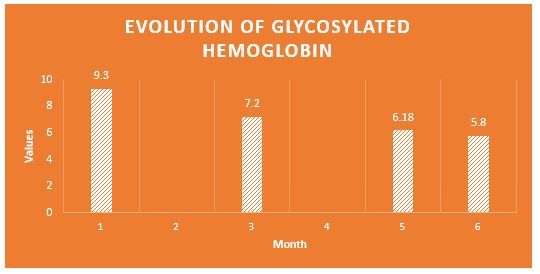 Should be noted the body shaping effect of this program (obtained as a side effect of the proposed one). So, the subjects medium body weight, during the study, it is as follows: 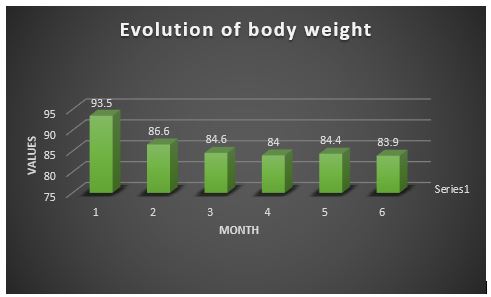 1. Using a physiotherapy recovery program, the subjects have renounced, safe, diabetes mellitus type 2 medication. Should be emphasized that this kind of medication is essential in the acute phase of this pathology, to regulate glycemia levels within acceptable limits. Also, a great importance has the diet, without which it could not get any positive results. The psychotherapy and the nursing are very important for lifestyle changes. For prevention and treatment of complications that can occur this condition, they are specialists for treating them.

2. Should be emphasized the general context: following the recommendations of the interdisciplinary team, the subjects obtained the expected results of this study.

3. Physical therapy proved to be a complementary therapy (initial phase) and an alternative therapy (in the second phase of the study), to the classic medicine.

4. Such physiotherapy recovery can be used to develop additional and / or alternative therapy programs for some other pathologies.

5. Using the recovery program, according to Table 1 and Table 2, the evolution of blood sugar, glycosylated hemoglobin and body mass was favorable. Their values decreased to values accepted as normal (see Table 3, Figure 1, Figure 2 and Figure 3).