Copyright: This is an open-access article distributed under the terms of the Creative Commons Attribution License, which permits unrestricted use, distribution, and reproduction in any medium, provided the original author and source are credited. Copyright © 2020; Hammouda Y

The lobular capillary hemangioma is lesion of vascular nature, benign, polypoid appearance, unique and of unknown origin. It usually occurs at any age, without predominance of sex. The clinical development of these lesions is slow, the most frequently observed symptoms are epistaxis and nasal obstruction. Histopathological examination is necessary to confirm the diagnosis. We report a case of lobular capillary hemangioma of the nasal vestibule in a 43-year-old male patient.

Lobular capillary hemangioma is a common, benign, acquired vascular neoplasm of cutaneous or mucosal laceration of the oral and nasal cavity, as well as other sites. However, it rarely occurs in the nasal vestibule. LCH has a predilection for children and young adults [1]. The pathogenesis of LCH is still not known [2]. Clinical development of such lesions is slow, but it may alsotend to evolve rapidly. Clinical manifestations are dominated by epistaxis and nasal obstruction. Capillary hemangioma presents as a small, localized lesion with less aggressive clinical behavior [3]. The treatment of choice is complete surgical excision followed or not by electrocoagulation [4]. Histopathologic examination will reveal thetrue nature of the lesion. Surgical excision is the treatment of choice.

A 43-year-old man came to our ENT department with complaints of episodes of intermittent epistaxis from a mass in his left nostril that had started 8 months earlier and had grown rapidly, obstructing the left nostril. Rhinoscopic examination showed a 2 x 2 cm pedunculated lesion, which developed from the floor of the left nasal vestibule via a pedicle.

The postnasal space was normal, no other masses were observed in the nasal cavity. On palpation, the lesion was painless, firm, tender, mobile (Figure 1). The rest of the ENT exam was normal. 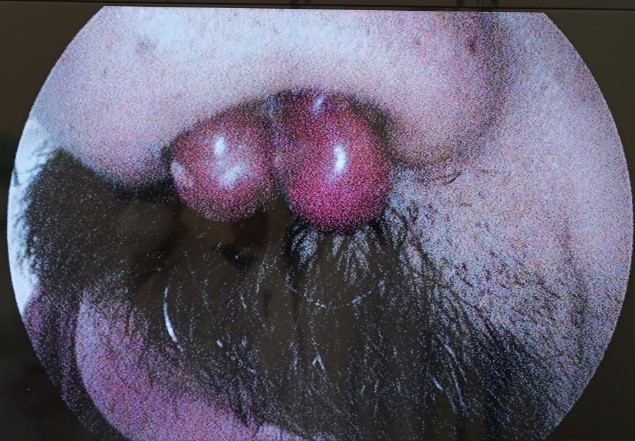 Nose and paranasal sinus computed tomography demonstrated that themass was arising from thefloor of the left nasal cavity, extends through the nasal vestibule, intensely enhancedand measuring approximatively 21×19mm. Without any sinus invasion or bone destruction (Figure 2). 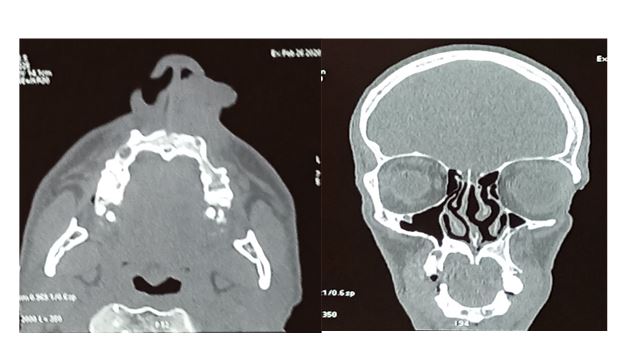 Figure 2: The coronal (A) and axial section CT scan shows an intenselyincreased mass siageinginto the nasal vestibule of the right nasal cavity.

The mass was excised completely by an endoscopic endonasal approach. No complications occurred during or after the surgery. Histological examination of the mass show a characteristic polypoid, circumscribed, exophytic lobular proliferation of capillaries in a fibromyxoid stroma (Figure 3). 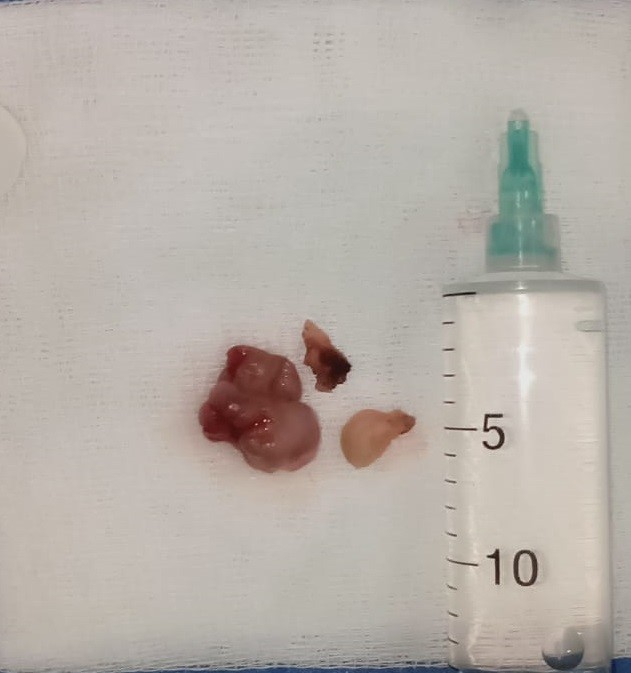 Figure 3: Excision of the total mass.

Lobular capillary hemangioma is a common vascular lesion, occurring at any age, with high frequency in children, young men, pregnant women. It is classified as a vascular pseudotumours, this is a benign lesion, considered to be reactive [3-6]. Although the literature data shows that there is no predominance of sex, many clinicians reported that this lesion has a higher incidence in of women compared to men [7], LCH it rarely occurs in the nasal vestibule.The first patient with an intranasal LCH was described in1940 [5,8]. The most frequently seen symptoms are epistaxis and nasal obstruction. It forms a projecting nodule, of average size from 1 to2 cm, reddish-purple in color, narrow base, surrounded by a thin groove, she is often ulcerated, bleeding spontaneously [6]. In its typical presentation, the endoscopic appearance of the lobular capillary hemangioma is a red to violet mass, not exceeding 1 cm [9]. On CT, the radiological appearance of the lesion is a unilateral mass with soft tissue density, on MRI the lesion appears with a hyperintense T2 appearance and a spontaneous hypo-intense T1; on both sequences, a clear improvement can be observed after administration of a paramagnetic contrast age [10]. Clinically, a differential diagnosis of a hyper vascular mass of the nasal cavity in patients with nasal obstruction and/or epistaxis might include juvenile angiofibroma, angiomatous polyp, hemangioma, hemangiopericytoma, paraganglioma, angiosarcoma. In histology, the differential diagnosis includes bacillary angiomatosis, the angiomas of lobulated architecture, Kaposi’s sarcoma; more rarely with epithelioid hemangioma or angiolymphoid hyperplasia with eosinophilia, angiosarcoma well differentiated [11-12]. Histopathologic examination of LCH showsthe lobular arrangement of the capillaries. Eachthe lobule is made of many small capillaries, surrounding often a larger vessel. Endothelial cells are quiet in appearance, more rarely protrudingor focal epithelioid, with a variable number ofmitoses. The connective matrix is loose, fibromyxoid, dotted with spindle or star cells. Between thelobules, there are small arteries and veins. Lesionis coated with a thin epithelium, forming atat the base an invaginated collar.The epitheliumsurface is often ulcerated with changes in theunderlying chorion which takes on the appearance of an ordinary budfleshy inflammatory [2]. The etiology of lobular capillary hemangiomais still not know [2]. A contributing cause can be found in only one third of lesions: post-traumatic stress disorder, pregnancy, antiretroviral treatments (protease inhibitors), EGFR receptor inhibitors [13]. Recurrences are rare, with a percentage between 0 and 40%. Furthermore, complete excision and the elimination of predisposing factors reduce the risk of recurrence [14]. The treatment of choice is surgical excision complete with or without electrocoagulation. Surgery is the treatment of choice for lobular capillary hemangioma. Radical resection requires the dissection on a submucosal plane of the site of attachment of the lesion, which can be performed through an endoscopic approach even with large lesions [15]. Some author recommend other techniques: laser in pulsed mode orcontinuous, cryotherapy, intralesional ethanol injectionor corticosteroids, topical application of imiquimod [4].

LCH of the nasal vestibule is rarely reported in theliterature. Clinically it is a projecting nodule, red in color, bleeding spontaneously. The histopathologic appearance is often characteristic. It consists of a capillary proliferation with lobular architecture forming anexophytic lesionwith epidermal collar. The treatment of choice is surgical excision to confirm diagnosis.

12. Fortna RR, Junkins-Hopkins JM. 2007. A case of lobular capillaryhemangioma (Pyogenic granuloma), localized to the subcutaneous tissue, and a review of the literature. Am JDermatopathol. 29: 408-411. Ref.: shorturl.at/stCP1