Right lobo-isthmic agenesis of the thyroid: A case report

A defect in the embryological development of a thyroid lobe is a rare anomaly [1]. The single thyroid lobe is a rare anomaly that was first described in 1895 by MARSHALL HARADO et al. He reported over a period of 13 years, seven (7) cases out of 12456 thyroid surgeries performed. In the literature, some authors report rare cases of complete agenesis (athyreosis), agenesis of a lobe and/or of the isthmus [1-5]. We report the anatomoclinical observation of a lobo-isthmic agenesis observed in a young woman.

A 36-year-old woman, with no particular history, was admitted to the Department of Otolaryngology, Adolphe SICE General Hospital (Pointe-Noire, Congo) on April 16, 2017 for management of a cystic nodule in the left lobe of the thyroid. This nodule had been known and monitored since 2016 and had recently increased in size. Clinical examination noted a palpable left para-isthmic mobile nodule measuring 5 cm x 3.6 cm, mobile on swallowing. The soft tissue x-ray of the neck did not reveal any pathological calcifications. The ultrasensitive TSH level was normal : 1.76 μ/ml (N: 0.2 - 4.3 μ/ml). Thyroid ultrasonography showed several sharply contoured, iso echogenic nodules 5-18mm in diameter with cystization of some nodules belonging to the left thyroid lobe, associated with an absence of the right lobe and isthmus. As thyroid scintigraphy was not available in our practice, we performed a cervico-thoracic CT scan which demonstrated the existence of a left thyroid lobe and the absence of the right lobe and isthmus. The indication of a lobectomy was retained; intraoperatively, in the thyroid lodge, there was neither a right lobe without the thyroid isthmus, measuring 6 cm in length (figure n°1 and 2); however, on the left side, several cystic nodules developed at the expense of a single lobe were discovered. The microscopic examination of the surgical excision specimen concluded to a colloid adenoma, of involutive aspect, developed on a dystrophic thyroid tissue, without signs of malignancy (figure n°3). The postoperative course was simple, however, a postoperative hypothyroidism had led to the indication of a life-long opotherapy. In total, it was a colloid adenoma developed on a single left lobe in a context of right lobo-isthmic agenesis of the thyroid in a young woman aged 36 years. 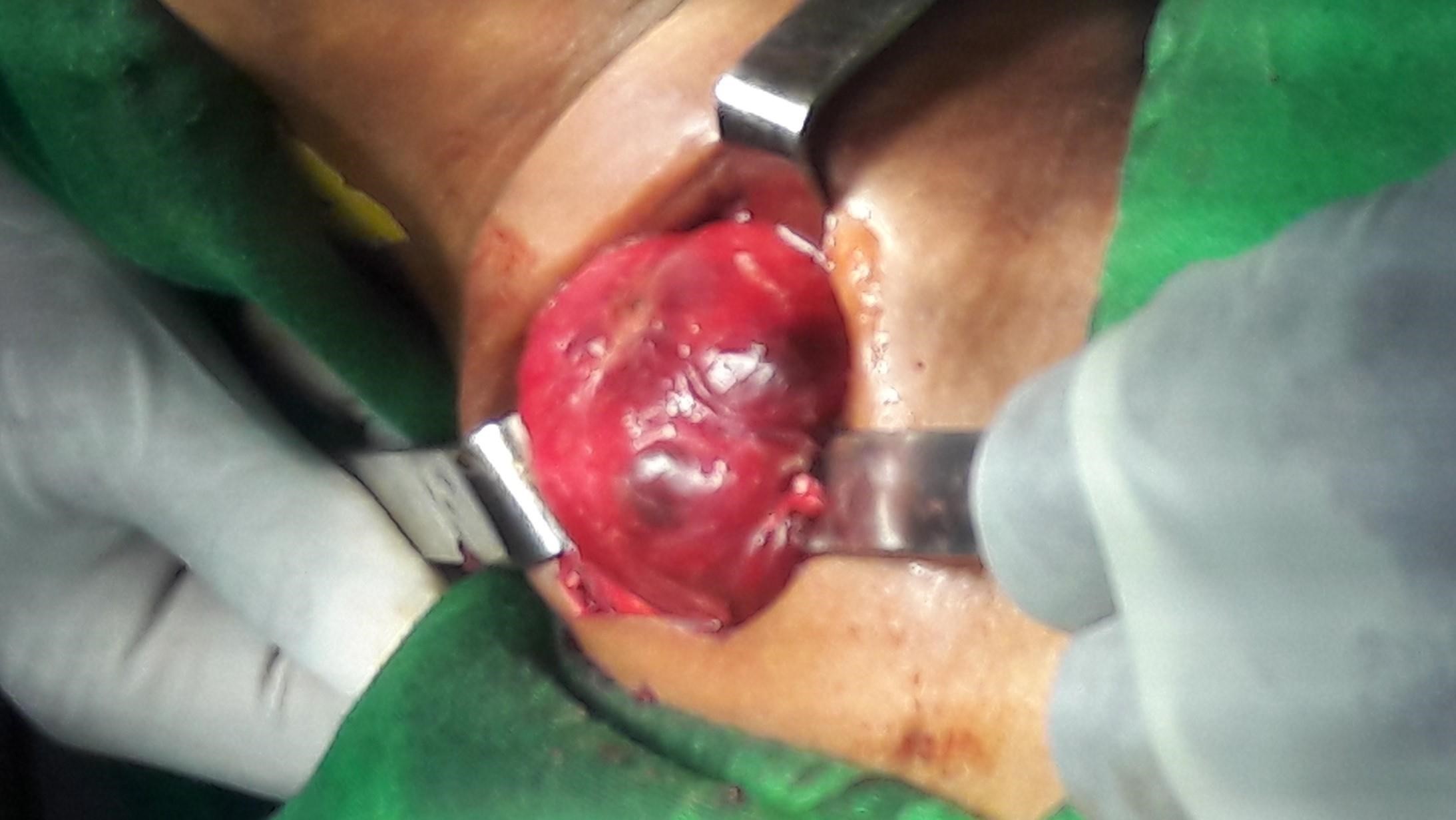 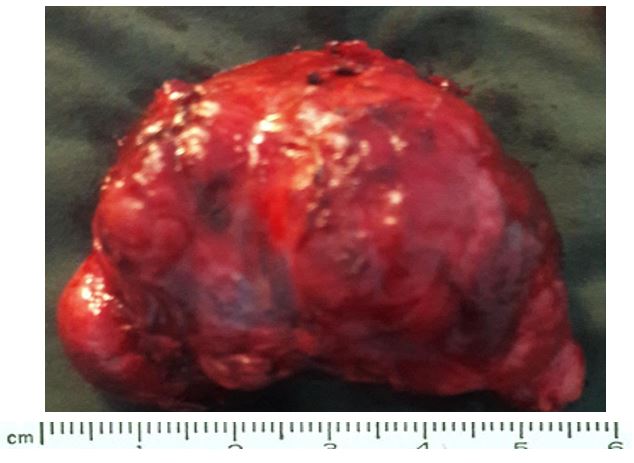 Figure 2: Macroscopic aspect of the unique thyroid lobe without the isthmus, measuring 6 cm in length. 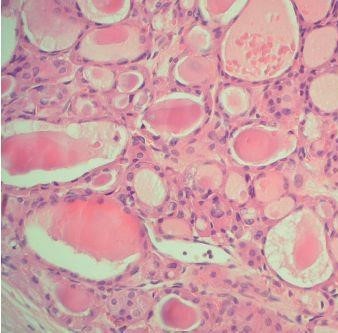 In our current practice of thyroid surgery performed over a period of 10 years at the Adolphe SICE General Hospital in Pointe - Noire, Congo Brazzaville ; out of 350 thyroidectomies performed, only one case of colloid adenoma on a single lobe of the thyroid in the context of right lobo-isthmic agenesis was observed. In the literature, partial or total lobar agenesis of the thyroid is an anomaly of rare embryological origin; also the development of a benign (adenoma) or malignant (thyroid carcinoma) tumor on a single lobe is exceptional. Indeed, some authors such as J.I. HAMBURGER et al [1] reported only 4 cases out of more than 7000 scans performed; on the other hand YAKAWA et al [cited by JI HAMBURGER et al] did not find any case out of 1007 autopsy studies performed. In the study of R. KRIEF et al carried out in 1976 [2] on 32 cases collected, he reported 3 cases of children (one case aged 12 years and two cases aged 14 years). The thyroid gland is of endodermal origin [1,6]. The thyroid gland results from a thickening of the primitive pharyngeal floor; it invaginates and then migrates towards the thyroid box to be definitively placed in front of the trachea around the 16th day of gestation [6]. Very early on, it divides into lobes from the thyroglossal tract which will become the pyramidal lobe (Lalouette's pyramid) [6,7].

Migration abnormalities leading to thyroid ectopia are the most frequent congenital abnormalities of the thyroid gland, whereas developmental abnormalities of the thyroid gland are rare and often of unknown cause. They are usually described as complete or partial agenesis (hemi-agenesis, agenesis of the isthmus, agenesis of a lobe or the isthmus [1,2,4,6,8,10,11]. A genetic determinism is likely, as these thyroid agenesis appear to be associated with mutations that sit on the TTF-1, Pax 8 and TTF-2 genes or its homologous FKHL15 [6]. Because of its asymptomatic nature, lobar agenesis is an anomaly that remains unrecognized until clinical signs appear. As in most cases of thyroid pathology, lobar hemi-agenesis is found mainly in women. Our case is a young woman, 36 years old, whose agenesis is mainly on the right lobe and the isthmus. The revealing sign was a hypertrophy of the thyroid gland ; on the other hand BENRAIS et al report 4 cases of global hypertrophy of the thyroid, 6 cases of thyroid nodule, including one cold nodule and 5 isofixing nodules, and finally one case of clinical hypothyroidism confirmed by biology [12]. The positive diagnosis of a single lobe is generally confirmed by ultrasound as reported respectively by BENRAIS et al [12]. The differential diagnosis is essentially with an autonomous thyroid nodule or a surgical lobectomy. However, CHIMENES et al reported an observation of a toxic adenoma developed on a single thyroid lobe, where all the examinations as well as the surgical verification had failed [13]. This macroscopically invisible lobe functioned perfectly once the inhibition was removed. Surgical treatment of nodular pathology on a single lobe is the treatment of choice according to most authors; post-surgical replacement therapy with L-thyroxine for life is essential. BECQ-GIRAUDON et al do not recommend the use of radioactive iodine ; on the other hand, and tolerate the use of radioactive iodine up to 10,000 rads in the single lobe of the thyroid in cases of hyperthyroidism [14].

Biologically, the normal serum TSH level, as well as the absence of an increase in serum TSH, allows a priori to eliminate the possibility of a chronic autoimmune thyroiditis. The observation that we report is similar to the various cases of hemi-agenesis reported in the literature in several respects : hemi-agenesis is frequent in the female population (sex ratio: 3/1) [2,7,15], the diagnosis is usually of fortuitous discovery at scintigraphic exploration. The scintigraphy is requested in front of a unilateral increase in volume of the thyroid [16,17], The remaining lobe is often the site of colloid adenoma as in our patient's case, or of other types of lesions, such as adenocarcinoma, congenital or acquired hypothyroidism, hyperthyroidism, multinodular goiter, Graves' disease, or Hashimoto's disease [18,19].

Lobar agenesis of the thyroid is an exceptional anomaly that can be evoked in front of an isolated paramedian thyroid formation. Its discovery is often fortuitous and is facilitated by the more and more performing diagnostic means, such as cervical ultrasound, scintigraphy and CT scan.