Management of Laryngo-Tracheo-Bronchial foreign bodies in children at the Adolphe SICE General Hospital in Pointe-Noire, Congo

Abstract
Background: The objectives of our study were to describe the epidemiological, diagnostic, therapeutic and evolutionary aspects of laryngotracheobronchial foreign bodies.
Patients and methods: This was a descriptive and retrospective study carried out over a period of 12 years (2007-2019), in the ENT and cervico-facial surgery department of the General Hospital Adolphe SICE of Pointe-Noire (Congo).
Results: During this period, we collected 20 files of patients whose age varied from 1 to 10 years with an average age of 5 years who were received for foreign body inhalation. The average age of our patients was 5 years with extremes ranging from 1 to 10 years. A male predominance was noted with a sex ratio of 1.62. The average consultation time was 3 days (2 hours and 30 days), 12 patients (60%) were seen within the first 24 hours. The penetration syndrome was the most common functional sign in 10 cases (50%). The standard cervico-thoracic radiograph was normal in 7 cases (35%). The foreign body was opaque in 10 cases (50%), and in 1 case atelectasis was noted. CT scan was performed in 2 cases (10%). The larynx was the most common location. Indeed, the glottis was affected in 8 cases (61.5%), followed by the supraglottis in 3 cases (23.07%) and the subglottis in 2 cases (15.3%). The plastic toys were found more in the glottis in 6 cases (30%). The evolution after endoscopy was favourable in 17 cases (85%), 2 cases required thoracic surgery, and one death was recorded.
Conclusion: Laryngo-tracheo-bronchial foreign bodies are frequent, they pose a public health problem. Their management depends on the strength of the relationship between the ENT surgeon and the anaesthetist.

Laryngotracheobronchial foreign bodies are the prerogative of children from the age of prehension (5 months). Their inhalation is a frequent and dramatic accident which can immediately put at risk the vital prognosis of a child who was previously in perfect health. Apart from a penetration syndrome which is the key to the diagnosis, the revealing signs are misleading, which means that this accident can go unnoticed. The aim of this paper is to describe the epidemiological, diagnostic, therapeutic and evolutionary aspects of laryngo-tracheobronchial foreign bodies in children.

This was a retrospective and descriptive study over a period of 12 years (2007-2019), in the ENT and cervico-facial surgery department of the Adolphe SICE General Hospital in Pointe-Noire. The diagnosis was made clinically by the existence of a penetration syndrome, by imaging and endoscopy. All patients admitted with a laryngotracheobronchial foreign body and who had a positive endoscopy were included in the study. Any patient with an incomplete record and a negative endoscopy was not included in the study. Thus 20 cases of laryngotracheobronchial foreign bodies were included. The variables studied were epidemiological (frequency, age and sex), diagnostic (circumstance of occurrence, time of consultation, reason for admission, clinical and radiological signs), therapeutic and evolutionary.

• Frequency
During the study period, 120 foreign bodies of the aerodigestive tract were recorded in our department; of which 20 cases of laryngotracheobronchial location, i.e. 16.6%.
• Age and sex
The age ranged from 1 to 10 years, with an average age of 5 years. Children under 4 years of age were the most numerous, with 14 cases (70%). Males predominated, with 13 boys and 8 girls, giving a sex ratio of 1.62.
• Diagnostic data
The circumstances of occurrence were during games in 12 cases, i.e. 60%; during meals in 8 cases, i.e. 40%. The average consultation time was 3 days (2 hours and 30 days), 12 patients, i.e. 60%; patients were seen within the first 24 hours. Penetration syndrome was the most common functional sign in 10 cases (50%).

Physical signs were dominated by dyspnoea (14 cases, i.e. 70%), this dyspnoea was expiratory in 10 cases (71.42%) and inspiratory in 4 cases (28.57%). Coughing was observed in 3 cases (15%), and finally the auscultatory anomalies with the stethoscope, in particular the presence of bronchial rales and the reduction of vesicular murmurs, were in the order of 3 cases (15%). The paraclinical data are marked by the realization of the cervico-thoracic radiography in 18 cases (90%), this radiography was normal in 7 cases (35%), and the foreign body was found opaque in 10 cases (50%) and in 1 case an atelectasis was noted (5%). CT scans were performed in 2 cases (10%). Therapeutically, endoscopy is the gold standard performed in the operating theatre under general anaesthesia with specifically 4 types of intervention: laryngoscopy was indicated in 13 cases (65%), bronchoscopy in 3 cases (15%), thoracic surgery in 2 cases (10%), tracheotomy in 1 case (5%), and one case was the subject of a specific extraction by the respiratory re-education technique over several sessions. The location of the foreign bodies was classified as intraoperative; and the laryngeal location was the most common (13 cases, 65%) (Table I). In the larynx, the glottis was the most affected anatomical part in 8 cases (61.5%), followed by the supraglottis in 3 cases (23.07%), and the subglottis in 2 cases (15.3%). The nature of the foreign bodies extracted was dominated by plastic toys which were found in the glottis in 6 cases (30%) (Table II). The clinical evolution after endoscopic extraction was favourable in 17 cases (85%); 2 cases required a thoracotomy. One case of death occurred in the context of acute respiratory distress.

Foreign body inhalation is one of the most serious domestic accidents that most often involves the paediatric population. We found 14 children, i.e. 70% under 4 years of age. The vulnerability of this age group found in most studies is linked to the acquisition of prehension and the oral stage of psychomotor development, as children tend to put any object within reach in their mouths [1,8,10,12,14]. A male predominance is found in the literature [1,5,8]; it is thought to be related to the turbulent activity of boys, a finding that was also found in our study. The penetration syndrome common to all the locations corresponds to the activation of the respiratory defence reflexes of laryngeal spasm and expulsion cough [2]. The penetration syndrome is present in 73 to 95% of cases, according to most authors [1,10,14,15]. Our study found it in 50% of cases. The average consultation time is 3 days (2 hours and 30 days), 12 patients (60%) are seen within the first 24 hours. DIOP et al found a longer consultation time of 12.5 days, justified by the distance from the treatment centres [1]. We performed a standard radiograph on all our patients, which allowed us to find a radiopaque foreign body in 30% of cases; whereas BOUFERSAOUI et al found a radiopaque foreign body in 16.02% of cases [14]. In the literature, the sensitivity of chest radiography varies between 49-88% and its specificity varies between 9-71% [9,15]. Chest CT is currently recommended in cases of diagnostic doubt, especially in the absence of a frank penetration syndrome and a radiopaque foreign body. It would reduce the frequency of white endoscopies [4,9]. We have performed a tracheotomy following a foreign body embedded in the glottis, MAIGA et al found 9% of cases and DIOP et al had performed a tracheotomy in 55, 8% of cases [1]. Rigid tube endoscopy under general anaesthesia is one of the most reliable diagnostic methods; it not only allows the foreign body to be visualised but also extraction under visual control using forceps (alligator, tooth, pike) and an aspirator [8,9,12,13,14]. Endoscopic extraction is a delicate procedure that requires the cooperation of the ENT doctor and the anaesthetist. It allowed us to extract the foreign bodies in 16 cases, i.e. 80%. We had recourse to thoracotomy in two children after an unsuccessful attempt by rigid bronchoscopy; MNEJJAM et al reported 8 cases of thoracotomy (2 bronchotomies and 6 pulmonary resections) out of a series of 225 cases of foreign bodies of the lower airways [12]. During endoscopy, certain complications can be observed, notably: laryngeal oedema, erosion of the mucous membrane, bronchial spasms and rhythm disorders.

In our series, a 3 year old child who ingested a fish bone in a subglottic location presented a cardiorespiratory complication immediately after extraction, requiring observation in the intensive care unit. We recorded one case of death during bronchoscopy, which occurred in the context of respiratory distress. This low mortality rate is similar to that of most authors in the literature (1 to 2%); however, this rate seems higher in certain African series (4.6% in Senegal) [1,7,15]. These cases of death raise the problem of the seriousness of laryngeal foreign bodies and the morbidity of tracheostomy in children [4,7,10,11]. In our series we noted a predominance of laryngeal location in 65% of cases. DIOP et al found similar results. The size of the larynx in children and the size of certain foreign bodies which tend to block at the glottic level are two explanations [1]. The nature of the foreign body depends on the socio-cultural and dietary habits of the populations studied. Plastic toys (30%) were found in the majority of our series. A good number of authors have found a predominance of peanut seeds [1,5,11,14,15]. OUOBA et al found 80% oilseeds in their series, and for VIOT et al peanuts represent 47% of foreign bodies [3].

Laryngotracheobronchial foreign bodies are quite frequent in our environment. Their adequate management requiring expert hands and good cooperation with the anaesthetists gives satisfactory results. However, their morbidity is aggravated by laryngeal localizations. 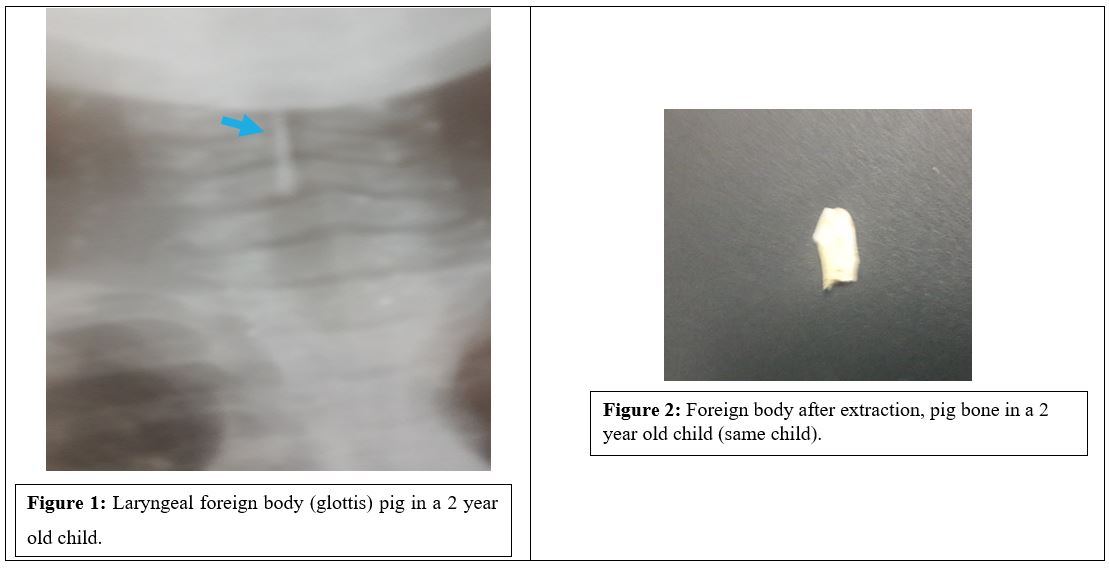 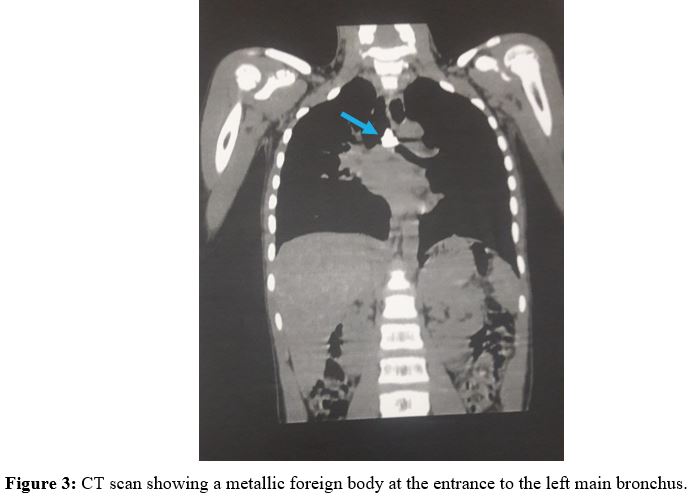