Introduction: Cervical spine injuries are relatively rare, and caused by external sharp and vulnating agents. They can be potentially serious and life-threatening. The aim of this work was to describe the epidemiological, clinical and therapeutic aspects.
Patients and Method: This was a descriptive, retrospective, cross-sectional study of the records of patients with neck trauma from January 1, 2005 to December 31, 2018, conducted in the ENT and Cervico-Facial Surgery Department of the Adolphe SICE Hospital in Pointe-Noire (Congo-Brazzaville).
Results: The study included 30 patients from a total of 107 cases of cervicofacial trauma. The average annual incidence of cervical trauma was 2 cases per year, with a predominance of males, including 25 males (83.3%) and 5 females (16.6%), i.e. a sex ratio of 5:1. The average age was 34.4 years with extremes of 17 to 70 years. 50% of our patients were single. The circumstances of occurrence were represented by knives (83% of cases), followed by road traffic injuries (13%) and firearms (3%). Sharp objects were the most common cause of injury (83%). The mechanism of injury was a section in 87% and a contusion in 13%. Neck pain was the main symptom in 100% of cases. The wound represented 87% of the physical examination, followed by edema and hemorrhage in 33% and 20% respectively. The trauma was isolated in 80% of cases and in a context of polytrauma in 4%. Exploratory and reparative cervicotomy was the most common surgical procedure, 87%, followed by tracheotomy, 27%. The evolution was simple, in spite of the parietal suppuration noted in 10% of the cases.
Conclusion: Despite their rarity, cervical trauma remains a worrying surgical emergency in our work context. These traumas are the prerogative of young adult males in connection with external vulnating agents with high traumatic risk.

Neck trauma is damage resulting from violent action in the anterior neck region. This region is the site of the intracervical viscera and vascular-nerve formations surrounded by a musculoaponeurotic covering plane. These open or closed traumas can be isolated or be part of a polytrauma. In Africa, studies conducted in Tunisia and Burkina Faso report 64% of open traumas and 36% of closed traumas, respectively [1,2]. Cervical trauma is likely to be life threatening due to airway obstruction, uncontrollable hemorrhage or cerebral ischemia following vascular lesions [2]. They are therefore a medical and surgical emergency. Mortality is 3 to 6% and is essentially related to vascular lesions [2].

In Congo-Brazzaville, the study conducted by Itiéré Odzili et al at the Brazzaville University Hospital (CHUB) on penetrating neck wounds in Brazzaville reported 33 cases over 6 years [3]. In Pointe-Noire, no study has been carried out of this subject; thus we propose to study the epidemiological, diagnostic and therapeutic aspects of cervical trauma at the Adolphe SICE Hospital in Pointe-Noire.

This was a retrospective, descriptive, cross-sectional study of the files of patients with cervical trauma from January 1, 2005 to December 31, 2018, a period of 13 years. This study took place in the ENT and cervicofacial surgery department of the Adolphe SICE General Hospital in Pointe-Noire.

We identified 30 records of patients with neck trauma hospitalized in the department during the study period. Patients with cervical spine trauma or iatrogenic neck trauma (neck surgery, endoscopic instrumental maneuvers) were not included. Exclusion criteria were patients with incomplete medical records for the study variables. Data collection was based on an information sheet that collected information from the clinical records of the hospitalized patients, hospitalization registers and operative reports. The variables studied were epidemiological (relative frequency, age, sex, marital status), clinical (circumstance of occurrence, time of consultation, nature of the vulnating agent, clinical signs) and therapeutic (time of management and type of treatment).

• Circumstances of occurrence and vulnating agent
The circumstances of occurrence were dominated by stab wounds with more than 80% of cases (Table II) ; thus sharp objects represented more than 80% of the vulnating agents (Table III).
• Mechanisms of injury and nature of the trauma
According to the mode of occurrence, 26 cases (87%) concerned a section corresponding to an open trauma, and in 4 cases, it was a contusion corresponding to a closed trauma, i.e. 13%.
• Functional and physical signs
Cervical pain was the constant symptom found in all patients, i.e. 100% of cases. On physical examination, the majority of the patients had presented a wound in 87% of the cases, followed by oedemas (33%) and haemorrhage (20%) (Figure 2; figure 3).
• Lesion assessment
The cervical trauma was isolated in 80% of cases, and in 4% of cases it was a polytrauma. The exploratory cervicotomy performed in 87% of the cases, allowed us to assess the lesion assessment illustrated in figure n°4.
• Therapeutic and evolutionary aspects
The average time of treatment was 15 hours with extremes of 1 hour to 72 hours. The medical treatment consisted of hydroelectrolytic resuscitation, combining antibiotics, anti-inflammatory drugs, analgesics, anti-tetanus serotherapy and correction of blood loss. The surgical treatment involved reparative cervicotomy in 26 cases, i.e. 87% of cases, and tracheotomy in 8 cases, i.e. 27%. 22 cases, or 87%, had benefited from musculoaponeurotic trimming.

The evolution was complicated by parietal suppuration in 3 cases (10%); the only after-effects observed were retractile or keloid scars in 1 case (0.3%). None of our patients had accepted psychological support even though it was recommended. No death was recorded in our series. 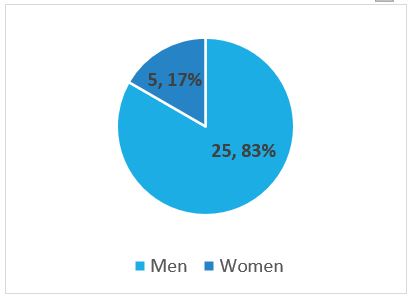 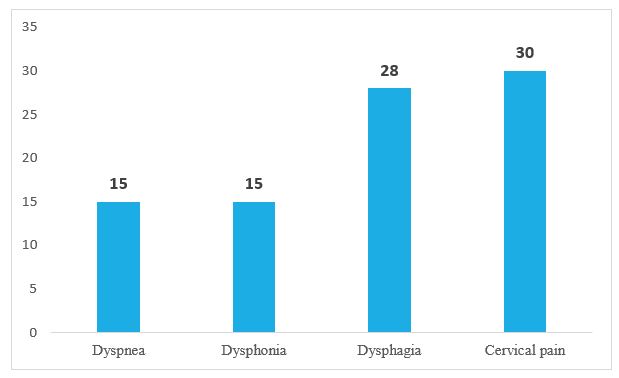 Figure n°2: Distribution according to the functional signs. 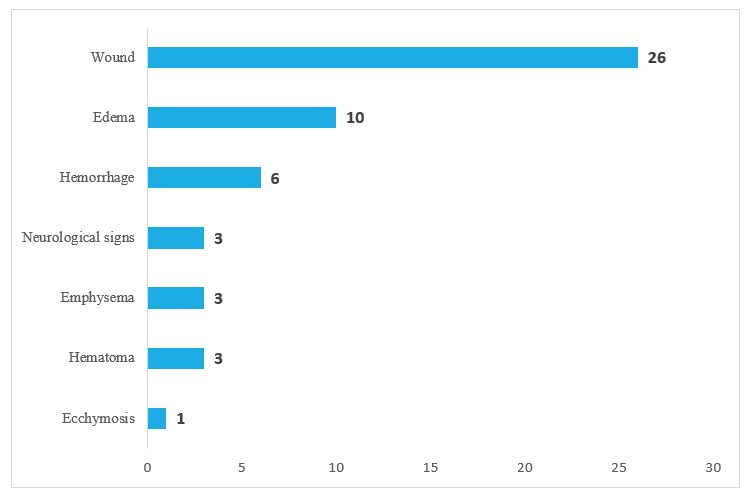 Photo 3 and 4: Intraoperative surgical sutures and healing after one month postoperatively (blue arrow).

The annual incidence of cervical trauma in current professional practice is low; indeed, we report an average of 2 cases per year; as well as that reported in the literature, which is between 1 and 2 cases per year [1, 4]. The victims of these traumas are mostly young, with an average age of about 30 years, with a male predominance. This observation is reported by most authors [1,4,10]. Attempts at autolysis were found in the majority of cases (25 cases, i.e. 83%) with a vulnating agent, and the knife was the sharp object most frequently used. This observation is made by some authors in Africa [10] and in Europe [5,6], who link these suicide attempts to difficult living conditions (stress, unemployment, despair). Neck pain is the most frequent symptom, 100%, followed by dysphagia (24%) and dysphonia (24%). The constant presence of neck pain is confirmed in 100% by the majority of authors [2]. The trauma is open in 87% of cases and closed in 13% of cases, this similar observation is noted by DIOUF et al [10] and COBZEANU et al [5] who find respectively 77% and 56%. The average delay in management was 15 hours with extremes of 1 hour to 72 hours; ITIERE ODZILI et al [3] in Brazzaville found an average delay of 21 hours with extremes of 1 hour to 96 hours; DIOUF et al [10] noted a delay of 38 hours with extremes of 1 day to 9 days. Cervicotomy was performed in 87% of cases, our results are close to those of most authors GHORBAL et al [3], OUEDRAOGO et al [2], NASON et al [8] respectively 47.6%; 56.6% and 61.5%. For OUABA et al [9] and DIOUF et al [10], exploratory cervicotomy should be preferred when the recommended examinations are not available. Tracheotomy was performed in 8 patients, i.e. 27%, our results are similar to those of OUEDRAOGO et al [2] in Burkina Faso, BUMPOUS et al [11] and VERSCHUEREN et al [12] in the United States, respectively 53.3% ; 75% and 51.8%. The reparative cervicotomy was performed during the same operation as the exploratory cervicotomy. The case fatality rate was nil in our study. DIOUF et al [10] reports a mortality rate of 6%, the high rates are observed in COLOMBO et al [13] in Italy 12.5% and BUMPOUS et al [11] in the United States 13%. This difference could be explained by the fact that cervical trauma by firearm was less frequent in our work context.

Cervical trauma is rare, and when it occurs, it is part of a surgical emergency. These traumas concern young adult males. They are most often open, and the knife is the most common vulnating agent. Cervical pain is the main symptom, cervicotomy and tracheotomy are the most common therapeutic procedures. The evolution in most cases is favorable.