Copyright: This is an open-access article distributed under the terms of the Creative Commons Attribution License, which permits unrestricted use, distribution, and reproduction in any medium, provided the original author and source are credited. Copyright © 2022; Diembi S

Background: Thyroid cancers are relatively rare malignant tumours. In Africa, the incidence of thyroid cancer has been increasing since 1970 in most countries. In Congo-Brazzaville, this increase can be explained by the accessibility of diagnostic means (ultrasound, cytopuncture), and the increasingly common practice of thyroid surgery.

Materials and Method: This was a retrospective descriptive study carried out in the ENT and cervico-facial surgery department of the Adolphe SICE General Hospital in Pointe-Noire, Republic of Congo. This study covered the period from January 2005 to December 2017, a period of twelve (12) years.

Results: 383 patients underwent surgery for a thyroid tumour, and according to the inclusion criteria listed above, 13 cases of thyroid cancer were retained (3.4%). The average age was 55.4±24.1 years with extremes ranging from 25 to 100 years. The sex ratio M/F was 0.44. The clinical presentation was revealed as a multinodular goiter in 8 cases (61.5%). The most common histological type was papillary carcinoma in 10 cases (77%). Total thyroidectomy was performed in 84.6% of our patients; it was performed immediately in 69.2% of cases. The development of morphological techniques (immunohistochemistry, cytogenetics) has brought considerable progress in the diagnosis and therapeutic management of thyroid cancer in recent years.

Thyroid cancers are relatively rare malignant tumours. They are often found in conjunction with a thyroid nodule or goitre [1,2]. In young people, they may be found in the setting of chronic cervical adenopathy [1,2]. Two to thirty percent (2-30%) of thyroid cancers go undetected and are discovered at autopsy [3]. Worldwide, the prevalence of thyroid cancer is low, ranging from 0.1 to 3.7 per 100,000 population in men and from 0.4 to 9.6 per 100,000 population in women [2]. In Africa, the incidence of thyroid cancer has been increasing since 1970 in most countries; this increase can be explained by the accessibility of diagnostic means (ultrasound, cytopuncture), and the increasingly common practice of thyroid surgery. They generally have a good prognosis and present various clinical and evolutionary aspects depending on their histological origin [5,6,8]. In Congo-Brazzaville, a descriptive study carried out by Peko JF et al in 2004 put the relative frequency at 0.7% in a hospital series of 567 cases from the Brazzaville University Hospital. However, in the health department of Pointe Noire, an industrial city, no study is available. The aim of this study was to describe the epidemiological and therapeutic aspects of thyroid cancer in this city.

This was a retrospective descriptive study carried out in the ENT and cervico-facial surgery department of the Adolphe SICE General Hospital in Pointe-Noire, Republic of Congo. This study covered the period from January 2005 to December 2017, a period of twelve (12) years. The data were collected by exploiting the medical records of the operated patients. The patients included had undergone thyroid body surgery with a histological diagnosis of malignancy. Patients with incomplete records or lost to follow-up were excluded from the study. The variables studied were age, sex, clinical form, radiological appearance, histological type, and type of treatment. Surgical specimens were fixed in 10% buffered formalin and cut at 5-6µm after dehydration and paraffin embedding. Histological sections were stained with haematoxylin and eosin and examined under a light microscope. The histological classification used was that of the UICC 2004 (5). An immunohistochemical study was performed using anti-cytokeratin 7, cytokeratin 20, AE1/AE3, CD20, CD3 antibodies in cases of suspected primary thyroid lymphoma. Fine needle aspiration was not routinely performed during the pre-therapeutic work-up; nor was the extemporaneous examination of the surgical specimen during surgery.

During the study period, 383 patients underwent surgery for a thyroid tumour, and according to the inclusion criteria listed above, 13 cases of thyroid cancer were retained; this represents a relative frequency of 3.4%.

Distribution of patients by age and sex

The distribution of patients according to age and sex is presented in Table I. The average age was 55.4±24.1 years with extremes ranging from 25 to 100 years. The sex ratio M/F was 0.44, with a predominance of 9 females to 4 males.

Table II shows the distribution of patients according to histological type. The most common histological type was papillary carcinoma in 10 cases (77%). The clinical presentation was revealed as a multinodular goiter in 8 cases (61.5%), and as a nodule in 5 cases (38.5%). The macroscopic appearance was most often a multilobular goiter with signs of collateral circulation or hypervascularisation (Figure 1). One case of medullary carcinoma concerned a 25 year old man, the youngest in the series, presenting with a left latero-cervical satellite adenopathy (superior jugular lymph node) of 15cm in length, which was completely removed by cervicotomy. The histological result corresponded to a metastasis of a medullary carcinoma of the thyroid. Additional radiological (cervical, thoracic and abdominal CT scans) and biological (thyroid hormones and calcitonin) tests confirmed the diagnosis of medullary carcinoma and detected pulmonary, hepatic and spinal metastases (Figure 2). A case of non-Hodgkin's lymphoma of the MALT type concerned a 71 year old woman. She had a history of controlled hypertension associated with uncomplicated diabetes mellitus. Microscopic examination of the surgical specimen coupled with an immunohistochemical study concluded that the tumour was a MALT type B non-Hodgkin's lymphoma (Figure 3). 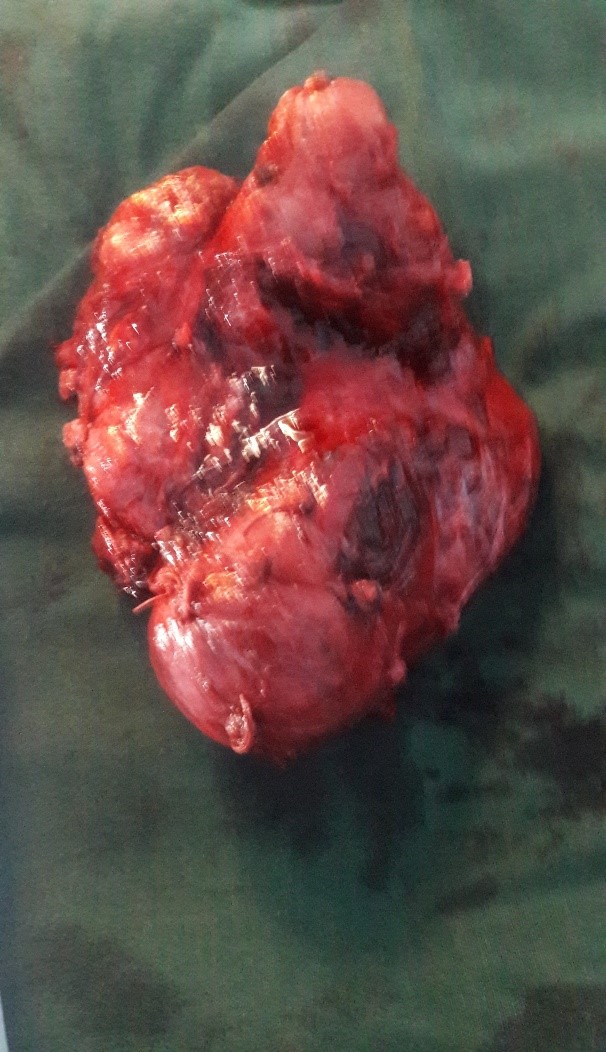 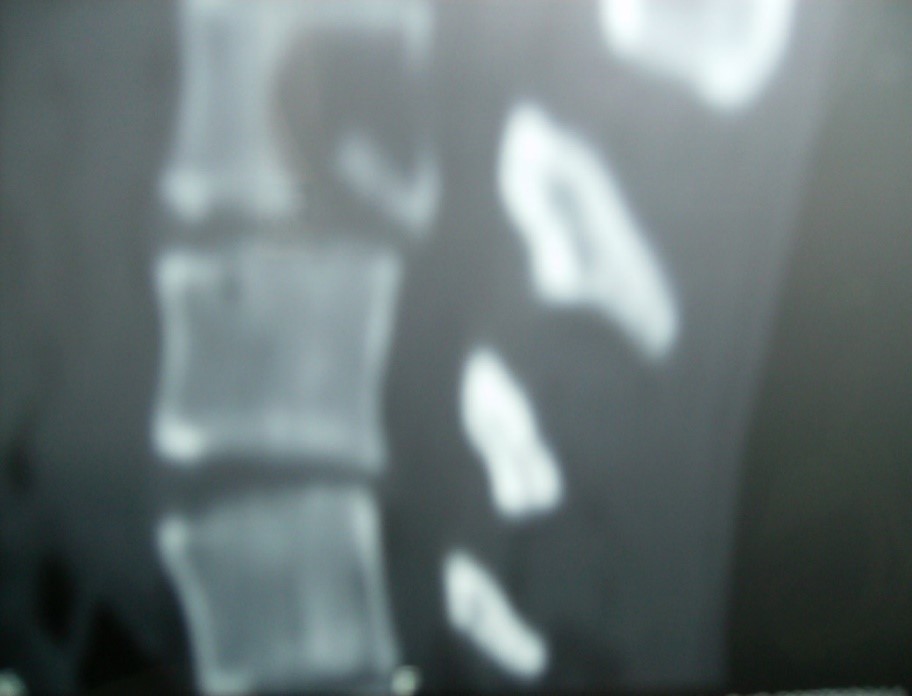 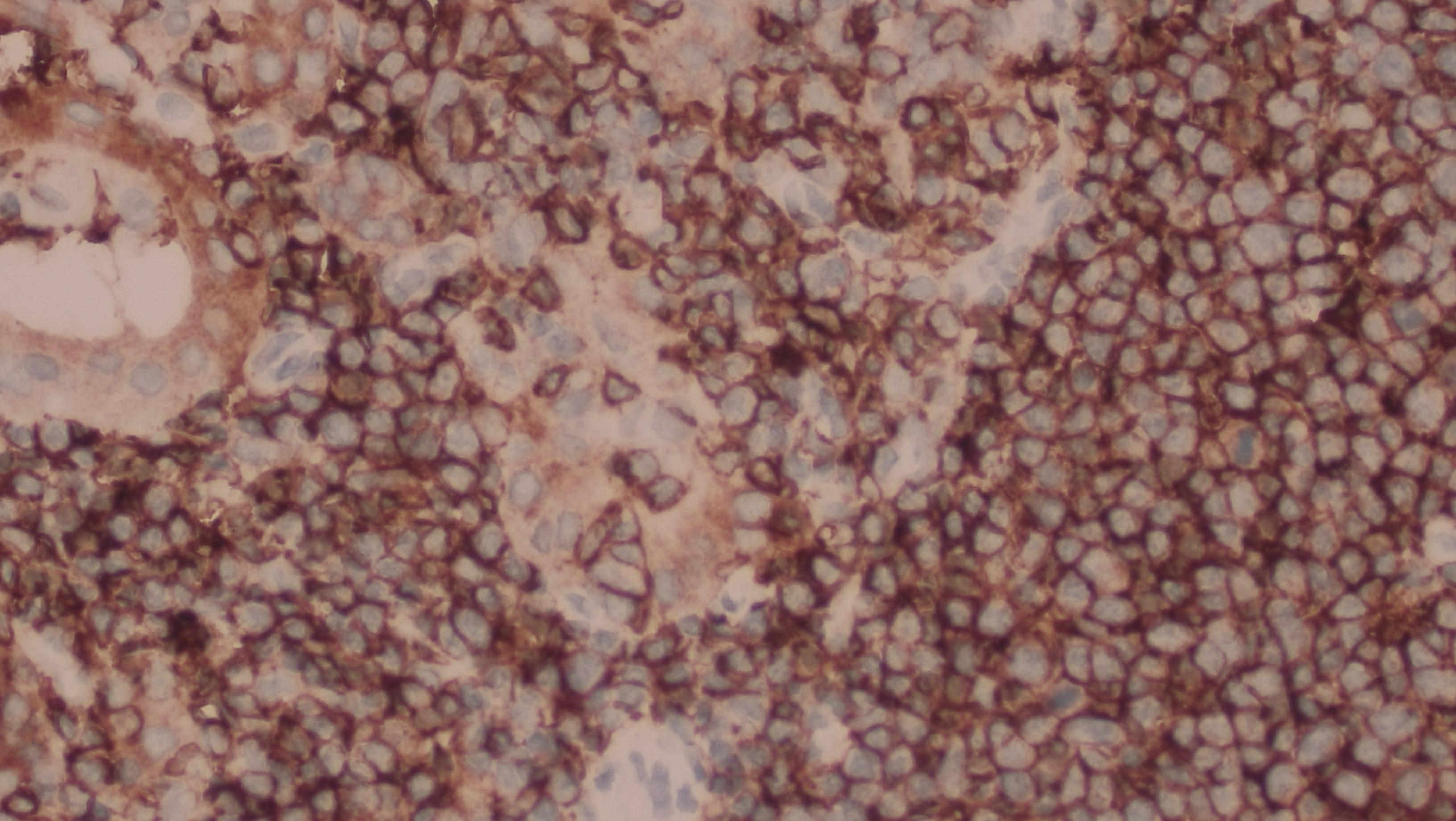 Total thyroidectomy was performed in 84.6% of our patients; it was performed immediately in 69.2% of cases. A subsequent surgical totalization after definitive anatomical-pathological examination in favor of malignancy was performed in 2 cases (15.3%). Lymph node dissection of the cervical chains was carried out in 2 cases (15.3%), presenting clinical or ultrasound adenopathies. It concerned the recurrent and jugulo-carotid lymph nodes. Post-operative follow-up was simple in 84.6% of patients, except for a transient hypocalcaemia in two patients. Hypothyroidism was found in eleven of our patients had undergone total thyroidectomy. It was corrected by a treatment based on thyroid extracts of L-Thyroxine type between 100µg and 150µg, prescribed for life with clinical controls every 3 months; then 6 months; 1 year and 3 years. The evolution was rapidly favourable. Two patients with papillary carcinoma had undergone a lobo-isthmectomy with healthy excision limits. The only patient with medullary carcinoma had undergone total thyroidectomy with segment VI cervical lymph node dissection. Complementary treatment with thyrosine kinase inhibitors (Vandetanib) was performed. The evolution was marked by death, 6 years after surgery and complementary treatment. The patient with MALT non-Hodgkin's lymphoma had undergone total thyroidectomy with segment VI cervical lymph node dissection.

Our study concerns a hospital series with a relative frequency of thyroid cancer estimated at 3.4% over a period of 12 years. In the literature, some African authors place this frequency between 0.6% and 10% with a female predominance and a relatively young age. Indeed, according to Rakotoarisao et al [1], in Madagascar, the relative frequency of thyroid cancer is 0.6%, with a female predominance of 82%. According to N'Tyonga Pono et al in Gabon [10], thyroid cancers account for nearly 10% of thyroid tumours [2, 5, 8]; but there are almost as many papillary forms as vesicular forms; whereas in the West 75% of thyroid cancers are papillary [1,9]. Studies reported in Western countries show a predominance of thyroid cancers in elderly subjects (between 50 and 75 years), most often female; whereas in our series the subjects are younger, with an average age of around 50 years, and a predominance in the 25 to 49 age group. This tendency is found by Rakotoarisao et al [1] in Madagascar. Thyroid cancer exists in men and represents 3/13 in our study, whereas in Gabon, Morocco and Benin, the authors found variable proportions of 2/9, 25/102 and 7/34 respectively [10,9,8]. In the literature, most authors report that the predominant histological type is papillary carcinoma; this finding is also observed in our study with an estimated frequency of (77%), i.e. ten (10) females against 3 males in our series. Clinical presentation in the form of multinodular goitre was predominant; however, 38.5% were thyroid nodules.

Single nodular aspects of thyroid tumours usually raise suspicion of malignancy, especially when there are satellite cervical adenopathies in favour of cancer. This is the case with the medullary carcinoma reported in our series. Primary thyroid lymphoma is a particular haematological entity developing essentially on pre-existing thyroid lesions, in particular a lymphocytic thyroiditis of HASHIMOTO (1). The association is found in 25 to 100% of cases depending on the series (1,12,13). The relative risk of lymphoma in subjects with autoimmune thyroiditis is approximately 67 times that of healthy subjects (17). However, not all HASHIMOTO thyroiditis progresses to lymphoma (17,18).

Fine needle aspiration coupled with biological, ultrasonographic and time-lapse examination data can point to the malignant nature of a goitre or thyroid nodule; however, Siun Walsh et al (13) assert that the result of cytopuncture of a thyroid lesion must always be confirmed by histological examination of the thyroidectomy specimen in order to obtain a definitive diagnosis. The classical treatment modalities are guided by the histological type of the cancer and especially by its lymph node status. Total thyroidectomy with cervical lymph node dissection of segment VI coupled with complementary treatment based on thyrosine kinase inhibitors (Vandetanib) and radioactive iodine irradiation are the most indicated treatment regimens. According to the study reported by Sherman et al [12], 30% partial responses are observed in metastatic patients with thyrosine kinase inhibitors, but most often prolonged stabilisation of the disease is achieved. Irradiation and radiotherapy are not indicated in medullary carcinoma according to Kloos et al [13]. According to Natsuko et al [14] the overall survival at 5 years is 94% in the case of primary thyroid lymphoma when the treatment regimen combines the surgery with the complementary chemotherapy. In our case only surgery was performed bacause of the cervical pressure.

Thyroid cancer is rare in Africa, and particularly in our daily practice. The development of morphological techniques (magnetic resonance imaging, immunohistochemistry, RT PCR, cytogenetics...) has brought considerable progress in the therapeutic and theranostic (targeted therapy) management of thyroid cancer in recent years.