Ballistic trauma of the face: A case report

Copyright: This is an open-access article distributed under the terms of the Creative Commons Attribution License, which permits unrestricted use, distribution, and reproduction in any medium, provided the original author and source are credited. Copyright © 2022; Itiere Odzili FA

The authors report a case of ballistic trauma of the face in a 20-year-old patient with a facial fracture with cutaneous-mucosal and muscular decay and maxillofacial haemorrhage. Surgical trimming with haemostasis and reconstruction was performed in the operating theatre. Through this observation, we highlight the difficulties related to the care and rehabilitation of these patients, and report our experience in their management.

Ballistic trauma of the face is a group of injuries induced by firearms [1,2]. It is a formidable maxillofacial emergency [1]. These injuries are often complex and their management has benefited from advances in medical imaging and surgical procedures, which have changed the prognosis, as well as the occurrence of sequelae [2]. Through this observation we describe the organization of the management of these lesions of the face in the ENT and cervicofacial surgery department of the Hospital and University Centre of Brazzaville.

This is a young man of 20 years old, unemployed, with a history of an attempt at autolysis (2 years before the accident), and who presents a trauma of the face by firearm (Calibre 12) following a marital disappointment. The accident took place at around 11 am in the late morning in GOMA TSE-TSE (about 30 km south of Brazzaville). The patient was rushed to the Brazzaville University Hospital for treatment. The pick-up and the mode of transport were not medical. On arrival at the emergency department of the CHU at 5PM (6 hours after the accident), the patient was conscious and well oriented in time and space. The examination made it possible to establish an injury assessment. There was a submental penetration point (Figure 1) and extensive left facial decay involving the left upper lip, the nostril wing, with destruction of the maxillary process and part of the nasal root (Figure 2 and 3). The rest of the examination was normal. The patient was admitted to the operating theatre 8 hours after the trauma. An intubating tracheostomy was performed. We proceeded to a trimming with haemostasis, and extraction of bone debris. The intraoperative lesion assessment revealed: a traumatic amputation of the anterior 1/3 of the tongue, a bone fracture involving the anterior 1/3 of the maxillae, the mandibular symphysis and the floor muscles. We placed two nasal stents to preserve the facial relief (Figure 3 and 4).Mandibular osteosynthesis was not performed during the operation.

The patient was admitted to the general intensive care unit. A feeding gastrotomy was performed postoperatively. Broad spectrum antibiotic therapy was instituted. A computed tomography (CT) scan and magnetic resonance imaging (MRI) performed during the hospitalization confirmed a large bone fracture (Figure 6). The gastrotomy tube was removed four months after the trauma. Psychotherapy was carried out during hospitalization. Sequelae such as facial asymmetry, unsightly scarring (Figure 7), trismus and speech difficulties were noted in the patient. 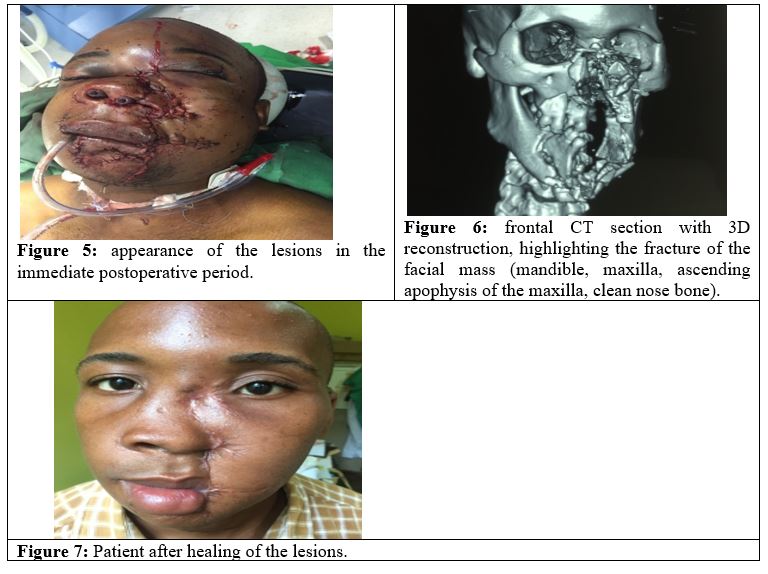 The lack of work devoted to this effect in the Congo, in particular, and in Africa in general, has led us to make our modest contribution on this subject. The interest of this observation lies in the seriousness of the lesions and the resulting aesthetic and psychological damage. Some authors [1,2] share our opinion.

Our clinical case testifies to the male predominance of these traumas. This male preponderance has been found in Moroccan and Western literature [1,3]. However, in the United States, this type of suicide is becoming increasingly common among women [2]. In the United States, it has been found that men tend to aim for the head, whereas women more often direct the weapon at the abdomen [3].

In France, this suicidal mode tends to concern men in their forties, whereas in the United States, adolescents and young adults are the most concerned. The existence of a personal psychiatric history and alcohol dependence are the psychiatric conditions most often found in firearm suicides.

In the literature, there are five categories of small arms: handguns, long rifled weapons, shotguns, semi-automatic weapons and automatic weapons [4,7]. The shotgun is a weapon designed to be fired from the shoulder with lead cartridges. These are the weapons most used in suicides in our country. In the West, however, handguns and shotguns have been described [5,7].

In North Africa, as in the West, there is a system of medical evacuation of ballistic trauma victims [1,5], which is coordinated with triage in the case of multiple victims [6,8]. Medical transport is still precarious or embryonic in our developing country, despite the declared will of the health authorities to fill this gap. Our patient was evacuated by public transport. A clinical examination at the scene of the accident allows patients to be classified according to the severity of the ballistic trauma. The latter is a function of the clinical impact, the site of the injury and the injury mechanism [8].These injured patients do not require additional explorations immediately, but an extremely urgent surgical procedure that could be performed in any structure [7].

The management of patients with craniofacial wounds remains above all a challenge, due to potentially difficult access to the upper airway with a risk of asphyxia.

CT scans of the face in millimetre slices, with coronal, sagittal, and axial slices, allow mapping of bone lesions [6,10] including the number of fractures, displacements, and classification to guide surgical indications and therapeutic procedures [8,10].

Ballistic trauma requires surgery more often and more rapidly than closed trauma [7, 9]. Usually the conditions for the management of these injuries are different depending on whether they occur in wartime or in peacetime [5, 9]. The contribution of the maxillofacial surgeon is essential in reconstruction to minimise unsightly scars (facial asymmetries, deformities of the nasal pyramid). This reconstruction uses free bone grafts, muscle flaps or composite flaps (tongue flaps and musculo-mucosal flap) vascularised by the facial artery [1,3,5,9]. Micro-anastomosed flaps and particularly the micro-anastomosed osteo-fascio-cutaneous flap are of great use [1,3,8,11].

The limited technical platform in our practice did not allow our patient to benefit from this additional treatment. The prevention of infection in ballistic trauma is a crucial element of its management. Indeed, while their early mortality has been considerably reduced by optimising initial care. Infection is currently the leading cause of secondary mortality [1,8,10]. Bacterial contamination can be primary, concomitant with the injury. It then involves germs from the land and water environment associated with the wounded person's resident skin and mucous flora. Contamination can also be of secondary and nosocomial origin. Early and extensive debridement surgery with excision of devitalized and necrotic tissue is another form of prevention of primary infection. Associated antibiotic therapy is designed to prevent microbial proliferation, which is logarithmic and begins as early as six hours after the trauma [4].

The use of firearms in civilian practice has meant that ballistic trauma is no longer the exclusive domain of war surgery. The management of ballistic trauma is a challenge. Despite the progress made in the management of facial trauma caused by firearms, the occurrence of aesthetic repercussions due to unsightly scars (facial asymmetries, deformities of the nasal pyramid) and functional repercussions is still frequent.