Copyright: This is an open-access article distributed under the terms of the Creative Commons Attribution License, which permits unrestricted use, distribution, and reproduction in any medium, provided the original author and source are credited. Copyright © 2022; Itiere Odzili FA

The thyroglossal tract cyst (TTC) is a rare malformation, arising from the persistence of a normally transient anatomical disposition during the embryogenesis. They pose two essential problems that are: the postoperative recurrences and their malignant transformation. Thus, the objective of this study is to describe the epidemiological, clinical and therapeutic aspects of the cysts of the thyroglossal tract in Hospital and University Center of Brazzaville.

Material and Methods: This was a retrospective, descriptive and cross-sectional study from January 1, 2010 to December 31, 2020(10 years). The study was conducted in the ENT and visceral surgery departments of the Hospital and University Center of Brazzaville. This study covered all patients for whom the diagnosis of TTC was made with postoperative histological confirmation.

Conclusion: The cysts of the tract represent the most common cervical malformations of the child. Ultrasound is essential before any surgery. The treatment of choice remains the technique of Sistrunk.

The thyroglossal tract cyst (TTC) is a rare congenital malformation [1]. Their formation can be explained by the persistence of an anatomical arrangement normally transient during embryogenesis. They are the most common cervical malformation in children [1- 3]. They are characterised by cystic expansion of the remnant thyroglossal tract and account for 40% of congenital malformations [4,5]. These malformations usually present before the age of 6 years, however their incidence in the adult population has been estimated at 7% [6,7]. The evolution is punctuated by frequent postoperative recurrences and the possibility of malignant transformation in 1% of cases [1,4,7]. These evolutionary modalities make the whole problem of the management of these affections. The aim of this study is to describe the epidemiological, diagnostic and therapeutic aspects of these cysts in Hospital and University Center of Brazzaville.

This was a retrospective, descriptive, crosssectional study, from 1 January 2010 to 31 December 2020. The study was conducted in the ENT and visceral surgery departments of Hospital and University Center of Brazzaville. We included in this study all patients received during the study period who were diagnosed with TTC and who had a complete medical file with histological confirmation. All patients with incomplete records were not included in this study. Patients were recruited from the operating room, inpatient and outpatient registers. We studied the following parameters: epidemiological data (age, sex, time to consultation), diagnostic data (clinical and ultrasound), therapeutic data (operative techniques), evolutionary data (at six months and one year after surgery) and histological data. The data were entered and analysed using Microsoft Word and Excel. 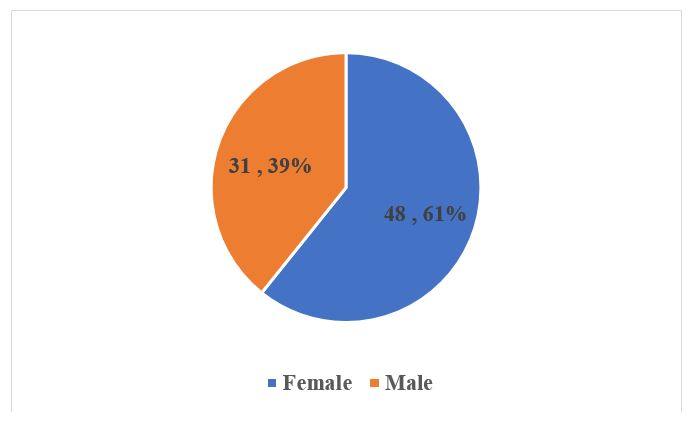 Figure 1: Distribution of patients by sex. 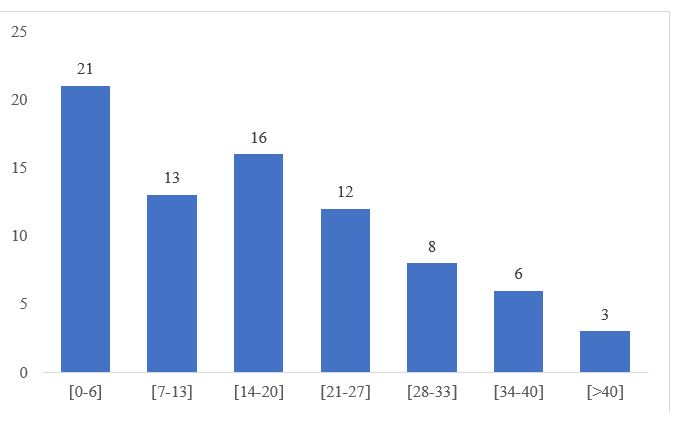 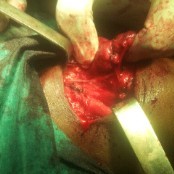 Figure 3: Intraoperative exposure of a cyst of the subhyoid tract.

Clinically, all TTC presented as a smooth, regular, rounded swelling that was mobile in relation to the skin planes and fixed in relation to the deep planes. The cysts were medial in 90% of cases, subhyoid in 60% and suprahyoid in 40%. In all cases, pathological anatomy confirmed the benign nature of these cysts with regular squamous epithelium sometimes associated with thyroid cells. All patients (100%) were operated on using the Sistrunk technique (figure n°3). Antibiotic and analgesic treatment were combined in all patients.

Healing was effective in 94% of cases (n=74) with a follow-up of 8 months. However, we noted 6% of recurrences (n=5). The recurrences occurred between 6 months and 1 year with an average delay of 13 months.

TTC are the most common cervical dyssembryoplasia [3,5]. They are the second most common cause of cervical swellings in children [5] and are rarely the site of a malignant tumour, although this is possible in 1% of cases [3,6], hence the importance of systematically reading the surgical specimens. The first description of carcinoma dates back to 1911 [8]. The papillary type is the most common in 83% of cases. The other types are mixed papillary follicular carcinomas (8%), squamous cell carcinomas (6%) and HURTLE cell carcinomas (<1%) [8]. The practitioner is led to suspect a neoplastic process by the hard, fixed or irregular character of the mass.

The prevalence of TTC varies according to the authors; in our series, we noted a prevalence of 0.53%, whereas Ondzotto G et al [11], notes that congenital cysts and fistulas represent 2% of the consultation. This difference may be related to the fact that our study focused exclusively on TTC, whereas Ondzotto G et al [7], focused on congenital cysts and fistulas. In our series, patients ranged in age from 6 to 67 years with a mean age of 14 years, whereas Ondzotto G et al [11], noted a mean age of 21+/- 5 years with extremes from 10 months to 50 years. Boko et al [2], noted a mean age of 5.22 years. Similarly, Segun A et al [9], reported a median age of 6 years with extremes of 13 days to 55 years. The female sex was predominant in our series with 61% of patients. This corroborates the findings of other authors [7,12] who mention respectively 63% male and 73.3% female. Amana et al [12], notes this female predominance. On the other hand, some authors [7, 9] note a male predominance in 56.5% of cases. This difference is probably due to a selection bias. Clinically, all TTC presented as a smooth, round, regular swelling in our study. These data corroborate the data in the literature [1, 3, 7, 12]. Indeed, many authors [2, 7, 8, 12] have found that cervical swelling was the most frequent reason for consultation in 80%.72% and 96.77% of cases respectively. Elsewhere, speech difficulties or functional disorders such as dysphonia, dysphagia and dyspnoea may be the telltale signs, particularly in sublingual or buccopelvic locations [6,7], which have been associated with sudden infant death syndrome [6]. The location was median in 90% of cases, subhyoid in 60% of cases and suprahyoid in 40% of cases. Boko et al [2] found that these cysts were hyoid in 46.15% of cases, subhyoid in 32.70% and suprahyoid in 21.11% of cases.

Systematic ultrasonography is an excellent diagnostic guide and can also point to malignant degeneration by demonstrating a solid mural component with suspicious micro calcifications [9]. The classic ultrasonographic appearance may be a heterogeneous echostructure containing hyperechoic debris with areas of cystitis [8,10,13]. CT can be used in rare locations (sublingual) and can differentiate from dermoid, epidermoid and cystic hygroma cysts. All patients were treated with the Sistrunk technique; we believe that this technique reduces the risk of recurrence due to the wide excision of the cyst and the peri-cystic environment. The low rate of recurrence in 6% of patients seems to be an additional argument for choosing this technique. Many authors [1,2,7,8] also support this choice. Pathological anatomy confirms the diagnosis by showing regular squamous epithelium. The possibility of malignant transformation of these cysts requires systematic histological reading of all surgical specimens, if possible, extemporaneously [3,10,12]. The presence of carcinomatous foci, with capsular invasion and invasion of the surrounding area, requires a maximalist attitude in the surgical procedure [10,14].

Thyroglossal tract cysts (TTC) are uncommon in Brazzaville, as shown by their low frequency. Female patients under 6 years of age are the most affected. Their treatment is surgical using the Sistrunk technique. Malignant degeneration remains a possibility, hence the interest of anatomopathological examination of all surgical parts.