Welcome to Open Journal of Pulmonology and Respiratory Medicine

Aritcle Type: Letter to the Editor

Copyright: This is an open-access article distributed under the terms of the Creative Commons Attribution License, which permits unrestricted use, distribution, and reproduction in any medium, provided the original author and source are credited. Copyright © 2019; Chun-Chieh Yang

Invasive pulmonary Aspergillus infection during or after severe influenza infection in an immunocompromised patient or a previously healthy person has been reported in the literature [1-2]. In addition, coinfections of Staphylococcus aureus or Streptococcus pneumoniae with influenza are common, whereas simultaneous infections of legionellosis with aspergillosis are unusual in patients with influenza [2]. We herein report a diabetic patient who presented with a community-acquired pneumonia (CAP). The initial sputum culture yielded Aspergillus species and S. aureus, which were coinfected with influenza A, Pneumococcus and Legionella, with a deteriorated fatal course.

A 63-year-old man with diabetes mellitus felt general malaise and cough with sputum for 3 days. He was admitted to the intensive care unit (ICU) of the hospital on June 20, 2015 due to pneumonia with respiratory failure. There was no fever, diarrhea, headache, or skin rash. He denied travel and contact history. On examination, a blood pressure of 80/60 mmHg was noticed. The breath sounds revealed bilateral fine rales. Laboratory data included WBC 15,700/μL; band, 18%; CRP, 91.9 mg/L; BUN, 50 mg/dL; creatinine, 2.38 mg/dL; blood sugar, 221 mg/dL and HbA1C, 9.1%. The initial chest x-ray (CXR) film showed mild infiltration in perihilar area of left lung on June 20 (Figures 1A). The result of urinary Legionella Ag test was negative. Empirical antibiotic therapy included piperacillin-tazobactam and levofloxacin.

The initial sputum cultures yielded Aspergillus species and Staphylococcus aureus which was resistant to oxacillin. The blood Aspergillus Ag index using galactomannan assay was 4.89 (normal, <0.5), which was detected one week after hospitalization. The CXR film showed pneumonia in progression on June 28 (Figure 1B). Then, PCR for FluA of nasopharyngeal swab was positive. Pneumococcus Ag and follow-up Legionella Ag tests of urine samples became positive. Then antimicrobials were shift to oseltamivir, imipenem, levofloxacin, tigecycline and voriconazole. 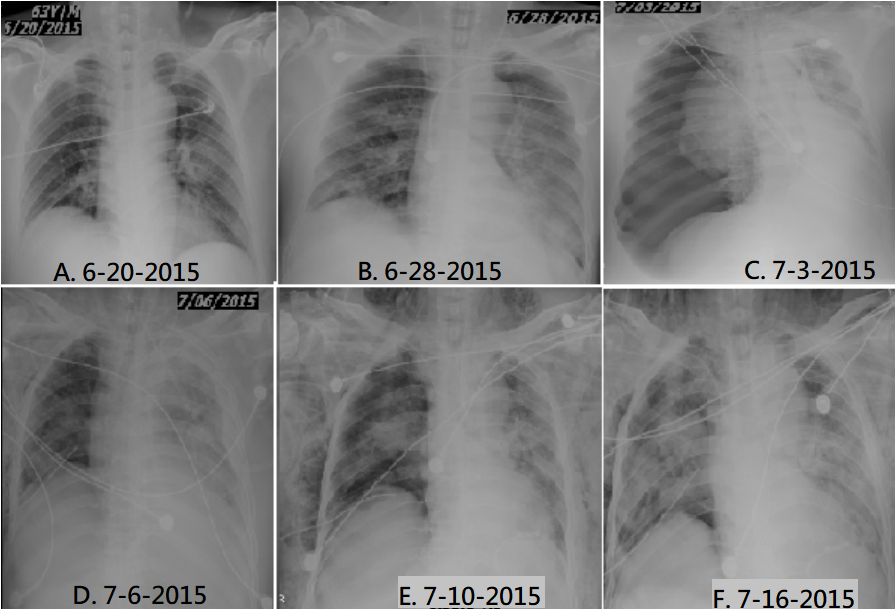 Coinfections caused by L. pneumophila and A. fumigatus were rarely reported, that might cause progression of Aspergillus disease [3]. Simultaneous L. pneumophila pneumonia and invasive aspergillosis could occur in an asthma patient receiving corticosteroid therapy [4]. On the contrary, intravenous administration of the corticosteroid to reduce severe inflammation of legionellosis might be associated with subsequent development of invasive aspergillosis [5]. The causes of deterioration in our case were multifactorial, especially a major event of tension pneumothorax.

In conclusion, the human immunity will be diminished during post-influenza status. Thereby invasive Aspergillus infection may severely complicate the pneumonia, such as pneumothorax. On the contrary, influenza should also be diagnosed after sputum isolation of Aspergillus in a patient with CAP. Our case highlights the need to continue consider the potential multiple co-infections of influenza, aspergillosis, legionellosis, S. aureus and pneumococcal pneumonia.

The study and waiver from the inform consent process were approved by the Institutional Review Board (IRB) of the Chi Mei Medical Center, Tainan city, Taiwan (IRB Serial number 10801-002).