Welcome to Open Journal of Pulmonology and Respiratory Medicine

Copyright: This is an open-access article distributed under the terms of the Creative Commons Attribution License, which permits unrestricted use, distribution, and reproduction in any medium, provided the original author and source are credited. Copyright © 2020; Yasser A El Sayed

We report an eight year female patient admitted to the department of pediatrics at Abbasia Pulmonary Hospital at Cairo, Egypt. The child was complaining of pain on the right lower chest and upper abdome. On evaluation by CT of the chest, there was a huge posterior mediastinal mass occupying more than three quarters of the right hemithorax. Preoperative histopathology using CT guided needle biopsy revealed ganglioneuroma. The tumor was resected completely via right standard postero-lateral thoracotomy without complications. Postoperative histopathology confirmed the diagnosis of ganglioneuroma.

Ganglioneuromas are rare benign neurogenic tumors which arises from neural crest cells that represents the final maturation stag of neuroblasts [1]. The incidence of ganglioneuroma was reported to be 1 in 1,000,000 and thought to develop de novo rather than by maturation of existing neuroblastoma [2]. There are no known risk factors, however the tumors may be associated genetic problems , such as neurofibromatosis type 1 [3]. Ganglioneuromas are commonly classified as pediatric mediastinal tumors occurring in females more than males with a ratio about 3:1 [4]. Most of the cases are asymptomatic and usually discovered accidentally. The most common sites of ganglioneuromas are the posterior mediastinum and retroperitoneum (37.5% each) [5]. Surgical resection of mediastinal ganglioneuroma is the treatment of choice [6]. The aim of this report is to present a case of ganglioneuroma in an eight years old female, to show its mode of presentations, different preoperative tools used for the diagnosis and the standard line of treatment in such cases which is complete surgical resection.

Female child 8-years old presented with her mother to the outpatient clinic of the pediatric department at Abbasis Pulmonary Hospital, Cairo governorate, Egypt. The child was complaining of repeated right sided chest pain. The pain started 4 months before presentation to our hospital, the pain is sharp in character and mild in intensity. The pain was affecting the lower part of the right chest, and sometimes referred to the upper abdomen. The pain is on and off in character and each time lasts about one minute or two. The pain had no aggravating or relieving factors. There was no history fever, weight loss no GIT symptoms or other respiratory symptoms. The history of the pregnancy given by her mother was normal with vaginal delivery. Also, all the child developmental milestones were normal. Family history and consanguinity were negative. A plain chest X-ray P-A view was done in the outpatient clinic that revealed a huge well circumscribed, radio opaque, homogenous posterior mediastinal mass (Figure 1). So, the child was admitted to the pediatric department for further evaluation. 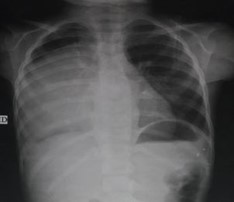 General examination of the child was unremarkable. Chest examination revealed decreased air entry on the right back of the chest with scattered rales. All laboratory investigations were within normal level. CT scan of the chest was done (Figure 2&3) and revealed a giant, non-enhancing about 20 X 23 cm well-defined, more or less rounded mass which is homogenous and non-enhancing. The mass was located on the right hemithorax in the posterior mediastinum. The mass was abutting the thoracic vertebrae in the paravertebral gutter.

Giant opacity occupying most of the right hemithorax. 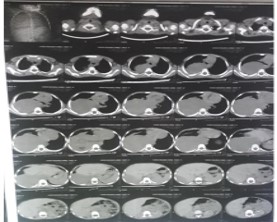 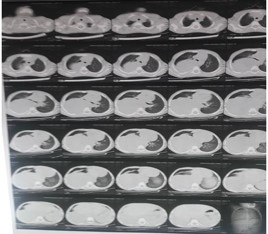 CT guided needle biopsy was taken and histopathology report revealed a ganglioneuroma. After histopatological diagnosis, the patient was referred to the Thoracic surgery department at our hospital for surgery. Surgical resection of the tumor was performed by a team of thoracic and neurosurgery via right slandered postero-lateral thoracotomy in the fifth space. During surgery the tumor was found to be well encapsulated with firm consistency, well circumscribed not invading any nearby structures. Due to the huge size of the tumor, it was resected in two pieces (Figure 4). During operation there was considerable bleeding, so interaoperative embolization of the feeding vessels that stopped the bleeding. The weight of the tumor was 830 gm (Figure 4). Postoerative histopathology confirmed that the tumor was benign ganglioneuroma. The patient had uneventful postoperative course and was discharged from the hospital after 10 days in good condition for regular follow up. 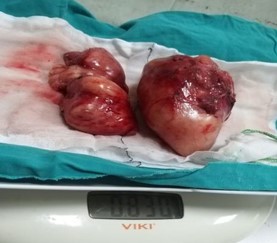 From this case presentation we concluded that mediastinal ganglioneuroma is a rare neurogenic tumor that may be asymptomatic or produce vague symptoms in spite of having a huge size. Mediastinal ganglioneuroma can be diagnosed histopathological preoperatively by using CT guided needle biopsy. Surgical resection is mandatory to relieve symptoms and avoid the extremely rare possibility of transformation to malignant form.