Welcome to Open Journal of Radiology and Medical Imaging

Copyright: This is an open-access article distributed under the terms of the Creative Commons Attribution License, which permits unrestricted use, distribution, and reproduction in any medium, provided the original author and source are credited. Copyright © 2020; Camara MA

Introduction: Breast cancer is the first cancer in woman worldwide. Its prognosis depends on early diagnosis and treatment. CT-scan has an important place in the diagnostic screening and the surveillance of this disease. The goal of this study was to assess the place of CT-scan in extension screening of breast cancer in the Department of Medical Imaging of the Teaching Hospital Mother-Child “Le Luxembourg”.

Methods: It is a descriptive study on the retrospective compilation of CT-scan data of patients in the Department of Medical Imaging of the Teaching Hospital Mother-Child “Le Luxembourg” from May 1st to November 30th 2017. Were enrolled all patients, regardless of gender or age, with breast cancer histologically confirmed and who developed at least one secondary lesion found by CT-scan. CT-scan was performed before and after treatment. CT-scan machines were HITACHI® SUPRIA 16 bars and TOSHIBA® 04 bars, without and with Iodine 350mg intravenous injection.

Conclusion: Breast cancer is a public health concern with a clear predominance of women. In our context, CT-scan still has an important place in the research of secondary lesion in addition to the surveillance of this disease.

Breast cancers are of frequent and varied discovery. They can be reversible or definitive complications, local regional recurrences or metastases. CT-scan occupies an important place in the diagnostic screening and surveillance of this pathology [1,2]. The care of this disease is multi-disciplinary and involves local regional treatment including surgery and radiotherapy as well as medical treatment. The rates of breast cancer in Africa are 2.30% in Mozambique, 9.5% in Uganda and 11.8% in Senegal [3,4]. In Mali, in 2000, breast cancer has represented 5.7% of all diagnosed cancers at the National Institute of Research in Public Health (INRSP), and in 2001, this rate was 7.6% [5]. Lastly, from 2002 to 2005, this cancer has represented the first of gynecologic cancers in the Department of Surgery A of the Teaching Hospital of Point G, Bamako, Mali [5]. Medical imaging plays an important role in the diagnostic screening and the surveillance of breast cancer. It is a serious disease responsible of 15-20% of all deaths due to cancer and 2-5% of all deaths in developed countries. Its prognostic is severe with 35% of survival at 5 years [6,7]. The prognosis depends on the local regional and distance extension (bone, pulmonary, hepatic and cerebral metastasis). The place of CT-scan is no longer to demonstrate in the developed countries where all patients with cancer have an easy access to this screening tool. Its semiology fits some known morphologic characteristics on the standard screening: the tumor, the asymmetrical density and the architectural rupture. In Mali, several previous reports studied the epidemiological, clinical and anatomic pathological aspects of breast cancer. However, none of these studies has focused on the metastatic aspects by CT-scan. We have undertaken this work with the goal to study the place of CT-scan in the extension screening of breast cancer in the Department of Medical Imaging “Le Luxembourg”.

It was a descriptive study on the retrospective compilation of data from patients in the Department of Medical Imaging of the Teaching Hospital “Le Luxembourg” from May 1st to November 30th 2017. Were included in this study all patients regardless of age and gender having a breast cancer anatomic and pathologically confirmed and who developed a secondary lesion. CT-scan was realized before and/or during treatment. Two CT-scan machines, HITACHI® SUPRIA 16 bars and TOSHIBA® 04 bars were used for this study. Patients were scheduled after 6h of fasting before the exam, after ruling out all contraindications. The exam was realized in supine position, hands on the head. A helicoid double scan of 5 mm was realized in apnea after deep inspiration from the cervical base to the pubic symphysis. An iodine contrast was injected intravenously after the non-injected sequence with a dosage at 1 ml/kg (300-350mg of iodine) at a volume flow of 3-4 cc per second. The CT-scan acquisition was done with injection of iodine contrast at a portal time of 70-80 seconds. A third acquisition (delayed) was realized 5-15 min after injection in case of ureteral hydronephrosis. Multi planar, multi window and MIP reconstructions were realized. RECIST 1.1 measurement and comparison criteria were used and were based on the following notions: target lesions: up to five per organ and 10 in total, measurable, superior or equal to 1 cm, and measurable but assessable. Data were analyzed with the software EPI Info version 7.

Over seven months, we recruited 44 patients with one or more secondary locations among the 90 patients with histologically confirmed breast cancer, a frequency of 48%. The mean age of patients was 49 years with extremes of 22 and 75 years. Females represented 97.73% of patients. Family history of breast cancer was found in 27% of patients. Invasive ductal carcinoma was the most frequent type (95.45%) followed by invasive lobular carcinoma (4.55%) and one case of phyllodes tumors. During the pre-therapeutic phase, 34.09% of patients realized a CT-scan whereas lesions were found during CT-scan surveillance screening (Table I).

At the end of our study, we had collected 44 patients with metastatic breast cancer out of 90 patients with breast cancer confirmed by histology, i.e. 48%. This frequency is higher than those of the literature that state that 20 to 30% will develop metastases under treatment (Ref). This difference may be explained by the fact that our patients were seen at a late stage [5,8-10] The mean age of patients was 49 years while Kemeny in England [9] and Margaret in California (USA) [10] reported a mean age of 55 and 60 years, respectively. This result might be explained by the young age of our patients on one side and the easy access to diagnosis tools and early treatment in developed countries on the other side. Female gender was predominant as seen in the literature according to which this disease is less frequent in male [1,5,7]. Family history of breast cancer was found in 27% of our patients which is higher than the data found in the literature reporting 5 to 10% familial breast cancer [5,7]. No precise scientific data explaining this fact were found. Invasive ductal carcinoma was the most frequent histological type as found in the literature that reported 8/10 cases [3,5,7].

All of our patients benefited of CT-scan during the treatment, only 34.9% were enrolled at the pre-therapeutic phase. Secondary multi visceral, pulmonary, hepatic, ganglionic and pleural lesions were more frequent (33%); which was stackable to those of the literature [4,7]. Pleural pulmonary lesions occur by blood-born and lymphatic routes. Regarding pulmonary lesions, they were essentially nodular (31.82%) and in unpolished glass (6.82%). Multiple pulmonary nodules were predominant, 75% of cases. Pulmonary metastases presented mainly in multiple parenchymal nodules as seen in the literature [7,11-13]. However, we have enrolled 6.82% of cases of unpolished glass. Blood-born dissemination is responsible of the peri-bronchial-vascular interstitium, giving this aspect of unpolished glass [4,14]. Pleural lesions were exclusively pleural thickening and pleurisies. Pleurisies were 9.09%, close to European and African data [4,13,14]. Ganglionic lesions were multiple in 31.82%. We have found 28 patients with ganglionic lesions of which 14 presented with multiple localizations (50%). These data were stackable to those of the literature according to which ganglionic metastases were found in 2/3 of patients presenting an advanced cancer [4]. Hepatic lesions were multiple nodules (18.18%) opposite to 6.82% of unique cases. These hepatic lesions were tissular type (multiple nodules) in 66% of the cases, of varied size, that were located in the right kidney in 63% of the cases. Taourel P et al [4] and Sheaf or DH et al [13] have found 30% and 26% of hepatic metastases in 784 and 300 patients with breast cancer. The multifocal involvement could be explained by the vascular dissemination and also the diagnosis at a late stage of our patients. Bone metastases among our patients were lytic in 75%. Our data are comparable to those in the literature [4,15], confirming the osteophile characteristic of breast cancer. Brain metastases were also found. It was a unique tissular nodule with an important perilesional edema which size was disproportionate compared to the tumor. Thera A [13] and Taourel P [4] and Ducray F [16,17] have reported a semiologic description similar to these lesions. It was evoked on the appearance of neurologic signs. It can appear under chemotherapy because that one does not cross the blood-meningeal barrier [4] (Table II).

Breast cancer is very frequent disease with a female predominance. The prognosis of the disease depends on the stage of diagnosis and an adequate response to treatment. In our context, CT-scan has a big interest in searching the secondary lesion as well as in the per and post therapeutic surveillance. This will allow to orient the therapeutic decision. PET scan is a better technique for the ganglionic lesions.

Our work suffers from the small sampling, given that several of the patients were not included, due to the lack of histological evidence. It was monocentric. 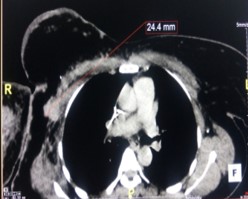 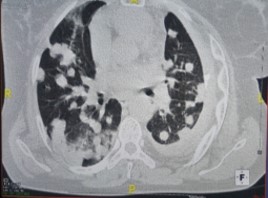 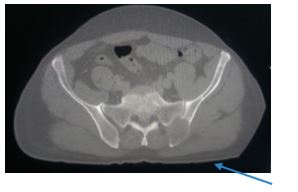 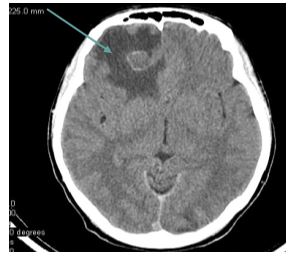 8. Traoré B. 2017. Breast cancer: clinical and therapeutic aspects in the surgical department A of the G-spot teaching hospital Thesis of Medicine. 76: 9-70