Welcome to Open Journal of Radiology and Medical Imaging

Copyright: This is an open-access article distributed under the terms of the Creative Commons Attribution License, which permits unrestricted use, distribution, and reproduction in any medium, provided the original author and source are credited. Copyright © 2021; Arthur J Pesch

Methods: The study included 55 consecutive patients who had HP FSGRE and IRGRE (39 at 1.5T, 16 at 3T) for liver metastases evaluation obtained 20 minutes after gadoxetic-acid administration. Thirty-eight patients had metastases (23 at 1.5T, 15 at 3T). Regions of interest were drawn measuring signal intensity (SI) of the largest lesion, normal liver, inferior vena cava, and background noise. Signal-to-noise (SNR) and contrast-to-noise ratio (CNR), respectively, were calculated as SI divided by standard deviation (SD) of background noise, and (S1-S2)/SD, where S1 and S2 represented SI for tissue 1 and tissue 2. Statistical analysis was via the Wilcoxon Sign Rank test.

Hepatobiliary phase (HP) MR images acquired at approximately 20 minutes following intravenous administration of a hepatocyte-specific contrast agent, such as gadoxetic acid (gadoxetic disodium), have been shown to aid in lesion detection in patients with cancer evaluated for liver metastases [1-8]. Image acquisition is typically done with a 3-dimensional (3D) fat-saturated gradient-echo (FSGRE) technique. At HP, metastases display relatively low signal intensity (SI) compared to the surrounding high SI contrast-agent-containing liver parenchyma [9]. However, since at HP the intravascular component of the agent is mostly cleared by the kidneys, the intrahepatic vessels also display low SI, similar to that of metastases. Consequently, lesions adjacent to vessels may be difficult to detect, particularly when small [6,10,11]. To increase lesion/vessel contrast and improve lesion detection, some researchers have administered an additional, gadolinium-based intravascular contrast agent [12,13]. Inversion-recovery gradient-echo (IRGRE) imaging, also known as TurboFLASH (Siemens Healthineers), IR FSPGR (General Electric Healthcare), or T1-TFE (Philips Healthcare), is a 2-dimensional (2D) single-shot gradient-echo technique that allows rapid acquisition of T1-weighted images during a single breath hold [14-16]. When a slice-selective IR pulse is used [14-16], the vessels display high SI from the inflow of unsaturated blood [17]. Since, for the GRE component of the pulse sequence, a relatively short repetition time (TR) and low flip angle are typically used, the acquisition time per slice is short (~1 second) and images with relatively low signal-to-noise ratio (SNR) are obtained. When a hepatocyte-specific agent is used, however, the SI of liver parenchyma is substantially increased on HP images, and low SI metastases are easily distinguished from the high SI vessels because of increased lesion/vessel contrast. The purpose of this study was to quantitatively compare differences in contrast between liver metastases and vessels on HP gadoxetic-acid-enhanced 2D IRGRE and 3D FSGRE images in order to assess the potential of HP IRGRE for differentiating metastases from vessels.

This retrospective study was approved by our institutional review board which waived the requirement for written consent allowing review of images obtained in 55 consecutive patients referred for liver metastasis MR evaluation with a hepatocyte-specific contrast agent. Thirty-nine were imaged at 1.5T, and 16 at 3.0T. Liver metastases were present in 38/55 patients [men (n=13), women (n=25), age range 33-88 years (mean age 61 ± 12 years)], with the diagnosis established histologically (biopsy n=19; surgery n=10), and/or from sequential imaging (n=9) showing multiple new lesions in a patient with known malignancy, interval enlargement of earlier diagnosed lesions, or decrease in lesion size with treatment. The primary malignancy in the 38 patients included neuroendocrine tumor (n=15), colon cancer (n=7), melanoma (n=5), and other (n=11). In 23/38 patients with metastases imaging was at 1.5T and in 15 at 3.0T. All scanners were from a single manufacturer (Siemens Healthineers). Selection of the scanner varied based on availability as determined by our departmental schedulers. All patients were imaged per our routine protocol for assessing hepatic metastases, and included axial breath-hold FSGRE and IRGRE images obtained 20 minutes after intravenous administration of 0.1 mL/kg body weight gadoxetic acid (Eovist Injection®, Bayer) [18]. In 18 cases IRGRE images were acquired immediately before FSGRE, and in 37 immediately after.

Regions of interest were drawn in the HP FSGRE and IRGRE images to measure the SI of the largest lesion in the 38 cases with lesions, and, in all 55 cases, that of the normal liver tissue (while excluding major intrahepatic vessels), the inferior vena cava (representative of vessels), and the background noise with avoidance of any obvious motion artifacts. The SNR was calculated as the SI divided by the standard deviation (SD) of the background noise. Contrast was calculated using the formula (S1-S2)/S2, where S1 and S2 represented the SIs for tissue 1 and tissue 2 (e.g., lesion and normal liver), respectively. Contrast-to-noise ratio (CNR) was calculated using the formula (S1-S2)/SD. Contrast and CNR values were expressed in the absolute value units (i.e. as a positive number).

Figure 1: Three consecutive axial hepatobiliary phase gadoxetic-acid contrast-enhanced (a,b,c) IRGRE and corresponding (d,e,f) FSGRE images of the liver obtained at 3T in a patient with metastatic neuroendocrine tumor. There are several small low signal intensity metastases (straight arrows) next to vessels. The lesions are readily depicted on IRGRE and can be well distinguished from the adjacent high signal intensity vessels. However, the lesions are more difficult to detect on the FSGRE images because they display similar low signal intensity as the adjacent vessels. Note that the high signal intensity of the vessels in the IRGRE images is from inflow of unsaturated spins. At hepatobiliary phase the vessels in FSGRE display low signal intensity because the intravascular component of the contrast agent has been mostly cleared by the kidneys. The signal void in a, b, d and e (open arrows) in the posterior aspect of the right lobe is caused by susceptibility artifact from surgical clips related to prior wedge resection of a metastasis. 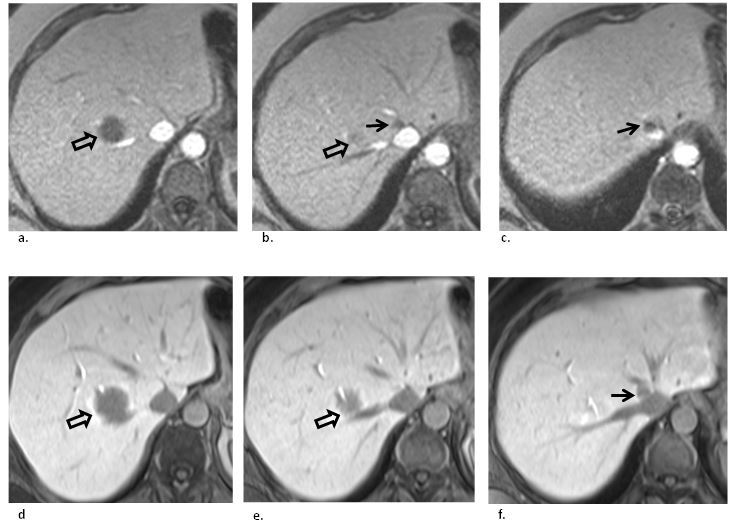 Figure 2: Three consecutive axial hepatobiliary phase gadoxetic-acid contrast-enhanced (a,b,c) IRGRE and corresponding (d,e,f) FSGRE images of the liver obtained at 1.5T in a patient with multiple liver metastases from colon cancer. There is a large metastasis (open arrows) abutting the right hepatic vein posteriorly. The low signal intensity lesion is well depicted against the surrounding normal parenchyma. (b, c) An additional small metastasis (straight arrows) located at the confluence of the right and middle hepatic vein near the inferior vena cava is well depicted on IRGRE because of the high lesion/vessel contrast. However, it is much more difficult to identify on FSGRE (f, straight arrow) because it displays similar low signal intensity as the vessels, and hence can be easily overlooked. 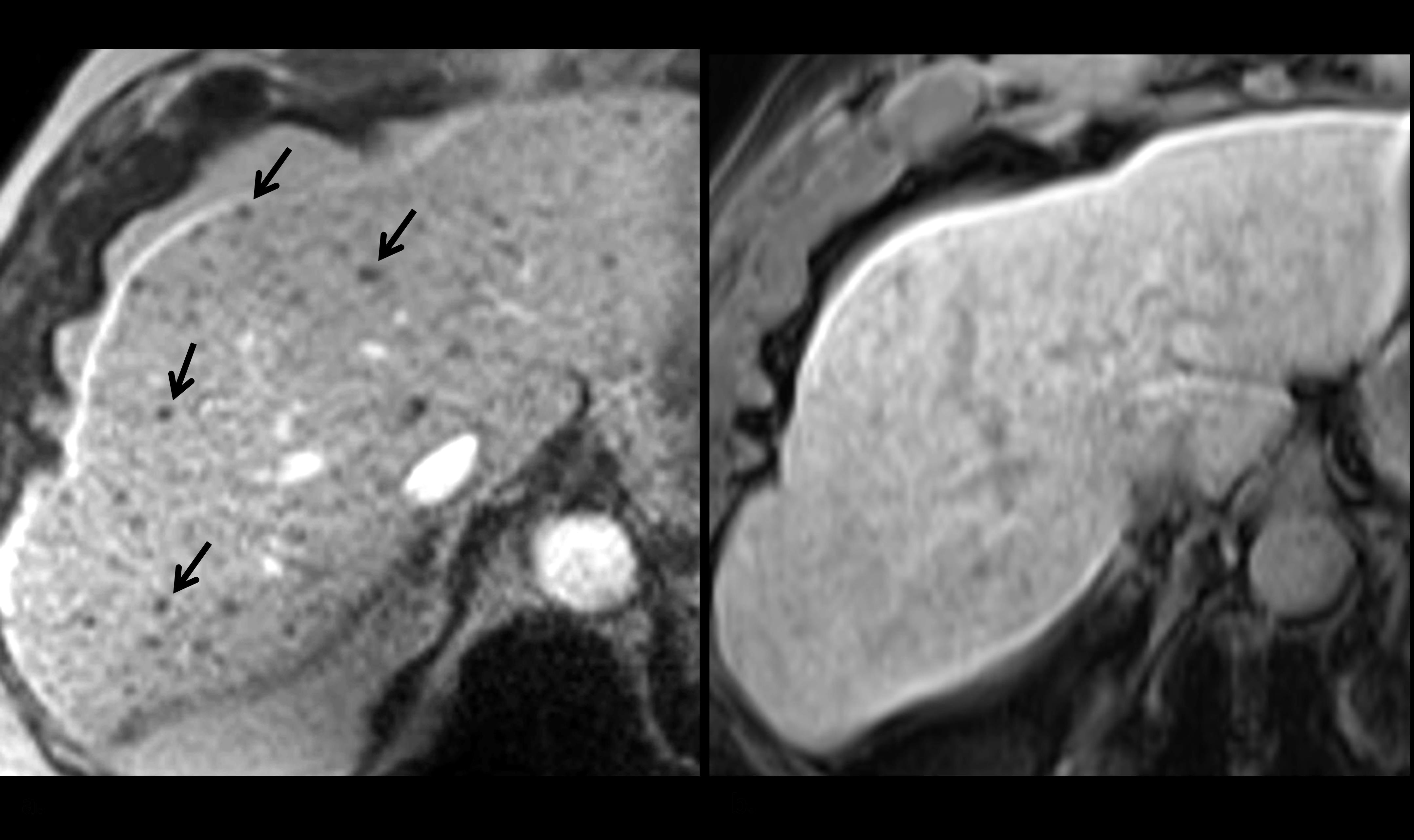 Figure 3: Axial hepatobiliary phase gadoxetic-acid contrast-enhanced (a) IRGRE and corresponding (b) FSGRE images obtained at 1.5T in a patient with metastatic neuroendocrine tumor to the liver who was unable to breath hold completely during the examination. There are numerous small metastases that are readily depicted in (a) as low signal intensity foci (several indicated with arrows), but are imperceptible in (b) as the image is slightly degraded from respiratory motion artifact.