A 14 years old woman with a giant mucinous adenocarcinoma of the ovary: A case report

Copyright: This is an open-access article distributed under the terms of the Creative Commons Attribution License, which permits unrestricted use, distribution, and reproduction in any medium, provided the original author and source are credited. Copyright © 2020; DIOUF A

The diagnosis of ovarian tumor in pediatrics is often difficult and delayed due to unspecific call signs and polymorphic imaging presentations. These tumors are rare, estimated in children at around 2.6 / 100,000 girls per year, functional lesions being excluded. Ten to 20% of them are malignant [1-2] and represent 3% of cancers in girls under the age of 15 [3]. The World Health Organization classifies these tumors into three main groups based on whether they are derived from the surface epithelium, germline cells or ovarian stroma or sex cords. Primary or secondary locations are possible in leukemias and lymphomas [4-5]. Giant ovarian cystadenocarcinomas are rarely described. The huge ovarian masses are mostly benign, but the malignancy should be ruled out by pathology exams. Giant cysts require resection by laparotomy because of compression symptoms or the risk of malignancy, but also to prevent perforation and spillage of cystic fluid into the peritoneal cavity [6]. Here we report an observation made in a 14-year-old girl who was diagnosed with a large ovarian tumor and who was found to be a malignant tumor on pathology with papillary-type mucinous cystadenocarcinoma.

They are miss N ..., a young woman of 14 years old, pubescent, hospitalized in the department for abdomino-pelvic pain associated with a large pelvic mass. In these antecedents, we do not note any particularity; The examination found a distended abdomen with a firm pelvic mass and a depletion of the umbilicus. Pelvic ultrasound finds a tissue mass with bumpy contours of slightly heterogeneous echostruture, predominantly homogeneous. An abdomino-pelvic CT scan confirmed the presence of a heterogeneous tissue mass with hypo dense multi-partitioned cystic zones measuring 188 x 119 x 274mm responsible for bilateral ureterohydronephrosis in favor of a right ovarian tumor. The biological assessment showed an increase in the dosage of CA 125 to 171.8 IU/mL (N <35), a hypochromic microcytic anemia at 6.1 g/dL having motivated an iso-group iso-rhesus transfusion with 4 pockets of globular concentrates. A median sub-umbilical laparotomy was decided under general anesthesia with exploration, a large mass going up to the epigastrium of about 28 x 20 cm, firm, with solido-cystic content and invading the intestines. There was no sign of peritoneal carcinosis. We carried out a suction of the mass content and collected 5 liters of haematic liquid. A right annexectomy was performed allowing the exercise of a mass of 2Kg with an anatomopathological examination of the operating room; the extemporaneous examination being unavailable for technical difficulties. Histological examination of the operating room reveals a mucinous cystadenocarcinoma of the papillary type with colonic differentiation. The post-operative follow-up was simple with clinical and paraclinical monitoring. Chemotherapy based on cyclophosphamide and cysplatin has been started and 6 courses are planned. 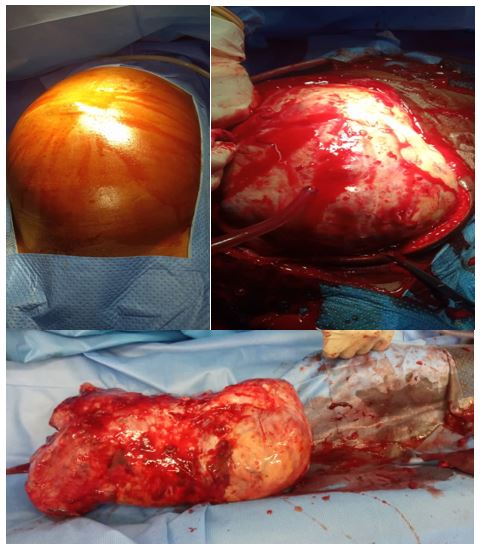 Mucinous ovarian cystadenocarcinoma is a malignant epithelial tumor of the ovary corresponding to class B1 of the FIGO histological classification [7]. It represents 15% of all ovarian tumors, coming second after serous cysts [8]. It is usually found in women during genital activity, rarely before puberty and after menopause. In a study of 15 cases, CHAITIN [17] found an average age of 50 years with extremes of 13 to 79 years. Our patient is 14 years old and therefore one of the extreme situations.

Mucinous cystadenocarcinoma is usually unilateral (94%). This is the case with Miss N, in whom the contralateral ovary was unharmed and macroscopically healthy. Ovarian cysts are considered large when the diameter is between 5 and 15 cm [8] or between 10 and 20 cm [9]; and are said to be giant when the diameter exceeds these respective limits. The largest cystic ovarian tumor weighed 137.4 kg and was removed intact by O'Hanlan in 1994 laparotomically [10]. Another giant mucinous tumor (64 kg) with foci of well-differentiated adenocarcinoma has been described by Poole et al. in a morbidly obese woman [11]. In our patient, she was neither obese nor elderly and presented a giant cyst whose diameter greatly exceeds the limits (28 cm long axis). On the clinical level, it is imperative to make the differential diagnosis in front of the bulky abdominal mass. Among these pathologies one can include an uterine hypertrophy (pregnancy, fibromyomatosis); pelvic endometriosis; (pregnancy, abdominal cysts); abdominal pregnancy; urinary retention (full bladder); intestinal tumors; hydronephrotic kidney; pelvic retroperitoneal tumors; increased obesity; ascites; uracan cyst; mesenteric cyst; abdominal cocoon [12]; and echinococcosis [13], among others [14-16]. Although tumor markers may be a useful tool for the differential diagnosis of malignant cysts, some authors have described elevated levels of these markers in patients with benign tumors. Cevik and Guldur reported a 13-year-old abdominal enlargement and pain due to a giant mucinous cystadenoma (40 × 30 × 20 cm) in the left ovary. Levels CA 19-9 and CA-125 were elevated, but -fetoprotein and human chorionic antigen were normal [15]. Gorgone et al. described a 17-year-old female patient with abdominal pain, vomiting and fever associated with a giant mucinous cystadenoma (20 × 14 × 6.5 cm) in the right ovary [14]. Jones et al. laparotomy removed a giant mucinous cystadenoma (21kg) from the right ovary detected in a 52-year-old patient with morbid obesity and acute abdominal pain [8]. Willems et al. reported two 15-year-old girls with giant benign ovarian tumors (teratoma and cystadenoma) with different clinical features and elevated tumor markers [16]. In our patient, the giant ovarian tumor was multilocular with various internal solid masses associated with cystic pockets and the anatomopathological examination revealed the diagnosis of cystadenocarcinoma Chakrabarti et al. described two cases of benign wall nodules suggesting sarcomas in ovarian mucinous cystadenomas; one of them was a giant mass (22 × 18 cm). In both cases, the women described a progressive increase in the size of the abdomen associated with abdominal pain [14]. The interval between the onset of symptoms and the stage of the tumor is a major concern. In our developing countries, delay in diagnosis is common. Nevertheless, the symptoms frequently develop insidiously and with a poor and usually banal clinical picture. It should be noted that the delay in detecting ovarian cancer has a direct relationship with poor results [18], but some examples of long-term localized development have been reported Our patient presented with an increase in abdominal volume which was asymptomatic at the start before triggering abdominal pain, nausea, vomiting and moderate dyspnea. She will only have consulted after 18 months of evolution.

The delay in consultation was the cause of a delay in diagnosing a giant cystadenocarcinoma in a 14-year-old pubescent girl with the presence of secondary sexual characteristics in a developing country.

A tumor removal was performed laparotomically and allowed the tumor to be resected. Chemotherapy is envisaged with 6 courses of cisplatin and cyclophosfamide.