Granulomatory Mastitis: A histological benign lesion with a malignant Radioclinical profile: About 3 Cases

Copyright: This is an open-access article distributed under the terms of the Creative Commons Attribution License, which permits unrestricted use, distribution, and reproduction in any medium, provided the original author and source are credited. Copyright © 2020; NIANG D

Granulomatous mastitis is characterized by an inflammatory lesion of the breast lobules without caseous necrosis and without microorganisms. It has a probable immunological origin by analogy to thyroiditis or granulomatous orchitis. Frequently the lesion presents itself in a clinical and mammographic form raising suspicion of a malignancy. We report 3 observations of granulomatous mastitis confirmed histologically whose clinical and radiological presentations clearly pointed towards malignancy. This lesion constituted in our three cases an example of radio-clinical and histological discrepancy.

A patient aged 26 years, was received for a mastodynia evolving for 3 weeks with a notion of fistulous discharge at the level of the right breast. She was nulligest without contraception or a family history of breast pathologies. The physical examination found no fever and the general condition was preserved. Locally, a mass of about 3 cm of long axis was noted at the level of the supero-external quadrant with a pertuis next to it allowing a puriform liquid to weld. There were no axillary lymphadenopathies. The bacteriological examination of the discharge fluid was sterile. The mammography performed with an ultrasound complement concluded that the mass was 35.7 mm in diameter classified ACR 3 (Figure 1). 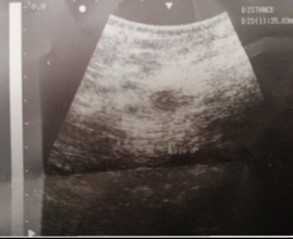 The chest X-ray was normal. Histologically, 8 biopsy carrots were communicated, entirely included in a paraffin block, examined on 3 levels of sections with the hematoxylline-eosine staining. The examination found destroyed breast tissue, replaced by an inflammatory granulomatous infiltrate. These granulomas were composed of lymphocytes, plasma cells, epithelioid cells, giant Langhans type cells, taking a follicular disposition; there was no caseous necrosis. The patient was on non-steroidal anti-inflammatory drugs (Diclofenac 75 mg per day) combined with antibiotic therapy based on amoxicillin clavulanic acid at a rate of 1g 3 times a day. This treatment was started for 3 weeks with a good evolution and regression of the mass then disappearance of the skin fistula. With a 7 month follow-up, the patient shows no signs.

The patient was pregnant in the 2nd trimester of pregnancy, third gesture, second, aged 36 years. She was seen in consultation for a right breast mass evolving for 3 months progressing rapidly and symptomatically marked by insomnia pain. The physical examination found a mass of the upper quadrants fixed relative to the superficial and deep planes. The facing skin was retracted with an orange peel appearance and 3 zones of fistulization (Figure 2). 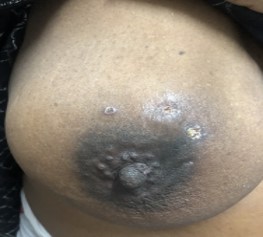 The breast ultrasound had objectified a single tissue mass, hypoechogenic, heterogeneous, poorly limited with irregular contours, measuring 57 mm, sitting at the level of the upper-internal quadrant of the right breast and presenting calcifications. (Figure 3). 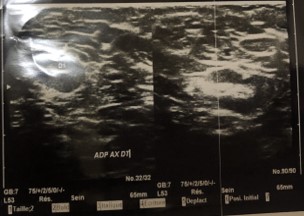 First, a breast aspiration scan was first performed showing atypical epithelial hyperplasia on a polymorphic inflammatory background with some giant cells. The biopsy concerned 11 carrots completely included in a paraffin block examined on 3 levels of sections with the hamatoxylline-eosine staining. The histological examination was superimposable on all of the samples and showed a granulomatous inflammatory breast parenchyma. The lobular canals and canaliculi were either destroyed, replaced by granulomas composed of giant Langhans type cells, epitheloids of lymphocytes of plasma cells but also of neutrophils. There were no atypical cells in the residual milking canaucx. Absence of caseous necrosis. 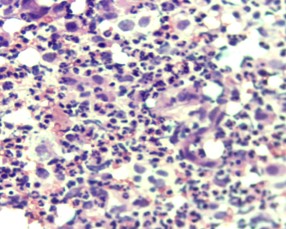 Mrs. N. 33 years old with no particular history, with three healthy children living on oral contraception, received in the cancer department for a tumor of the right breast that had been painful and rapidly growing for 3 weeks. The mass was retractable, attached to healthy skin with no puncture area. There was an associated homolateral axillary lymphadenopathy. The mammography with its ultrasound complement showed a radiological aspect in favor of a tumor infiltration with malignant potentiality of the right upper quadrants of approximately extended on all the quadrants of the breast and associated with a right lymphadenopathy measuring 5.3 mm with other homolateral axillary small size lymphadenopathies. The lesion was classified ACR 5 indicating an emergency biopsy. Faced with the clinical and mammographic presumption of malignancy of the lesion, a thoracoabdomino-pelvic CT scan had been performed showing diffuse densification and moderate thickening of the cutaneous plane of the right mammary gland associated with axillary lymphadenopathy. This computed tomography also showed two pulmonary micro nodules suspected of secondary neoplastic locations.

Histological examination showed an inflammatory granulomatous lesion instead of an unexpected tumor lesion. On all of the biopsy carrots, the galactophore channels and canaliculi were destroyed, replaced by an inflammatory infiltrate composed of giant cells, epitheloids of plasma cell lymphocytes but also of neutrophils.

Associated with an infiltrate of CD 68 granular cells positive on immunohistochemical examination (Figure 6a et 6b) the P63 antibody was positive on the residual milk ducts not destroyed by the inflammatory infiltrate (Figure 7).

there is no caseous necrosis. 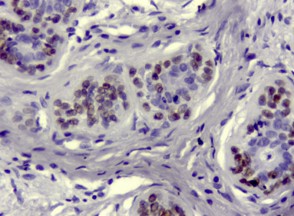 Granulomatous mastitis was described in 1966 by SMADJA [3], by analogy to granulomatous prostatitis of TANNER and Mc DONALD described in 1943. The term granulomatous mastitis is taken up by KESSLER and WOLLOCH [2], in 1972 which define another type of abscess about five sightings (Book breast). The lesion generally occurs in young women during genital activity or during pregnancy. The etiopathogenesis of mastulosis granulomatosis is not a friend, however, the hypothesis of an autoimmune process is accepted by many authors as being the most likely. It is a cell-mediated immunity, a type of delayed hypersensitivity. Their arguments are based on the importance and persistence of the inflammatory lymphoplasmacytic infiltrate. PONS made the same assumption that the condition is often idiopathic and is triggered by an extrinsic antigen [9]. For others like BINELLI et al. [7], a tissue or infectious cause is incriminated such as the responsibility of corynebacteria as possible pathogenic agents. The hypothesis of extravasation of glandular secretions in the connective tissue of the lobule was put forward by Fletcher and Haagensen; this would explain the inflammatory reaction to a foreign body by involvement of the ductal epithelium [6]. In addition, MG occurred in a pregnant woman, especially in the second trimester of pregnancy as in our second observation. The epidemiology of MG finds a frequent association with pregnancy. In fact, affected patients have generally already given birth and most of them have had this condition after a short delay in the postpartum period. MG is associated with the use of estrogen-progestin contraceptive pills and breastfeeding. On the other hand, several authors have not found a relationship between the development of MG and these clinical data. TRABELSI in his observation discussed pregnancy as the triggering factor for MG and breastfeeding leading to recurrence based on the role of hyperprolactinemia with or without galactorrhea in the genesis of MG [8]. Birth control pills could similarly play a role in stimulating breast secretion [9]. Nulligeste women can be affected by the affection. In 2014, Fahmy [10], described a case of mastitis associated with knotty erythema in a nulliparous woman. Clinically, MG is in the form of a firm, inflammatory and ill-defined mass, often painful, which can secondarily be abscessed as in our observations. The involvement generally concerns a single breast but can be bilateral. It is a badly limited unilateral nodular lesion, with a more peripheral than juxta-areolar seat, sometimes bilateral, which can abscess. The skin looking at the lesion can be inflammatory, or even the site of an attraction [10]. Two of our three patients had fistulization after a few weeks of onset of the disease. This clinically pejorative aspect immediately points to a strong suspicion of malignancy by the attending physician, which can trigger an excessively extended tension assessment. The diagnosis of granulomatous mastitis is not based on radiology. Indeed lesions are difficult and systematically orienting towards malignancy. The mammography is not very specific and in no case should dispense with histological proof of the nature of the lesions by a surgical biopsy. In the nodular forms, it can be faulted given the density of the breasts in young women. It evokes cancer because it shows hyperdensity of the breast, causing architectural disorganization, irregular boundaries, infiltration of subcutaneous fatty tissue, thickening of the skin, a decrease in clear subcutaneous space and, the absence of microcalcifications [1]. Breast ultrasound is useful in abscessed clinical forms, in order to assess the size of the lesions and to better understand the type of drainage to be performed (puncture, surgical flattening). In clinical nodular forms, it may show criteria of malignancy such as absorption of the ultrasound beam at the posterior part of the lesions. It is nonspecific in the context of MGI, and will in no way avoid the need for surgical biopsy [1]. Contrary to the pejorative presumptions of the radioclinical examination, the histology always surprisingly (starting with the pathologist himself !) Is decisive and confirms the diagnosis of this inflammatory disease. Macroscopically, the lesion appears as an irregular, greyish, soft multi-focal or pseudo-tumor abscess, sometimes necrotic with bluish dilated galactophores containing pericanalar granulomas made of lymphoplasmocytic infiltration, and giant multinucleated cells spumous and epitheloid, to which is associated with significant fibrosis. The surrounding lobules are often the site of mild galactophoric ectasias and tend to lymphoplasmocytic infiltration [5]. However, granulomatous mastitis is very close histologically to plasmocyte mastitis and constitutes two entities to be differentiated. They have in common the formation of an inflammatory granuloma. The topography of the initial involvement is different, however. Plasma cell mastitis is centered on the galactophores, characterized by ductal dilation. Granulomatous mastitis is thought to be the result of lobular dilation with accumulation of secretory products in the acini, then rupture and inflammatory granuloma. The treatment of granulomatous mastitis is variable depending on the stage of the disease. In the acute stage antibiotic and anti-inflammatory treatments are indicated. At the chronic stage surgery is necessary. Recurrent forms are described and their management by corticosteroid therapy is recommended [5,11,12]. An evacuation of the microbial pus using a large needle or by a small cutter incision can be carried out in front of a collected abscess. A minimally invasive procedure is recommended and under local anesthesia [10]. Surgery is as important a risk factor for recurrence of abscesses as tobacco [13]. In plasma cell mastitis, surgery is considered to be at high risk of fistula [14-15]. Some authors such as DeHertogh et al. [17] have obtained good results with corticosteroid therapy. This can be prescribed as monotherapy [16], on the first line before surgery or after failure of nonsteroidal anti-inflammatory drugs (NSAIDs) or surgery.

Granulomatous mastitis is a rare benign inflammatory condition, the clinical and radiological presentation of which points to inflammatory breast carcinoma. Histological examination confirms the diagnosis. When associated with pregnancy, its evolution will be marked by the recurrence explained by hyperprolactinemia.