Welcome to Research Journal of Neurology and Neuro Disorders

Copyright: This is an open-access article distributed under the terms of the Creative Commons Attribution License, which permits unrestricted use, distribution, and reproduction in any medium, provided the original author and source are credited. Copyright © 2019; Thoams Mathew

Abstract: Red Ear Syndrome (RES) is a rare condition, first described in 1994 by Lance. It is characterized by burning pain, warmth, and erythema of the auricle. Here, we report the case of a young woman who manifested symptoms of red ear syndrome 3 years prior to those of multiple sclerosis (MS). She also had a history of episodic infrequent migraine and anxiety disorder. Association of Multiple Sclerosis (MS) with Red Ear Syndrome is hitherto unreported. We propose the involvement of Neuropeptide Y (NPY), or a dysfunction thereof, as the underlying pathophysiological mechanism to explain the concurrence of MS and RES, along with other presenting co-morbidities.

Summary: Proposing the association of multiple sclerosis with red ear syndrome and involvement of Neuropeptide Y.

Red Ear Syndrome (RES) is a rare condition, first described in 1994 by Lance [1]. It is characterized by burning pain and warmth of the auricle accompanied by ipsilateral erythema [1]. Here, we present the case of a young woman who had red ear syndrome as a possible early manifestation of multiple sclerosis. Association of Multiple Sclerosis (MS) with Red Ear Syndrome is hitherto unreported.

A 29-year old woman had a three years history of episodic bilateral erythema, concentrated in the anterosuperior lobe of the external ear, accompanied by warmth along the area of redness and occasional tightness posterior to the auricle. The majority of her episodes were triggered by hunger. These attacks were also occasionally precipitated by stretching and brushing the hair. The episodes, which were exacerbated by hunger, were relieved by consuming carbohydrate-rich foods, particularly rice. A spontaneous episode usually lasted for 10-15 minutes, and each hunger-triggered episode lasted until after the consumption of carbohydrate-rich foods. She also had very infrequent migraine attacks independent of her red ear syndrome attacks. She also suffered from anxiety disorder, along with spontaneous and stress-triggered palpitations. Notably, neither red ears nor migraine was temporally correlated with episodes of stress or palpitations. She recently developed numbness of lower abdomen, accompanied by numbness and tingling of both distal upper limbs and back of the neck. On examination, there was a decrease in vibration sense in the right upper limb. She also had brisk deep tendon reflexes on both sides with flexor plantar response. Other neurological examinations were normal. Her brain MRI showed periventricular and juxtacortical T2W hyperintense lesions and a single lesion in the spinal cord at the C6 level. There was no contrast enhancement. Testing for anti- NMO and anti-MOG antibodies was negative, while her CSF oligoclonal bands were positive. Multiple Sclerosis was diagnosed based on McDonald 2017 criteria and she was treated with dimethyl fumarate (DMF). She initially experienced flushing upon initiation of DMF. Remarkably, the episodes of migraine and red ears reduced in frequency and intensity after initiating DMF. Her MRI brain after 6 months showed a decrease in the size of T2 hyper intense lesions. 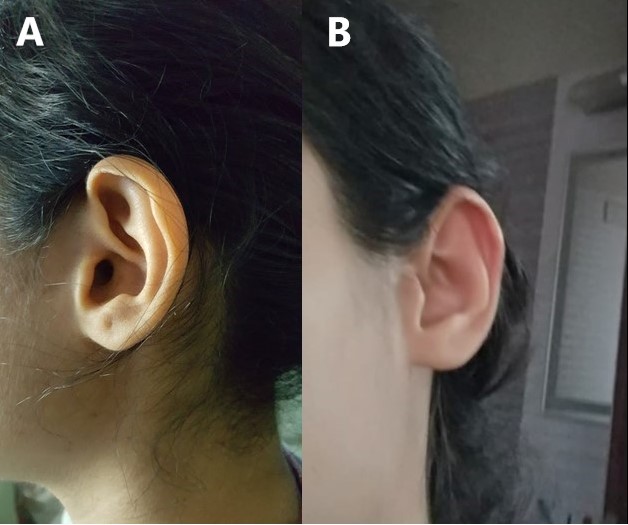 Red Ear Syndrome (RES) is a rare condition first described by Lance in 1994 [1]. RES can be idiopathic RES or secondary RES. Idiopathic RES can be further sub-classified into isolated RES and RES associated with primary headache disorders [2]. The previously reported secondary causes of RES include upper cervical spine abnormalities, cranial and cervical neuralgias, temporo-mandibular joint dysfunction, thalamic syndrome, herpes zoster and pleomorphic adenoma of carotid artery [1,2]. Association of RES with MS is unreported. RES usually presents with episodic reddening, warmth and pain of the external ear, although some cases without any pain have also been reported [3]. The episodes can be spontaneous or triggered, and can occur unilaterally or bilaterally. Bilateral attacks are present in 49% of RES associated with primary headache disorders and 19% of isolated RES [1]. Common triggers include heat, rubbing the ear, physical exercise and neck movement, with each patient presenting with some or all of these triggers [1,2]. Noting the innervation of the anterosuperior lobe of the auricle by the auriculotemporal branch of the trigeminal nerve and association of RES with primary headache disorders, a dysfunction of the trigeminal autonomic circuits, by hyperactivation of the parasympathetic tone accompanied by suppression of the sympathetic tone, has been proposed in the pathogenesis of RES [1].

In the case described, the patient had been having episodes of RES for three years preceding the defined symptoms of MS and a diagnosis of MS was reached later when new symptoms appeared. Whether red ear syndrome can be a preliminary manifestation of MS is unknown. However, a possible correlation could be drawn from the involvement of Neuropeptide Y (NPY) in autonomic control, glucose homeostasis and Multiple Sclerosis. NPY is secreted at times of hunger and NPY mRNA overexpression upon fasting has been observed in animal models [4,5]. NPY is further known to increase parasympathetic activity and decrease sympathetic activity, and also causes vasodilatation mediated via the NPY Y1 receptor and nitric oxide [6,8]. NPY is also a known immunomodulator, reported to influence the regulation of autoimmunity, and specific Single Nucleotide Polymorphisms (SNPs) on NPY gene have been noted to be more common among MS patients compared with controls [9]. Our patient also suffered from anxiety disorder, and SNPs on NPY gene have also been correlated with increased susceptibility to anxiety disorder [10]. Whether RES is truly secondary to MS or a mere association with MS is unclear, but the aforementioned observations hint at a shared pathophysiology involving NPY, or a dysfunction thereof, for the hunger-triggered RES episodes, MS, and anxiety in our patient. The observed decrease in the size of lesions along with the amelioration of RES episodes in our patient after initiating DMF point to an association of RES with MS.

As many physicians are unaware of RES, these symptoms might have been neglected and a proper evaluation may never have been done leading to under reporting [1]. It will be worthwhile to have further studies evaluating the prevalence of RES in Multiple sclerosis compared with the prevalence of RES in the general population to ascertain whether there is high prevalence of RES in patients with MS. It would also prove useful to have further studies to explore the underlying pathophysiology of co-morbidities of MS, such as RES and Migraines, with a focus on the involvement of neuropeptide Y. It could pave the way for a better understanding of the aetiology of MS and possibly identifying early manifestations of MS, thereby aiding early diagnosis and treatment.